PROTESTS AGAIN took place in Hong Kong on Sunday, with thousands attending a march from to Chater Garden to the Sun Yat-Sen Memorial Park in Sheung Wan. Some demonstrators proceeded past the Sun Yat-Sen Memorial Park to China’s Liaison Office in Hong Kong. According to Ventus Lau, the primary organizer of the demonstration, 11,000 participated in the march, while Hong Kong police claim that only 5,000 participated. 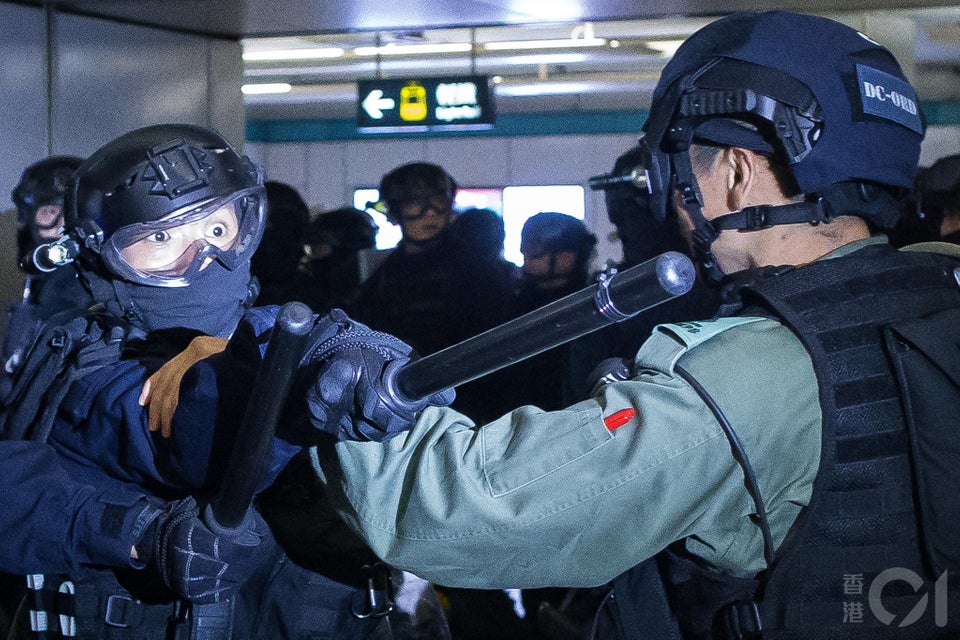 Image widely circulated of a police officer with a ring-like object attached to his baton. Photo credit: HK01/LIHKG

Hong Kong police refused to approve both Saturday and Sunday’s demonstrations, making both demonstrations “unlawful gatherings.” Demonstrators may face up to five years in jail for participating in “unlawful gatherings,” and dozens were arrested on both days. Evidently, however, the threat of imprisonment is no longer insufficient to deter Hong Kong protesters at this point. At least 49 were arrested after just Sunday’s protests.

As with Saturday’s demonstration, assaults by police on demonstrators took place after nightfall. As part of their dispersal operation, police fired tear gas, rubber bullets, sponge rounds, and pepper-spray balls at demonstrators. Much attention has gone to the large volume of tear gas fired by police, which affected elderly homes in the area.

Images widely circulated online include photos of protesters developing skin conditions from tear gas, videos of police beating unarmed, detained protesters with batons, clips of tear gas canisters were fired directly at protesters, and an image which shows that a member of the police force attached a ring-like to his baton. As with previous protests, a number of police officers covered up their ID numbers to prevent from being identified.

Images also show that projectiles fired by police were sufficient to break apart safety helmets worn by demonstrators to protect themselves, as well as objects used makeshift shields used by demonstrators. Numerous blazes broke out during the demonstration, usually due to refuse that caught fire. These were extinguished by demonstrators or firefighters.

With continued accusations that the Hong Kong police have been colluding with individuals thought to be triad members that attacked demonstrators in Yuen Long last weekend, footage showing police meeting with purported triad members and footage showing pro-Beijing lawmaker Junius Ho shaking hands with individuals thought to be triad members have further been outraging of demonstrators. So, too, have comments by the Hong Kong Junior Police Officers’ Association referring to protesters as “cockroaches” after the defacing of Ho’s parents’ graves. Such comments were later condemned by the Civil Human Rights Front, the primary organizer of mass demonstrations to date, as “hate speech.” 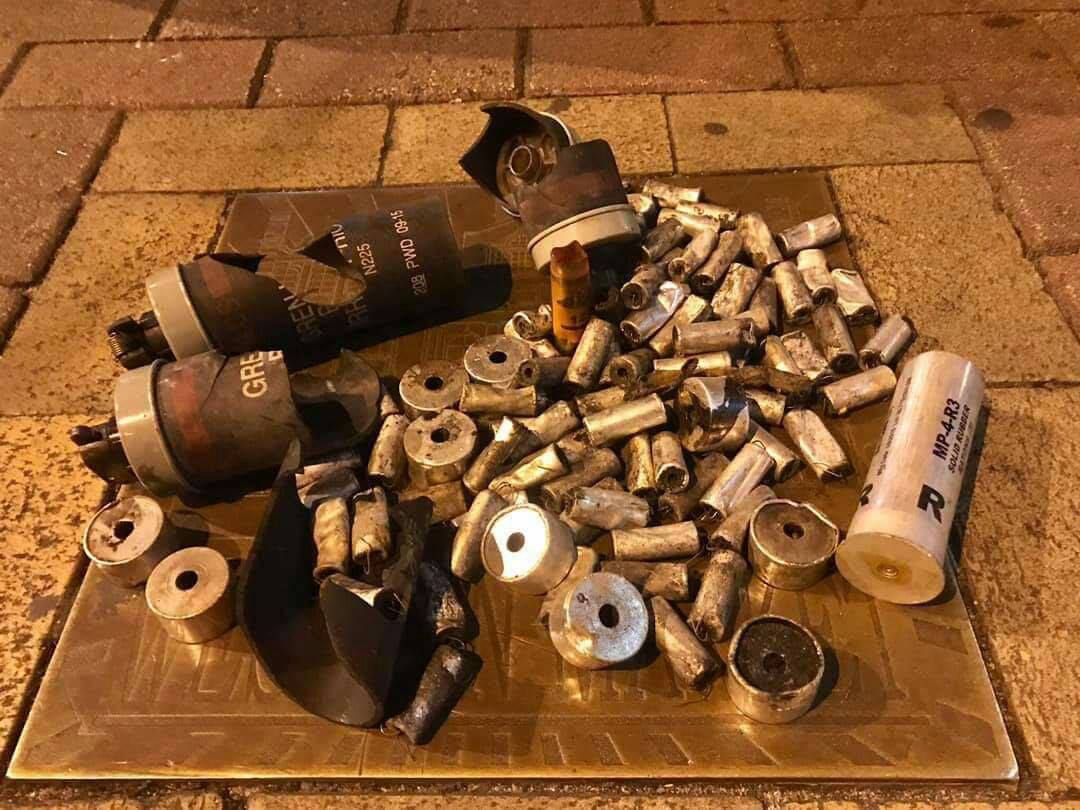 On the other hand, Hong Kong police continue to maintain that it is primarily demonstrators who were violent, claiming that protesters attacked police with objects including traffic cones, glass bottles, and barriers, and poured corrosive liquid onto police officers. Hong Kong police also claim that a bow and arrow discovered lying on the ground during demonstrations was used to shoot arrows at police officers.

In the wake of the three consecutive days of demonstrations, China’s Hong Kong and Macau Affairs Office (HKMAO) held a press conference on the situation in Hong Kong on Monday afternoon. This would be the first press conference of its type after the 1997 Handover.

Due to this fact, there was much anticipation before the press conference as to whether it would announce any shift in policy. Nevertheless, what was announced at the press conference by HKMAO spokesperson Yang Guang was simply that the Chinese government supported the Lam administration in taking legal action against protesters, emphasized that the Chinese government still saw “One Country, Two Systems” as the central principle of governance for Hong Kong, but that attempts to split “One Country” would not be tolerated. In response to a question by a reporter from Chinese state-run media outlet Xinhua News, Yang suggested that foreign forces were behind the present protests.

While Yang’s comments announced no shift in policy, they have generally been understood as downplaying the possibility of the People’s Liberation Army (PLA) being called on to forcibly put down protests. The Chinese government’s priorities may still be elsewhere and, as such, the Chinese government still intends for the Lam administration and Hong Kong police to handle the present protests. Indeed, one notes that the Hong Kong riot police have to date generally been sufficient in suppressing protests, but simply not preventing them from continuing to take place.

The possibility of the People’s Liberation Army intervening in present protests in Hong Kong was raised after public comments by the Chinese Ministry of Defense last week suggesting that the PLA could be deployed in Hong Kong if it were requested to by the Hong Kong government. 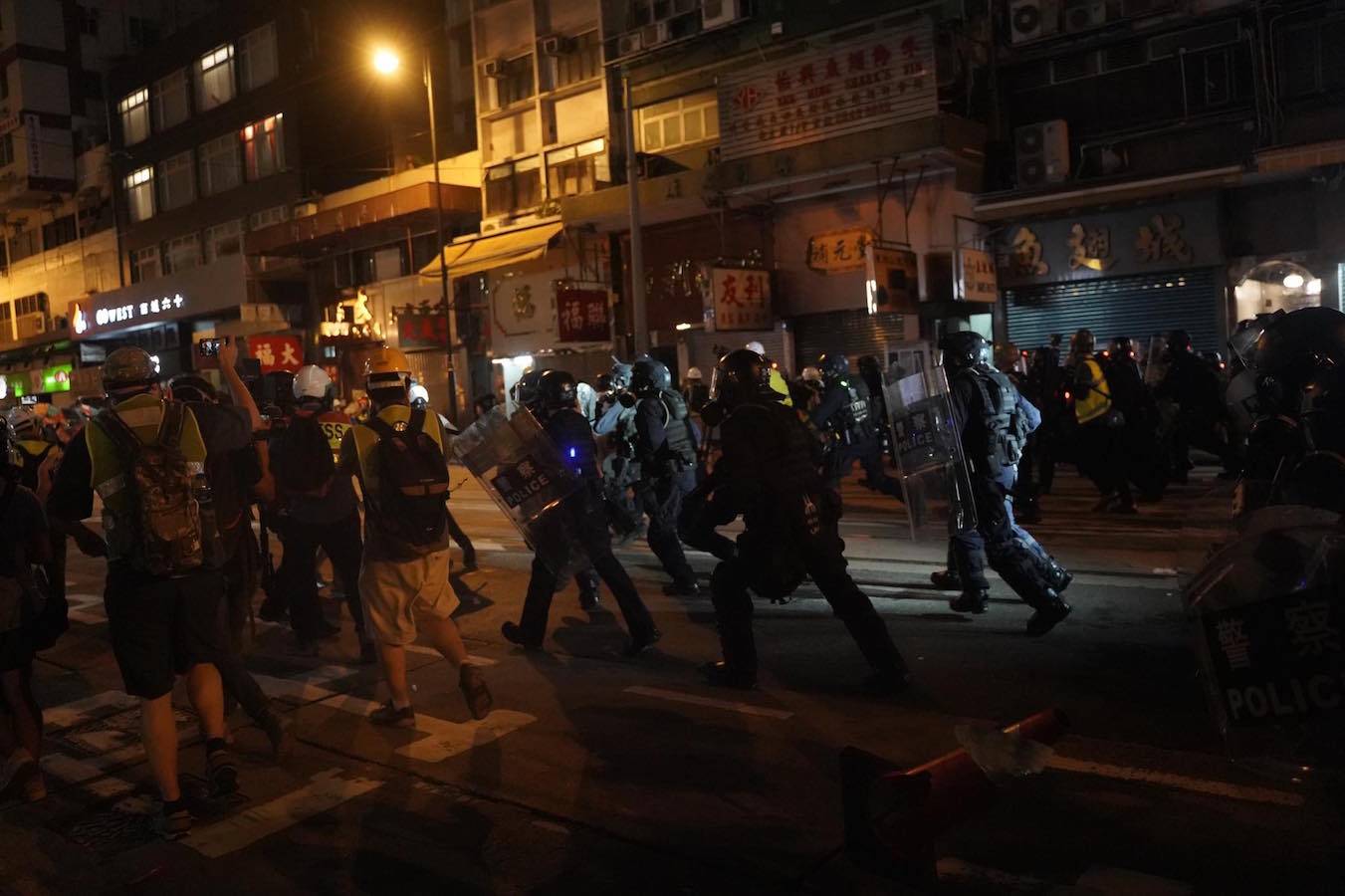 Yang’s comments would seem to suggest the contrary. Yet one also notes that alarmist rhetoric against the protests in Hong Kong is on the rise from state-run media outlets including the People’s Daily, which published an editorial on Monday stating that the Civil Human Rights Front is a pro-Hong Kong independence organization. In a similar vein, Global Times editor-in-chief Hu Xijin stated on Weibo and Twitter that the current demonstrations in Hong Kong could be seen as bordering on a “color revolution.”

Protests will continue to take place in Hong Kong, then. MTR workers are set to strike today, with plans for future demonstrations by civil servants, and other groups, as well as calls for a general strike to take place on August 5th. Although a general strike was previously declared for June 12th, most businesses continued operations that day and the strike was not paralyzing of the city as a whole. It remains to be seen if the August 5th strike will prove different. Certainly, the situation has deteriorated a great deal since June.