Is Threatening to Mobilize the PLA in Hong Kong More Than Just a Threat?

THE CHINESE MINISTRY of Defense’s chief spokesperson, senior colonel Wu Qian, stated in comments earlier today that the People’s Liberation Army (PLA) could be deployed in Hong Kong to put down demonstrations against the Beijing-backed extradition bill at the request of the Hong Kong government.

The PLA has a garrison in Hong Kong, although it is also likely that PLA troops would be deployed in Hong Kong from without. The establishment of high-speed rail lines between Hong Kong and China has, in past years, led to concerns that they could be used to rapidly deploy PLA troops from neighboring Guangdong or other parts of China into Hong Kong. Rumors that the PLA would imminently deploy in Hong Kong also circulated during the Umbrella Movement and have circulated at various times during the anti-extradition bill protest to date. however, now Chinese Ministry of Defense officials have confirmed that this is a possibility. 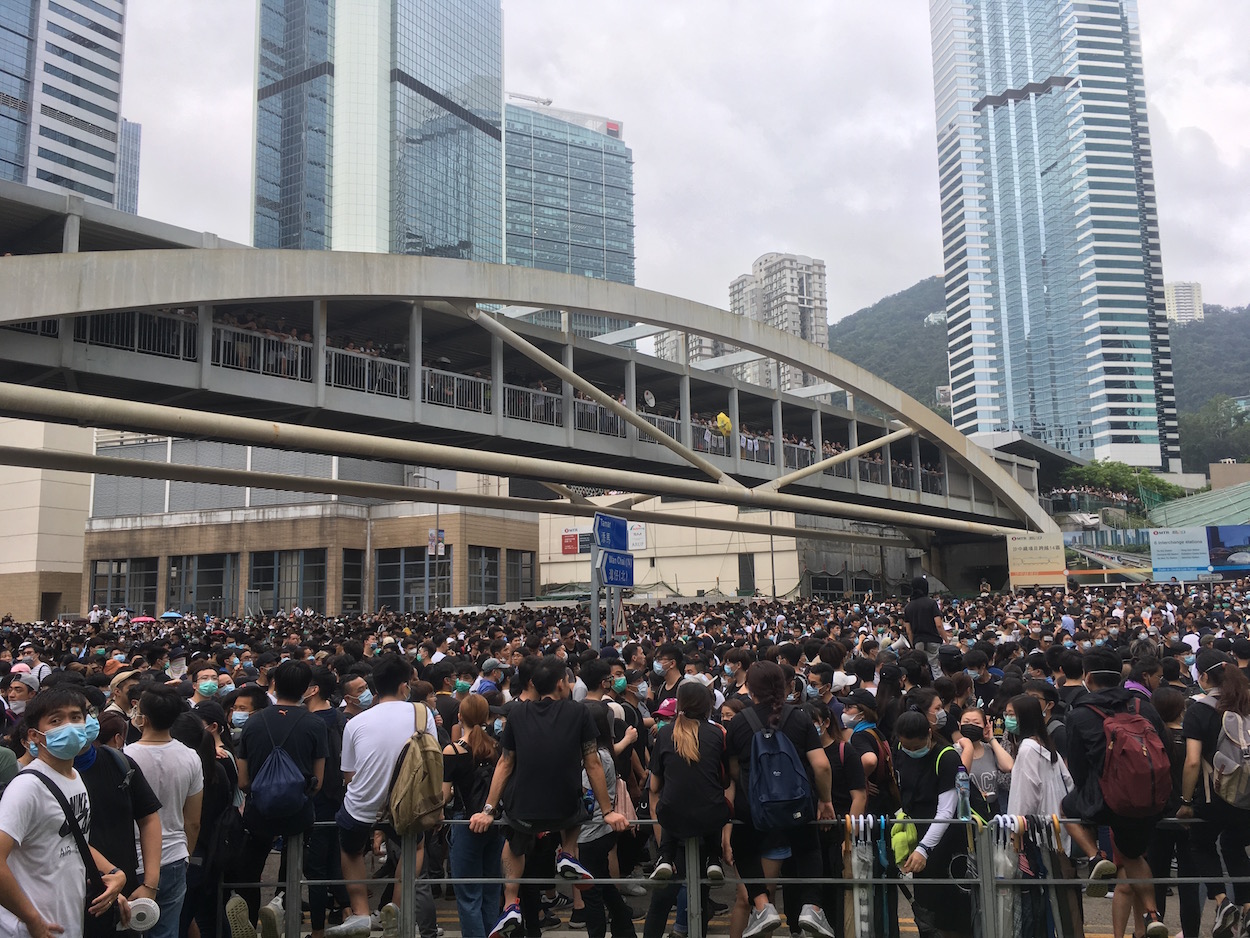 The possibility of the PLA being deployed in Hong Kong has always been, more or less, the worst-case scenario in terms of measures that the Chinese government could take to try and put down protests against the extradition bill. Some have suggested that this could possibly result in events in Hong Kong culminating in an incident on the scale of the 1989 Tiananmen Square Massacre.

A PLA newspaper released a video on July 3rd showing PLA soldiers conducting trills around Hong Kong. On the other hand, the commander of the PLA garrison in Hong Kong, Major General Chen Daoxiang, indicated in a meeting last month with American principal deputy assistant secretary of defense for Indo-Pacific Security Affairs David Helvey that the PLA garrison had no intention of leaving their garrison to take action during the current set of protests.

This position may have changed in the time since. Protest actions have escalated significantly in the wake of actions such as the attempted occupation of Hong Kong’s Legislative  Council (LegCo) on July 1st, or last Sunday’s demonstrations targeting Beijing’s Liaison Office in Hong Kong.

Some took the view that targeting the Liaison Office would result in direct reprisals from the Chinese government, seeing as this would be viewed as shifting the target of protests from the Hong Kong government to the Chinese government itself, perhaps pushing Beijing to view the movement as having crossed the line of civility. It probably is in fact true that China is increasingly the direct target of protesters, as observed in demonstrations this month not only targeting the Liaison Office but also the West Kowloon train station, the “nearest place in Hong Kong to China” because it connects Hong Kong and China by train.

The Hong Kong government, as embodied in Chief Executive Carrie Lam, has itself curiously faded from view, with Lam refusing not only to withdraw the extradition bill but also refusing to step down or even acknowledge calls for her to step down. A report from the Financial Times stated that Lam has offered to resign many times in past weeks, but that her superiors in Beijing will not let her do so. 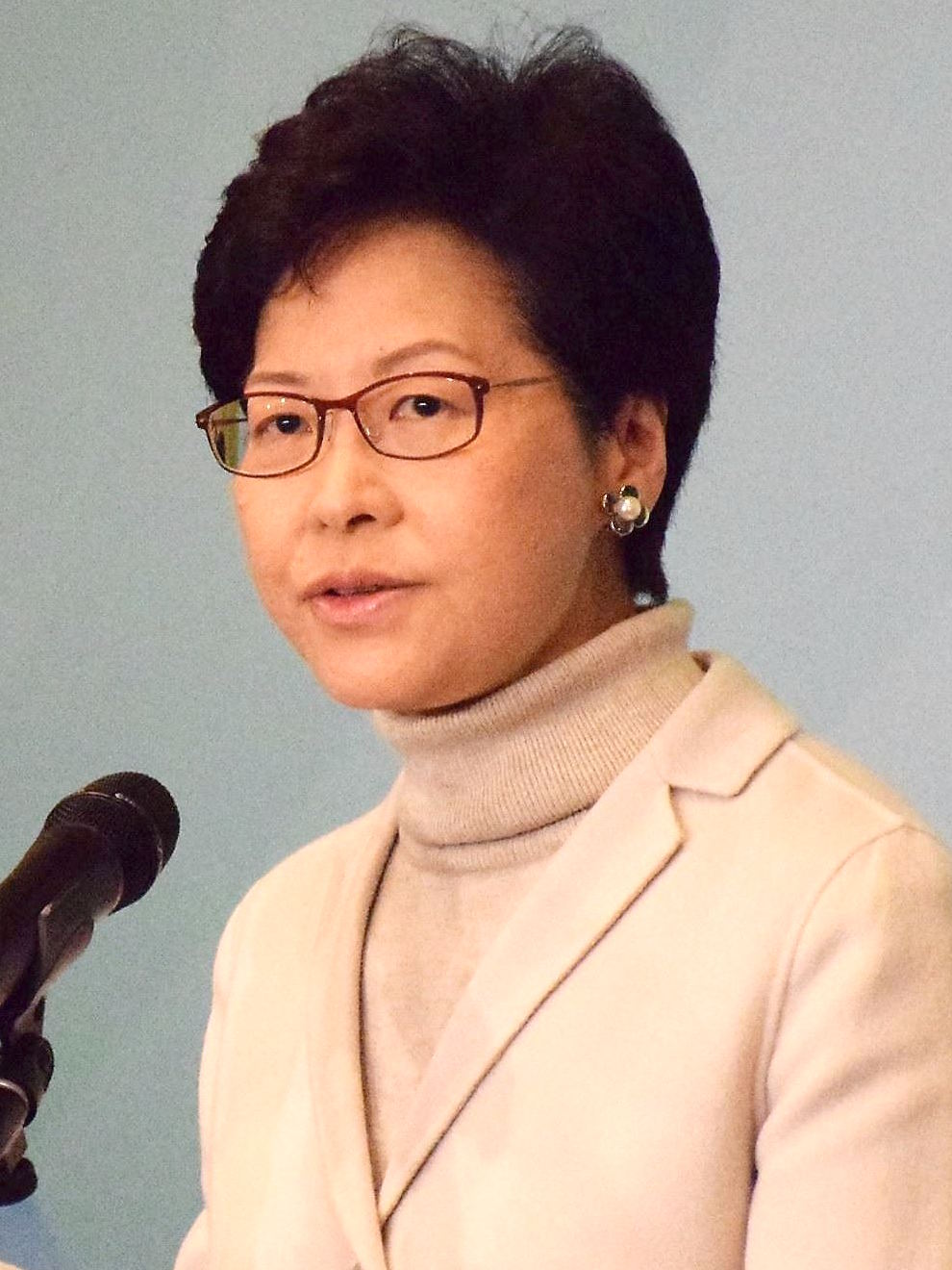 At the same time, Beijing has significantly stepped up accusations that the United States is orchestrating protests in Hong Kong from without. It is unclear whether Beijing genuinely believes this, or insists that this is the case in order depict demonstrations in Hong Kong domestically as simply attempts to undermine China from without, as a means of preventing Chinese nationals learning more about the issues at stake in Hong Kong.

Just a Threat or More than That?

THE APPLE DAILY previously reported that the Hong Kong government was considering imposing a curfew in Hong Kong, something that denied by government officials. The imposition of a curfew in Hong Kong would have few parallels outside the 1967 leftist riots and could be seen as only a step away from a declaration of martial law, something that also took place in Beijing during the Tiananmen Square protests. One notes that the death of Li Peng, the Chinese premier responsible for the Tiananmen Square crackdown was announced yesterday by the Chinese government in such terms as to suggest that Li’s actions during Tiananmen Square were still worthy of praise in the present.

As should be clear with the attacks on peaceful demonstrators in Yuen Long last Sunday by individuals thought to be triad members and the heavy use of tear gas and rubber bullets by riot police, the Hong Kong government has seen fit to brutally crack down on Hong Kongers using both legal and extralegal means. Triad members are thought to have been hired by the Hong Kong government to attack demonstrators as a means of “outsourcing” violence to non-state actors that the government can plausibly deny having links to.

But to this extent, if mobilizing gang members to attack demonstrators is insufficient to put down the current set of protests, there would seem to be few other forms of escalation available to Beijing apart from deploying the PLA.

If the Chinese government were to mobilize PLA troops to violently repress the current set of protests, it is actually not impossible that China would prefer to deploy troops who are not stationed in Hong Kong.

First, China might take the view that such troops could potentially be too sympathetic to Hong Kong society, particularly if they have been stationed in Hong Kong. This is why it is a common practice for riot police called onto violently repress protests to be mobilized from outside of the area where protests are taking place; for example, many riot police officers deployed in Taipei during the 2014 Sunflower Movement were not normally stationed in Taipei. Indeed, the many of the soldiers deployed during the Tiananmen Square Massacre came from outside Beijing, and the incident reportedly still saw some PLA army commanders refusing to comply with orders to execute student demonstrators and subsequently being removed from the chain of the command.

That being said, it is generally unlikely that PLA troops in Hong Kong would defy the orders of their superiors. PLA troops are, of course, Chinese, and it is unlikely that Chinese troops would defy the orders of their superiors. Hong Kong riot police who are themselves Hong Kongers have been perfectly happy to conduct brutal assaults on their fellow citizens so it is hard to imagine that Chinese members of the PLA will be reluctant to attack Hong Kongers. Unverified video footage suggests that the triad members involved in attacks on Hong Kongers, too, may be Chinese nationals, shipped over from neighboring Guangdong. This is thought to have occurred during the 2014 Umbrella Movement as well.

But beyond that, China may have to mobilize troops from outside Hong Kong. The PLA garrison in Hong Kong is thought to be around 6,000 individuals and protests in Hong Kong at their peak have involved more than two million individuals⁠—around thirty percent of Hong Kong’s population.

Certainly, the Hong Kong government has itself suggested that situation is of sufficient intensity to perhaps justify the intervention of the PLA, as can be observed claims by the police that the pro-independence Hong Kong National Party was involved in Hong Kong’s “largest-ever” bomb plot. Police claimed last week to have discovered high-powered explosive in a warehouse space used by the group. 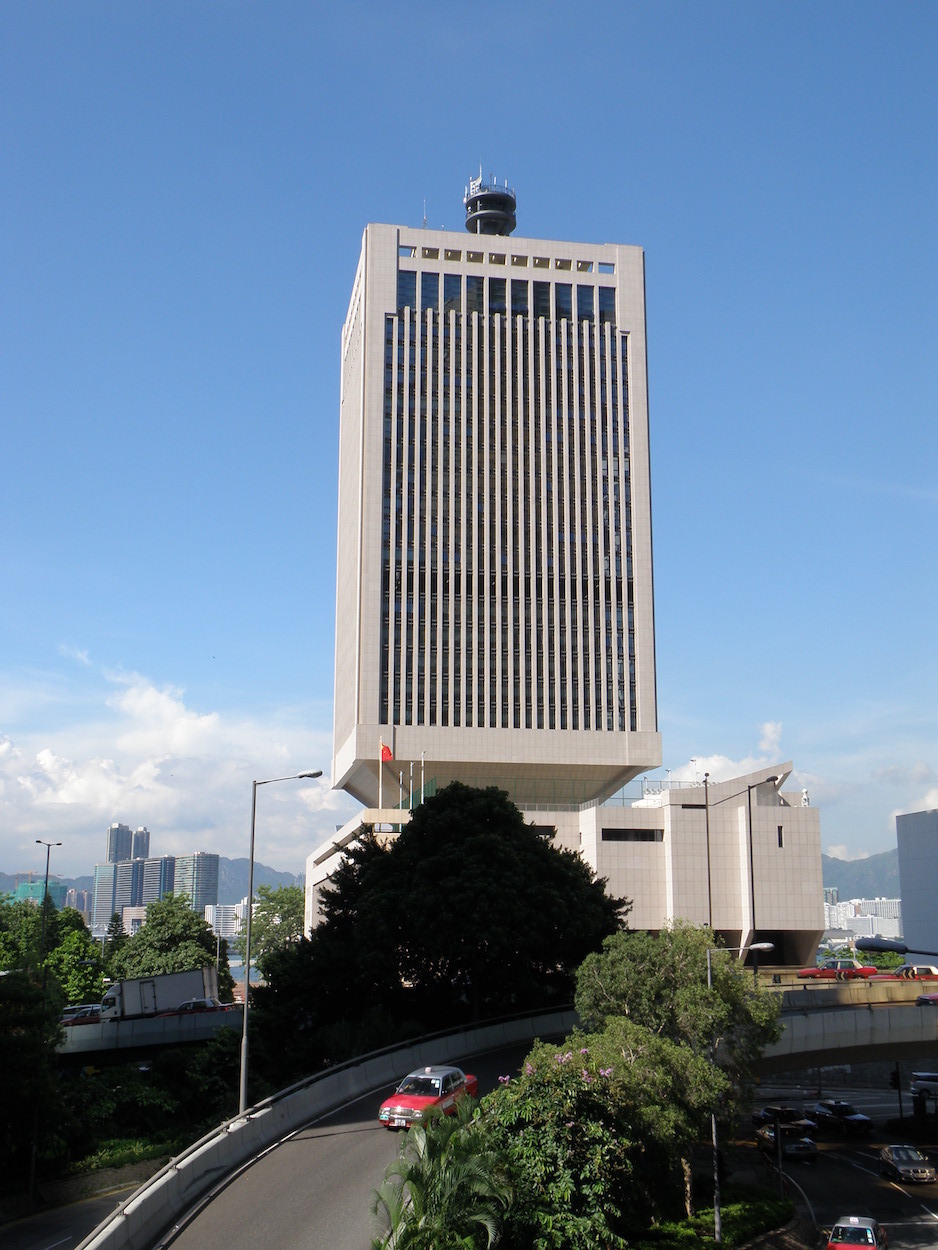 International media has sometimes also been less than helpful in its framing of how events in Hong Kong have developed, such as by referring to the attempted LegCo occupation as “violent” or by referring to occupiers as “rioters.”‘ This may have unwittingly helped contribute to the narrative pushed by the Hong Kong government that events have spiraled out of control. Such claims may eventually be used to justify the imposition of outside force.

Perhaps what is most important to keep in mind in at the present juncture, however, is that Hong Kong riot police have been sufficient to put down most demonstrations to date⁠—just they have been insufficient in preventing protests from continuing to break out.

If the Chinese government realizes this, then it would be probable that the use of PLA troops is, for now, simply a threat. For one, deploying PLA troops in Hong Kong would immediately push what is already a volatile situation over the edge, into what could potentially be a revolutionary situation. 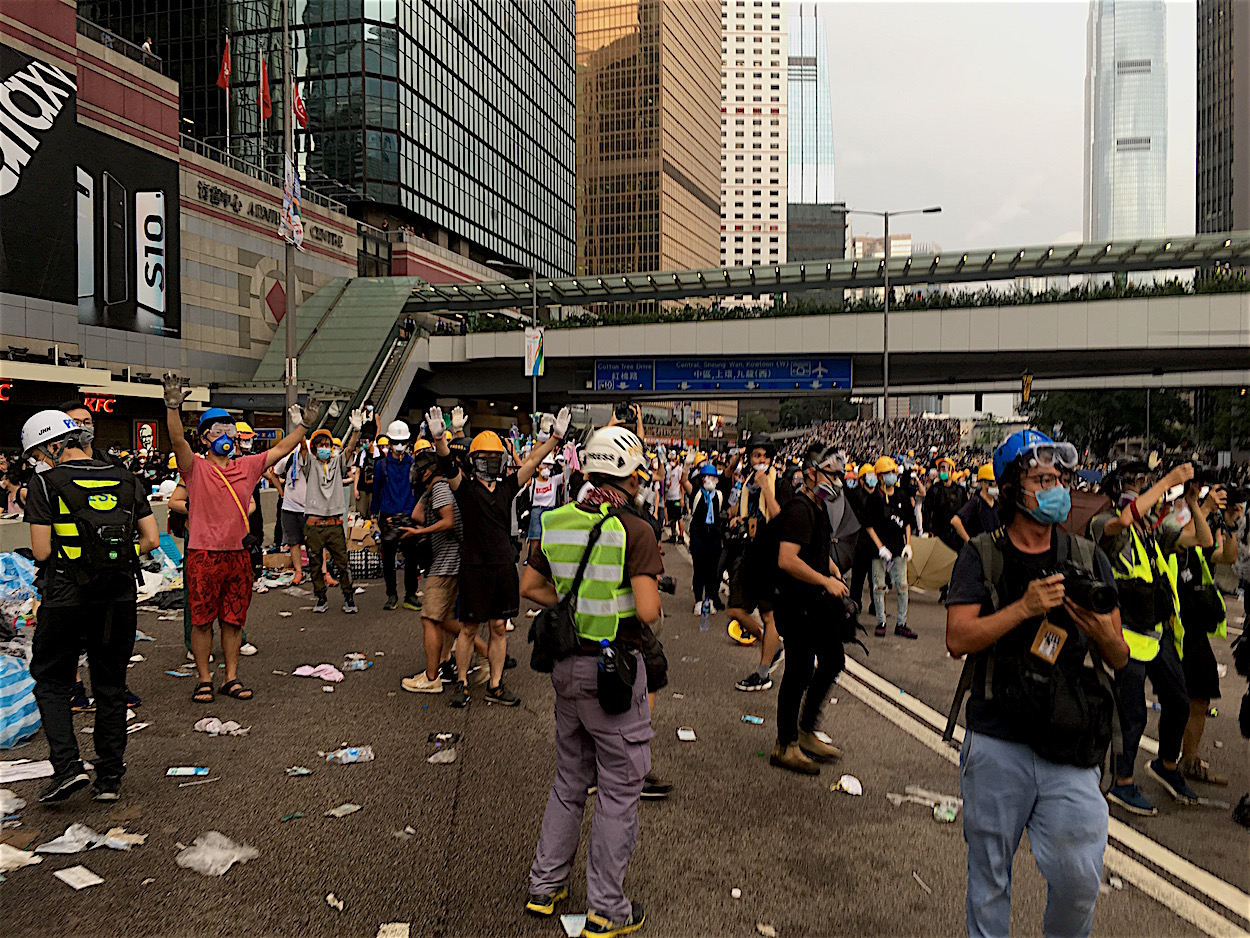 Yet deploying the PLA has been Beijing’s last resort in Hong Kong from the very beginning of protests, although many were loathe to reckon with the possibility. This threat could be one that is indeed acted upon in coming days and months, as events continue to escalate.

And the danger may be that Chinese leaders in Beijing, observing the situation from afar, will overreact, as they have on so many other occasions.