WHAT COMES NEXT for Hong Kong remains uncertain after the brief occupation of the Legislative Council (LegCo) that took place during demonstrations on Monday. Around two hundred demonstrators entered LegCo, but with police breaking into the complex, the majority of demonstrators decided to withdraw. Protesters that initially withdrew eventually returned to drag any of the demonstrators who refused withdraw along with them.

Demonstrations commemorated the July 1st anniversary of the 1997 Handover of Hong Kong from British control to Chinese control but were another occasion for protest against the extradition bill that the Hong Kong government was attempting to pass before its temporary suspension last month. Protesters, however, continue to demand the full withdrawal of the bill, raising the fact that the bill could still be passed into law on a relatively quick basis—in spite of claims by the Hong Kong government that they intend to let the bill die a natural death and, consequently, there is no need to formally withdraw the bill. 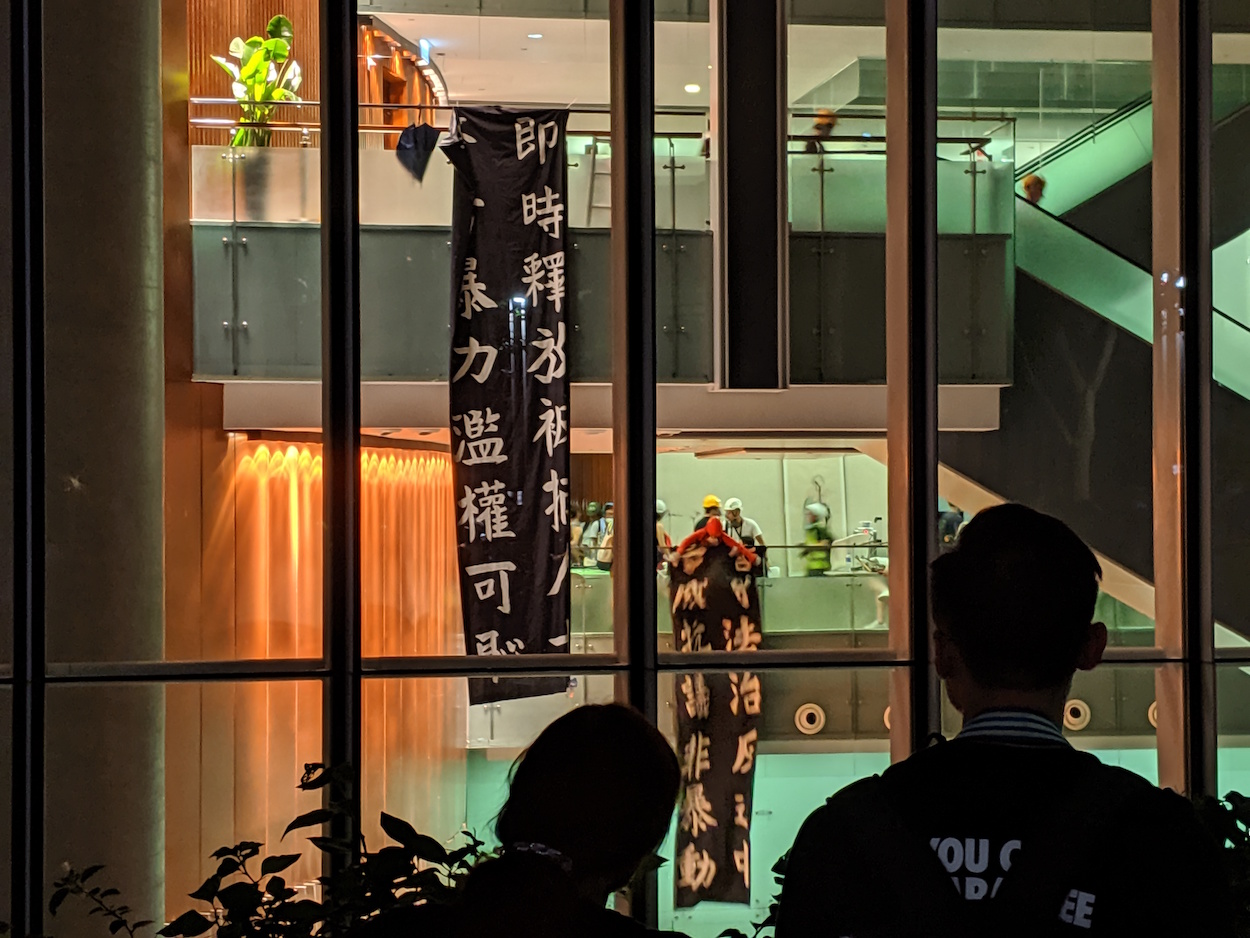 After such heated demonstrations, it is unlikely that Hong Kong will see another round of high-intensity clashes with the police right away. Nevertheless, what should be apparent at this juncture is that in the aftermath of the brief occupation, a discursive battle is being fought between pro-democracy activists and government officials regarding the framing of the occupation attempt.

Government officials such as Hong Kong Chief Executive Carrie Lam and Commissioner of Police Stephen Lo have, unsurprisingly, attempted to depict activists as a violent and irrational mob, pointing to the property damage caused by activists in the LegCo or suggesting that demonstrators may have stolen confidential documents or files while inside LegCo. Likewise, Hong Kong government officials suggest that protesters are continuing to demonstrate for no reason because of the fact that the extradition bill has already been suspended.

On the other hand, pro-democracy activists such as Joshua Wong, among others, have pointed to the fact that demonstrators were pushed into taking an extreme form of action because of the refusal of the government to back down in spite of protests which, at their peak, mobilized over two million Hong Kongers into the streets—some 30% of Hong Kong’s total population. Activists have also pointed to the police violence used against demonstrators, inclusive of the firing of tear gas, rubber bullets, water cannons, pallet bags, and police beatings of unarmed demonstrators, to suggest that there is no comparison between overwhelming police violence against peaceful demonstrators to any property damage in LegCo, as well as pointed to that it is a misnomer to claim that demonstrators within LegCo were violent.

To this extent, pro-democracy activists have also cited how youth activists that entered the LegCo complex did so knowing that if their identities became publicly known, they could face up to ten years in prison on charges of “rioting”—but that some were still willing to take such a personal sacrifice in order to ensure Hong Kong’s future, particularly since three individuals have already died in the course of protests thus far, primarily due to suicides. Pro-democracy activists have also cited that, in a show of civility, demonstrators that entered the LegCo complex were careful not to damage priceless artifacts and left money for drinks that they took from within LegCo rather than simply trashing the complex.

Hong Kong government officials wish to suggest that pro-democracy activists crossed a line in their actions and that this invalidates their other demands, with the aim of discrediting the movement against the extradition bill as a whole. Some have suggested, sometimes conspiratorially, that police withdrew and allowed demonstrators to enter the LegCo compound with minimal force in order to orchestrate a set-up against them in this way, with the hopes that they could use vandalism of the LegCo building as a way to turn public opinion against them. One rumor which became popular on the Internet forum Reddit, for example, suggested that police condemnations of the LegCo invasion were prerecorded because in a video, the watch of the police officer making the announcement seems to show an earlier time than when the announcement was made.

Images of occupiers within LegCo leaving money for drinks or placing signs warning not to touch priceless artifacts within the building. Photo credit: 場邊故事/Facebook

Attempts to discredit the movement against the extradition bill by the Hong Kong government would not only be with the aim of discrediting the movement in the eyes of the Hong Kong public, but the international community writ large. If the statement issued by the European External Action Service, the diplomatic service of the European Union, is any indication, this ploy has been successful in some cases. Some media reporting by international outlets, including BBC and the New York Times, has been criticized as slanting toward the government angle by some activists and commentators.

Some have noted that the press conference held by Chief Executive Carrie Lam on 4 AM Tuesday morning—immediately after the attempted occupation—was lacking in details in during the sections conducted in Cantonese, but unusually detailed in its English section, suggesting that Lam may have been attempting to frame the brief occupation as violent in the eyes of international media. Others have suggested that Lam conducted the press conference in order to explain the unexpected turn of events to her superiors in Beijing.

Either way, one notes that after controversial forms of direct action in social movements, this sort of contestation between social movement actors and the government usually follows suit, with both sides seeking to win over both the domestic and international publics to their narrative of events.

Initially negative responses can sometimes even reverse themselves—as took place in Taiwan, for example, after the 324 attempted occupation of the Executive Yuan during the Sunflower Movement. Public reactions against the attempted Executive Yuan occupation were initially condemnatory. But after images of police violence against demonstrators became more and more widely circulated in the media, this led to the strong wave of public support for the Sunflower Movement that led to the demonstration which took place on March 30th, 2014 that brought over 500,000 individuals out in protest—this being the high point of the Sunflower Movement.

Namely, Beijing has indicated that it believes that those involved in the occupation should face charges. The Hong Kong government has generally suggested that it will comply, as observed in police gathering evidence within LegCo in order to locate and charge demonstrators. 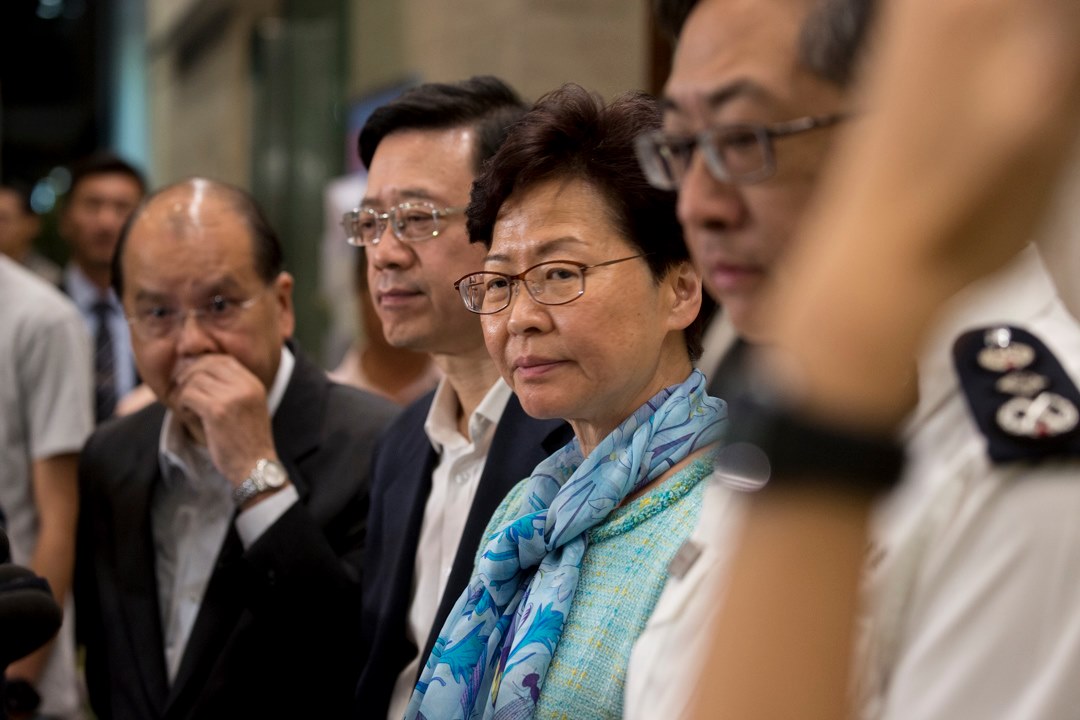 It may be that those involved in the charge could indeed face years behind bars. Yet if this were to take place, one expects that this would provoke a fresh round of outrage from the Hong Kong public. One also notes that with the threat of eventual intervention by the People’s Liberation Army (PLA) if Chinese authorities were to ever decide that events had grown beyond the control of the Hong Kong government, comparisons—even negative ones—between Hong Kong and Tiananmen Square are on the rise. Notably, the PLA released images of PLA garrison soldiers stationed in Hong Kong conducting drills in Hong Kong yesterday in what some perceive to be a vague threat.

As such, seeing as the Hong Kong government is as unwilling to back down as ever, despite the fact that LegCo was not occupied, the potential for escalating tensions remains high.