EVA AIR FLIGHT attendants currently on strike held a demonstration on Ketagalan Boulevard tonight. The demonstration, which began at 7 PM and ended at around 10:00 PM, had several hundred attendees. Likely in the vicinity of four hundred to five hundred individuals attended despite heavy rain. Demonstrators were asked to wear pink to the rally.

Over 2,500 of EVA’s 4,600 or so flight attendants are striking, which means that today’s demonstration represented only a fragment of striking workers. However, workers are also maintaining an occupation site outside of EVA headquarters in Nankan, Taoyuan. 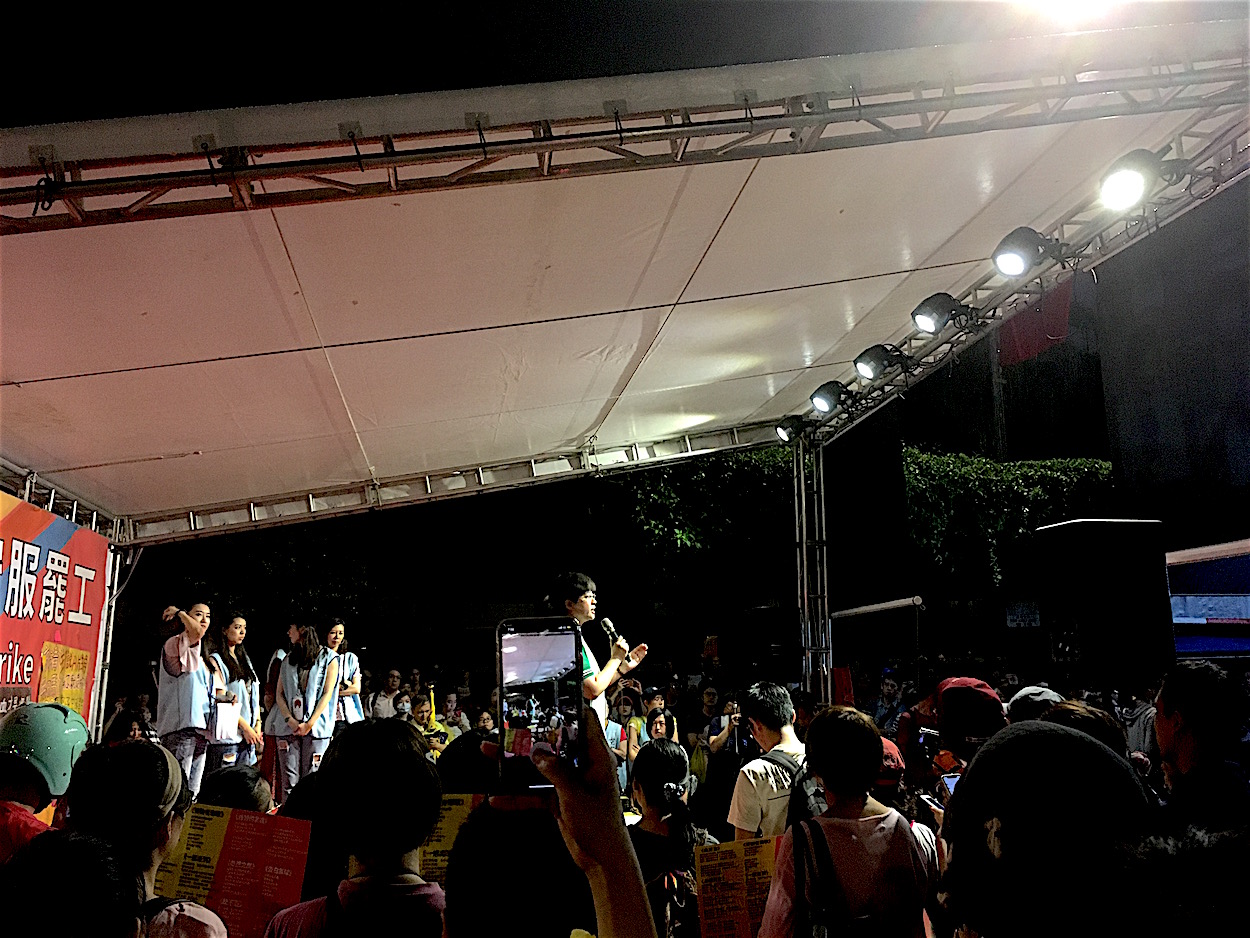 EVA flight attendants have been demonstrating for better working conditions, having called for a reduction in overtime hours, fairer arrangement of work schedules, and better pay for several years.

Nevertheless, in pushing for better working conditions, EVA flight attendants have endured attempts to crack down on union organizing from management in past years. Redbaiting accusations by management go back to 2017. To this extent, EVA management has in the past two weeks threatened to sue union organizers with the accusation that they were illegally keeping the passports of flight attendants who wished to refuse to work. 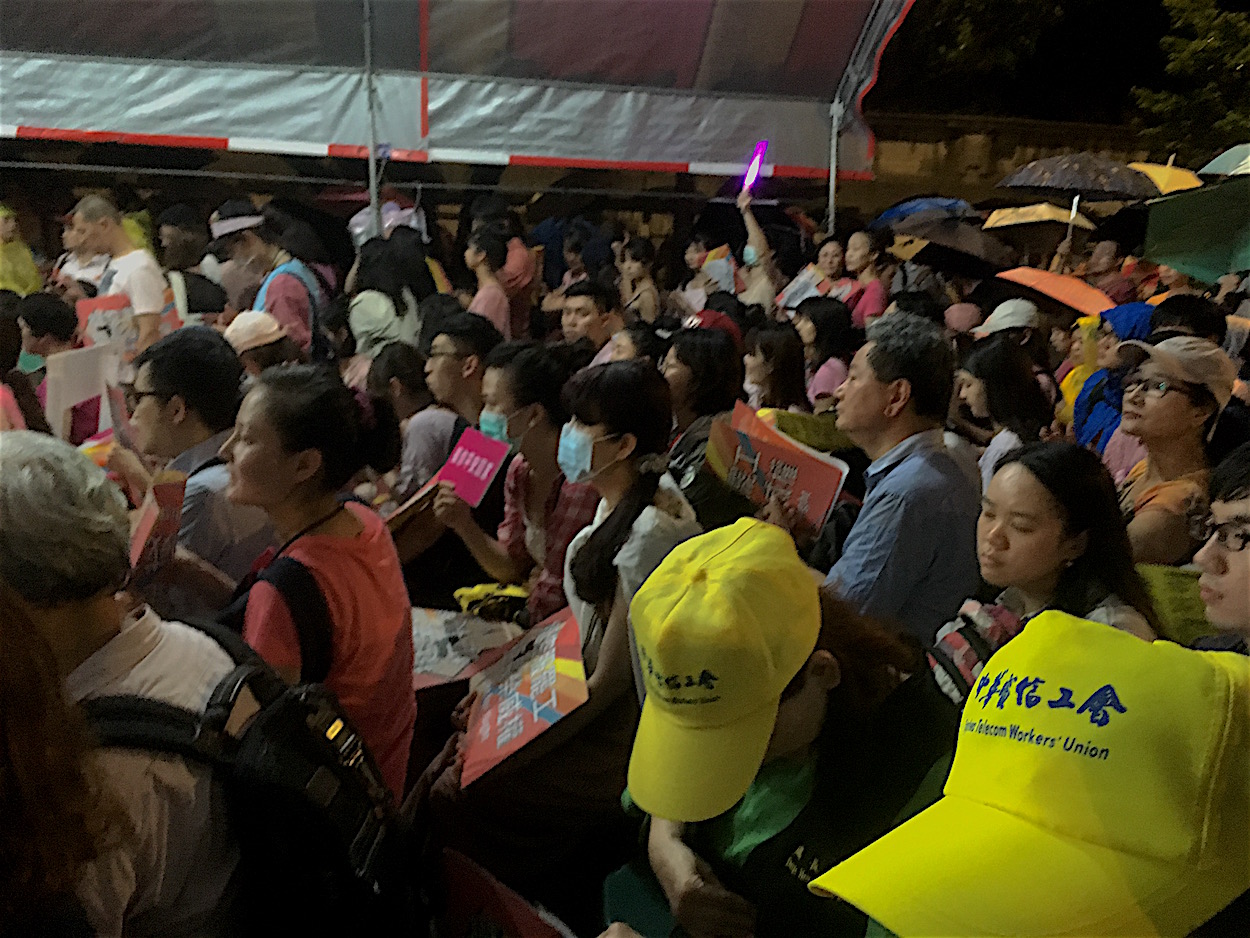 Among the speakers at the event were mothers and fathers of striking flight attendants, pro bono lawyers working with striking flight attendants, Handy Chiu, the chair of the NPP and himself a lawyer, Fan Yun, the convener of the SDP, well-known YouTuber and Taipei city councilor Froggy Chiu, film director Yang Ya-che, and others. Groups present included the Taipei Art Worker Trade Union, Taiwan Federation of Financial Union, the Tao Qin Enterprise Industrial Union, the Taiwan Tongzhi Hotline, the Anti-Commercialization of Education Association, the Shih Hsin University Graduate Institute for Social Transformation, and others. Food court employees at Taoyuan International Airport have also expressed support of the strike. 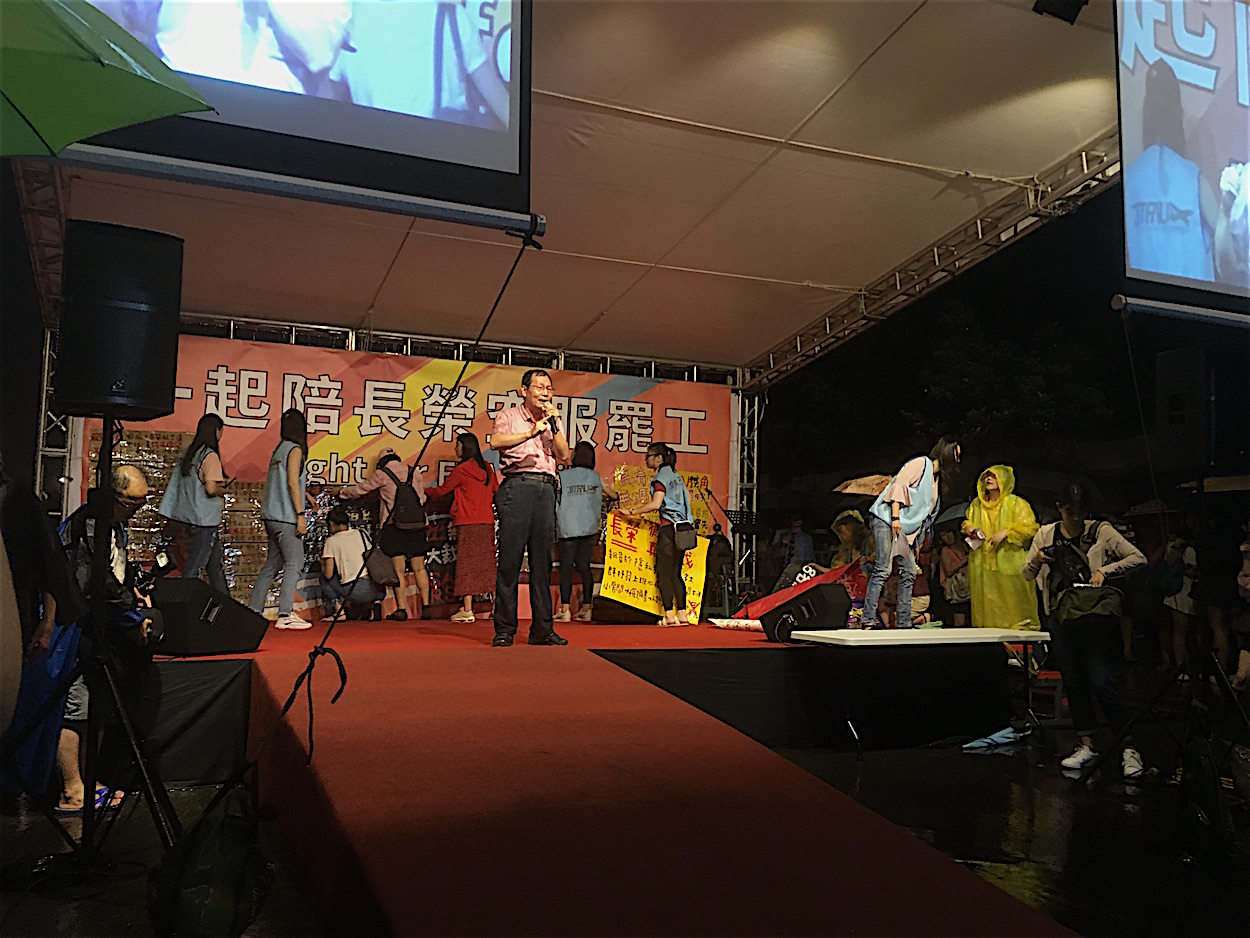 Chiu, along with other lawyers, stated that not only was the strike legal and one arrived at through a clear legal consensus from union members, but that Taiwanese lawyers as a whole had a duty to stand up for labor rights. Fan remarked on the gendered nature of the strike, with discriminatory demands that flight attendants, as female workers, be made to take on certain work—criticizing EVA for only considering hiring male flight attendants now that its exclusively female flight attendant workers are on strike, and suggesting that EVA’s other consideration would likely be to consider hiring non-Taiwanese female flight attendants to exploit workers of another nation. Cheng Chiwei of the Taiwan Tongzhi Hotline Association remarked on how not only were there many LGBTQ individuals among striking workers, but that labor struggles and LGBTQ struggles shared a basis in the struggle against exploitation.

Organizers stated that representatives of demonstrators in Hong Kong against the extradition law had expressed solidarity with the airline strike. Japanese labor activists also were present at the demonstration and made remarks, stating that young people in Japan, like in Taiwan, Hong Kong, South Korea, and other East Asian countries, face conditions with low salaries and precarious working conditions.

Demonstrators sang songs with lyrics changed to match the circumstances such as “The Meaning of Overwork” (過勞的意義), handed out notes among participants of the rally asking tem to write their thoughts on the demonstration, and handed out a list of past anti-union actions by the EVA management in the last twenty years, going back to incidents in 1989 and 1996. The sheet of songs to sing handed out at the demonstration included standards of demonstrations in the past year as “Meilidao” (美麗島), a traditional song of the Taiwanese democracy movement, “Island’s Sunrise” (島嶼天光), the anthem of the 2014 Sunflower Movement, and the “Worker’s Flight Song” (勞動戰歌), an standard of the Taiwanese labor movement originally adapted from a Korean song. Demonstrators also gave a labor-themed mock flight safety demonstration.

As remarked on by union organizers during the demonstration, the EVA flight attendants’ strike has faced more backlash compared with other airline industry strikes in past years. Organizers attributed this to management becoming better at turning public opinion against striking workers using the Internet over time, as observed in the rise of discourse calling for unions to be legally required to declare advance warning of strikes—never mind that this would highly diminish the power of strikes as a means of workers to put pressure on management and that, seeing as flight attendants spent two months voting on whether to go on strike or not, there was over two months advance warning of the EVA strike. This, too, may be the cumulative effect of the last few years of labor militancy in Taiwan’s airline industry. 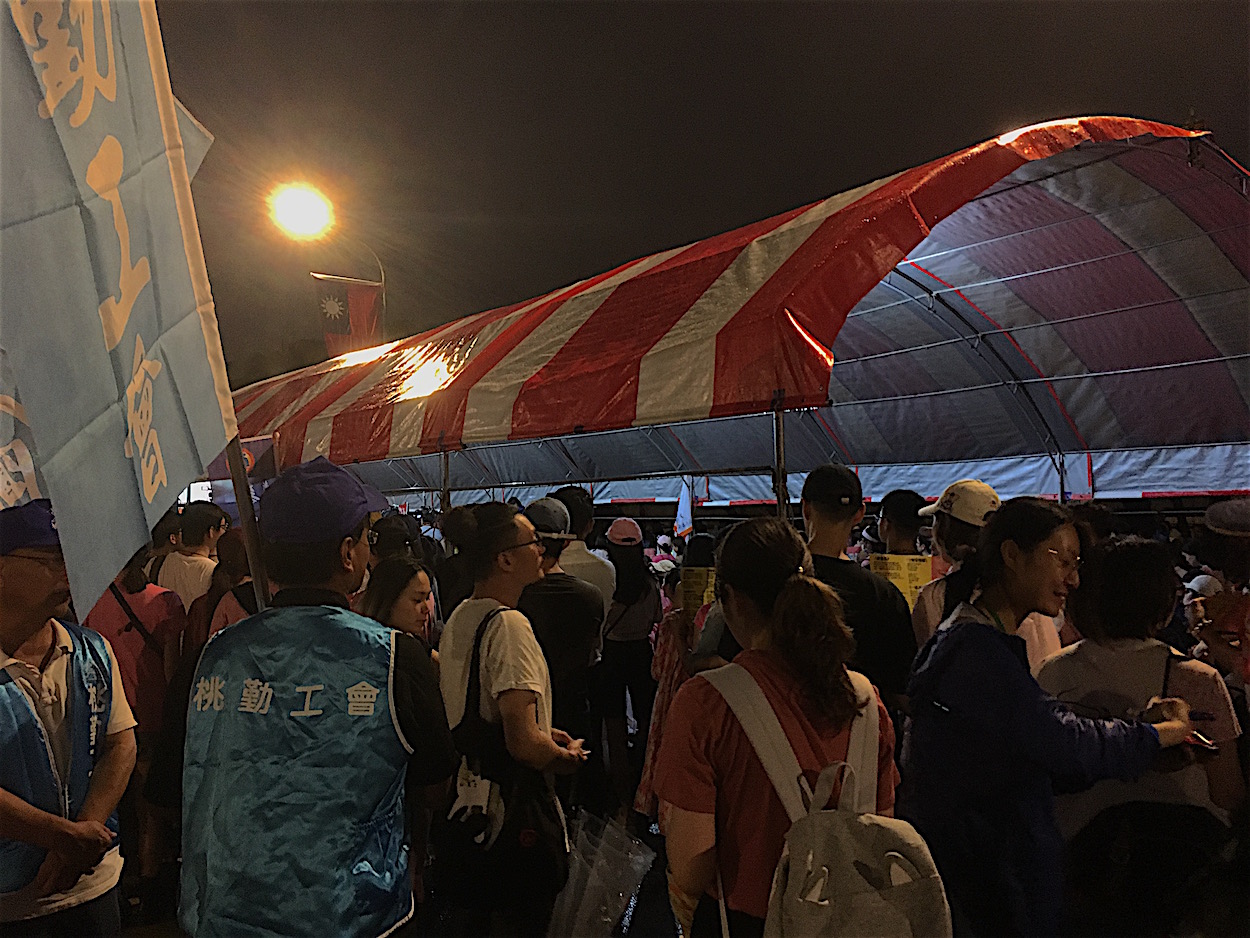 Organizers called on the Ministry of Labor and President Tsai Ing-wen to take action against the labor conditions faced by EVA flight attendants. The crowd in Taipei on Ketagalan Boulevard and at the Taoyuan occupation read aloud a letter to Tsai, which they later folded into paper planes and threw into the sky.

Some reports suggest that a split has developed between the Ministry of Labor and the Ministry of Transportation and Communications about how to resolve the strike. Either way, organizers stated that, despite over twenty negotiation sessions with management in the past two years, they have not made headway on their key demands, yet also emphasized that they would not back down. That being said, the Taoyuan Flight Attendants’ Union already compromised on some demands regarding calls for raises and bonuses.

As such, it remains to be seen whether management will eventually compromise, or whether it intends to hold out in order to force workers to back down. Over five hundred flights have been canceled to date, affecting tens of thousands of passengers, making it highly unusual that EVA management has not yet backed down. It may be that EVA management fears backing down will only encourage further actions from EVA workers—not just flight attendants, but also pilots, ground staff, and other workers—or within Taiwan’s airline industry as a whole.