Tens of Thousands Demonstrate in Taipei Against Chinese Media Influence

A DEMONSTRATION against so-called “red media” was held yesterday on Ketagalan Boulevard, “red media” referring to increasing Chinese influence in Taiwanese media. According to organizers, 100,000 attended, despite rain.

Since 2018 election season, increased attention has gone toward how many pan-Blue Taiwanese media outlets disproportionately report on KMT candidates in a positive light, report on DPP candidates in a negative light, and may simply parrot pro-China views. Disproportionate coverage of KMT candidates is visible, for example, in that close to 60% of CtiTV’s headlines were about Han Kuo-yu of the KMT on some days last year, or that CtiTV inflated the crowd count for Han’s mayoral inauguration. To this extent, one notes that pan-Blue media generally do not report on events which depict China in a negative light, as observed in lacking media coverage of demonstrations in Hong Kong against a Beijing-backed extradition bill. Likewise, with the 30th anniversary of the Tiananmen Square Massacre last month, the Want Want China Times recently drew criticism after netizens noticed that the newspaper was erasing old articles about the event. In another recent incident, the resignation letter of a reporter who had worked for over twelve years at the Want Want China Times went viral on social media, seeing as the reporter, Liao Yuxiang, could no longer stand the Want Want China Times’ attempts to pass off pro-China propaganda as objective news reporting.

The problem of Chinese influence on Taiwanese media outlets is large enough that, according to National Security Bureau officials, some media outlets may actually seek Chinese approval before running articles. Concerns have also been raised regarding substantial Chinese investment into some media outlets, with some funds thought to originate directly from the Chinese government. For example, in March, the Apple Daily reported that the Want Want Group—which owns the Want Want China Times, CtiTV, and China Television—received over 477 million Chinese yuan from the Chinese government between 2017 and 2018.

The demonstration began at 2 PM, although reportedly demonstrators began arriving as early as 7 AM. The demonstration had an unusual origin, as a rally jointly called for by NPP legislator Huang Kuo-chang and streaming personality Holger Chen. Huang is the former chair of the NPP.

According to Chen, Huang had previously approached Chen about potentially running as an NPP candidate in 2020 elections. Chen, a bodybuilding personality who is the owner of a gym, was originally known for KMT-leaning political views, before becoming increasingly critical of the KMT following what Chen perceived as the KMT’s willingness to sell out Taiwan to China—this taking place after a January speech by Chinese president Xi Jinping in which Xi stated that force was still on the table to forcibly unify Taiwan and China. It may be that Huang’s intent was to try and make the issue into a bipartisan one, in some sense, by coordinating with Chen. 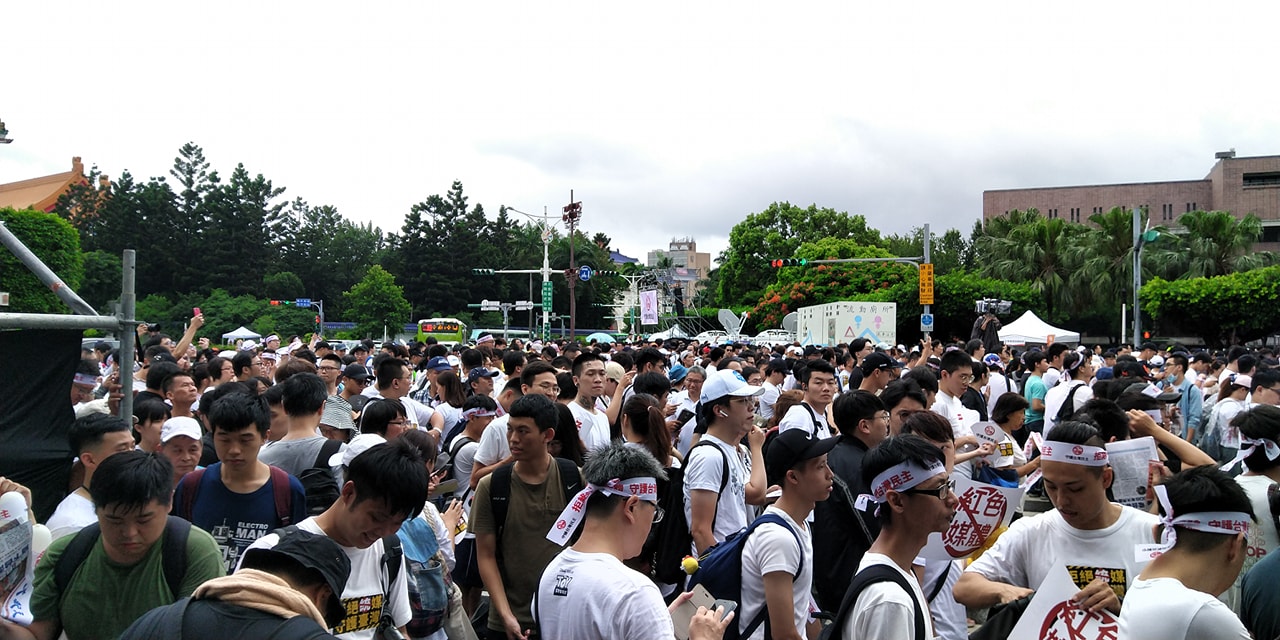 Members of Third Force parties such as the NPP, SDP, and Taiwan Statebuilding Party were present at the demonstration. Among the speakers were Huang, Chen, Miao Poya of the SDP, Wang Ting-yu of the DPP, and Causeway Bay bookseller Lam Wing-kee—who fled to Taiwan in anticipation of the passage of the extradition bill in Hong Kong—and Kevin Lee, a documentary filmmaker who has made several documentaries about Taiwan’s media environment, most notably The Taste of Apple.

A draft bill regarding measures to take against Chinese influence in Taiwanese media was recently introduced by Wang and the Radical Party, modeled after similar measures taken in Australia. The claim is that the bill will not limit freedom of expression for such media outlets, but simply make it clear to Taiwanese citizens whether a media outlet is predisposed toward pro-China viewpoints on the basis of its sources of funding.

Notably, a number of speakers brought up the deterioration of political freedoms of expression in Hong Kong as a negative precedent for Taiwan. One notes that a number of placards at the demonstration also referred to Hong Kong, including with regard to the usage of Cantonese phrases. And a seen in many pictures of the demonstration, one participant dressed up as Winnie the Pooh as depicted as a Chinese emperor—a reference to a banned Internet meme comparing Chinese president Xi Jinping’s physique to Winnie the Pooh—while also carrying an Infinity Gauntlet from the Avengers movies.

Based on aerial shots, some suggest that the rally could have been as large as a demonstration by supporters of Kaohsiung mayor Han Kuo-yu in Taipei earlier this month, which Han supporters claim drew 400,000 supporters. Yet many have suggested that such numbers were inflated. Either way, it should be clear that much of what was at stake in yesterday’s demonstration was not merely the issue of media freedoms in Taiwan, but also broader issues regarding Taiwan’s relation to China as a whole. In this sense, yesterday’s rally can be seen as inflecting some of the key issues at stake in the lead-up to 2020 elections.

Indeed, the issue of pan-Blue Taiwanese media outlets self-censoring news reports which depict China or the KMT in a negative light is an old one, this having previously been the object of protests in the 2012 Anti-Media Monopoly Movement. The Anti-Media Monopoly Movement would be a key event in the lead-up to the 2014 Sunflower Movement. Nevertheless, the issue of “media monopoly” would simply be one of the many of the issues at stake during the Sunflower Movement which remain unresolved in the present.