CELEBRATIONS HAVE taken place across Taiwan in the last two days, with Taiwan’s first gay marriages taking place yesterday after the passage of gay marriage into law last week, and a mass wedding banquet held today on Ketagalan Boulevard in front of the Presidential Office. The legal changes legalizing gay marriage took effect yesterday, on May 24th, the original deadline set by the Council of Grand Justices for same-sex marriage to be legalized by in 2017. As Taiwan is the first country to legalize gay marriage in Asia, these are the historic first gay marriages to take place in Asia. 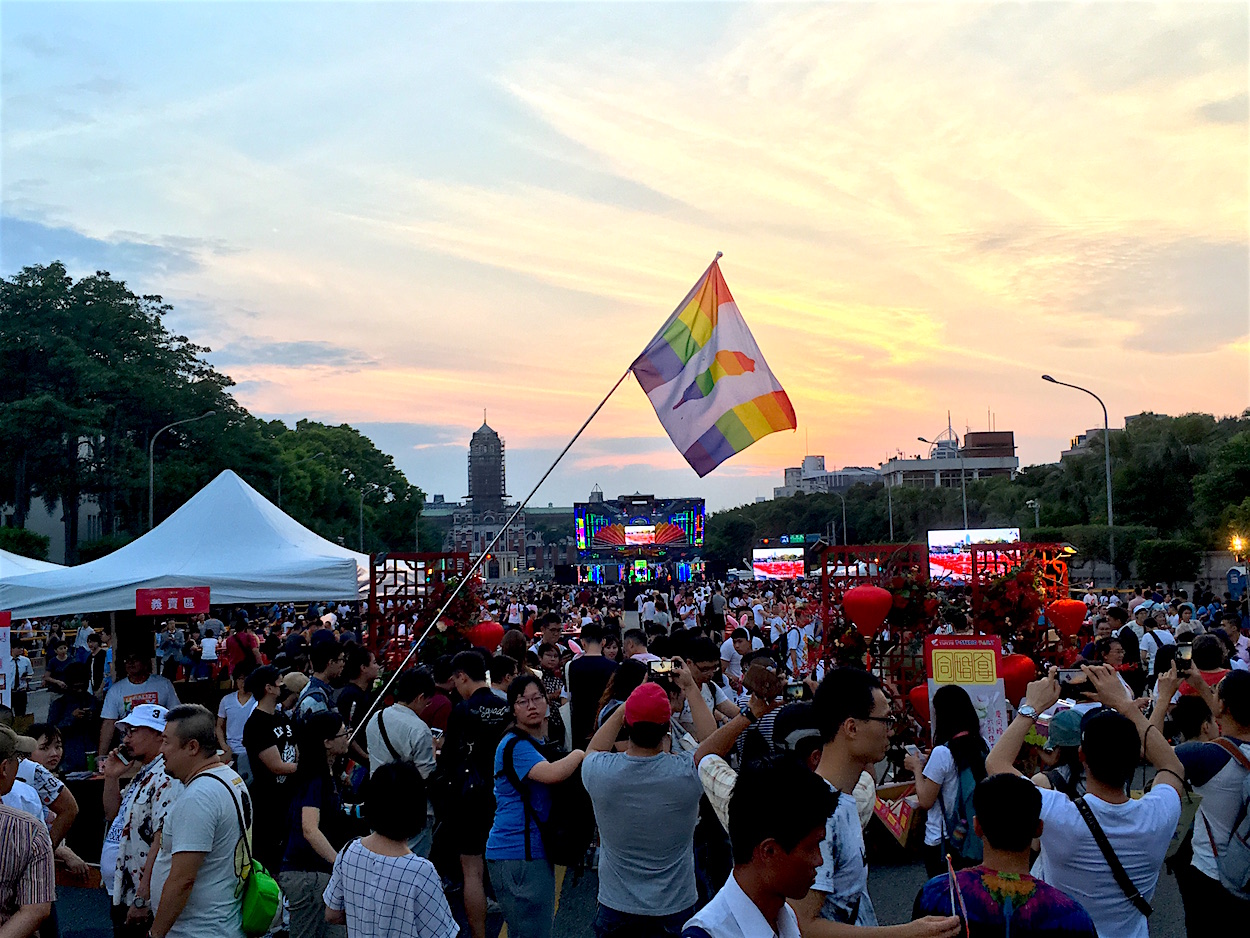 Marriage registrations took place at household registration offices across Taiwan yesterday, with 526 couples registering by 5 PM according to the Ministry of the Interior. This included 185 male couples and 341 female couples. The highest number of marriages took place in New Taipei, followed by Taipei, and then Kaohsiung, which may not surprise given population distribution in Taiwan.

Much media attention has focused on marriage ceremonies held in Taipei, with marriage registrations taking place at the Xinyi District Office and an outdoor wedding party held by the Taipei City Government outside of Taipei 101. This was attended by key figures of Marriage Equality Taiwan, the coalition group of LGBTQ advocacy organizations which was the primary force in the push for legalizing gay marriage, and LGBTQ activist Chi Chia-wei, whose legal case led to the constitutional interpretation by the Council of Grand Justices in 2017 that same-sex marriages needed to be recognized by the government in the next two years, Chi being represented by the lawyers of the Taiwan Alliance for Civil Partnerships. 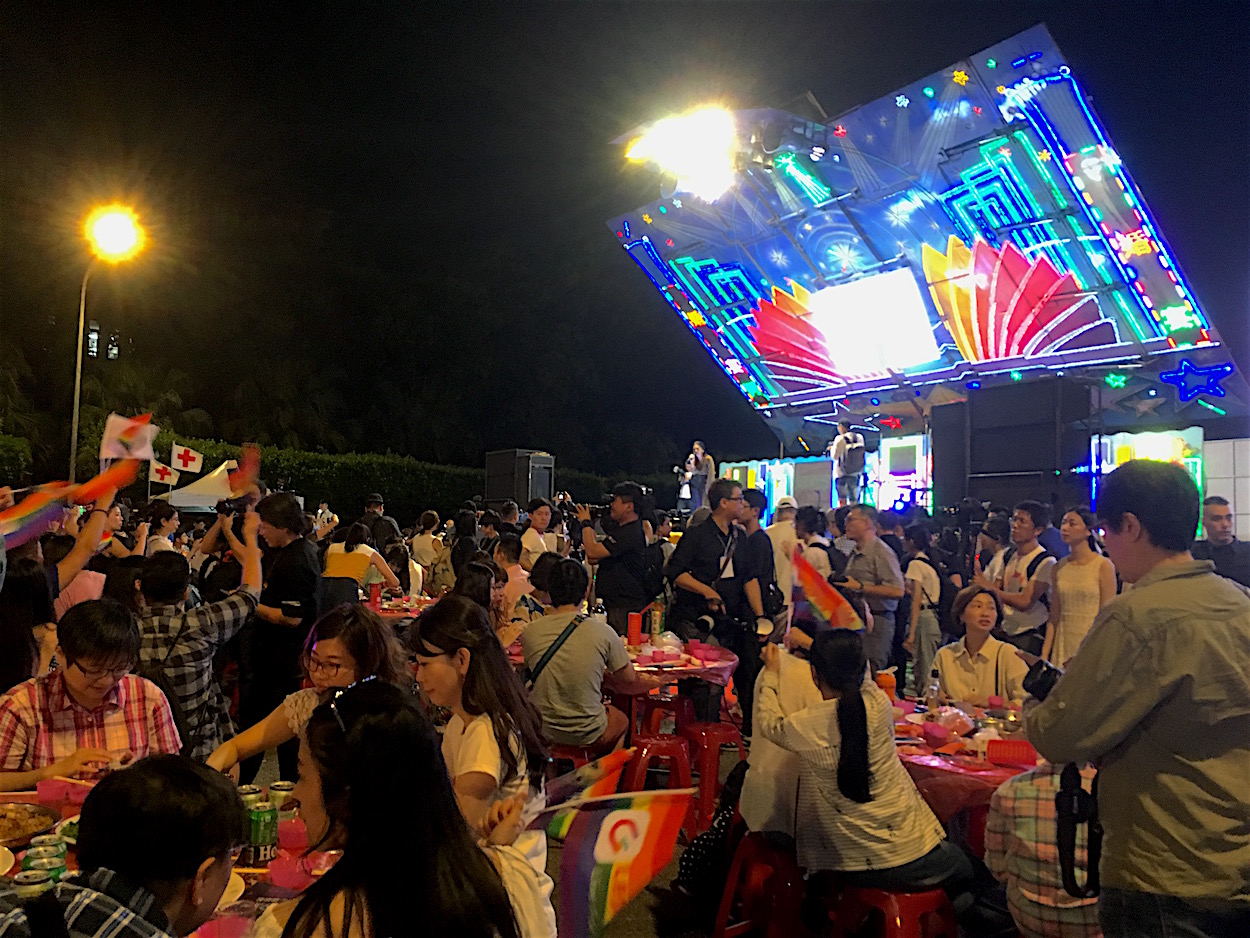 Subsequently, a mass wedding banquet took place on Ketagalan Boulevard in front of the Presidential Office today. This was held as a bandoh-style outdoor banquet, the bandoh being a traditional form of Taiwanese outdoor banquet. Likewise, an electric flower car—a moving stage converted from a truck used for a number of public events in Taiwan—served as the stage for the MCs and performers.

160 tables were set out for the banquet, which was attended by over 1,000. Ceremonial plates and craft beer bottles were also sold on-site. Small groups who were not part of the formal banquet, many of which were had brought their own meals, sat outside and around the main banquet. Performances by bands and singers were held on a secondary stage outside the main banquet beginning at 5 PM. With the formal start of the wedding banquet at 7 PM, the performances and speeches that took place on the electric flower car were broadcast live on screens. 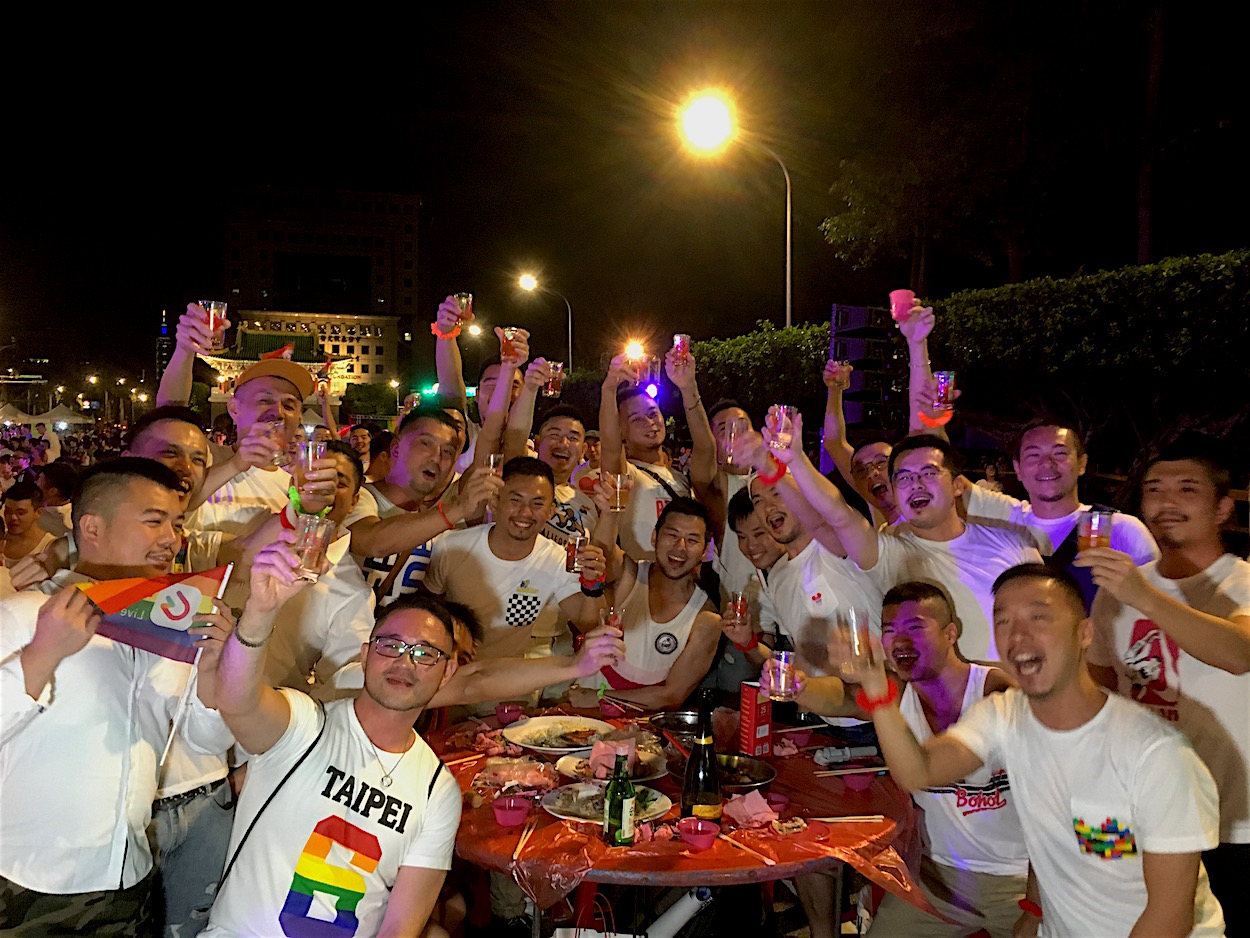 Performers included Eve Ai, Lee Te Yun, Kini & Jay, DJ Rainbowchild. Drag performances, go boy performances, and a performance by the G-Major Chorus, an all-gay male choir, also took place. Recorded messages from celebrities including Jolin Tsai, Coco Lee, Xiao S, and others were played, and film director Wang Shaudi gave a speech. The names of couples were announced as they entered the banquet, after kissing, they toasted the crowd. 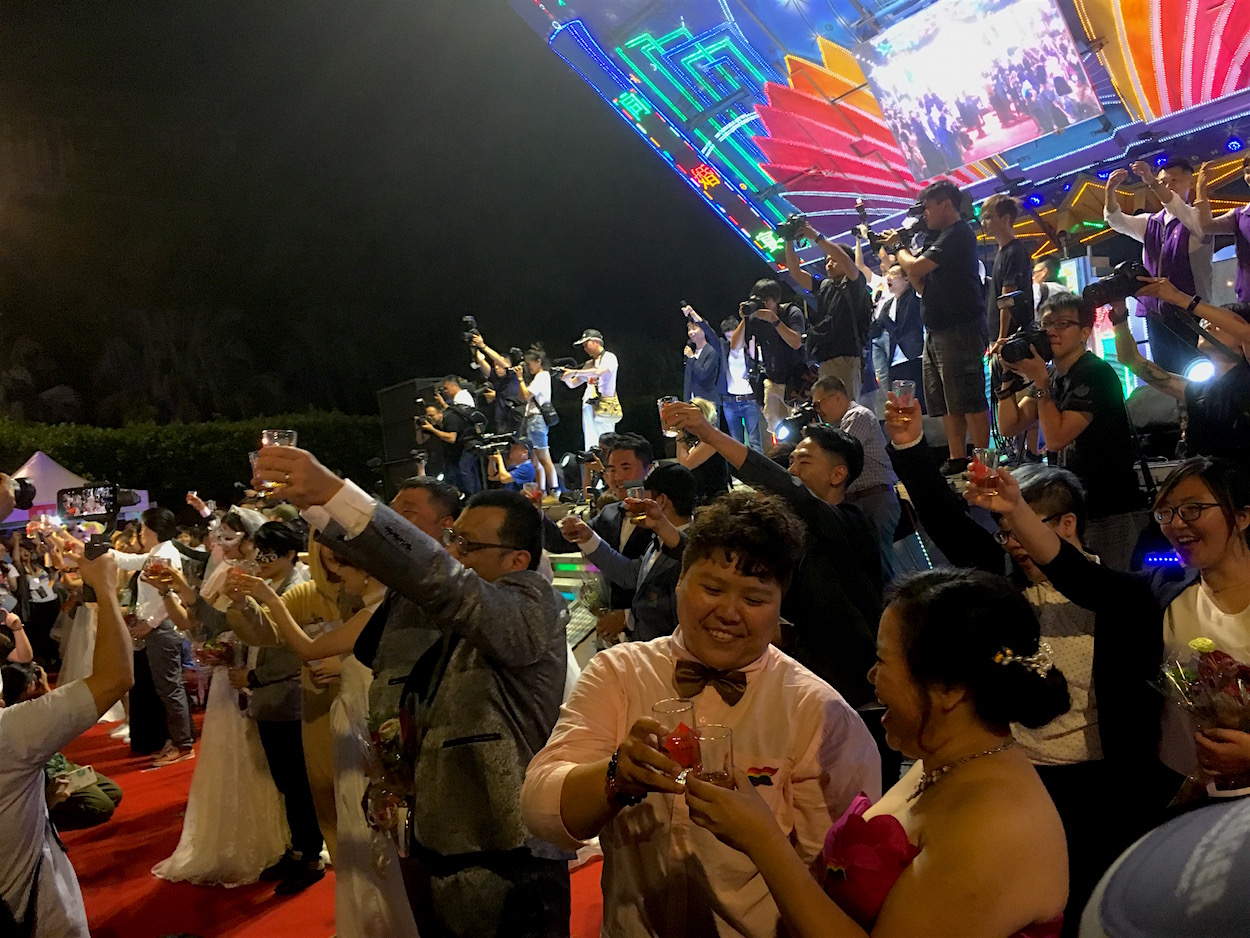 In public comments, however, speakers at the banquet were careful to note that despite the legalization of gay marriage in Taiwan last week, same-sex couples remain unable to jointly adopt the children unless they are the biological children of a member of the couple. To this extent, same-sex marriages between Taiwanese and foreigners will only be recognized if the foreigner is from a country which also recognizes same-sex marriage. Moreover, speakers pointed out that social prejudice is still widespread in Taiwan, hence the continued need for education and dialogue.

And it is to be kept in mind conservative social forces will likely still try to overturn gay marriage going forward. KMT legislator Lai Shyh-bao, one of the KMT legislators most strongly opposed to gay marriage, has vowed to undo the bill. Furthermore, the Blue Sky Action Alliance, a deep Blue political group, held a demonstration across from the wedding banquet at the Chiang Kai-Shek Memorial earlier today. 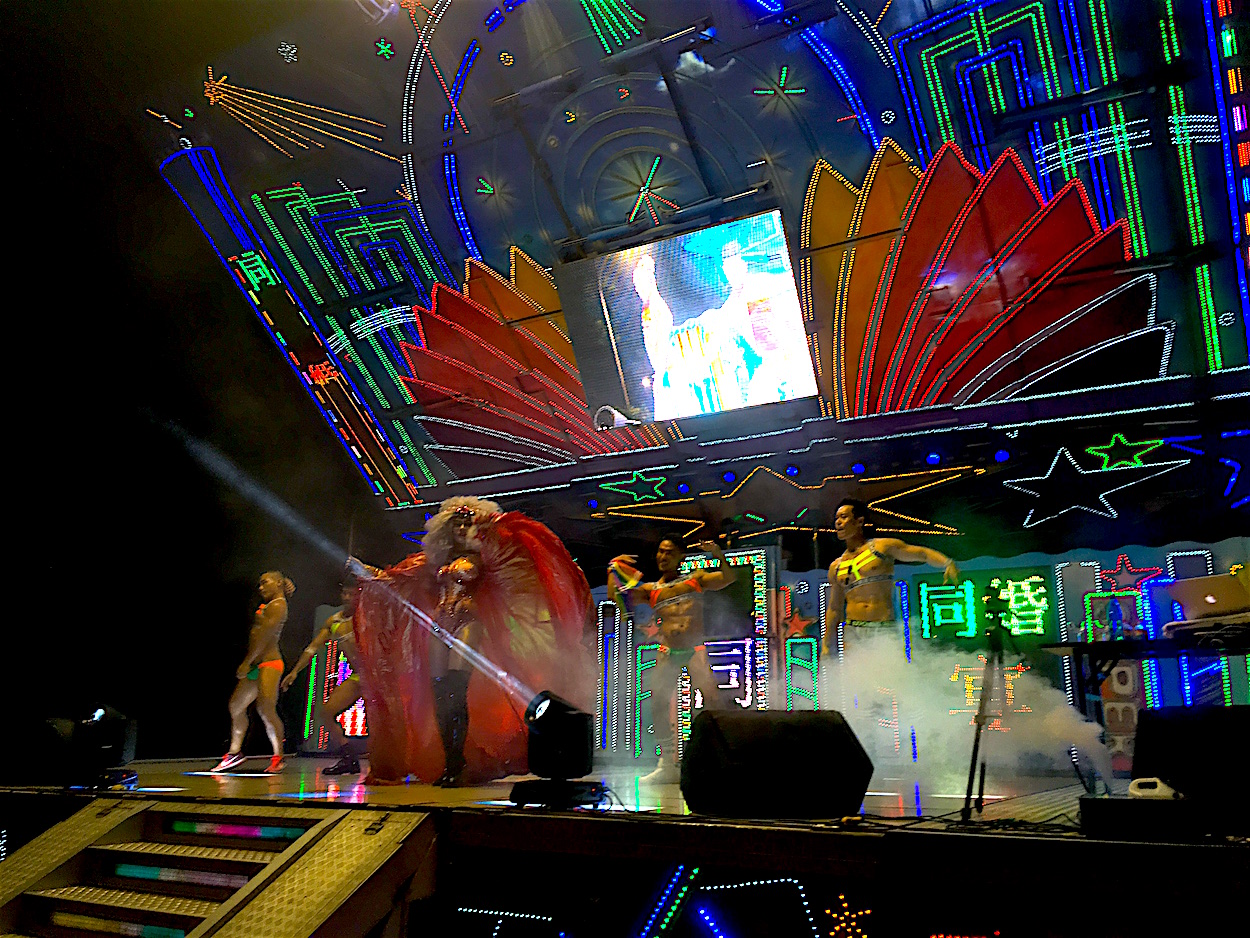 Though attended by scarcely two or three dozen people, the demonstration claimed that the Tsai administration had defied the will of the public in passing gay marriage into law despite gay marriage being voted down by a national referendum last November and that, as a result, democracy in Taiwan had “died.” As such, the demonstration featured a hearse that drove alongside marchers. Christian groups opposed to gay marriage have also vowed to run candidates in next year’s elections in order to realize their fundamentalist political vision in Taiwan.

As such, while today may be a day of celebrations long in the making and long deserved, the fight continues in Taiwan for members of the LGBTQ community and their allies. Gay marriage has been legalized, the result of decades of struggle. Nevertheless, it may still be a long road to be walked to realize full marriage equality in Taiwan and, in that respect, to create a society genuinely free of prejudice.