NUCLEAR PHYSICIST Hiroaki Koide has pointed out that although eight years have passed, there is still more than one million tons of irradiated water which still hasn’t been treated. The Tokyo Electric Power Company (TEPCO)’s “handling” method for this situation was to build a thousand sewage tanks to store the sewage. But as space was limited and the number of sewage tanks was also limited. As such, Koide asserts, “TEPCO will be compelled to release these waters into the sea in the near future.” [1] Moreover, with regards to the core meltdown of the reactor, the melted fuel rods remain unaccounted for.

Koide points out that if there were issues with a fired power plant, there would not be such issues. But if this is nuclear power, “Anyone approaching the site would die.” Despite that the Japanese government has attempted to handle the matter with robots, once the microchips inside are exposed to radiation, they will be overwritten. Likewise, exposure to high levels of radiation is deadly for workers.

As such, Koide has been staunch in advocating that the only solution to the Fukushima incident is a Chernobyl-style sarcophagus, covering the nuclear power plant. But he also admits, even in this case, “the containment of this disaster will not have been achieved even after all who are alive today have died.” [2] 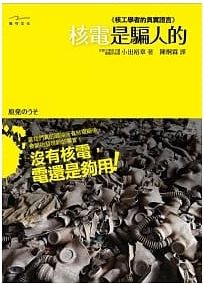 Abe Shinzo issued an order for an end to an evacuation on April 1st, 2017, at the same time as he issued a compulsory repatriation policy. At this time, the town of Namie, 11.2 kilometers from the Fukushima nuclear power plant, has been described as a “ghost town.” As raised by now deceased mayor Baba Yushi before he died, after the end of the evacuation, 234 people—one percent of the population—returned to Namie to live. The majority of these were elderly, which is to say, the town lacked a working population. Without any means of transportation and open supermarkets. There was just one clinic. [3]

As a compensatory measure in line with the repatriation measure, TEPCO set a deadline, requesting that disaster victims assess their losses, and inform TEPCO of what kind of compensation they requested. Regarding this, the mayor of Namie stated that TEPCO never should have set this kind of deadline, but should account for the losses of disaster victims themselves.

What is even more incredible is that TEPCO could use “individual circumstances” as a way of avoiding the requests of disaster victims. For example, residents in twenty kilometers of the nuclear power plant were forcibly evacuated but TEPCO interpreted this instead as “voluntary evacuation”, and refused to pay compensation. [4] Even those who lost their real estate might not receive compensation, not to mention harms that could not be compensated for, such as those below the age of eighteen whose thyroids were inspected five years later, among them 172 were positive for or suspected of having thyroid cancer, and 131 had their thyroid glands removed by operation. [5]

At the same time, damages to the environment cannot be compensated. Who is it that would receive compensation? What kind of compensation would that be? Before the disaster, Fukushima’s agricultural industry and natural environment were comparatively famous. But after the disaster, farmers have been forced to the end of a rope, some of which have chosen death. [6] Completely clearing radiation from the land is also impossible, because in clearing remaining radiation in the forest, this would require cutting down all of the trees, and removing all of the topsoils. [7]

Protests by those who have developed thyroid cancer were criticized by the government, stating that their protests were causing “reputational damage”.[8] The government and TEPCO toss the ball to each other, and what is even stranger is that nobody seems to need to take responsibility. [9]

Cold War Traces: The Treaty of Mutual Cooperation and Security between the United States and Japan

IN THE PAST few years, the issues that Japan confronts do not only have to do with the nuclear disaster, but also to do with American military bases in Okinawa. After the end of World War II, Allied troops occupied Japan, with the demand that Japan renounce the right to wage war. In 1951, America and Japan signed the Treaty of Mutual Cooperation and Security between the United States and Japan for the first time, with Okinawa becoming a site for American troops stationed in Japan. 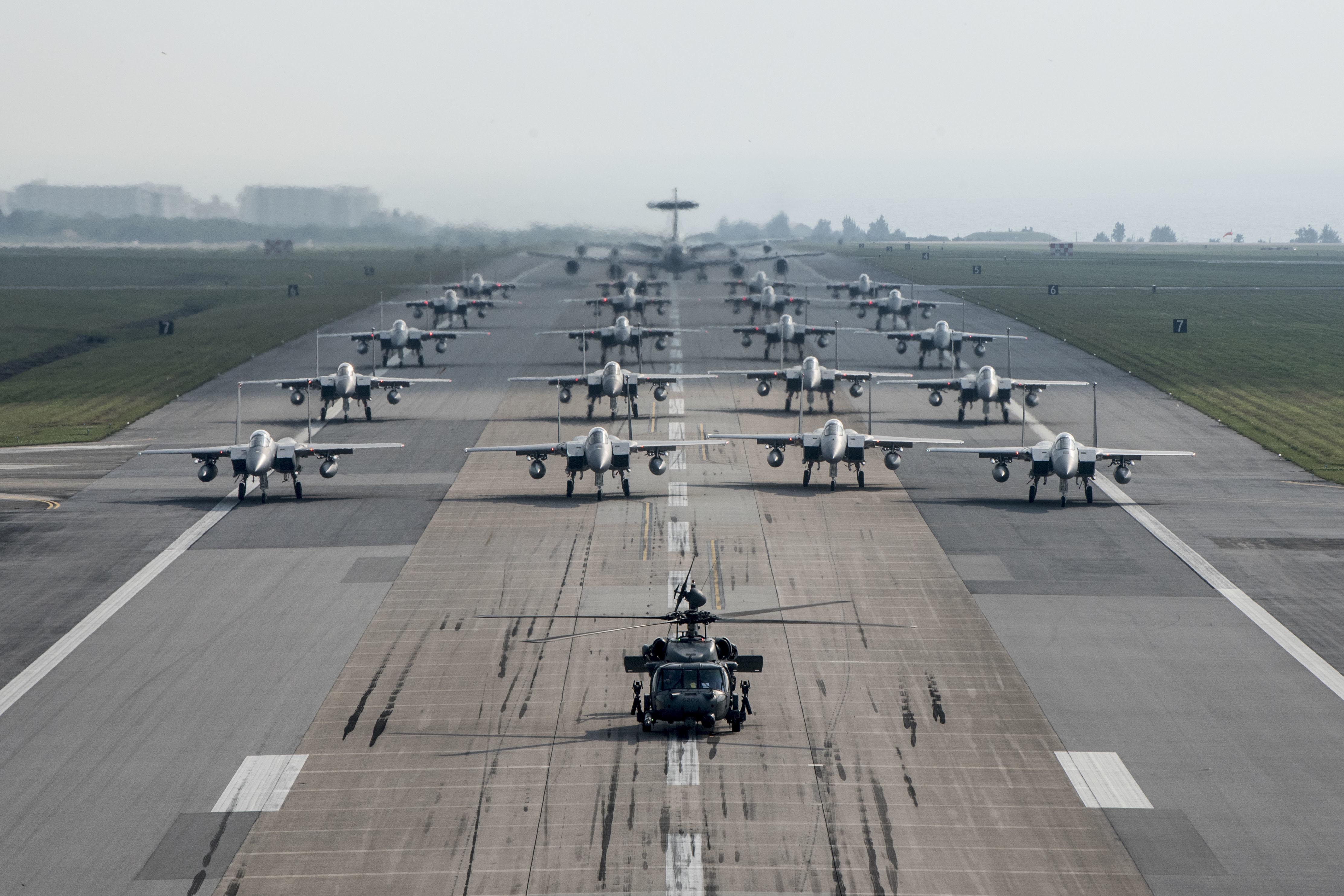 Voices opposed to American military troops stationed there have always existed. Although it does not constitute one percent of the overall territory of Japan, Okinawa hosts 33 military bases on it. To this existent, American troops have hurt residents of Okinawa in the long-term, including cases of sexual assault (including gang rape and murder), hit-and-run car accidents, and military aircraft accidents. [10]

The Henoko air base, which is always expanding under the auspices of land reclamation, has long been protested by residents. Finally, on February 24th, a referendum was initiated. Yet in spite of a vote of over seventy percent opposition to the base, the Abe government has firmly stated that the base relocation will not be postponed, and that sand will continue to be poured into the ocean for reclamation.[11] Politics aside, the seafloor has been described as “as soft as mayonnaise,” with concerns about the possible dangers, and land reclamation in the sea is seen as dangerous for ecological diversity. [12]

How Does the Olympics Clean Up? (Or, Is There an Olympics Without Cleaning Up?)

WHEN INTERVIEWED in Zhu Zhong (《諸眾》, literally Multitude), published by Kao Jun Honn in 2015, homeless artist Misako Ichimura raised opposition to the Olympics in the city that “Now we confront the challenge of the 2020 Tokyo Olympics. Whether we are homeless residents, or just the disprivileged, we all confront a large threat….many disaster victims don’t have a place to settle…For the sake of the Olympics, not only the parks, but the roads will be snatched away. The government also teaches children about the history of the Olympics, organizes many sporting activities. Everyone’s behavior and thinking has been “Olympicized” (P. 83-84). [13] 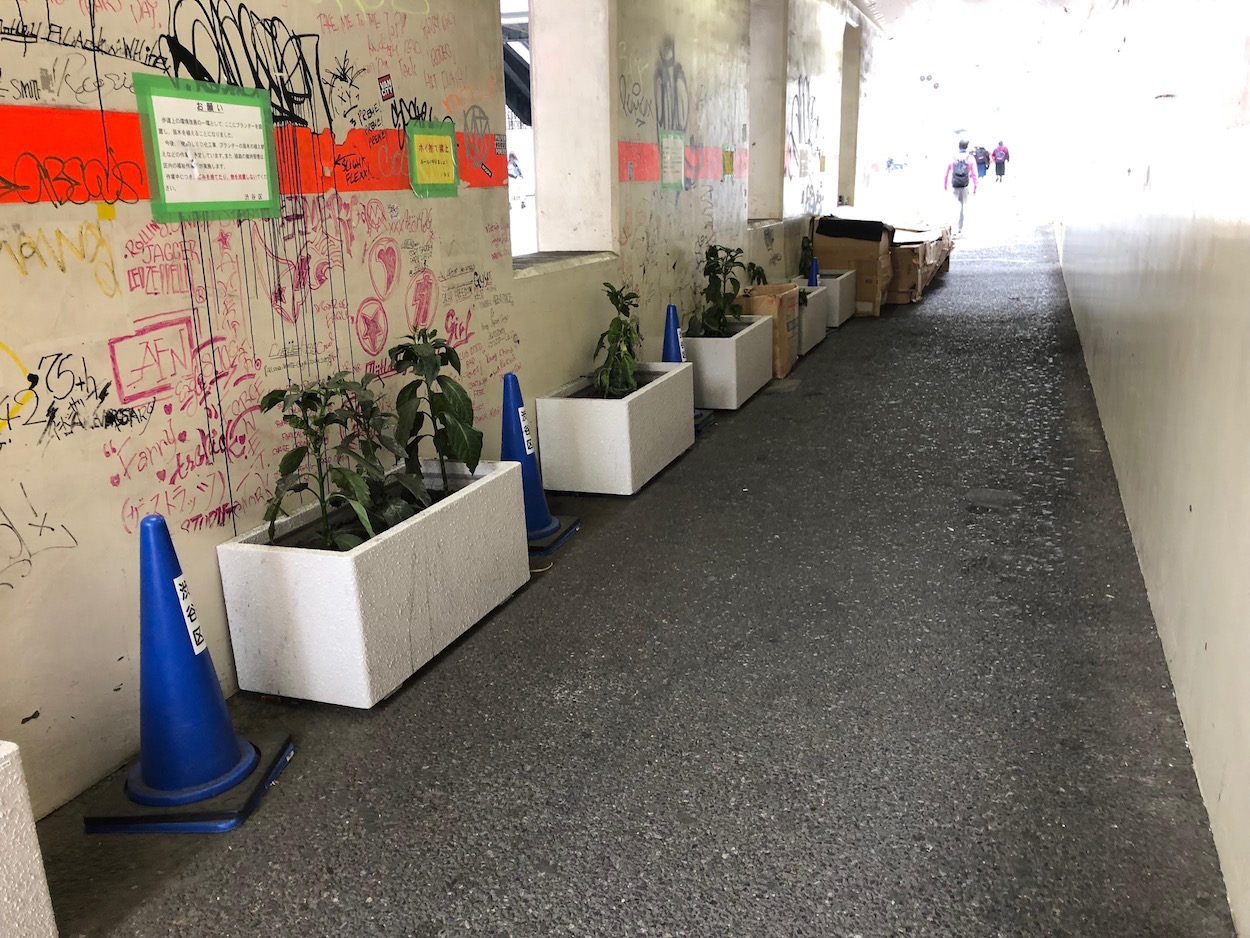 For spaces to live for the homeless, these have already been buried, stuffed underneath highways. Taken on March 31st, 2019.

What is this threat that Ichimura speaks of concretely? I went to Japan at the end of March and in the beginning of April. Yoyogi Park has already become a shop in front of the Tokyo Olympics, with the park being completely gentrified as a space. Those living in the park have no more space to reside. The government has set up traffic cones, plants, and indirect means to drive away homeless Outside of this, Miyashita Park has been demolished, as part of plans for a “New Miyashita Park” undertaking, forcing squatters to inhabit the scaffolding.

Japanese citizens do not know this because mainstream media has not reported on this. According to Kojin Karatani, the Japanese media is in the control of the nation and capitalism. “Regarding the danger of Fukushima, the discussion is all one-sided, with only the small outlet, the Tokyo Shimbun opposed to nuclear energy.”[14] With the 2020 Tokyo Olympics viewed as an aspiration for peace, liberty, and progress, Abe has pushed for welcoming international tourists, hoping for everyone to have fun. He said to the International Olympics committee that the situation in Fukushima is “Under control,” and that, “It has never done and will never do any damage to Tokyo.” [15]

Under these circumstances, whether the unresolved issues of radiation, without appropriate treatment of nuclear power facilities, disaster victims lacking a place to reside, the forcible relocation of American army bases or the dispersal of the homeless, the Japanese media has relentlessly broadcast the Olympics. The Olympics is a peaceful and happy international competition. The Japanese government and capitalists have conspired to bury alive the marginalized affection. The Olympics will bring business to Japan and because the Japanese government and capitalists have torn down the park, building gorgeous architecture which will be taken down in the future, and other buildings will be built in the exact same place. These are work opportunities and international tourists will come to Japan, an opportunity for business. 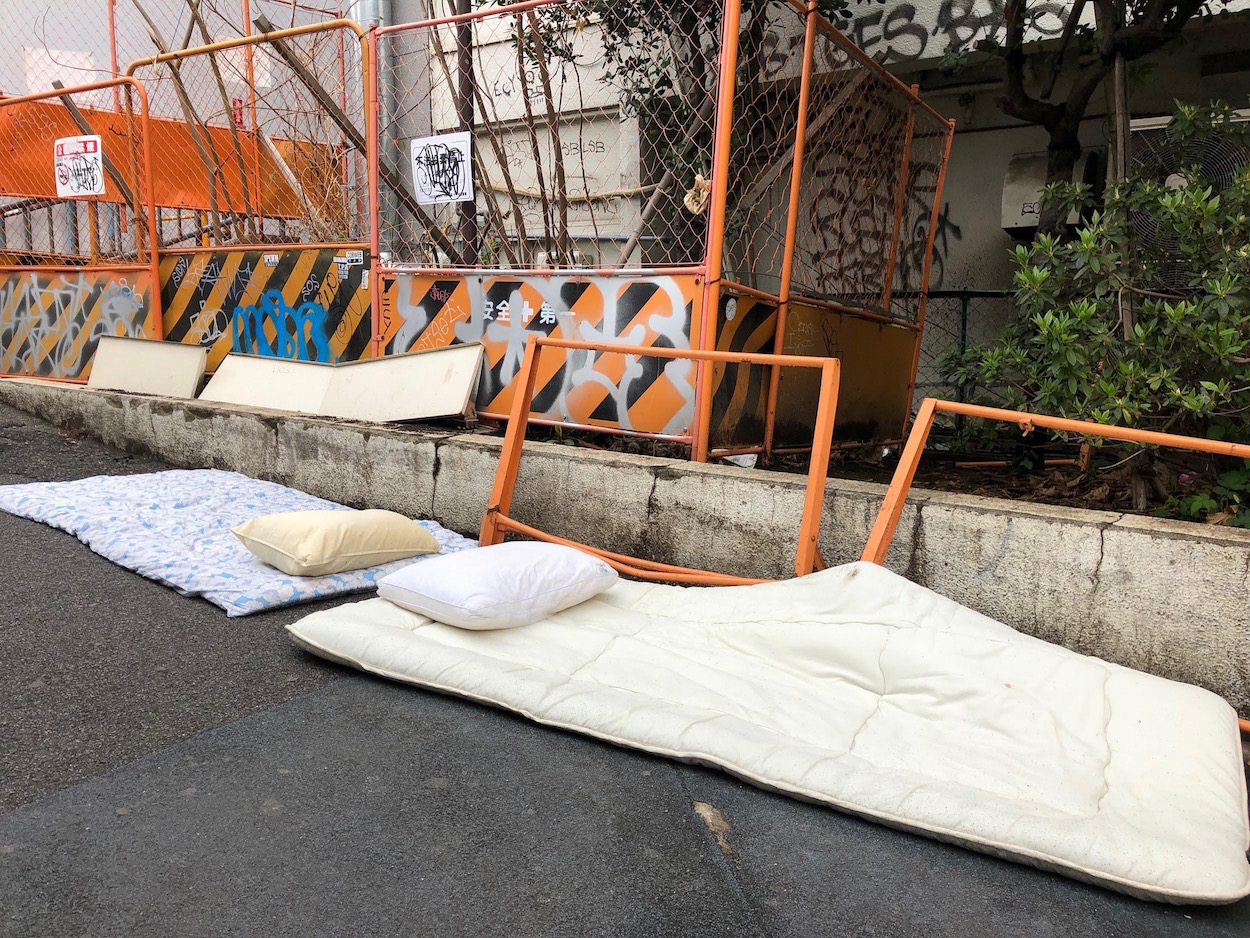 Bedding for the homeless in Miyashita Park. Taken on March 31st, 2019.

For the Abe government to bring such international attention to Japan, those who have dissenting opinions are viewed as unrealistic and are thought to block others’ livelihoods. This has even affected activities aimed at providing relief to disaster victims. Regarding the Tokyo Olympics, Koide Hiroaki’s essay emphasizes strongly, “The Tokyo Olympics will take place in a state of nuclear emergency. Those countries and the people who participate will, on the one hand, themselves risk exposure, and, on the other, become accomplices to the crimes of this nation.” [16]

To this, we are not strangers in Taiwan.

[1] See “The Fukushima Nuclear Disaster and the Tokyo Olympics”.

[3] See “‘Save the Town’: Insolvable Dilemmas of Fukushima’s ‘Return Policy’”.

[10] One can see the report “Decoding the US Military Bases in Japan with 9 Graphs” (九張圖解密日本美軍基地) in the News Lens and “Okinawa Government Sued by Japanese Government for ‘the Most Dangerous Military Bases’” (為了「全世界最危險的軍事基地」，沖繩縣政府被日本政府一狀告上法庭──觀光客看不到的美軍基地問題) in Crossing.

[11] One can see the report in UDN Global, “Okinawan Referendum: Say No to the US Military Again? The People Neglected by the Japanese Government” (沖繩基地公投：再次向美軍說NO？日美政府無視的43萬民意).

[12] See the editorial, “Henoko project clearly doomed; time to open talks with U.S” in Asahi and “US Military Base Threatens Biodiversity in Okinawa” in Truthout

[13] One can look at Kao Jun Honn’s “Parks as Method: About Misako Ichimura” (公園作為方法：關於市村美佐子). Outside of this one can examine the reflections on the problems of Okinawa, South Korea, Taiwan, and China in Zhu Zhong.

[15] See transcript of speech by Abe.