INTERNATIONAL WORKERS’ DAY saw thousands of workers take to the streets of Taipei today, with the demonstration beginning at noon today on Ketagalan Boulevard and ending around 4 PM. 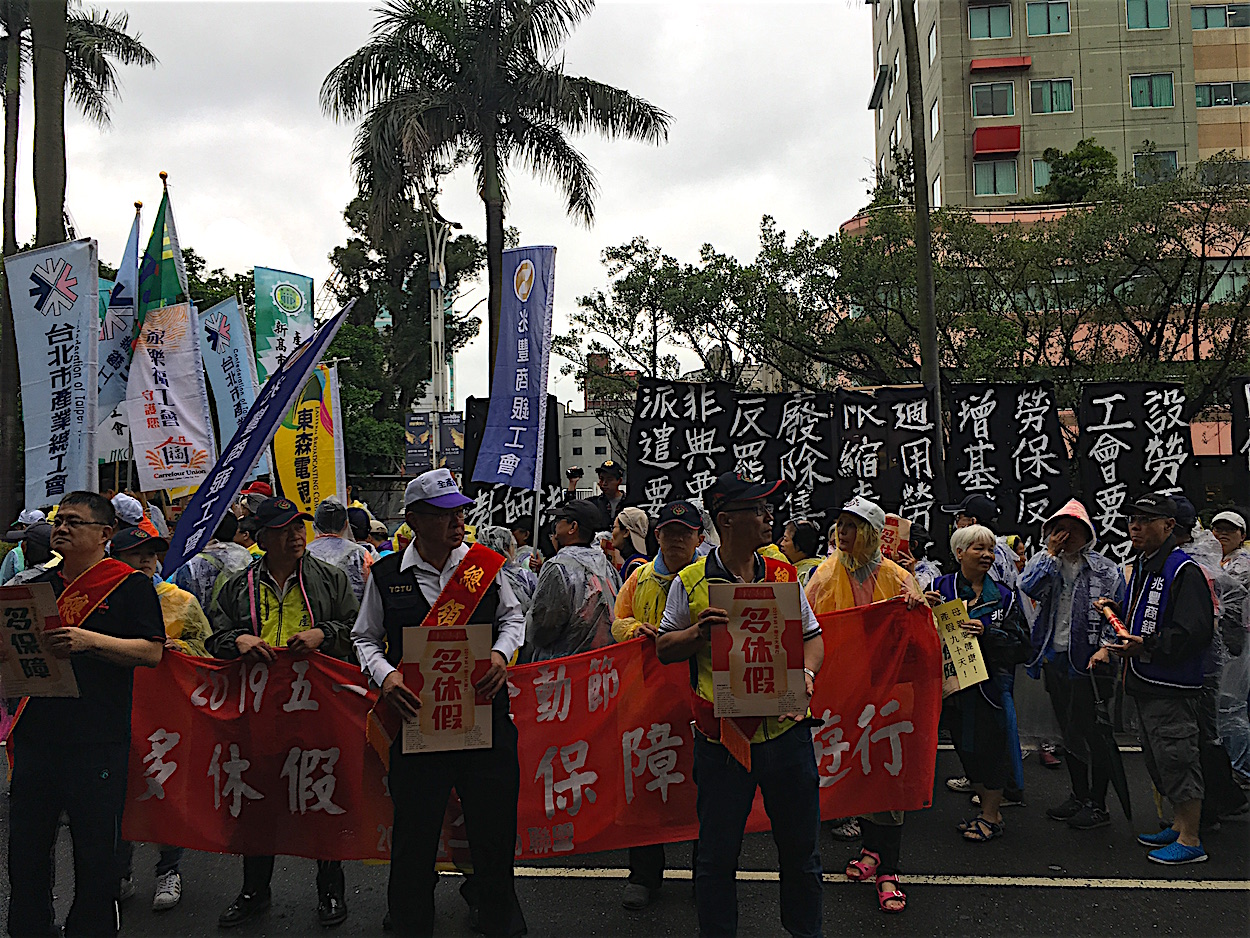 The demonstration marched to the Ministry of Labor, now a short distance away from the Presidential Office by the 228 Memorial Park after a recent relocation, proceeded north past Taipei Main Station, and then southwest past the Legislative Yuan before returning to Ketagalan Boulevard. 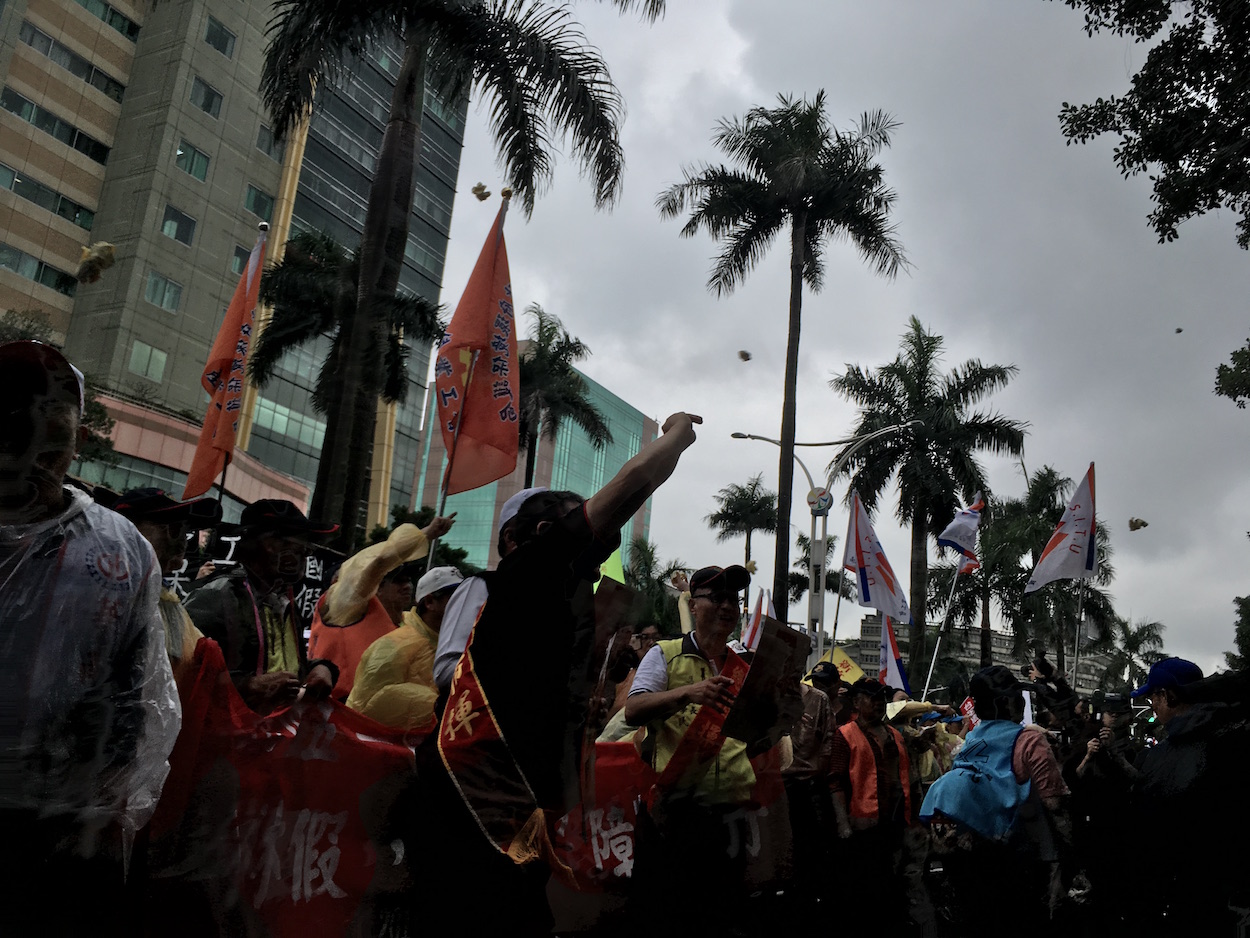 Apart from a musical performance outside of the Ministry of Labor, workers rolled up paper listing their demands and hurled them at the Legislative Yuan when they passed by the building.

Upon returning to Ketagalan Boulevard, bottles of Yakult were handed out to workers because Yakult is commonly referred to in Chinese as, “多多”, meaning “More”—and this was what workers were demanding in terms of greater protections and more days off. Bottles of Yakult handed to workers with velcro attached to them were assembled into the characters “休假” or “Holiday.” Signs with demands of “More Days Off” (多休假) and “More Protections” (多保障) were also handed out among workers through the course of the demonstration. 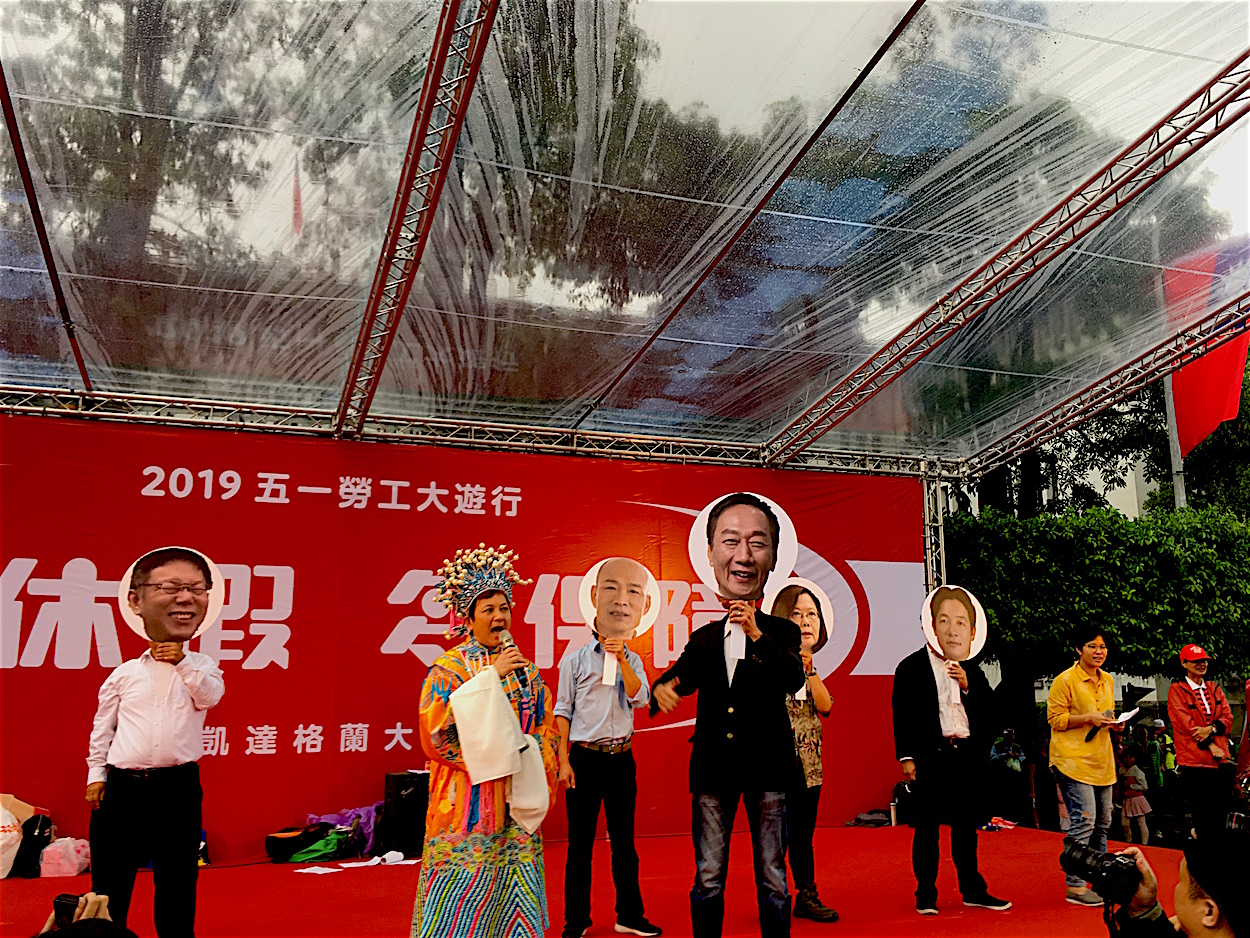 At the same time, a skit was conducted on Ketagalan Boulevard, citing that presidential elections are next year. With much discussion in past months regarding Terry Gou’s sudden announcement that he intends to run for the presidency, Gou claiming that the sea goddess Mazu came to him in a dream and told him to run, a skit was performed in which the head of the Chunghwa Telecom union dressed as Mazu and other workers wore masks and the characteristic clothing of presidential contenders including Gou, Kaohsiung mayor Han Kuo-yu, former premier William Lai, former New Taipei mayor Eric Chu, former legislative majority speaker Wang Jin-pyng, current Taipei mayor Ko Wen-je and current president Tsai Ing-wen. As a sign that workers are critical of politicians hailing from all political camps, Mazu then rejected all of them in turn, citing their actions against workers.

To close off the rally, bottle rockets were then fired in the direction of the Presidential Office, though this saw censure from police. 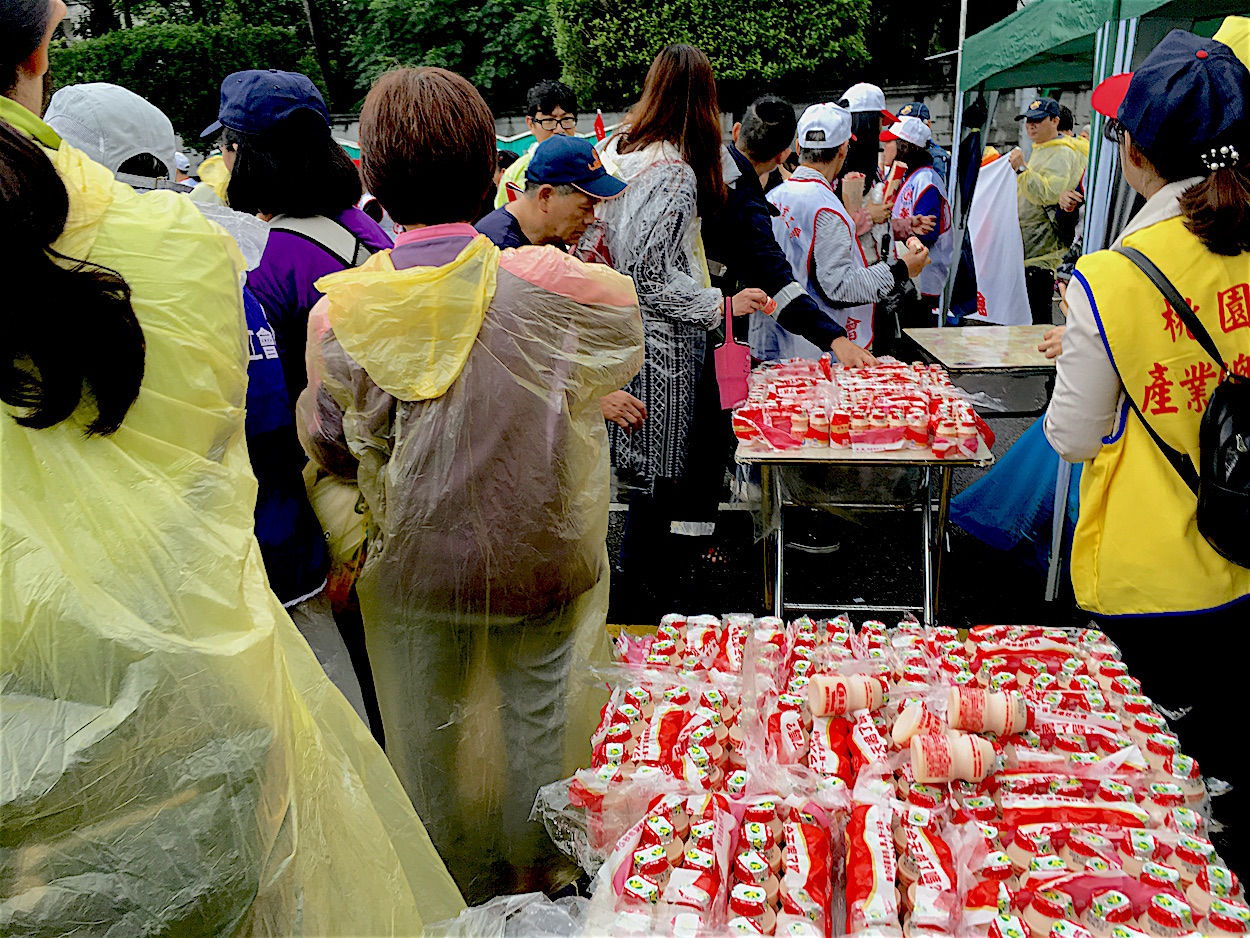 Cans of Yakult being handed out at the demonstration. Photo credit: Brian Hioe

Workers’ demands this year were much the same as with last year’s International Workers’ Day, given general demands for greater protections, a restoration of cut public holidays, and improvements to the pension system in order to maintain basic needs for surviving into retirement for all workers.

However, with calls from politicians and officials that legislation should be passed requiring strikes to be announced ahead of time after the disruptions caused by a strike by China Airlines pilots earlier this year, a new demand of workers this year is that such legal measures should not be passed, seeing as this would greatly undercut the effectiveness of wildcat strikes. This could again become an issue in the near future, with EVA flight attendants set to vote on a decision as to whether to strike or not on May 13th. 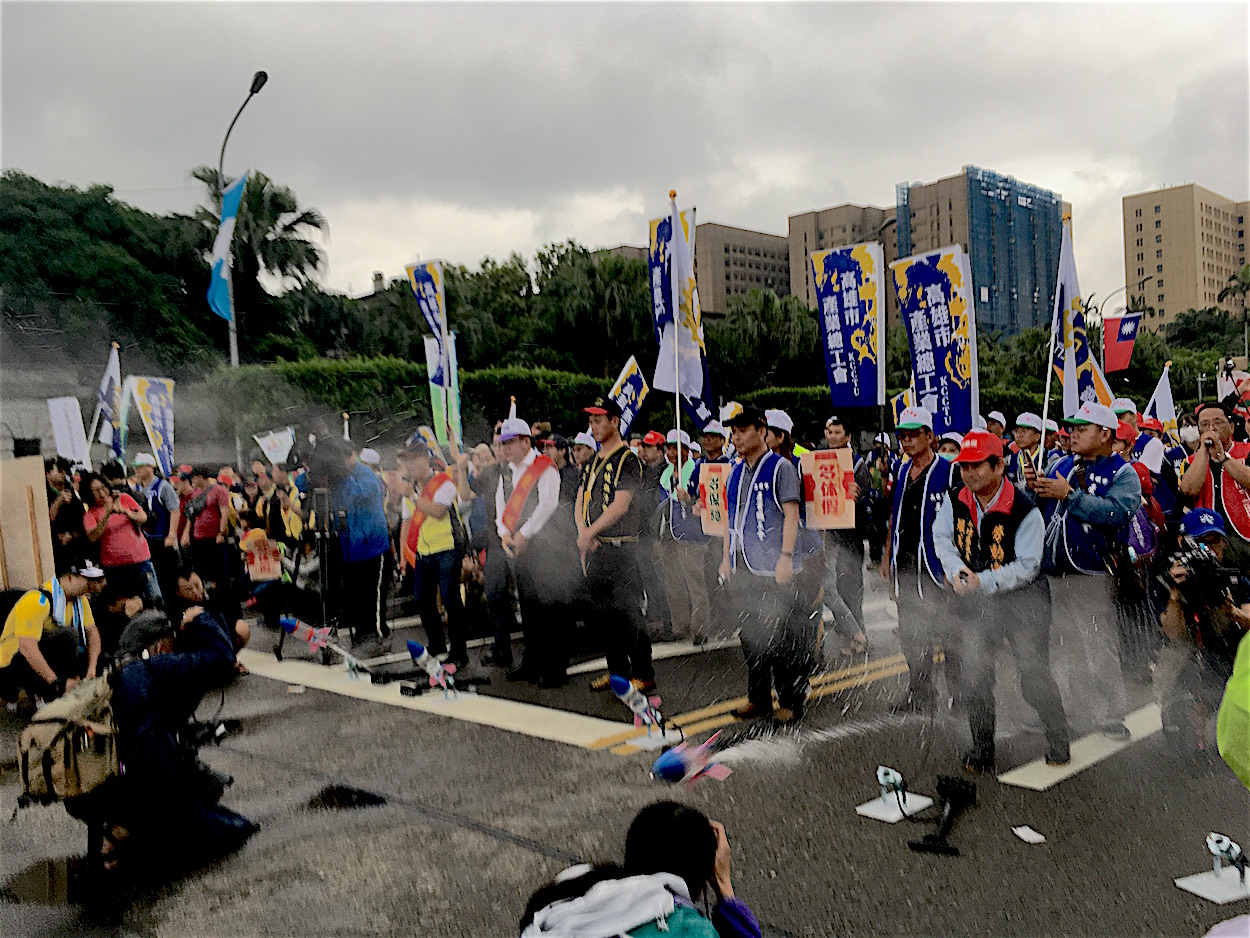 Workers likewise opposed proposed amendments to the Teacher’s Act, which has come under heavy fire because a set of changes intended to remove unfit teachers, such as teachers who are abusive, would strengthen administrative power over teachers. It is claimed that this reducing the ability of teachers to defend themselves if they are demoted, make it difficult for teachers to find jobs if fired, and could infringe upon academic freedoms. 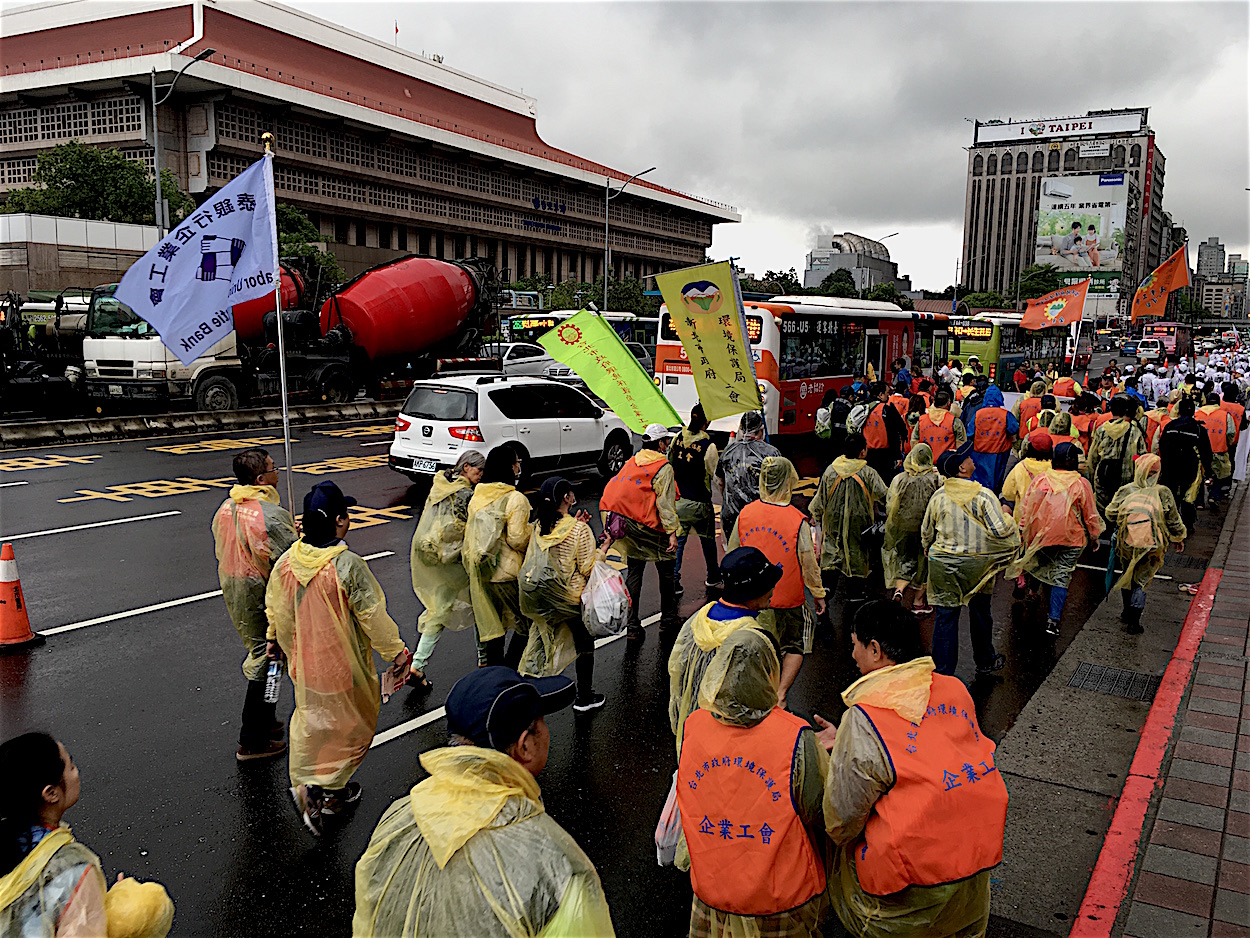 Nevertheless, this year’s demonstration was likely smaller than last year’s International Workers’ Day demonstration, likely because the Tsai administration’s unpopular changes to the Labor Standards Act and the intensive demonstrations against this were still fresh in the memories of workers. This year’s lack of any significant topicality was probably a contributing factor as to the lower numbers, much as how exhaustion after the heated protests regarding the Labor Standards Act resulted in historically small numbers for “Autumn Struggle,” Taiwan’s other major day of labor demonstrations apart from International Workers’ Day last year. Autumn Struggle had the lowest attendance numbers in the history of the event last fall.

As such, whether the next year before elections sees a high point or an ebb in labor militancy remains to be seen. This will become clear in the coming days and months.