The march began at the 228 Memorial Park, moving north past Taipei Main Station to Civic Boulevard, heading west past Beimen, and finishing at the Nishi Honganji Square in Ximending. At the square, a number of civil society groups set up stalls to inform the public about various social causes Traditional Tibetan Buddhist religious ceremonies were also held at the square, in addition to traditional prayers during the march. 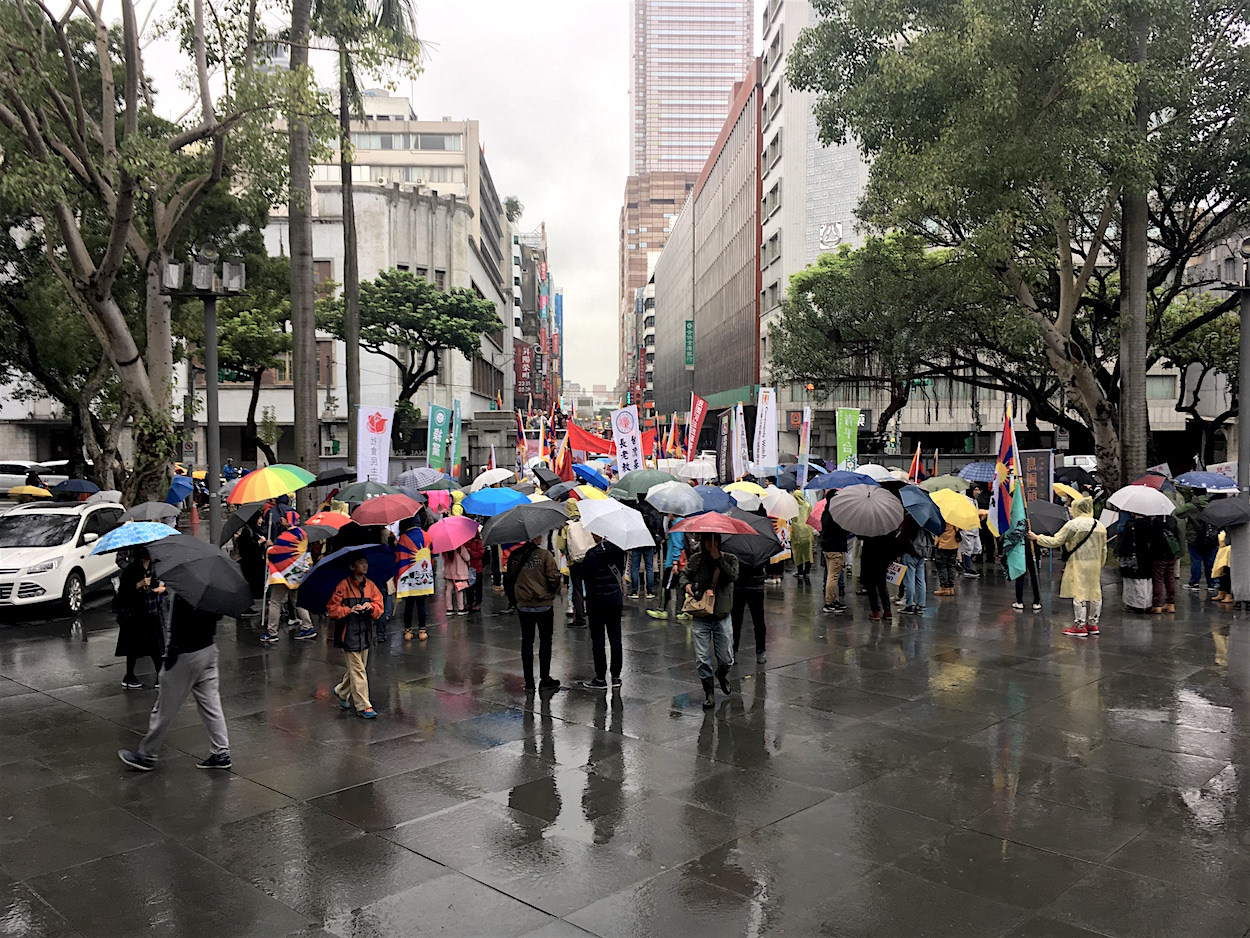 Participants included groups active in organizing solidarity efforts between Taiwan and Tibet, such as the Human Rights Network for Taiwan and Tibet, and representatives of Tibetan exile groups, including Tibetan Buddhist monks. Progressive Taiwanese civil society groups such as the Taiwan Association for Human Rights, Taiwan Alliance to End the Death Penalty, Covenants Watch, Judicial Reform Foundation, and Youth Synergy Taiwan Foundation were also present, as were representatives of the Presbyterian Church, and Chinese democracy activist Wuerkaixi. 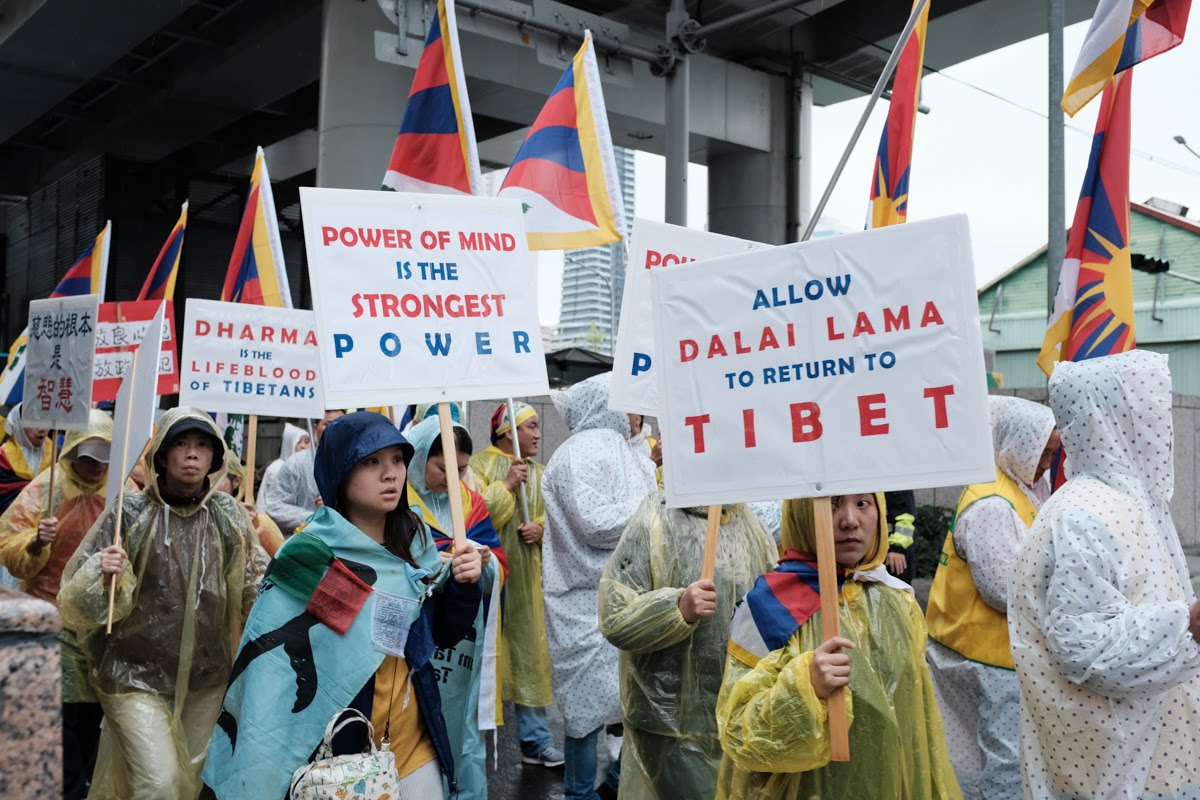 In particular, Freddy Lim of the NPP, who has long been an active supporter of Tibetans in exile, made the announcement today that he intended to invite the Dalai Lama to visit Taiwan. A petition calling for the Dalai Lama to visit Taiwan was formally announced and circulated at the demonstration, with volunteers distributing QR codes for an online petition, and the petition being announced online in tandem with the demonstration today.

It has long been an object of speculation as to whether the Tsai administration would allow a visit to Taiwan by the Dalai Lama for fear of upsetting China. However, in his comments, Lim stated that inviting the Dalai Lama would benefit Taiwan as a way to draw lines between Taiwan and China in terms of international perceptions of the two countries. Miao Poya of the SDP later made similar comments, citing the need for the government to assist in efforts at promoting Tibetan culture in Taiwan by working with members of the Tibetan exile community currently residing in Taiwan. 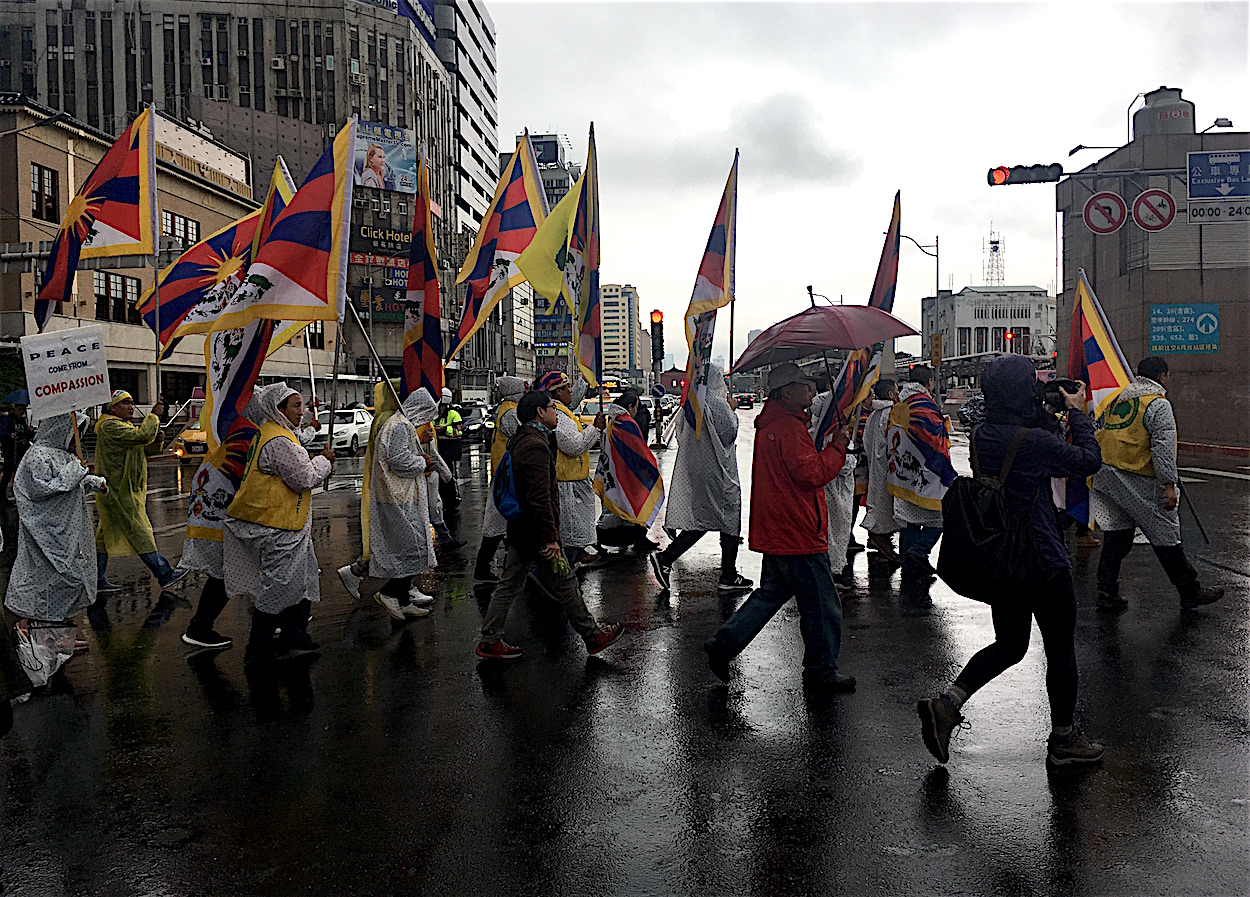 Many speakers at the demonstration today, both Tibetan and Taiwanese, further raised parallels between Taiwan’s 228 Massacre and Tibet’s Tibetan Uprising Day. Many speakers also brought up and criticized the notion of Taiwan signing a peace treaty with China, as currently pushed for by the KMT, as being a means by which the KMT hoped to sign away Taiwan’s democratic freedoms. Tibet was cited as an example of the future that Taiwan faced if it became part of China, in line with the KMT’s calls for the political unification of Taiwan and China.

More generally, demonstrators called on the CCP to end its military occupation of Tibet, to allow Tibetans the right to self-determination over the land they have historically occupied before Chinese military conquest, and criticized the CCP for its repression of Tibetan Buddhism. 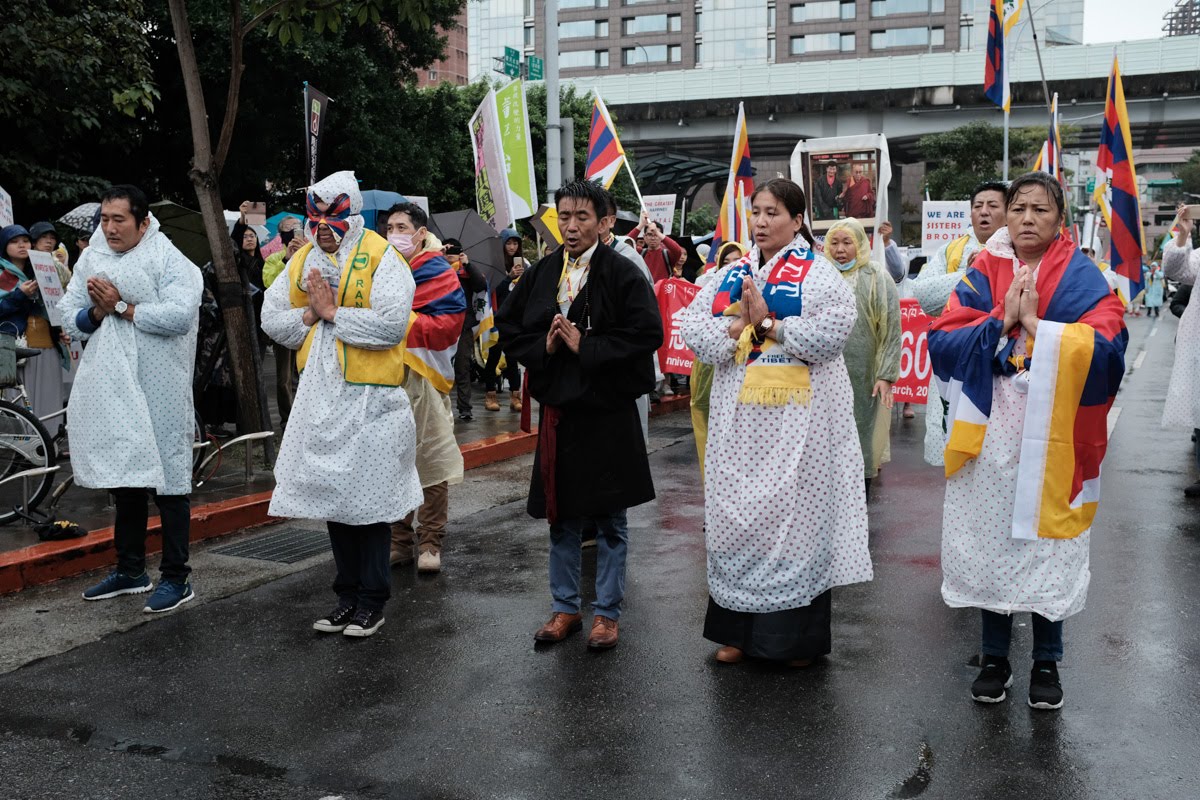 Speakers at the demonstration also criticized China’s repression of organized religion, as observed in the recent destruction of the world’s largest cliff-carved Guanyin statue, and raised the issue of harassment of Tibetans abroad by Chinese, such as protests by Chinese student groups against the election of a Tibetan student council president in Canada.

That being said, however, Tibetan participants of the demonstration emphasized that they were not against Chinese themselves, stating that they have Chinese allies, and citing that the CCP also oppresses Han Chinese, not to mention Tibetans, Uighurs, and other minority ethnic groups. That they are not prejudiced against Chinese citizens themselves has been something that Tibetan activists in Taiwan have been at odds to emphasize for many years, although the CCP tends to claim criticisms of itself as being “anti-Chinese”. 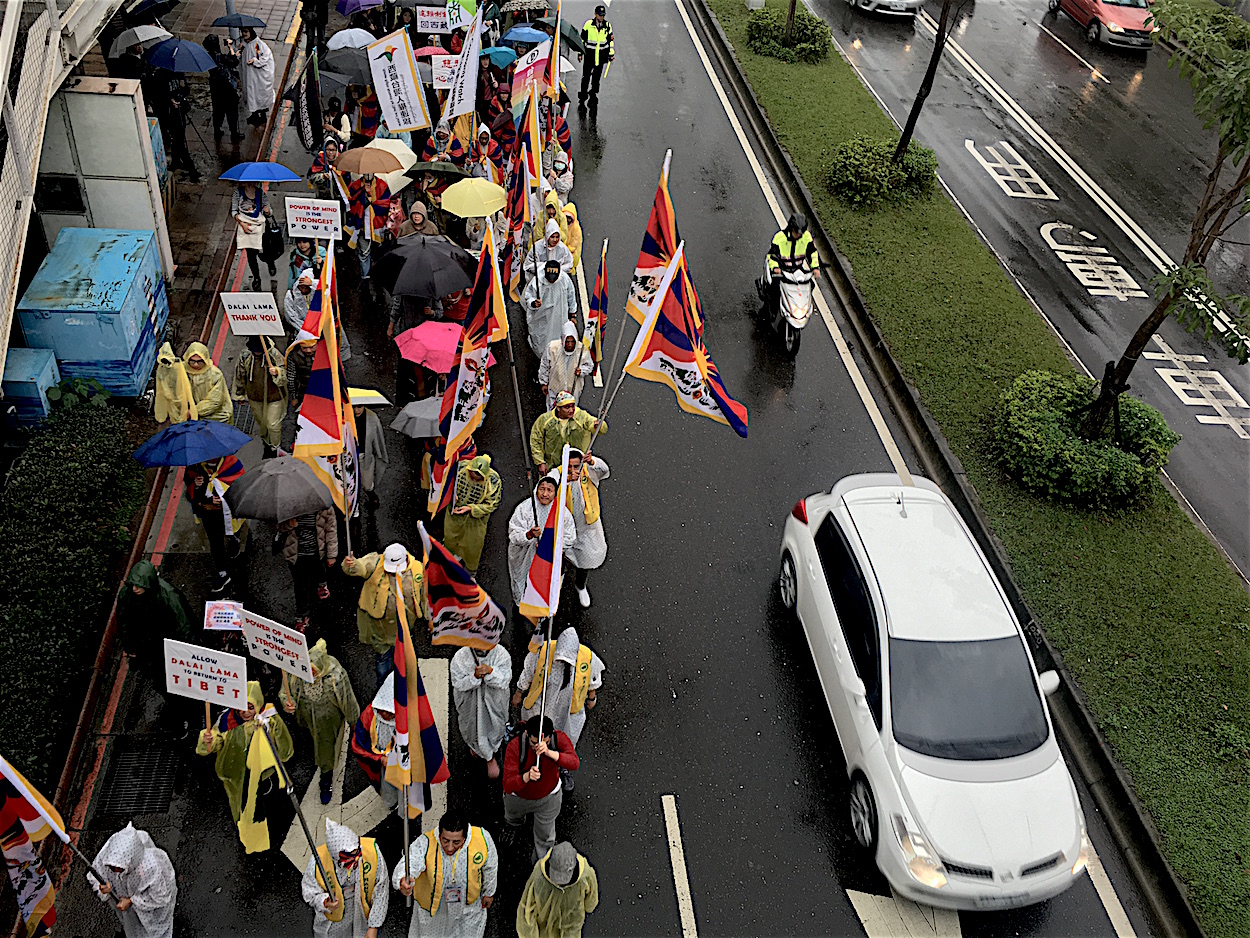 In the meantime, it will remain to be seen whether the call for Taiwan to welcome a visit by the Dalai Lama from Tibetan exile groups in Taiwan, affiliated civil society groups, and Third Force parties will be heeded by the public. How the Tsai administration will respond to this call is also to be seen.

Although Tsai met with the Dalai Lama in 2009, again, the Tsai administration has sometimes been overly cautious with regards to actions that have the potential to upset China. China has threatened Taiwan over a Dalai Lama visit in the past. Yet in past months, the Tsai administration has seen a wave of support for its strong response to a January 2nd speech in which Chinese president Xi Jinping stated that the use of force was still on the table for efforts to unify Taiwan and China. The Ministry of Foreign Affairs has taken more proactive efforts to actively criticize China in the press and on social media in the months since. 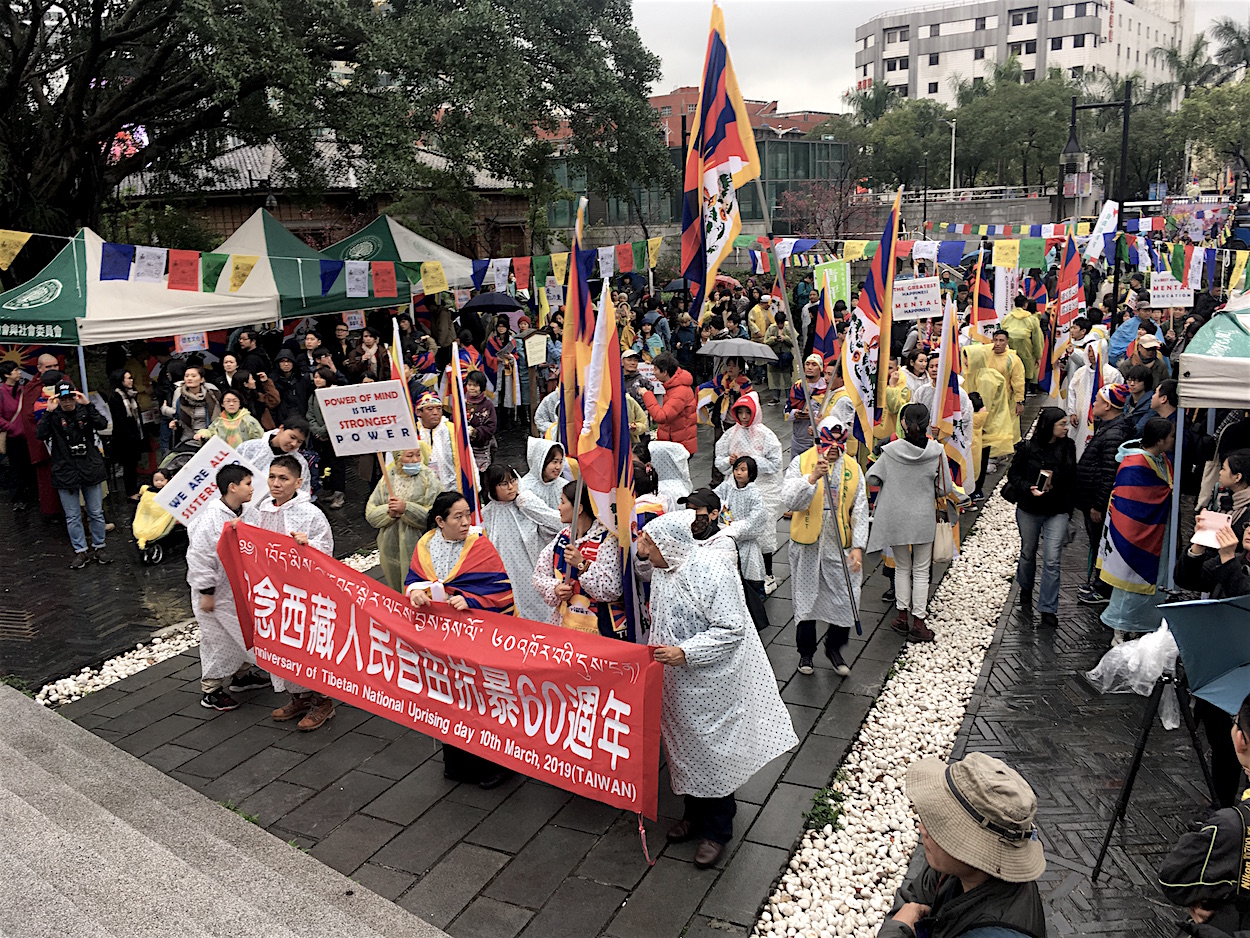 The end of the march at the Nishi Honganji Square. Photo credit: Brian Hioe

As such, it is possible that the Tsai administration may prove more open to the idea of a Dalai Lama visit at present than it has been in the past, though there were rumors in 2015 that Tsai had secretly invited the Dalai Lama to visit Taiwan. Nevertheless, whether the visit occurs may depend on the amount of popular support this petition receives.