Seventy-Two Years After 228, Transitional Justice in Taiwan Is Still Far From Being Realized

ON THE 72ND anniversary of the 228 Massacre, it should be clear that a long path remains to be walked to realize transitional justice in Taiwan. This is visible in a number of recent incidents.

As has perhaps been most widely discussed, the defacement of a Chiang Kai-shek statue at National Cheng Chi University on February 22nd has once again spotlighted the debate of what to do with the numerous symbols of the authoritarian period which are still present in everyday life in Taiwan. Among the most prominent examples are Chiang Kai-Shek statues, which are still present in many parks and school campuses. 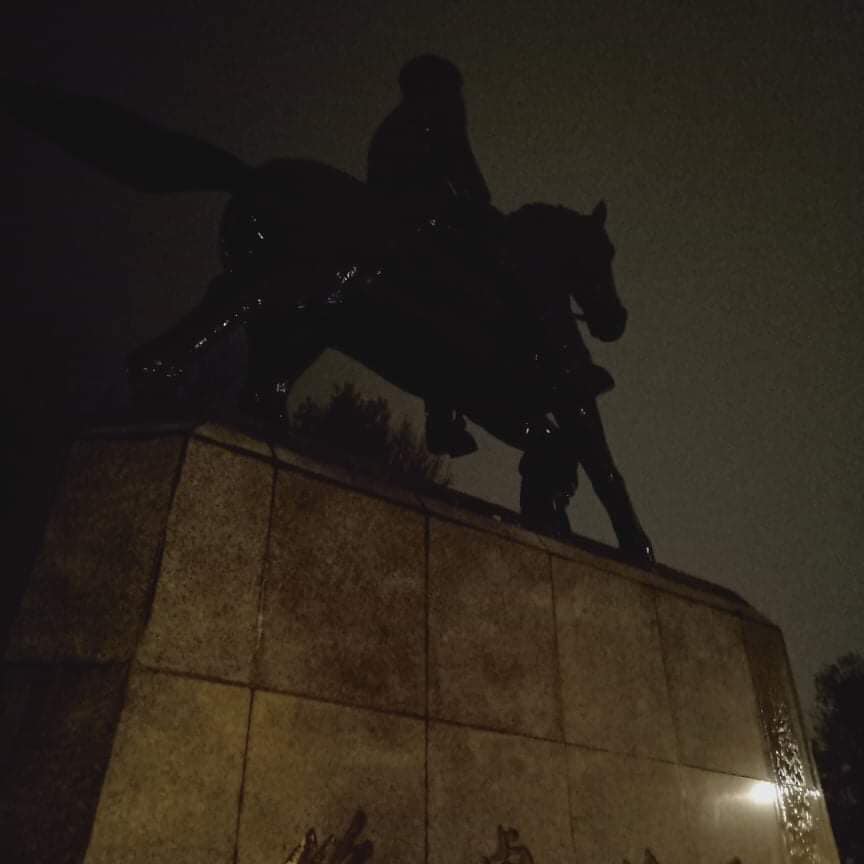 The statue with its missing leg. Photo credit: 公民攝影守護民主陣線/Facebook

Incidents of Chiang Kai-shek statues being defaced take place yearly around the anniversary of the 228 Massacre and other significant dates concerning the White Terror period. The statue defacement at National Cheng Chi University, which a group referring to itself as “Shot for Democracy” took credit for, is this year’s most high profile example.

The defacement at National Cheng Chi University this year involved the removal of the leg of the horse that Chiang Kai-Shek is sitting on. Other defacements have involved decapitating the statue or splashing it with red paint. At other times, the defacement can be humorous in nature, such as dressing the Chiang Kai-shek statue up as a symbol from popular culture. The defacement at National Cheng Chi University is significant because of the fact that the school was long regarded as a KMT party school, as one that Chiang Kai-shek took direct involvement in managing. 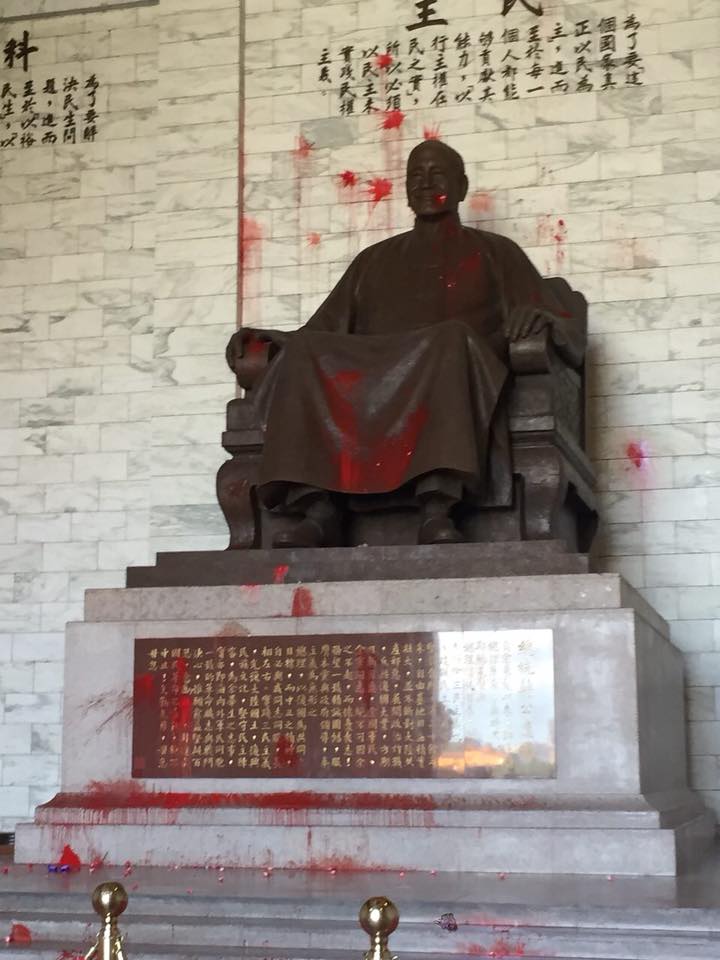 Premier Su Tseng-chang recently cited the cost of dismantling the structure as too expensive to do so. Other suggestions have been that the current structure is turned into a site for the Legislative Yuan, or a museum to the White Terror period.

Nonetheless, while questions of how to rid Taiwan of the traces of the authoritarian period continue to be debated, it should be clear that members of the KMT have yet to reckon with their authoritarian past. In a publicly outraging incident in January, Minister of Culture Cheng Li-chiun was slapped at a dinner by retired entertainer Lisa Cheng, also known as Cheng Hui-chung.

Though Cheng later apologized for the incident, in public comments, she stated that the attack had been premeditated and that her reason for attacking Cheng was because of her view that Cheng was advancing policies aimed at “de-Chiangification”, including the dismantling of the Chiang Kai-Shek Memorial—though this actually involved the Ministry of Culture organizing an exhibition about the White Terror at the Chiang Kai-shek Memorial.

The Chiang personality cult remains alive and strong for some. The incident was particularly outraging because of the fact that Cheng rose to public prominence for documenting oral histories of the White Terror that otherwise would have been lost, yet this led to a physical attack on her from Cheng, and KMT legislators backed Cheng’s attack as justified. By contrast, a number of White Terror and 228 memorial groups condemned the incident.

Other incidents have taken place in the past month. On February 20th, a memorial column in the 228 Memorial Park was broken by members of the Blue Sky Action Alliance, a group of KMT former military veterans. Likewise, a statue of Taiwanese democracy activist Ng Chiau-tong in Taoyuan was splashed with red paint on February 22nd, likely in retaliation for the defacement of the Chiang Kai-shek statue at National Cheng Chi University two days earlier.

KMT veterans have also announced a rally outside Chiang Kai-shek’s mausoleum in Cihu to “protect” the mausoleum during 228. “White Wolf” Chang An-lo, the leader of the China Unification Promotion Party, a former gangster, and a former killer of political dissidents for the KMT who has largely gone unpunished, would himself demonstrate against the Tsai administration with a theatrical protest involving a coffin, though Chang humorously fell into the coffin during a struggle with the police.

Efforts to commemorate 228 and to address the unresolved history of the White Terror continue to be organized both by the government and civic groups. More than 60 civic groups held a march on February 25th to commemorate the 228 Massacre, spotlighting youth group.

The 228 Memorial Foundation has stated that it will release its third version of its investigative report into the 228 Massacre in July. The Gongsheng Music Festival, which has in the past been Taiwan’s largest 228 commemoration event but which has seen a sharp decline in attendance since the Tsai administration took power, will also be held for the seventh time today.

To this extent, the Tsai administration has stated that it, too, intends to release a third report on the 228 Massacre later this year. This will include a third list exonerating individuals who were unjustly punished or put to death. However, one anticipates the KMT to resist actions to deal with Taiwan’s authoritarian past within the legislature. 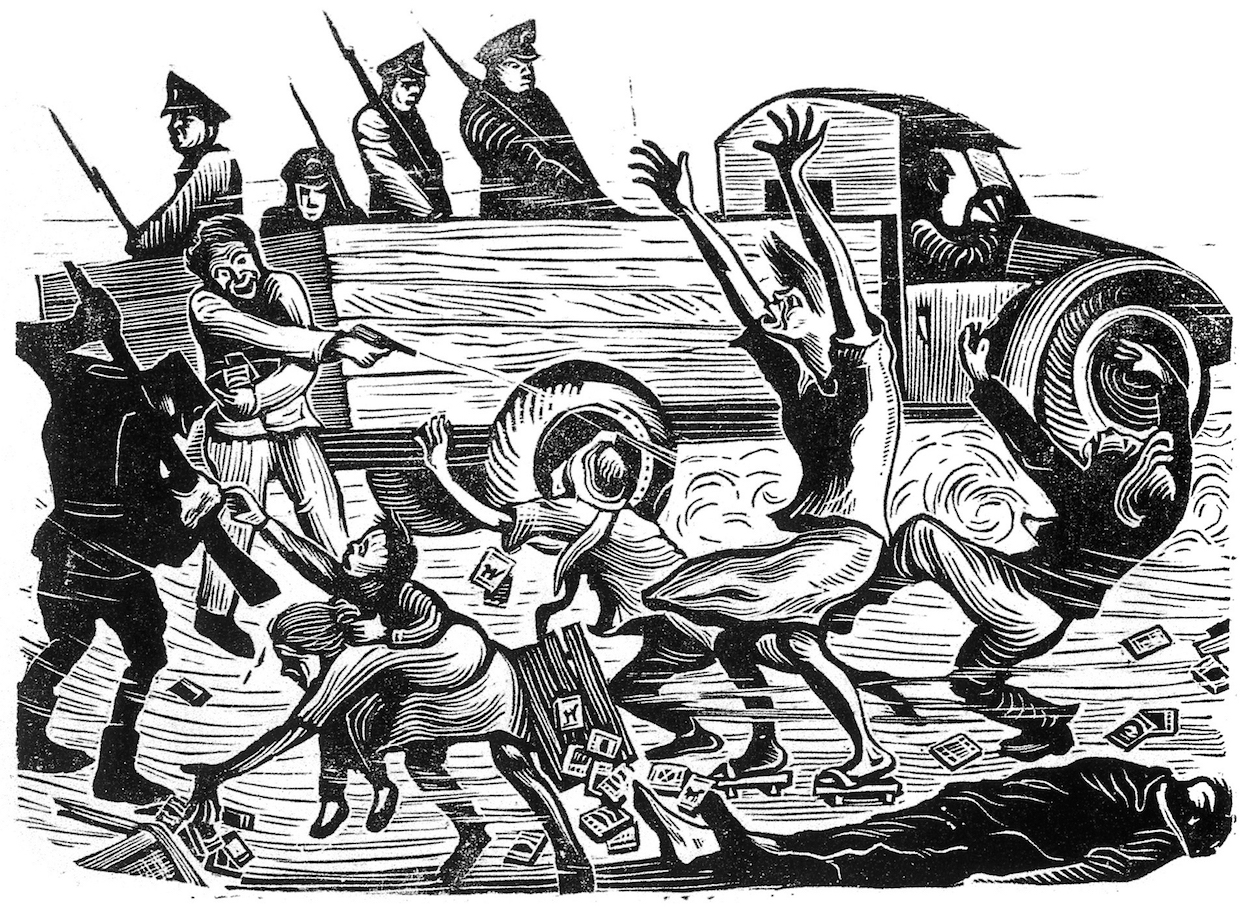 Efforts to realize transitional justice for 228 continue, then, seventy-two years later. It may be a long time yet until there can be any true historical redress for the 228 Massacre, if this can be achieved at all.