ANGER HAS broken out after the KMT disrupted a meeting of the Judiciary and Organic Laws and Statutes Committee confirming the budget of the Transitional Justice Commission and its plans for the upcoming year. The KMT was protesting the appointment of Yang Tsui as chair, of whom the KMT has sought a legal injunction to try and prevent the appointment of, but which was turned down by the Taipei High Administrative Court.

A picture of KMT members knocking over a table and looking as though they intended to hit Yang subsequently went viral on the Internet, further stoking outrage. Yang, a well-known history professor, is the granddaughter of the leftist writer Yang Kui, who was persecuted by KMT during the authoritarian period, as well as the mother of noted Sunflower Movement activist Denis Wei. Yang Kui, who wrote the socialist realist novel The Newspaper Man, was imprisoned for twelve years in 1949 for advocating for the release of political prisoners. 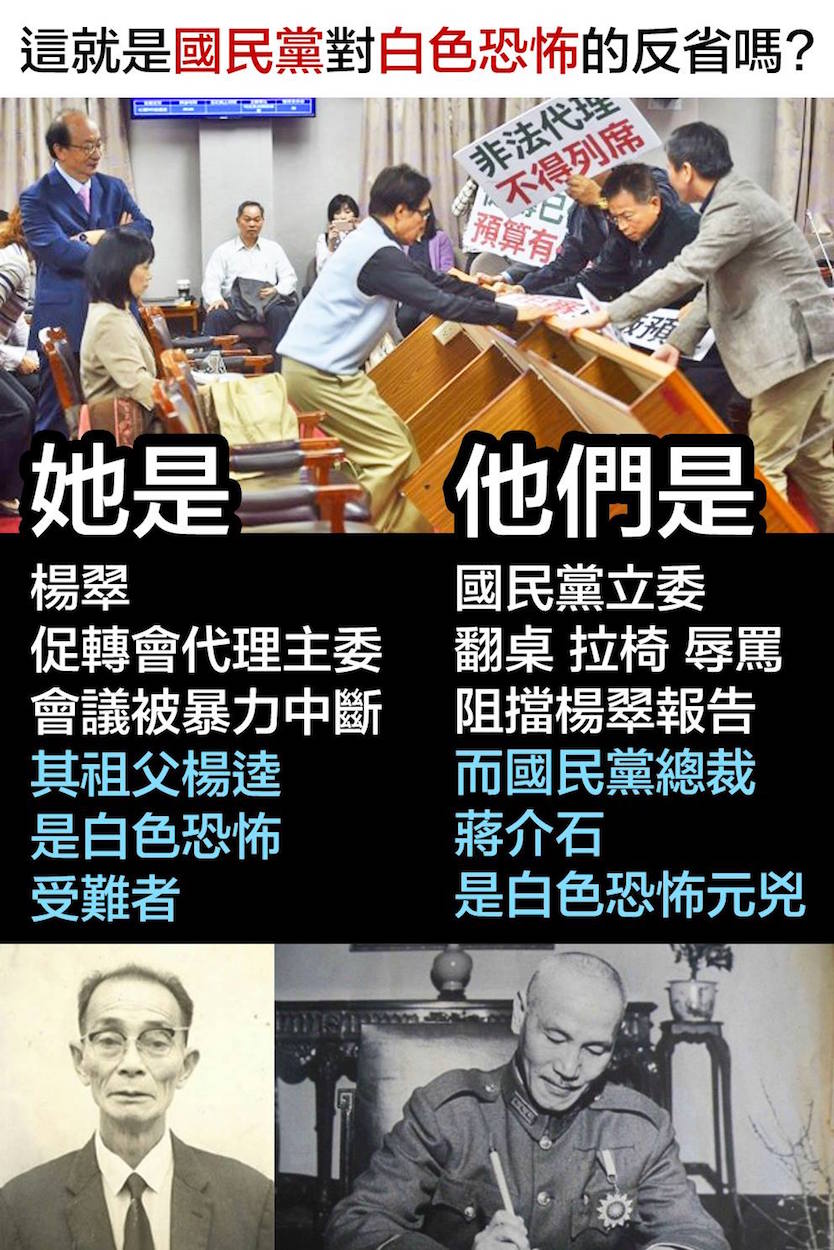 One version of the photo which has gone viral online. Photo credit: Taiwan Fugue/Facebook

It has not gone unnoticed that this scene appears as though members of the KMT, who carried out the White Terror during the authoritarian period, were attempting to attack the family member of a victim of White Terror political persecution—all the while as KMT members decry themselves to be the true victims of political persecution with regards to the Transitional Justice Commission’s probe into their past crimes. To this extent, it proves further ironic that the meeting disrupted by the KMT took place on International Human Rights Day and the 39th anniversary of the Kaohsiung Incident. The latter was an incident in which the KMT cracked down on demonstrations that had grown out of the first large-scale celebration of International Human Rights Day in Taiwan, and which was used as a justification by the KMT to crack down on opposition lawmakers.

As a result of disruptions by the KMT, the meeting was adjourned after thirteen minutes by Chou Chun-mi, the DPP legislator who co-chairs the Judiciary and Organic Laws and Statutes Committee.

The Transitional Justice Commission has suffered some blows to its credibility in past months after deputy chairman Chang Tien-chin made comments suggesting that the commission should try to influence public opinion in upcoming elections by raising the past record of the KMT’s New Taipei mayoral candidate Hou You-yi. As a high-ranking police official, Hou presided over the series of events which led to the self-immolation of publisher “Nylon” Deng Nan-jung, remembered as Taiwan’s “father of free speech.” However, it is generally an issue in Taiwan that many culprits of crimes during the authoritarian period never faced charges and continue to be active figures in public life well into the democratic period, as a result of which, it is very hard to call them to task for their past crimes in the present.

After a recording of Chang’s comments was leaked to the media by another member of the commission, Chang and other senior Transitional Justice Commission officials were forced to resign, leading Yang Tsui to take up a position as chair of the commission.

The KMT has also adopted the strategy of posing legal challenges to both the Transitional Justice Commission and the ongoing probe into illicit party assets from property seizures during the authoritarian period that the KMT retained into the transition to democracy. This has been successful in some cases. This can be observed in the lifting of the assets freeze on the Chinese Women’s League after a ruling by the Taipei High Administrative Court, and a legal challenge to the Act Governing the Handling of Ill-gotten Properties by Political Parties and Their Affiliate Organizations—which was the mandate for the creation of the Ill-gotten Party Assets Settlement Committee—that is now set to head to the Supreme Administrative Court, the appellate court for the Taipei High Administrative Court, for a constitutional interpretation.