Public Outcry After Award-Winning Baker Declares Himself to Be from “Taiwan, China”

SHOCK HAS broken out in Taiwan after baker Wu Pao-chun made an online statement that he was born in “Taiwan, China” and that he was proud of being Chinese. Wu is currently seeking to expand his chain of bakeries to China, hence why his remarks may not surprise. However, Wu’s remarks were shocking because his achievements as a baker had previously made him an object of national pride.

In particular, Wu won the title of Master Baker in the 2010 Bakery Masters competition, which is held every three to four years in Paris as an international, invitational bakery competition. Wu’s achievements were seen as something to celebrated for Taiwan, perhaps not unlike how Taiwanese athletes are celebrated as objects of national pride for their sporting achievements, having been invited by the Presidential Office to meet current president Tsai Ing-Wen. Ironically, despite his success as a baker, Wu is actually allergic to flour.

Wu subsequently capitalized on his newfound fame to open a bakery in his native Kaohsiung. After two years, Wu opened subsequent locations in Taipei and Taichung. In 2018, he sought to expand to Singapore and China. 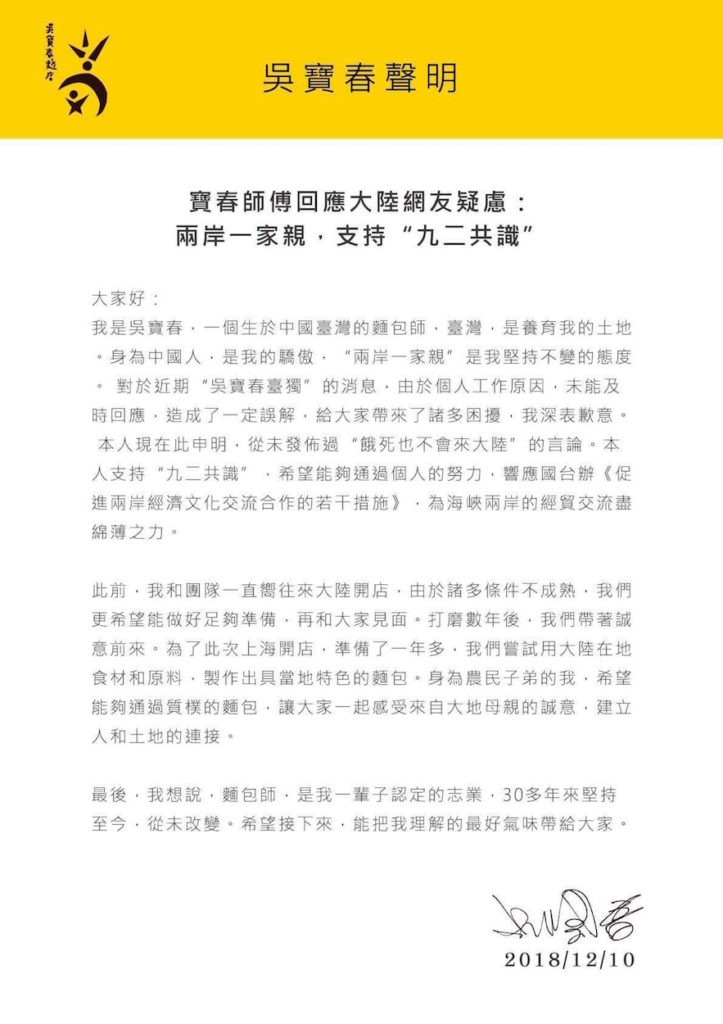 Statement by Wu declaring that he saw himself as Chinese

With his expansion efforts in China, Wu was attacked by Chinese netizens, however, with the accusation that Wu was pro-Taiwanese independence because of 2016 comments by Wu stating that he was not solely focused on the Chinese market, but was focused on international expansion as a whole.

It is far from uncommon for Taiwanese seeking to work in China or to conduct business in China to be targeted by nationalistic Chinese netizens, who may comb through the history of such individuals in order to draw out past statements that they accuse of being indicative of support for Taiwanese independence. Taiwanese are particularly liable to be targeted by nationalistic Chinese netizens during times in which strains between the countries are particularly visible, such as around when elections take place. For example, 2018 local elections were preceded by an incident in which Taiwanese director Fu Yue declared support for Taiwanese independence at the Golden Horse Award ceremonies at which a number of Chinese actors and directors were present.

But Wu’s actions are far from unusual, seeing as Taiwanese business chains seeking to enter the Chinese market generally have sometimes been compelled to declare that they support the 1992 Consensus, or otherwise affirm that they see Taiwan as part of China. Wu’s statement would not even be the first time that this has occurred in the baking industry, seeing as bakery chain 85°C expressed public support of the 1992 Consensus after criticisms from Chinese netizens following a visit by Taiwanese president Tsai Ing-Wen to an 85°C location in Los Angeles during a visit by Tsai to the United States in August 2018. Notably, 85°C was also an open supporter of the CSSTA trade agreement to be signed with China during the 2014 Sunflower Movement. 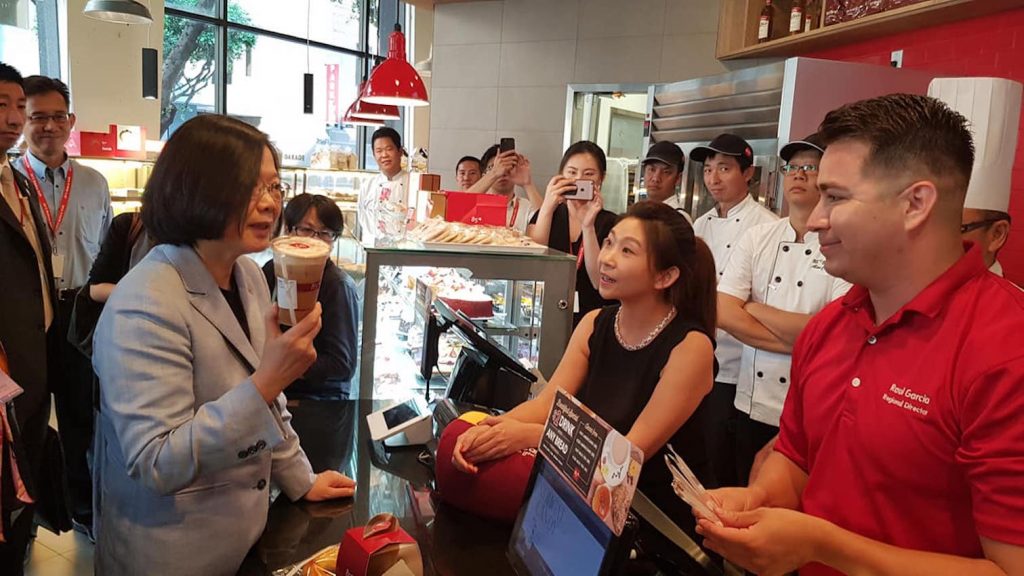 Tsai while visiting an 85°C location in Los Angeles during a visit to the United States in August 2018. Photo credit: 基隆.蔡適應/Facebook

Nevertheless, part of the reason why Wu’s comments have provoked such a large response is that Wu is in some way perceived to have changed identification after the results of 2018 local elections. The results of 2018 elections saw the KMT resurgent, which the KMT claims to be the product of Taiwanese dissatisfaction with the Tsai administration’s handling of cross-strait relations and support for the 1992 Consensus. It has been surprising to many that the KMT has been able to turn areas long held by the DPP, such as in Wu’s native Kaohsiung, which was handily won by KMT mayoral candidate Han Kuo-yu. Wu has appeared alongside in Han in public appearances in which Wu defend himself as simply being a baker and not too focused on politics.

And so some question whether Wu’s statement is the sign of a new trend. This remains to be seen. Either way, nationalistic Chinese may find themselves emboldened by their successes in compelling Taiwanese to declare themselves Chinese. Their victory with Wu and the resultant shock that Wu’s statements have provoked in Taiwanese may simply encourage them to carry out more similar actions in the future.