Will The DPP Lose Its Control Of Taiwan’s Six Special Municipalities?

WITH MAYORSHIP OF all of Taiwan’s six special municipalities up for the vote in 2018 local elections, the DPP looks like it may have a tough time holding onto its current political dominance in four out of the six municipalities. Some take the view that DPP losses in these municipalities will allow the KMT to rebuild momentum, which is why DPP losses could be worrying. The final set of rallies for both political camps are set to take place today across Taiwan.

Taiwan’s six special municipalities are Taipei, New Taipei, Taichung, Kaohsiung, Tainan, and Taoyuan. The DPP currently controls Kaohsiung, Tainan, Taoyuan, and Taichung. Taipei is currently held by politically independent mayor Ko Wen-je, who enjoyed the DPP’s endorsement when he was elected into office in 2014, although he is now running again without the DPP’s endorsement. New Taipei remains the only special municipality under KMT control, which is why the KMT is so intent on retaining control of it. 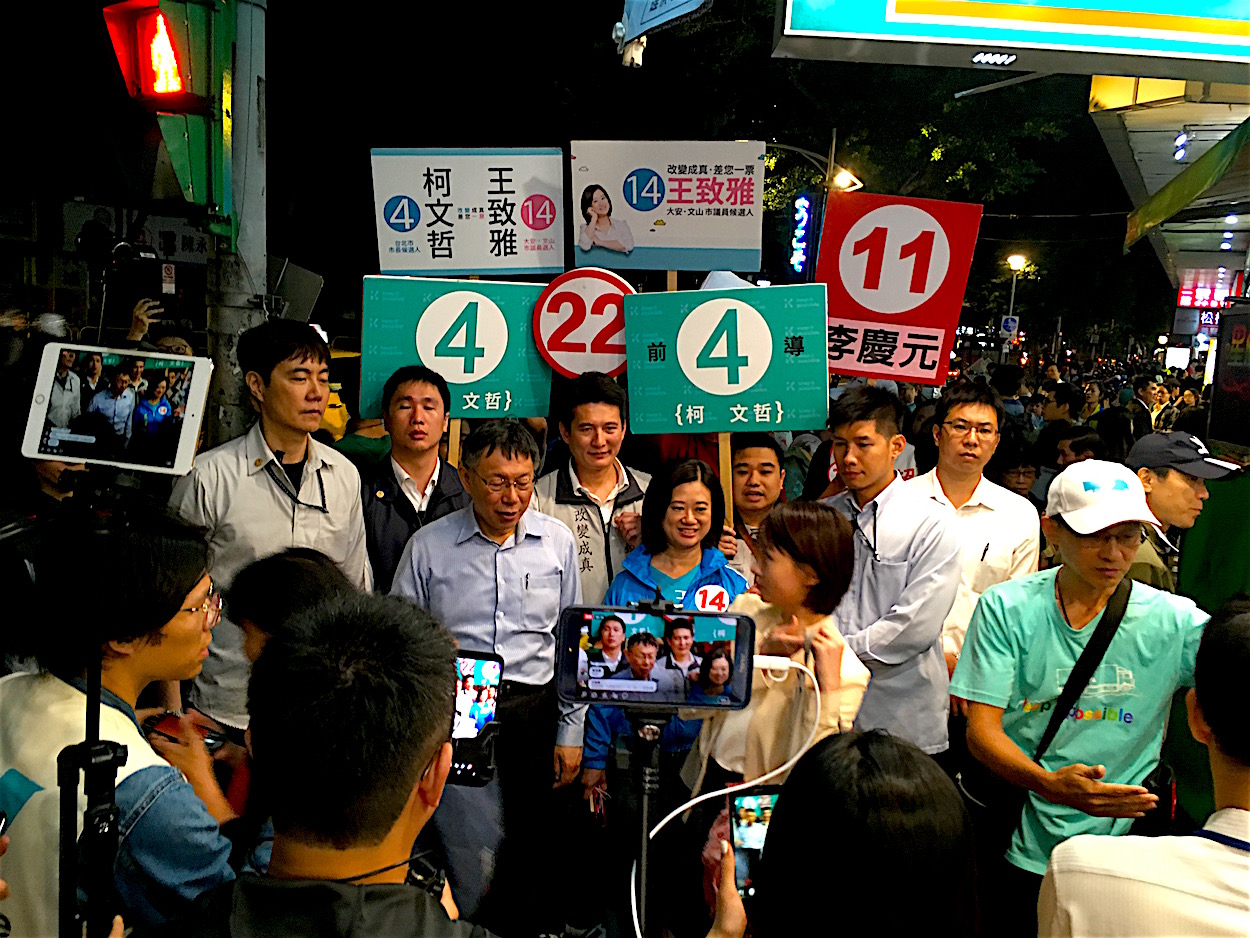 That Ko will defeat both Pasuya Yao of the DPP and Ting Shou-Chung of the KMT was thought to be all but certain for most of the election season. Many in the pan-Green camp see Ko as having drifted closer to the pan-Blue camp in the four years he has held office, as well become increasingly antagonistic to the pan-Green camp. Given his popularity, within the pan-Green camp, there concerns that he could even seek to challenge current president Tsai Ing-Wen for the presidency in 2020.

Antagonism against Ko has led to stronger than expected mobilizations in the past week for DPP candidate Pasuya Yao. As such, although Yao still seems unlikely to win the mayorship, the possibility that he could split the vote with Ko, allowing for a Ting victory, is one that is increasingly thought to be plausible.

The DPP seems set to hold onto its traditional southern stronghold in Tainan, with Huang Wei-cher generally expected to win against KMT candidate Kao Su-po while also fending off political independents such as fringe candidate Mark Lin and former DPP member Su Huan-chih, who decided to run as an independent after failing to secure the DPP nomination. 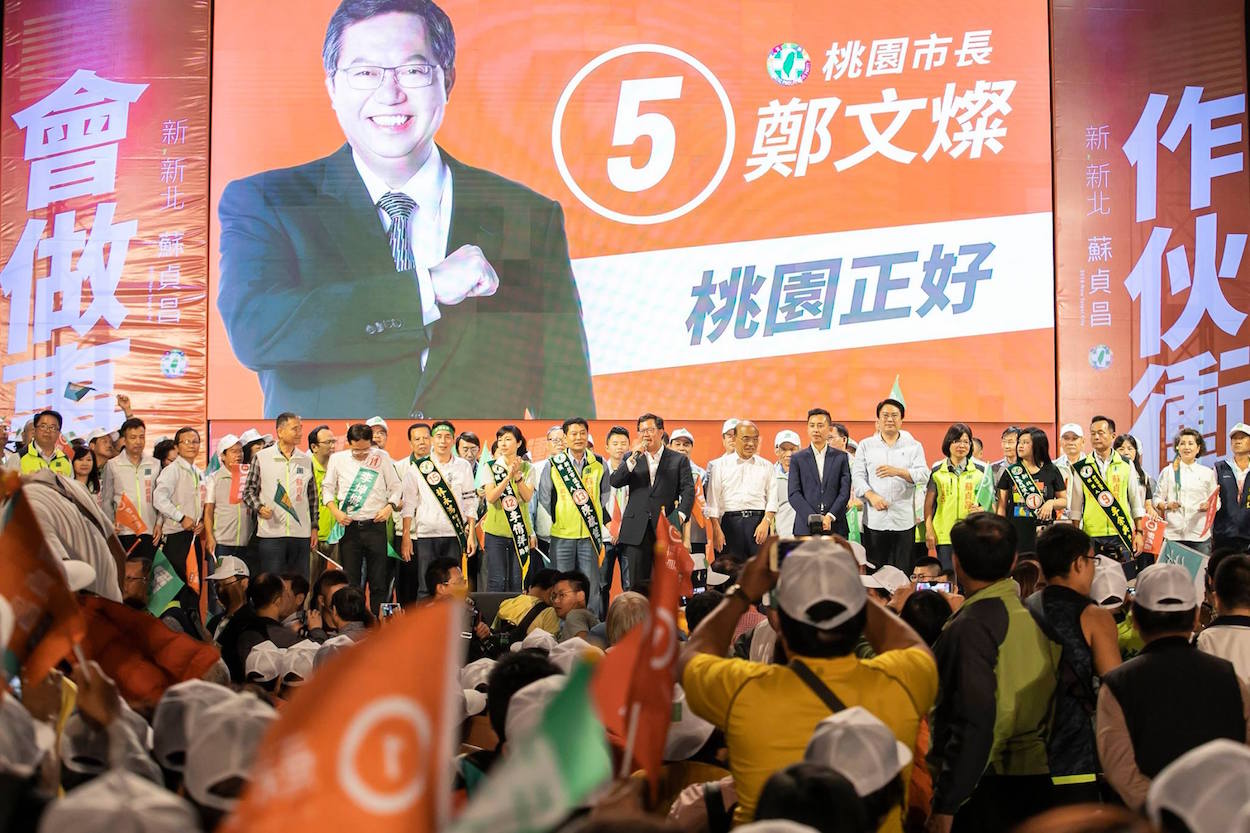 It was a surprise in 2016 that the DPP was able to seize Taoyuan with the victory of Cheng Wen-Tsan, after 13 years of previous KMT control. Based on polling, many expect the DPP to hold onto Taoyuan, with Cheng going up against Apollo Chen of the KMT and independent candidates as labor activist Zhu Mei-xue, who has run on a platform emphasizing the Taiwanese working class. It may be that Apollo Chen has seen too many batterings to his reputation, as evidenced in widespread public mockery of a picture of Chen and KMT chair Wu Den-yih wearing high-waisted pants that went viral on social media in August, leading to rumors that Chen would withdraw from the race.

It seems to be a tighter race in Taichung, with questions of whether incumbent mayor Lin Chia-lung will be able to successfully tout the achievements of his administration against KMT opponent Lu Shiow-yen. Lu has run a campaign emphasizing the poor air quality in Taichung under Lin’s administration, promising to restore blue skies and clean air to Taichung. On the other hand, Lin has pointed to his administration’s reduction of emissions from coal plants in Taichung and touted infrastructure achievements such improving railroads and public transportation, improved illumination in old city districts, development of the soon to open Mitsui outlet mall, and successfully holding the Taichung Flower Expo, which attracted millions of guests. Taichung was another city that the DPP turned in 2016 elections, seeing as Lin’s predecessor as mayor, Jason Hu, was a member of the KMT. 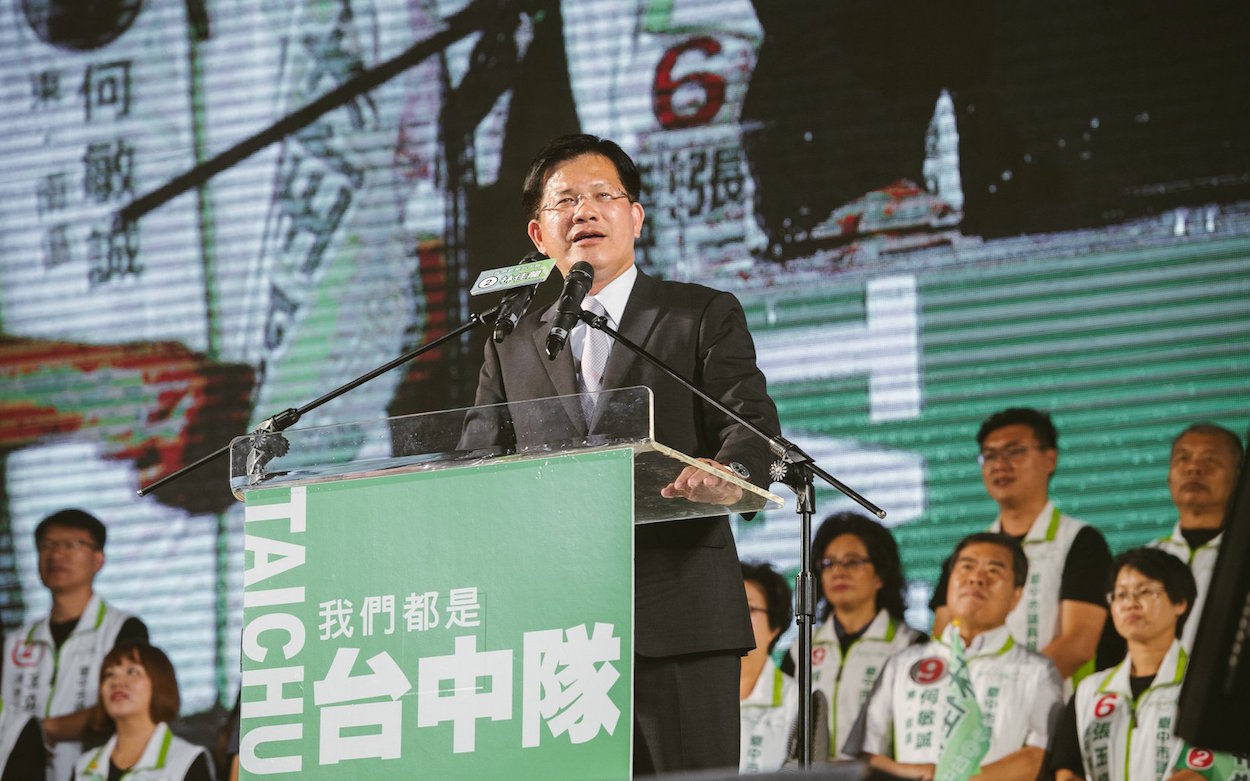 One anticipates that competition will be heated in New Taipei City. KMT candidate Hou You-yi is highly popular, but the DPP’s candidate, Su Tseng-chang is a former DPP chair and presidential candidate. Su is a party heavyweight, and that someone of his stature would run in New Taipei can be seen as indicating the DPP’s strong desire to pry New Taipei away from the KMT. Though Su lagged behind Hou previously, he may be closing the gap with a savvy social media campaign directed towards young people. On the other hand, Eric Chu has groomed a highly capable successor in Hou, who has been able to leverage on his reputation as a well-respected and high-ranking law enforcement officer.

Most widely discussed, however, has been the fact that it seems highly possible the KMT will be successful in prying the southern city of Kaohsiung away from some twenty years of DPP control. The KMT’s Kaohsiung mayoral candidate, Han Kuo-yu, has been unexpectedly popular, which some attribute to Chinese attempts to interfere in Taiwanese elections. Previous DPP mayor Chen Chu, who resigned her post to take up a position as secretary-general of the Presidential Office, was highly popular, but her successor Chen Chi-Mai is much less charismatic as a candidate. Likewise, there was growing dissatisfaction with economic stagnation in Kaohsiung near the tail end of Chen’s administration, and a sizeable portion of the Kaohsiung population consists of older, retired civil servants who were angered by the Tsai administration’s pension reforms. 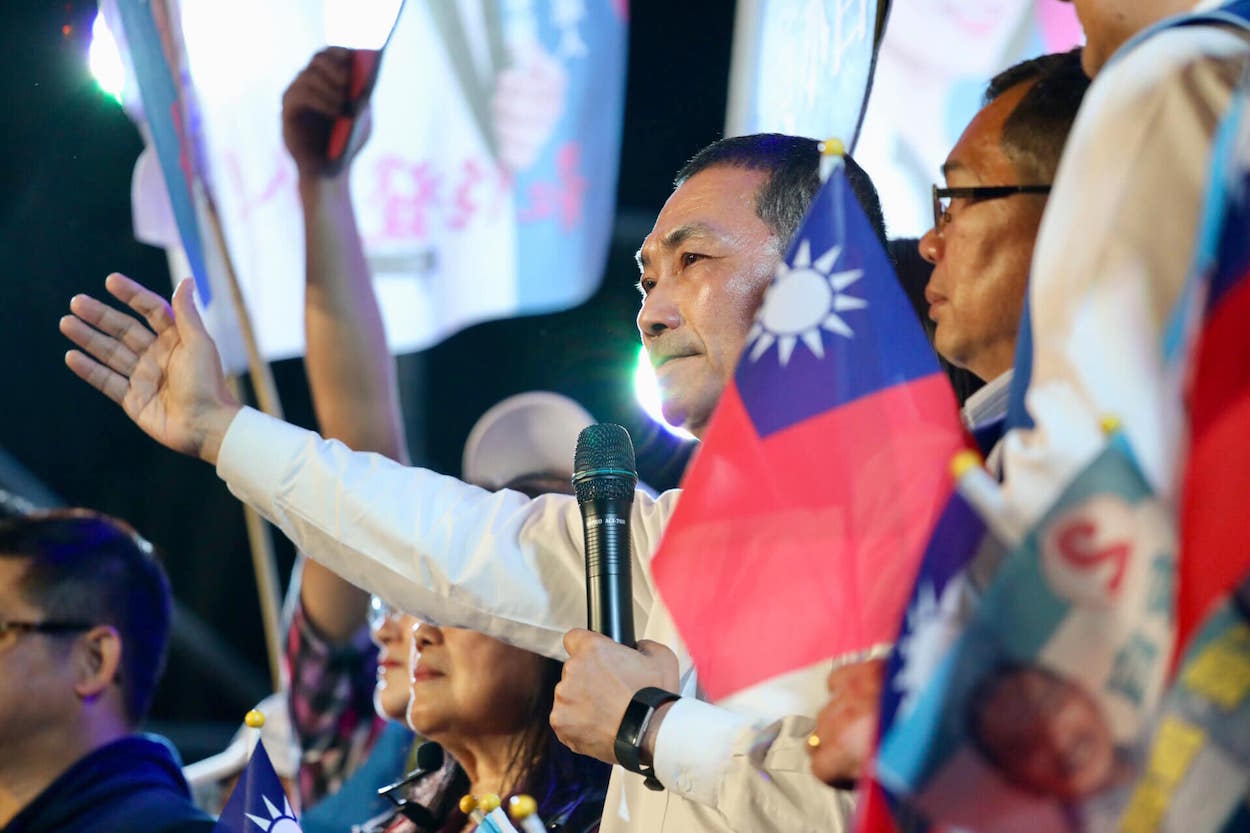 At the same time, some question whether the “Han tide” has turned. This is consideration of Han’s poor performance in two mayoral candidate debates, accusations that Han’s popularity is the result of Chinese election interference, and outrage after KMT chair Wu Den-yih called former DPP mayor Chen Chu a “disgusting sow.”

A worst-case scenario could leave the DPP in control of only Tainan and Taoyuan, and the KMT in control of Kaohsiung, Taichung, and New Taipei. Certainly, control of special municipalities is only one way to measure political influence—for example, even if the KMT takes three special municipalities, it could still lose badly to the DPP in terms of the number of city councilors, lizhang, or other positions that it manages to get into office. 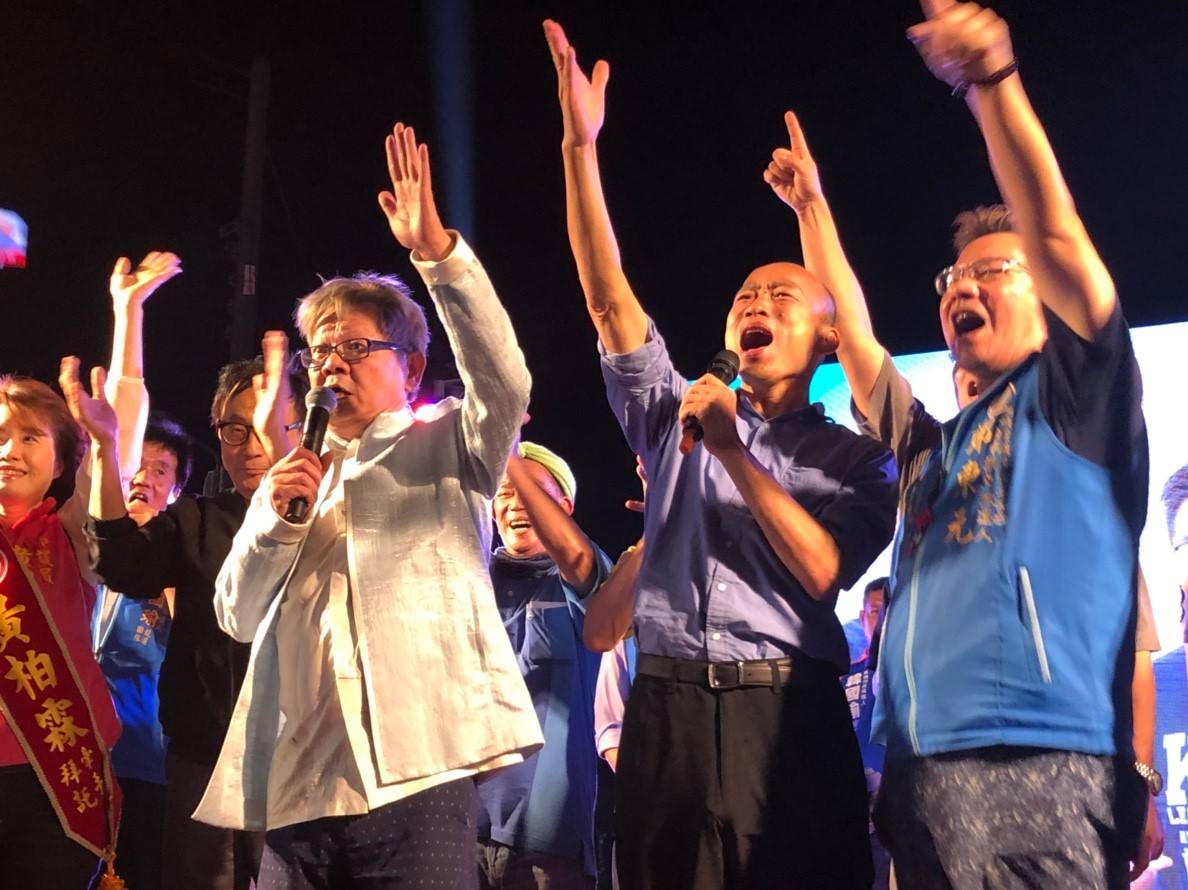 But if such a scenario becomes interpreted in the media as representing a resurgent KMT, the resultant buzz could provide a springboard for some more genuine form of resurgence. One also expects that, even if victorious over Ting, Taipei mayor Ko Wen-je would increasingly drift towards the pan-Blue camp if the pan-Blue camp’s political fortunes seem like they are reversing course, affecting the political orientation of Taipei depending on what the results are. This remains to be seen.