What Will Happen If Progressive Taiwanese Civil Society Is Defeated Through The Referendum?

IN THE YEARS before the Sunflower Movement and afterward, a certain political consensus came to emerge among Taiwanese social movement activists. Namely, despite the fact that issues as support for gay marriage, opposition to nuclear energy, support for environment-friendly, renewable sources of energy, support for referendum reform, and advocacy for Taiwanese independence may have had no inherent relation to each other, these issues were broadly embraced by Taiwanese civil society under the framework of progressive politics.

There may be no single reason as to why this took place, but the primary political cleavage in Taiwanese society may be between independence and unification, with traditional left and right political divisions mapping onto the split between independence and unification. As the conservative social force that progressives were up against was the pro-unification pan-Blue camp, support for progressive values became more broadly mapped onto the pro-independence pan-Green camp. 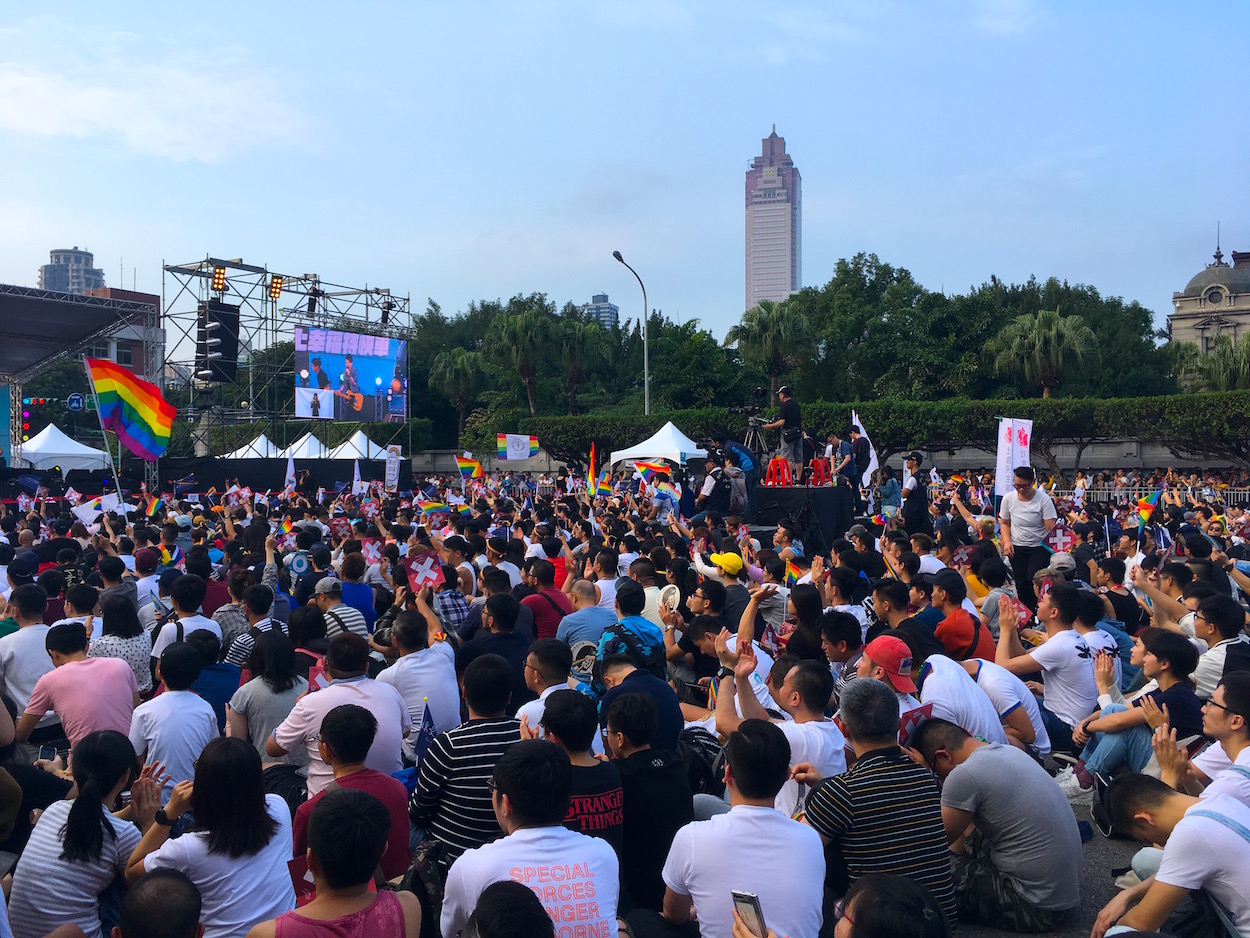 Nevertheless, it is possible that progressive civil society may be headed towards a defeat in upcoming 2018 elections. It was a long-term goal of progressive civil society to push for lowering the benchmarks needed to hold a national referendum. The political referendum was seen as a means of settling questions faced by Taiwan, such as longstanding issues ranging from independence versus unification to nuclear power.

But while progressive civil society may acted as a “vanguard” force which pushed Taiwanese society towards progressive values through events such as the outbreak of the 2014 Sunflower Movement, society may still lag behind in many respects. After all, progressive civil society has found itself in the long-term position of confronting a public which has successively voted the KMT into power several times even after the end of the authoritarian era.

As such, it is wholly possible that referendums on gay marriage, nuclear energy, and Taiwan participating in the 2020 Tokyo Olympics as “Taiwan” rather than “Chinese Taipei” may be voted down, with the public voting against gay marriage, against participating as “Taiwan” in the Olympics, and in favor of nuclear energy. This would be ironic, seeing as it was progressive civil society which pushed for referendum reform, to begin with. But conservative social forces may have been able to use the referendum for their own ends, and the greater resources possessed by conservative social forces can put progressive civil society at a disadvantage. 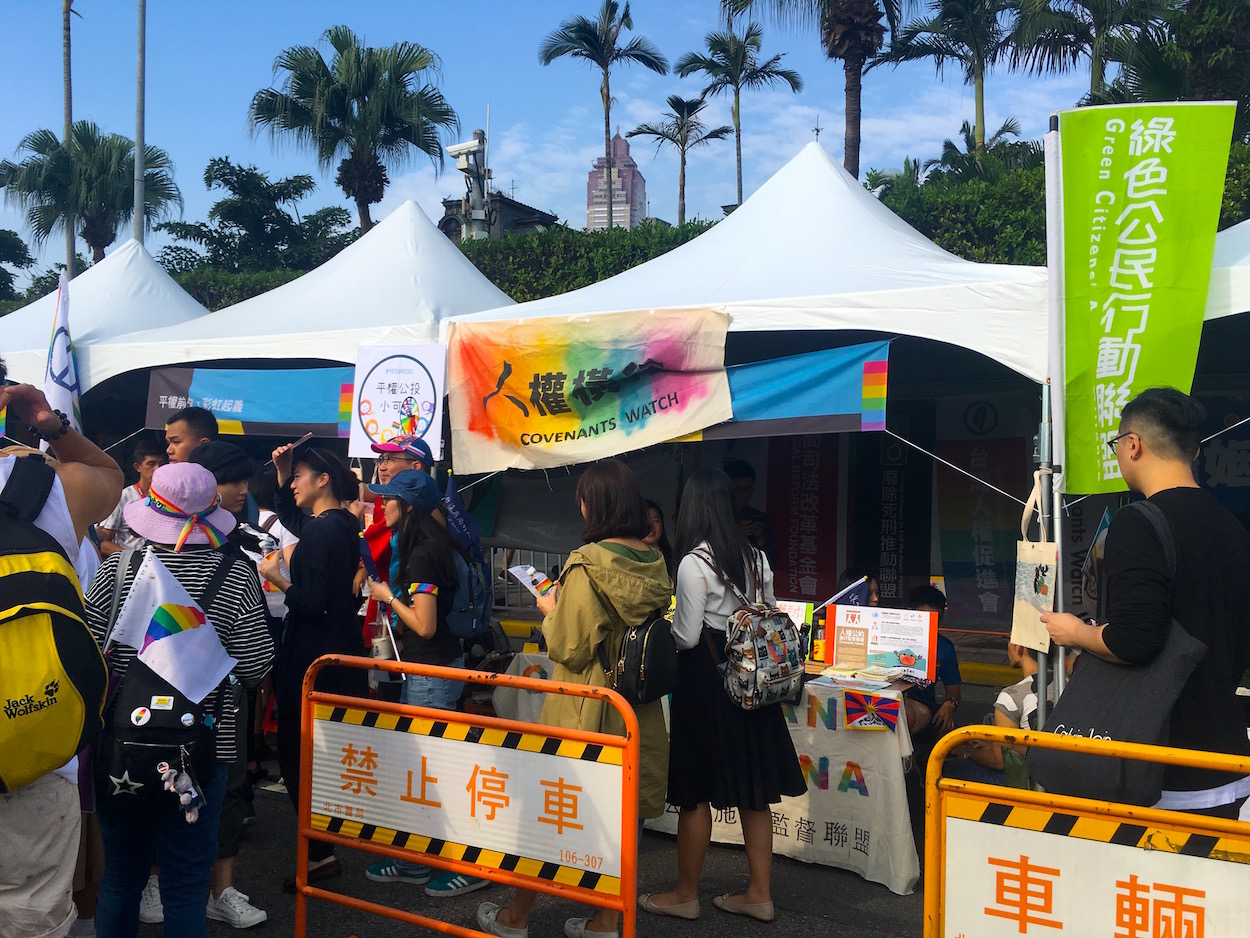 Civil society groups tabling at the gay marriage rally last Saturday. In the center is Covenants Watch, an NGO dedicated to overseeing cross-straits agreements, and on the right is the Green Citizen Action Alliance, an environmental and anti-nuclear group. Photo credit: Brian Hioe

To that end, the Taiwanese public may continue to be divided on the issue of nuclear power because Taiwan has very visibly strained energy needs and other sources of power contribute to worsening problems of air pollution. However, frequent earthquakes in Taiwan and systemic government mismanagement lead to concerns that a nuclear disaster resembling the 2011 Fukushima disaster could very easily take place in Taiwan.

The most popular of the referendum proposals, based on the number of signatures, was the campaign for Taiwan to participate in the 2020 Tokyo Olympics as “Taiwan” rather than “Chinese Taipei.” However, with warnings by the International Olympics Committee (IOC), likely the result of Chinese pressure, that this could lead to Taiwanese athletes not being allowed to participate in the Olympics altogether, this has led some Taiwanese athletes to call on the public to vote down the referendum. It is possible that the public will blame the organizers of the referendum, instead of rightfully placing the blame on Chinese bullying internationally. 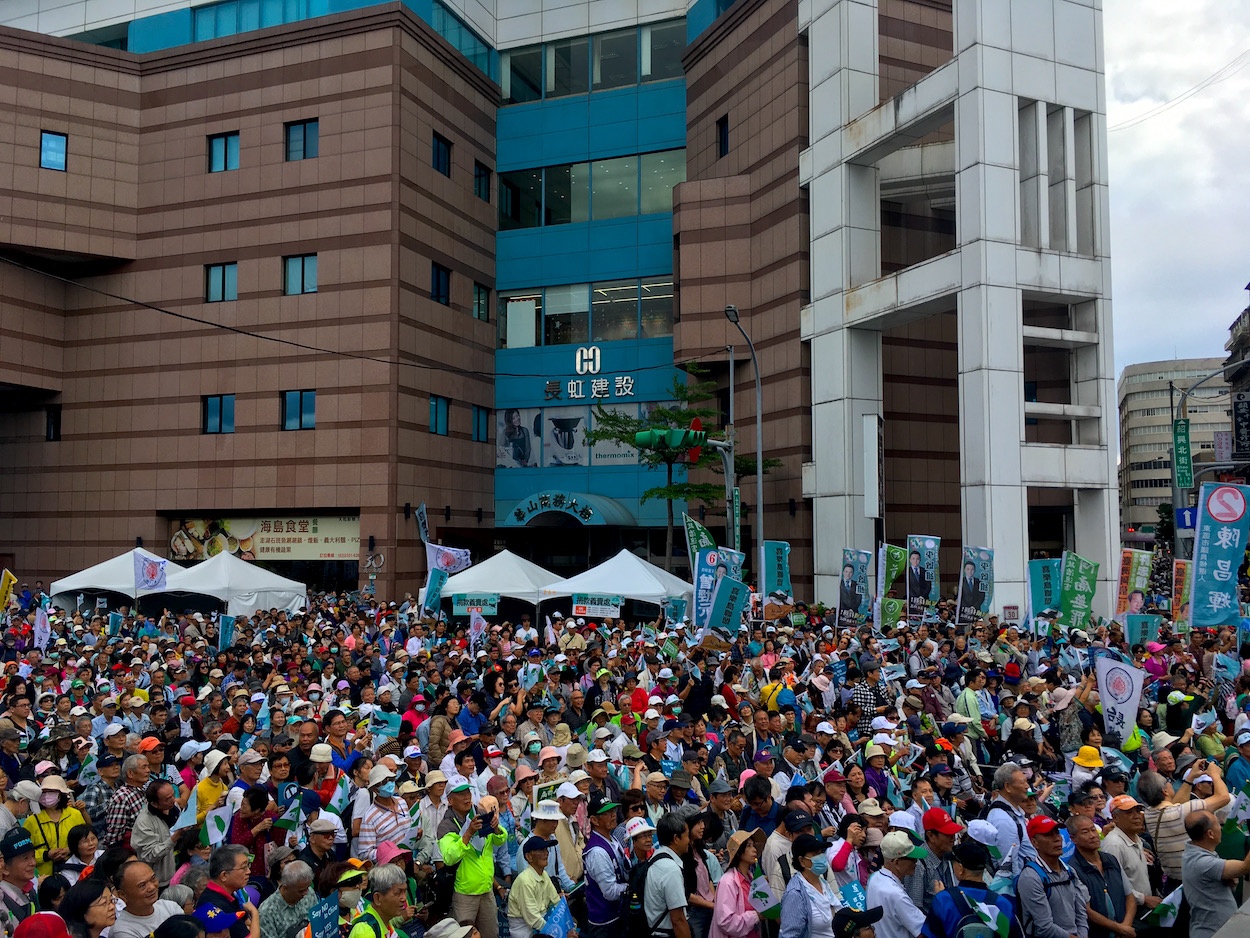 What, then, if all three referendums supported by progressive civil society are voted down? For one, one expects to see a legal challenge to the referendum on marriage equality, with the assertion that basic human rights cannot be voted on, and that consequently, this referendum is not binding. Instead, the ruling of the Council of Grand Justices in May 2017 that same-sex marriage had to be legalized in two years will be asserted as superior to anything legally binding about a national referendum, even if the ruling was based on an interpretation of the constitution, and it is also a constitutional right to hold a national referendum in Taiwan. Or this claim may be based on the fact that changes to the Referendum Act in December 2017 did not allow for referendums on changing the constitution and marriage is a constitutional right, even if the Central Election Commission already agreed to allow the referendum proceed in spite of this.

At the same time, one expects that a negative referendum result on gay marriage will provoke a sense of crisis among the marriage equality movement, possibly leading to a revival of street protests for the movement, as took place in the months before the ruling by the Council of Grand Justices.

Likewise, if Taiwanese voters vote for the preservation of nuclear power, one expects that this might provoke a sense of crisis, leading to a revival of the Taiwanese anti-nuclear movement in a manner one has not seen in the past two years of the Tsai administration. 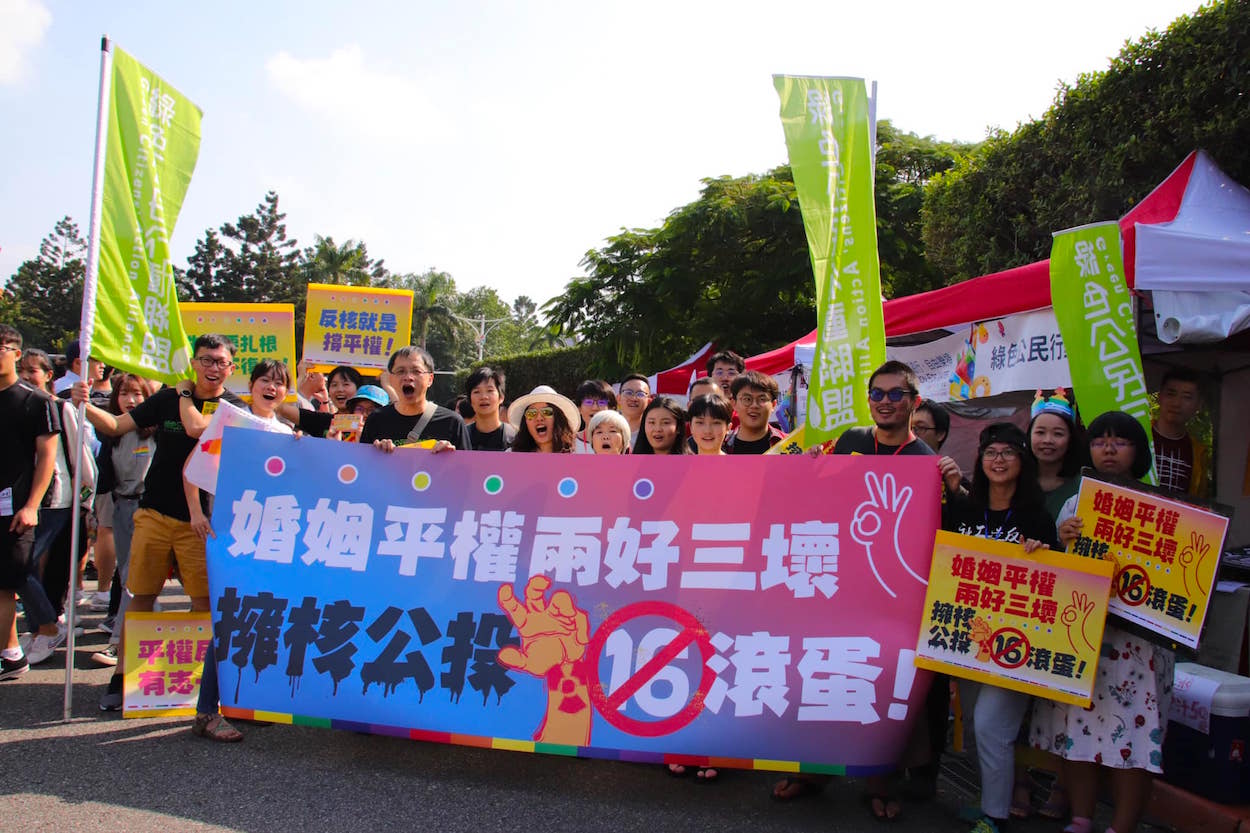 The KMT is a strong force behind the push for the referendum on nuclear energy, and it has taken a strong stance in favor of nuclear energy. The DPP, a party with a history of environmentalism going back to its roots in the Taiwanese democracy movement, has historically taken a stance opposed to nuclear energy while the KMT, a party deeply wedded to the nuclear lobby in Taiwan, has favored nuclear energy.

As a result, despite the fact that the DPP Tsai administration has quietly approved nuclear restarts, because of the fact that the anti-nuclear movement has historically been tied to the pan-Green camp, this did not provoke any sense of crisis which led to widespread mobilizations. This could occur again if the referendum result ends up ruling in favor of the preservation of nuclear energy. 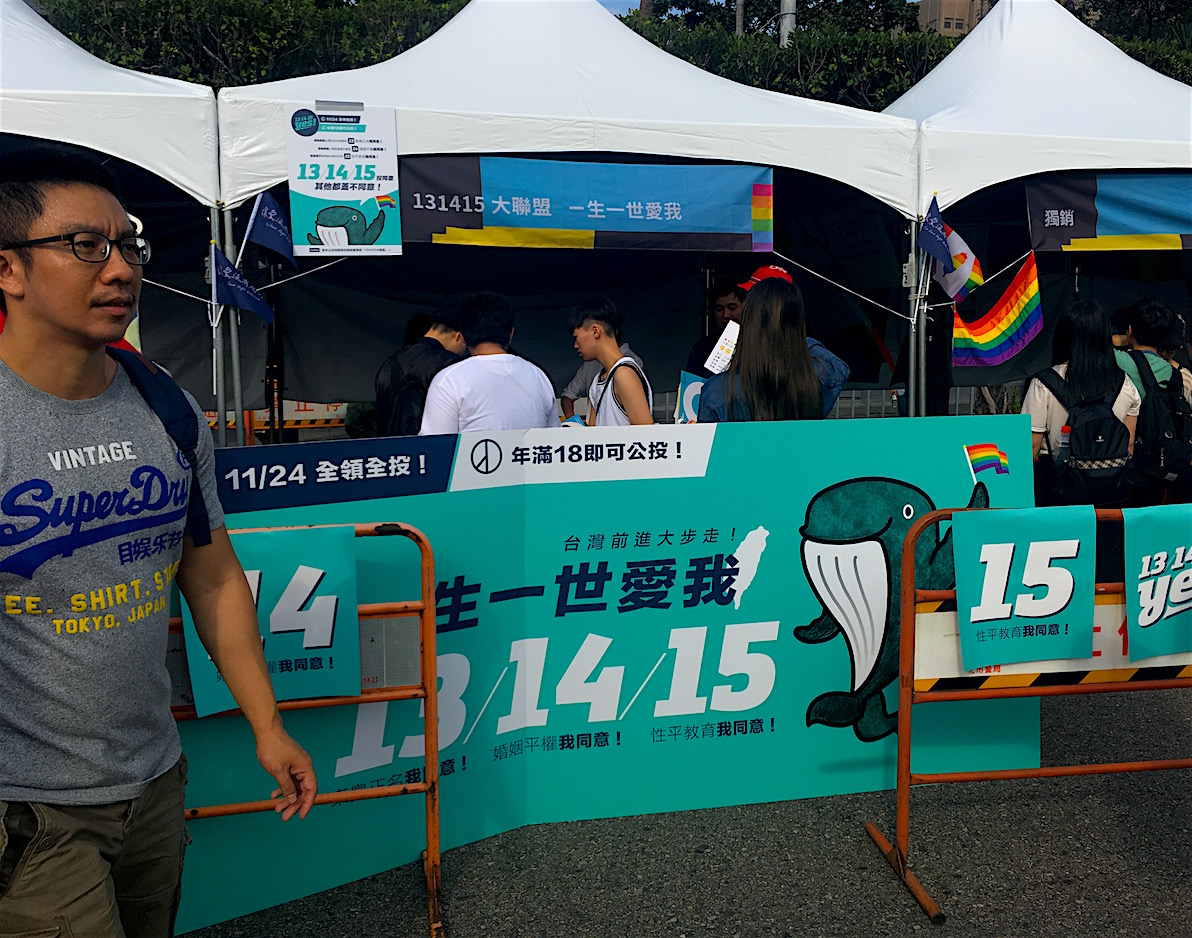 As the aims of referendum organizers were to build up to an eventual referendum on Taiwanese independence, the demands of a successful referendum being blocked would provoke outrage in Taiwan that might be useful in building towards that referendum. That was the aim of organizing the referendum.

However, if the referendum never passes because of fears that this will lead Taiwanese to be blocked from the 2020 Tokyo Olympics entirely, this could be a setback for independence advocacy. This would demonstrate that Taiwanese lack the will to face the possible political consequences of matters of Taiwan’s participation in just international sports games, much less pursuing the potentially hazardous path of political independence, which could lead to military reprisals from China.

2018 local elections are in some sense a midterm election for the Tsai administration. Moreover, Taiwanese history often attests to a pattern of widespread social protests before presidential elections. The results of the national referendums held during 2018 elections could be a contributing factor to the outbreak of a new wave of protests in the years before 2020, whether the results are positive or negative, and they give a sense of what the single-issue movements that take prominence would be. 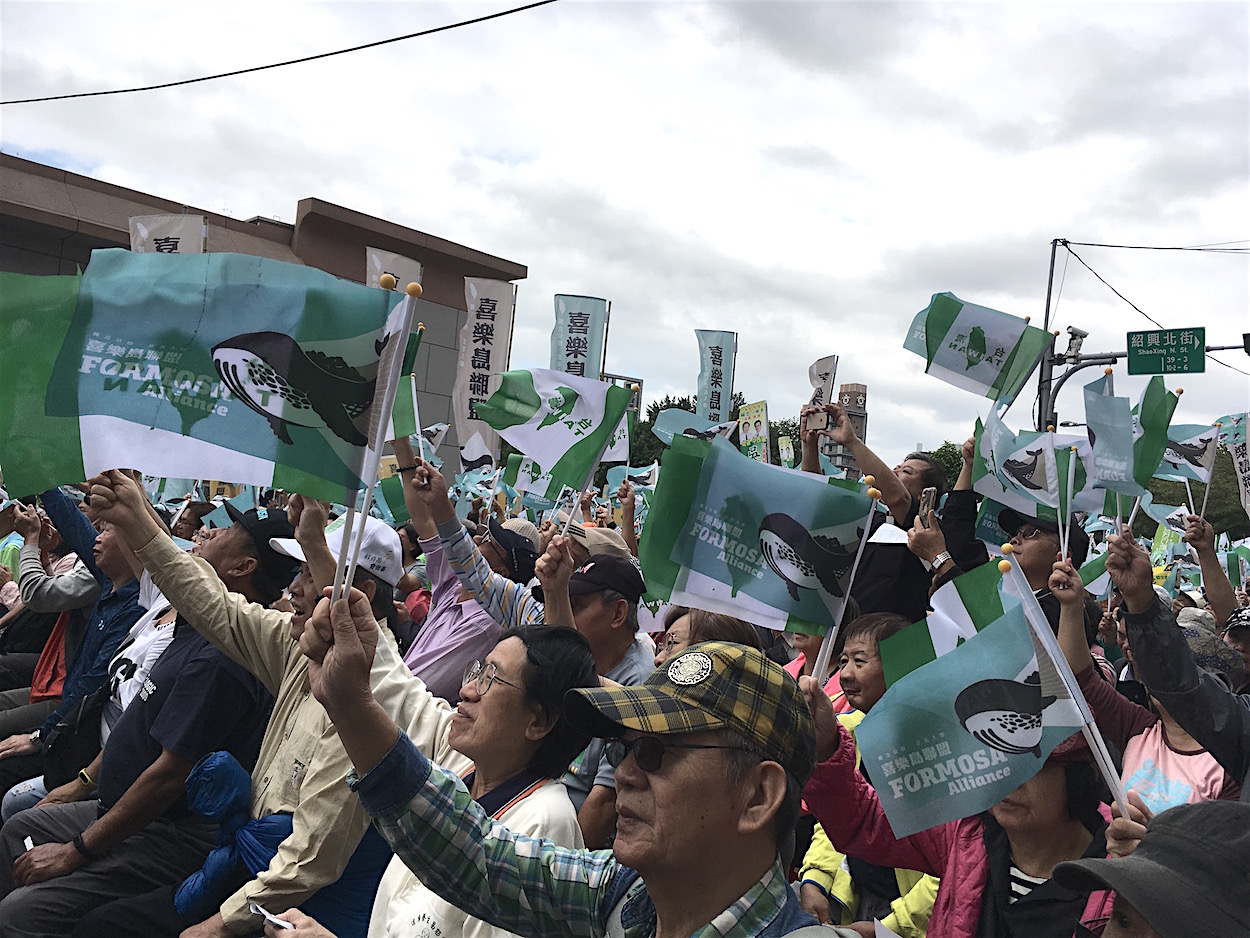 If there is chaos at the polls, it is possible that calls will take place to re-amend the Referendum Act to ensure that a similar situation does not arise again. Backlash may also follow against those who pushed for changes to the Referendum Act, to begin with, such as the NPP, which many see as solely responsible for these changes even if this was actually a bipartisan push. This remains to be seen.