Ma’s “Three Noes” Are A Clear Attempt To Influence Elections

RECENT COMMENTS by Ma Ying-Jeou outlining three “Noes” for Taiwan are a clear attempt to influence the course of 2018 local elections in favor of the KMT. Namely, the KMT has long depended on certain “formulas” regarding cross-strait relations to hold sway of the Taiwanese electorate, the most famous examples being the 1992 Consensus and “One Country, Two Interpretations”, and this would be an attempt by Ma to produce another such formula for the KMT before local elections take place. Such comments by Ma prompted a condemnation from no less than current president Tsai Ing-Wen, who usually does not take as harshly condemnatory a tone towards the KMT as she did in response to Ma’s comments.

Ma’s three Noes were “No ruling out the possibility of unification with China,” “No support for Taiwanese independence”, and “No use of force”. Ma made these comments at a forum to commemorate the three year anniversary of his meeting with Xi Jinping, the 2015 Ma-Xi summit in Singapore held near the end of Ma’s second term. This meeting was the first meeting between a leader of the ROC and PRC since the Chinese Civil War and the meeting was viewed as an attempt by Ma to solidify his legacy near the end of his term—as well as an effort to counteract the influence of the 2014 Sunflower Movement by overshadowing the largest social movement in recent Taiwanese history with this meeting.

Ma’s attempt may be to dictate policy beyond the end of his presidency, then. It is also possible that Ma hoped to create a “formula” out of the Ma-Xi summit post-facto, much in the manner that the “1992 Consensus” which the KMT asserted as a basis for cross-strait relations for so long was actually invented by Minister of the Mainland Affairs Council (MAC) Su Chi in 2000. Su Chi originally claimed that this agreement was made in during 1992 meetings with between Taiwan’s MAC and China’s Taiwan Affairs Office (TAO) but later admitting that he had coined this in order to more smoothly facilitate the peaceful transition of power to Chen Shui-Bian in 2000, seeing as Chen would be the first non-KMT president in Taiwanese history.

It was speculated at the time of the Ma-Xi meeting that Ma would attempt to assert a “2015 Consensus” after the Ma-Xi summit, since a meeting between the political leaders of the ROC and PRC would obviously supersede the status of a meeting between MAC and TAO representatives. Both the MAC and TAO are technically non-governmental organizations which the ROC and PRC governments conduct relations through in the absence of official diplomatic relations. It may be that, in some sense, this is what Ma is attempting now.

It is generally doubtful that Ma’s formula will prove similarly spellbinding of the Taiwanese public as the 1992 Consensus. For one, Ma’s attempts in 2015 to accomplish this were unsuccessful, when Ma still held power. Likewise, Ma’s actions remind voters of the KMT’s increasingly more extreme pro-unification stance. Ma himself previously denied aims unification in 2008. It is telling that now in 2018, he claims that there is “no ruling out the possibility of unification”.

Such comments by Ma even represents retrenchment by Ma since 2016, during which Ma got into a spat with then-KMT party chair Hung Hsiu-Chu, who was insistent on a formula she referred to as “One Country, One Interpretation” that she touted as something to replace the 1992 Consensus, with Ma insisting that it was still important to assert “One Country, Different Interpretations.” However, while Hung may have been ousted from power during a failed reelection bid for KMT chair, it could be that her actions were successful in ultimately dragging the party further towards the extreme end of pro-unification camp. 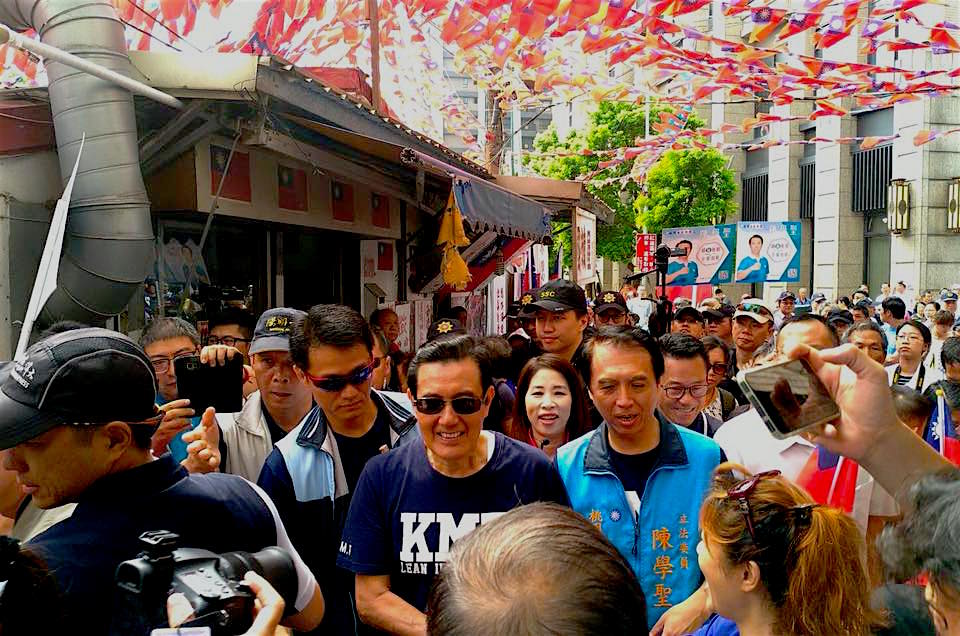 Given the unpopularity with which Ma left office in 2016, the fact that Ma Ying-Jeou has returned to public life to campaign for the KMT is a sign of desperation more than anything else—as well as how current KMT chair Wu Den-yih has proven to be such an uninspiring figure lacking in popularity that Ma still overshadows him so greatly there is a need for Ma to do such a thing. Indeed, there is even talk that Ma would try to seek a third term as Taiwanese president, something which would require constitutional interpretation, but, again, this would be only a sign of utter desperation.

It is indeed possible that the KMT will do better than expected in 2018 elections because the DPP’s retrenchment on its political promises or its slow progress on key issues to voters will lead voters to punish it by voting for the KMT. Or it may be that voters’ memories are too short and they forget the extreme pro-unification actions taken by the KMT when it was in power—indeed, the memories of voters are oftentimes quite short in elected democracies, whether in Taiwan or elsewhere.

But actions by Ma, in reminding the public of the KMT’s pro-China views, will not help the party. The KMT is best off hoping that the public has forgotten how starkly pro-unification it has become in past years, not reminding them of this. That Ma would even make such comments only goes to show how disconnected the party has become from public sentiment.