THE 16TH ANNUAL pride parade took place today in Taipei, drawing an claimed 140,000 participants, which would be a new record. This year’s pride parade would be a politically charged event, seeing as a referendum on gay marriage is set to take place next month during elections on November 24th, and this question loomed over the event. The parade is generally touted as Asia’s largest pride parade.

Among participating groups would be the Taiwan Tongzhi Hotline, Taiwan Tongzhi Family Advocacy, representatives of pride parades in other parts of Taiwan such as in Taichung, Yilan, and Kaohsiung, as well as corporate groups including Uber, Google, Hornet, and others. Third Force parties running in upcoming local elections, including the New Power Party (NPP), Social Democratic Party (SDP), and Radical Party, were also present. 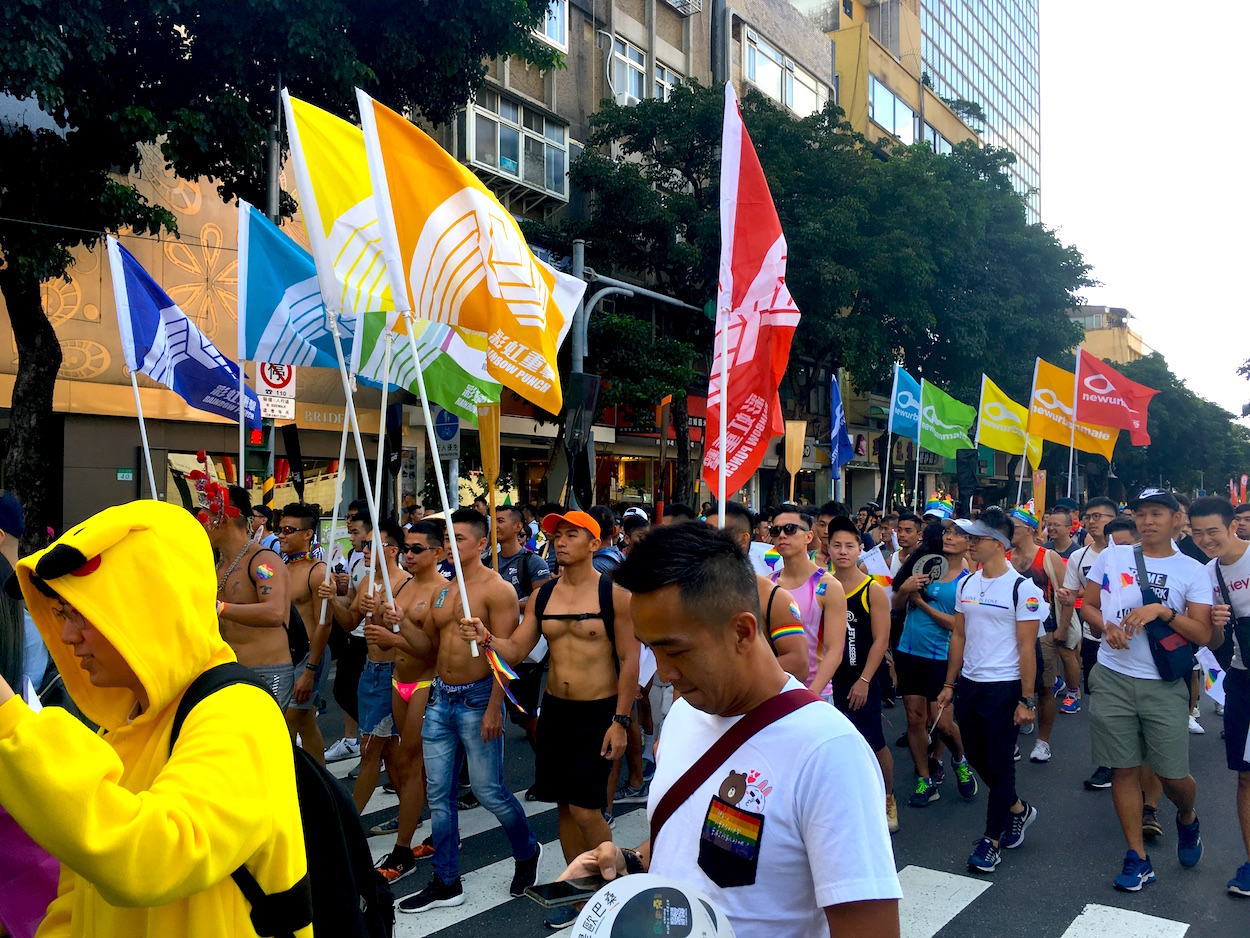 The parade this year divided between three routes, as is standard practice for the pride parade in Taipei as a congestion relief effort. Organizers hoped for a large turnout as a demonstration that Taiwanese society supports marriage equality and the march very likely met expectations. Through the course of the parade, volunteers distributed materials urging voters to return to their places of registration during elections to vote in favor of gay marriage and sexual education.

While the Council of Grand Justices ruled in May 2017 that the Legislative Yuan had two years to legalize gay marriage, no action has yet taken place to do so from the Tsai administration in the one and a half years since the ruling. Namely, while current Tsai Ing-wen ran in 2016 with the suggestion that it would seek to legalize gay marriage once in office, protests by Christian groups led elements of the DPP to break ranks and go against Tsai in opposing gay marriage.

Very probably, elements of the DPP had never been fully in support of gay marriage. The Presbyterian Church, which is divided on the issue of gay marriage, has historically had a strong presence within the DPP. 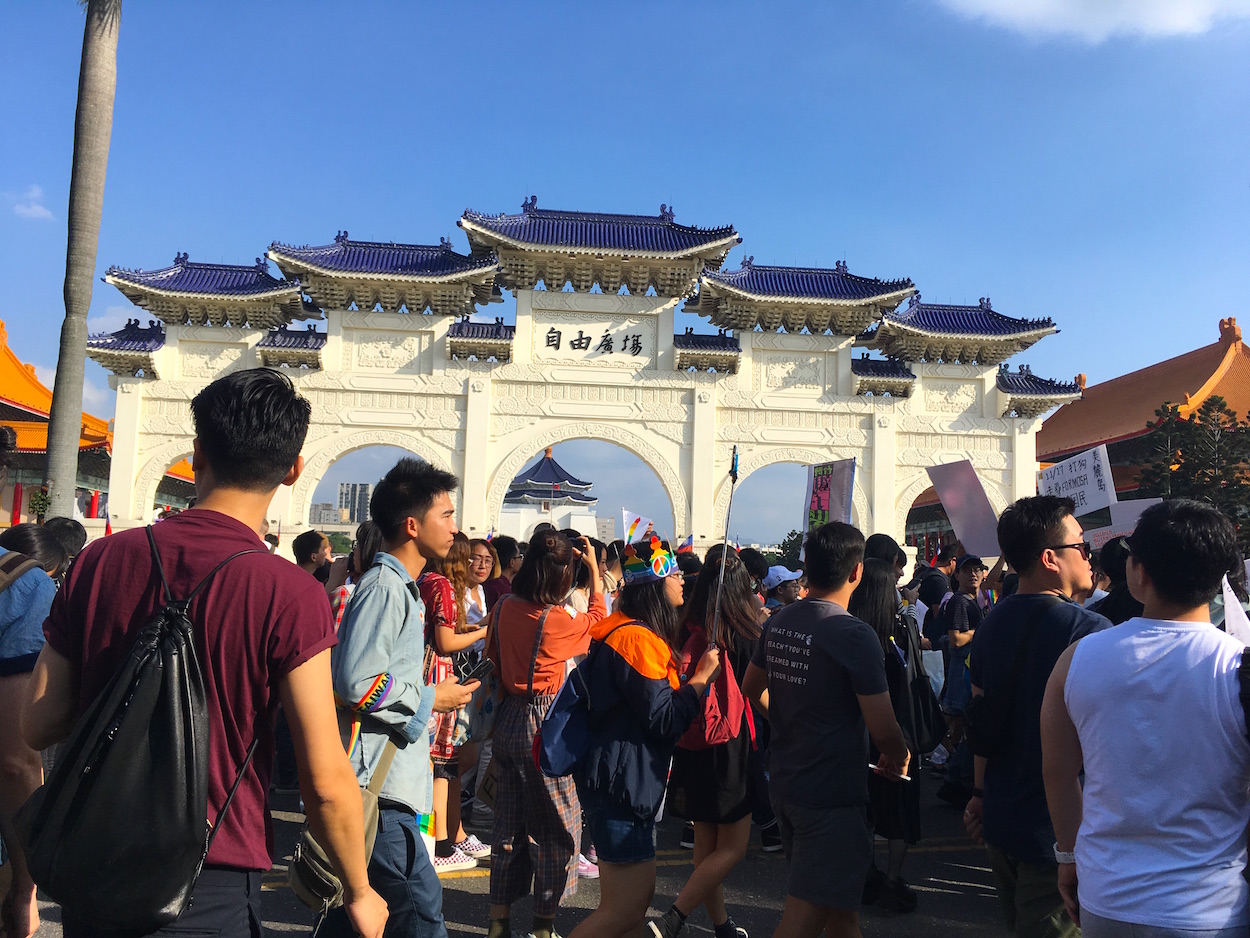 Before protests by Christian-led anti-gay groups, it was generally expected that marriage equality would smoothly pass into law in Taiwan and that Taiwan would become the first country to legalize gay marriage in Asia. Few expected organized resistance to marriage equality and it would be shocking for members of the LGBTQ and their allies that anti-gay groups would be successfully able to apply pressure to the DPP to reverse course. Subsequently, anti-gay groups would organize a recall vote against NPP legislator Huang Kuo-Chang for his support of gay marriage, though this would be unsuccessful, and a referendum campaign against marriage equality which obtained enough signatures to make it to the ballot.

This can be observed in that anti-gay groups were able to canvas many times more than the NPP in its recall vote against Huang Kuo-chang, even when they may have had less local presence than the NPP in Huang’s home constituency of Xizhi. Likewise, while pro-marriage equality activists eventually organized their own referendum on gay marriage, with a wording more favorable wording to marriage equality than the one pushed for anti-marriage equality activists, it took longer for them to reach the necessary benchmarks to hold a referendum than anti-gay groups did. 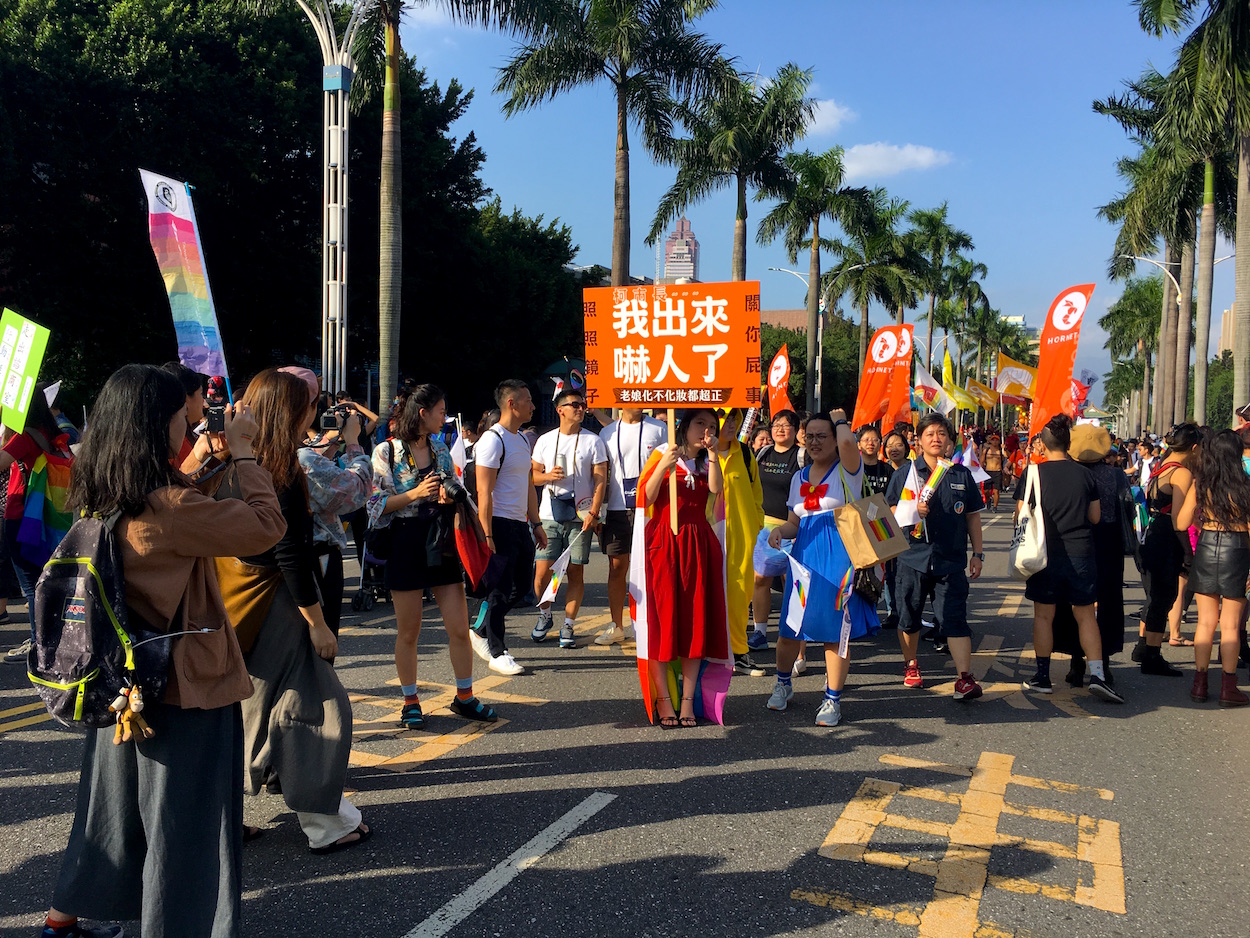 Indeed, many speeches today at the pride parade were responding to criticisms of marriage equality by anti-gay groups, such as speakers emphasizing the importance of sexual education and teaching pluralized and diverse social values through education, or that gay marriage is not incompatible with Asian social values in the way that anti-gay groups sometimes claimed. Church groups were also present to emphasize that they did not view Christianity as incompatible with gay marriage.

However, the results of the referendum next month are still up in the air. The Tsai administration has firmly demonstrated that it has no interest in picking up overt advocacy of marriage equality once again, ceding this political position over to Third Force parties.

Likewise, pro-marriage equality activists and anti-gay groups have both secured enough signatures for a referendum on the two gay marriage and sexual education, although anti-gay groups also included a question regarding the responsibility of the state towards providing for the welfare of members of the LGBTQ community. But the Central Election Commission has decided to allow conflicting questions on the same issues of marriage equality and sexual education onto the ballot, which could lead to confusion at the polls. For example, it may be that some individuals will not realize that to support gay marriage, they need to vote against the referendum question pushed for by anti-gay groups and to vote in support of the referendum question pushed for by marriage equality activists. They may, for example, simply vote positively for both questions, never mind that this is a contradictory result. 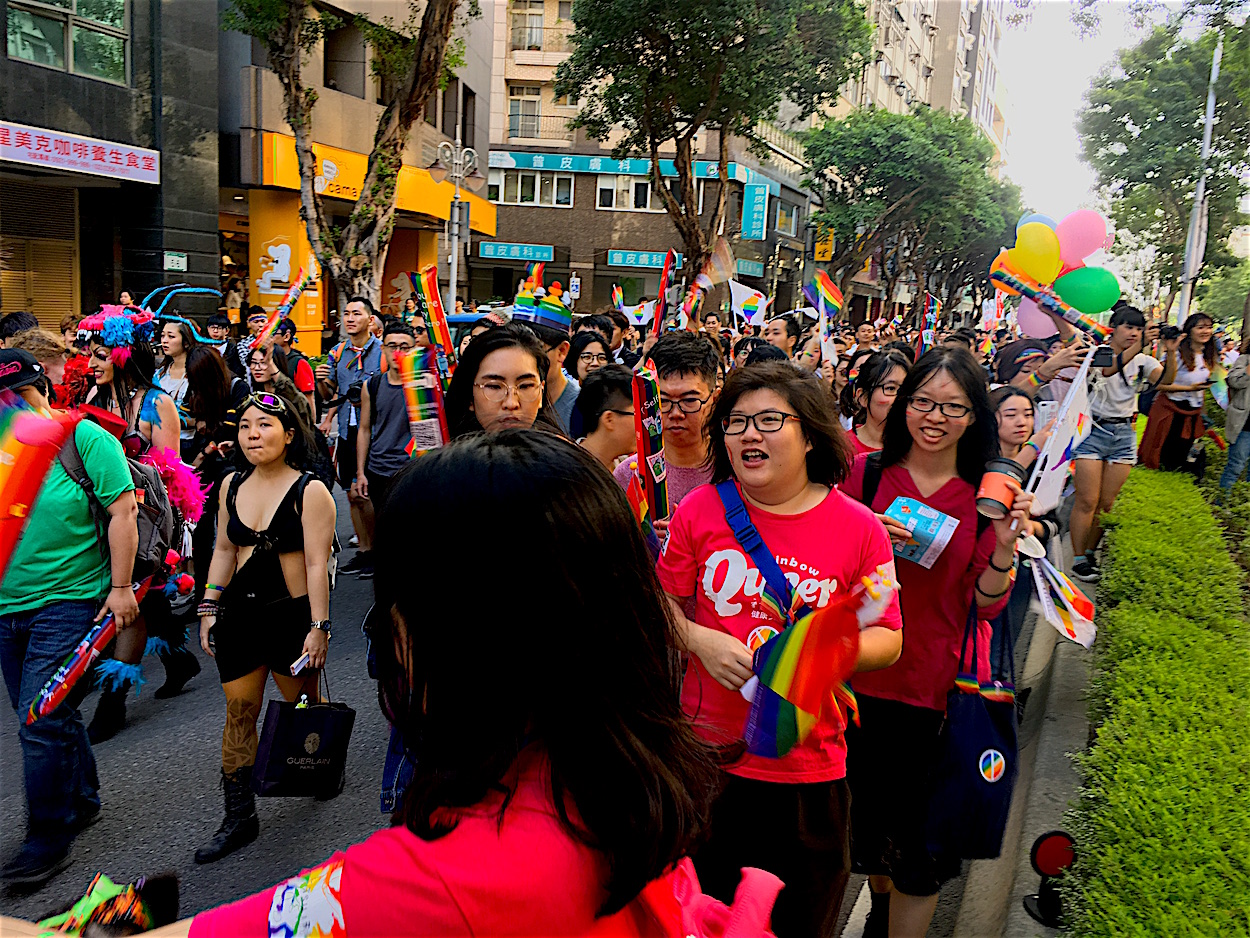 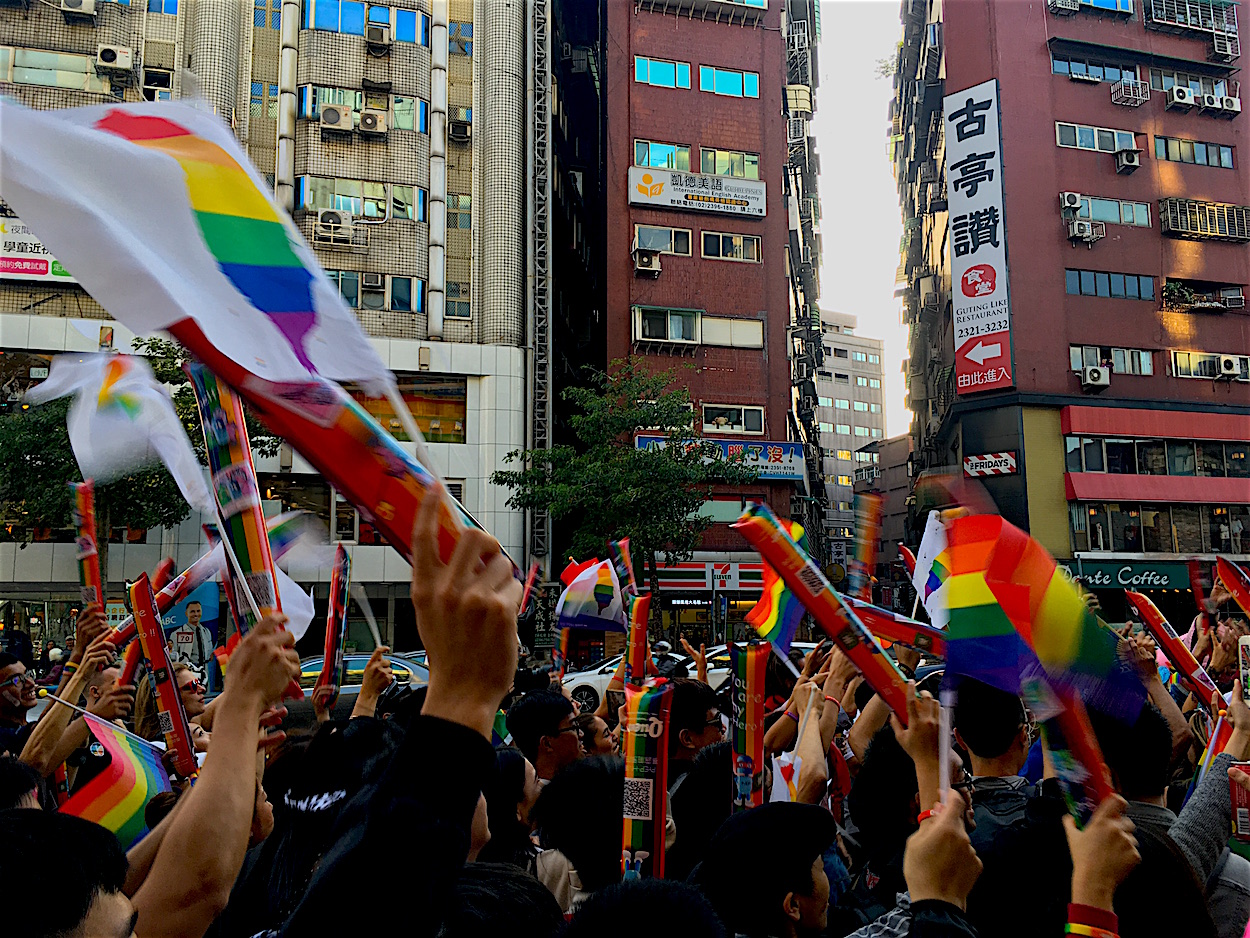 Even in the case of a referendum result that is in favor of gay marriage, it also remains to be seen through what means that “gay marriage” would be legalized, such as whether this will take place through amending the existing wording of the constitution or through adding an amendment to the Civil Code. The latter means is seen by marriage equality activists as equivalent to civil partnerships and not full marriage equality, with the possibility that members of the LGBTQ community will still be denied some rights. The DPP, which hopes that Taiwan will be perceived as the first country to legalize gay marriage in Asia yet has demonstrated an unwillingness to actually take action on the issue, may still try to pass off such civil partnerships as being full marriage equality.

In this way, while 140,000 took to the streets of Taipei today to demonstrate their pride in their identities and commitment to support for LGBTQ equality. However, many barriers still remain for this to be realized in Taiwan.