IT MAY BE ironic to note that the Epoch Times, the multilingual newspaper run in over 30 countries by the Falun Gong, has been put on edge by the rise of the Democratic Socialists of America (DSA). However, perhaps an instructive parable lies in there, somewhere. 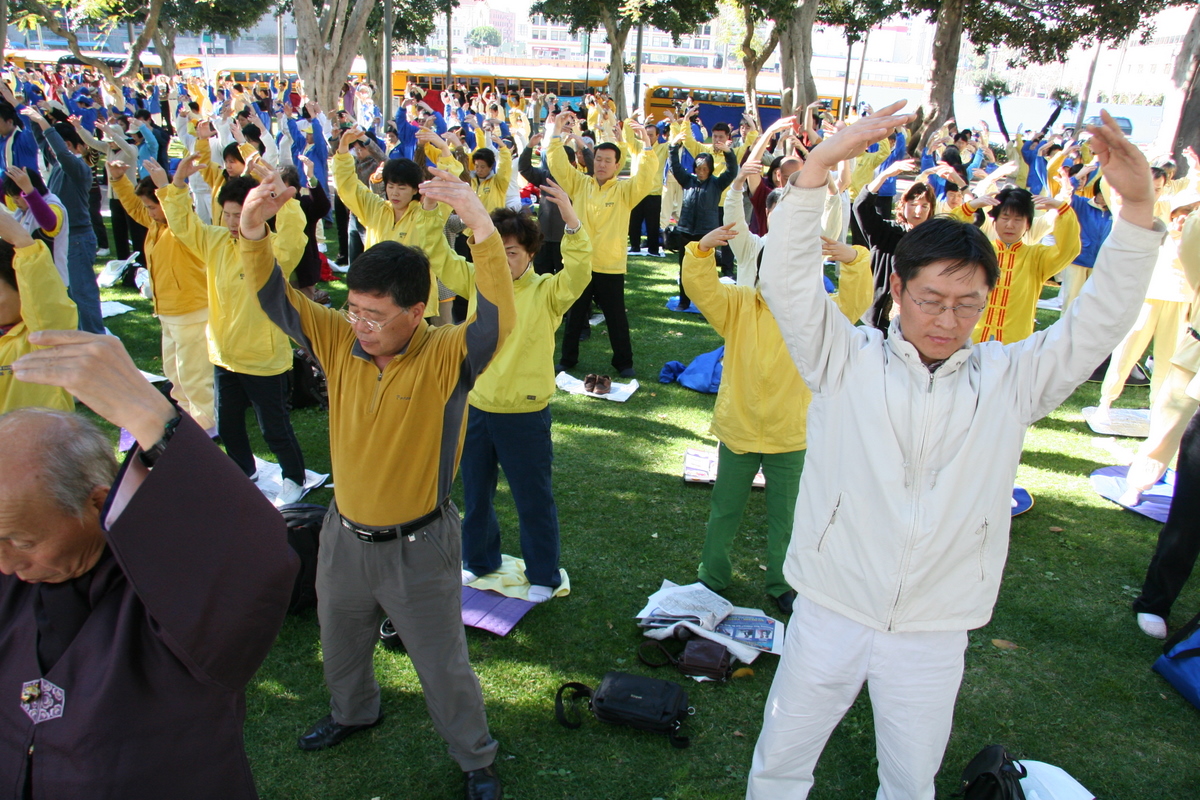 Originally founded in 1982, the DSA has been for decades one of America’s largest socialist organizations, though many on the left did not view the DSA as particularly radical. But the DSA has seen a new wave of momentum with the influx of tens of thousands of new members after the Sanders campaign put socialism into the mainstream of American, including attempts to push the DSA further leftwards, and various attempts by left sectarian groups to co-opt the group from within.

On the other hand, the Epoch Times would be run by the Falun Gong, the Chinese religious organization persecuted by the CCP for decades. The Falun Gong emerged in the 1990s following a boom in spiritual practices in China after economic liberalization under the Deng period, however, the group eventually came to be seen as a threat by the CCP. It is alleged credibly that the CCP engages in live organ harvesting from members of the Falun Gong and the sale of these organs internationally.

Unfortunately, while one can be sympathetic to the political and religious persecution faced by the Falun Gong, Falun Gong members frequently demonstrate that they are a religious cult. As a cult whose members donate their wealth to the organization, they possess the vast resources which have allowed them to fund a large media outlet such as the Epoch Times and operate globally—basically, any location in the world with a significant amount of ethnic Han has a branch of the Falun Gong present. Moreover, the Falun Gong has taken to aligning with any and all forces on the political right to oppose China and lashing out against any and all politically left groups as potential threats in line with the CCP.

Considering that the DSA has implicitly stated its position to be “democratic socialist”, as distinguished to what it sees as communist states such as the Soviet Union or China, the Epoch Times’ characterization of the DSA proves somewhat hilarious in claiming that the “Democratic Socialists of America is a communist organization”, and attempting to draw connections between “actually existent communism” and the DSA. Hence claims that “the Chinese regime recruits American communists” or claiming that “former East German Communists [are] training [the] Democratic Socialists of America.” 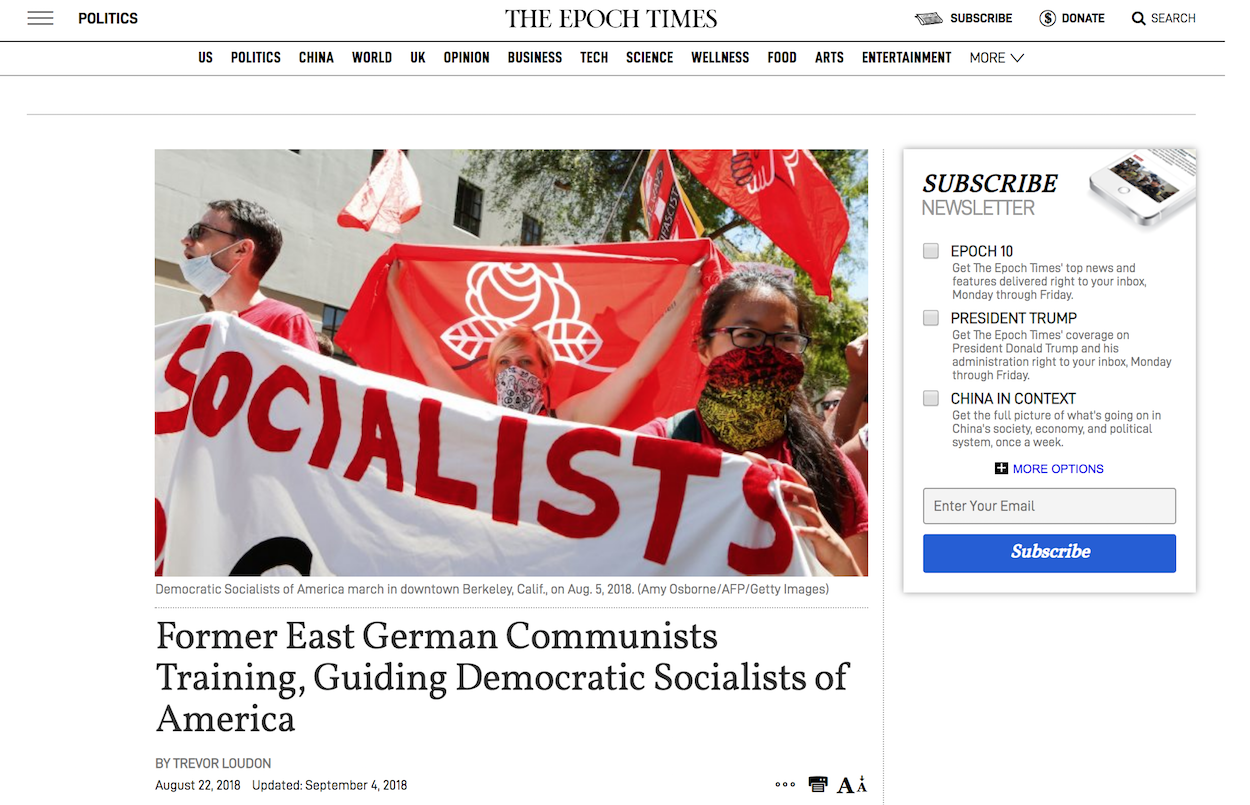 One such article from the Epoch Times

DSA or DSA-affiliated politicians such as Cynthia Nixon or Alexandria Ocasio-Cortez are frequent targets of ire, with an editorial claiming rather notably about Ocasio-Cortez that “If she is smart, she can use some of that free time to take lessons from Democratic Rep. Judy Chu from California, who built up a net worth of more than $3 million day-trading the S&P 500 with call and put options since her first election in 2009.” The same editorial goes on to claim that “Socialism appeals to the dark side of human nature, robs it of agency and responsibility, and always leads to hunger, misery, and death”.

Other Epoch Times articles go on to make claims about DSA saboteurs from within the government, running with American president Donald Trump’s paranoia about sabotage from the “deep state”, paired with what is more or less revived Cold War McCarthyism or other conspiracy theories, such as claiming that mega-wealthy Marxist-Leninists are funding the DSA. In this, the Epoch Times even goes so far as to try and tar Chinese labor activists who have taken great personal risks against the CCP, what should be shared enemy, by painting them as communist infiltrators. But, more generally, Epoch Times has seen fit to trumpet all sorts of right-wing conspiracy theories about the political left in past years about the American antifa, Occupy Wall Street, and so forth.

With regards to the views of the Falun Gong, one is generally reminded of Marx’s words about religion being the opiate of the masses. Nevertheless, the political drift of the Falun Gong towards the political force has become one shared by many forces opposed the authoritarianism of the CCP. Namely, because the CCP claims to be “left” and the American right also seems to oppose China—though this occurs out of American geopolitical interest more than anything else—this leads such forces towards increasingly politically right views. Apart from Chinese Falun Gong members, this includes some Chinese political dissidents who find themselves living in exile in the United States—Chinese democracy activists such as Chen Guangcheng, Yu Jie, and Chai Ling, among others—and this has also been the fate of some in Hong Kong and Taiwan.

Particularly in Taiwan, with the rise of the youth-oriented left political parties after the Sunflower Movement collectively referred to as the “Third Force”, some have seen the development of the DSA as something of a parallel development, as with interest in international developments such as the rise of Syriza in Greece or Podemos in Spain in years preceding. As with the DSA, Syriza, Podemos, and etc., it remains a question as to whether Third Force parties may become increasingly conservative if they take power. 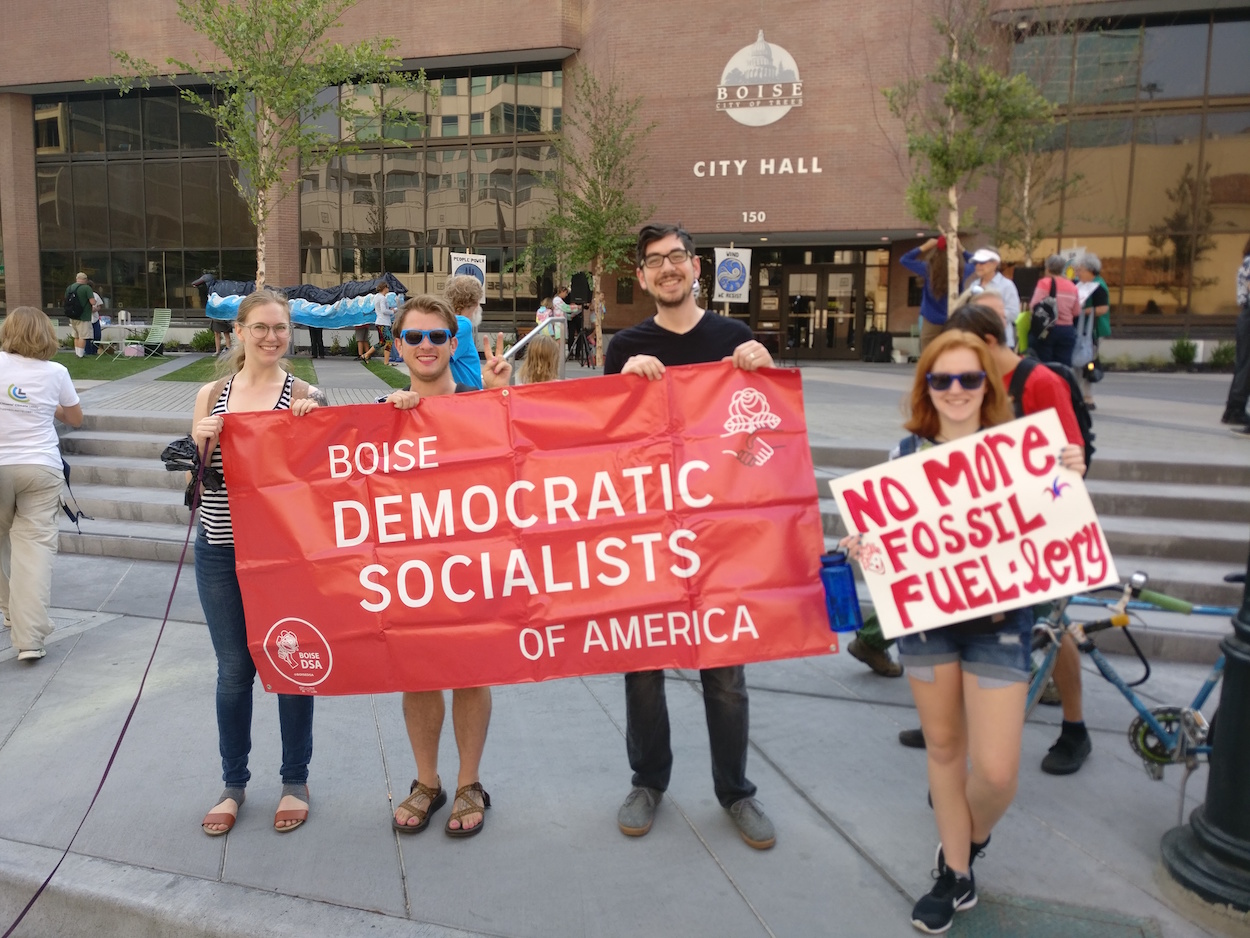 That America has historically been the military guarantor of Taiwan’s de facto independence from China has also led many pro-independence political actors to historically seek stronger relations with the American political right, with the perception that the American right’s anti-communist bias predisposes them to support Taiwan. This continues in the present with the Trump administration.

Perhaps then, the Falun Gong provides a negative lesson for Third Force parties if they are pulled to the right because of their opposition to China and hopes for an alliance with America inclusive of the American right. After all, while Third Force parties may currently assert support for socially progressive political platforms such as labor rights, LGBTQ rights, economic democracy, and etc., alignment with right-wing forces internationally will almost certainly lead to these values being compromised in some way. We shall see if this is the case.