On August 11th, New Bloom editor Brian Hioe interviewed theatre/performance maker and music composer Jaha Koo, during his visit to Taipei to perform in the Taipei Arts Festival. The following is a transcript of their conversation, which has been edited for clarity.

Brian Hioe:  For those who may not know you, could you first introduce yourself? 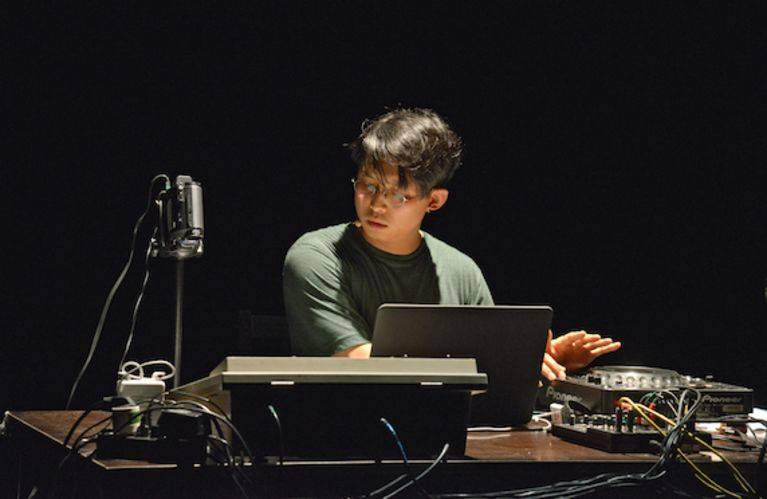 BH:  Something that is interesting for me, from what I’ve seen of your work, is that a lot of it deals with not only the nation-state but also flows of global capital. How do see that as linked? For example, you have Eaters, about the world leaders. You also have Lolling and Rolling, which is about South Korea wanting to mimic the West. You also have references to the WTO in multiple works. What got you interested in this subject matter?

JK:  My current project is called the ‘Hamartia Trilogy’. It’s about focusing on the inescapable past which tragically affects our lives today. Basically, I’m searching for tragic roots of contemporary issues nationally and internationally.

In Lolling and Rolling, I revealed the imperial ambition of contemporary South Korea. South Korea wants to become like the United States or Japan, to have a higher position than the other Asian countries. They are really critical about Japanese history, but they are doing something similar to what the Japanese empire did in the past.

The subject of Lolling and Rolling is English and tongue surgery to develop better pronunciation. But this kind of madness is about the aspiration towards such national ambitions.

BH:  It almost seems like internalized colonialism. Once you’re colonized, then you eventually want to become a colonizer. I feel like you see that with Japan in the past and also China. It’s possibly also true of Taiwan.

How do you see the relation of America in all this? Or the West more generally? I think Eaters really deals with that. You have these images of world leaders eating things. Imperialism is about extracting resources for consumption, of course.

JK:  With Eaters, in the video work, only male dictators or emperors or world leaders or presidents are present. I made the video during the production of Cuckoo because Cuckoo is about our survival with rice, that is, what is the meaning of the rice and how to survive, a metaphoric way of raising questions about what we eat, what we wear, where we live, and other choices.

Yet we are eaten by someone culturally, economically, and politically, particularly by male, macho leader figures. Many such individuals plague our society. 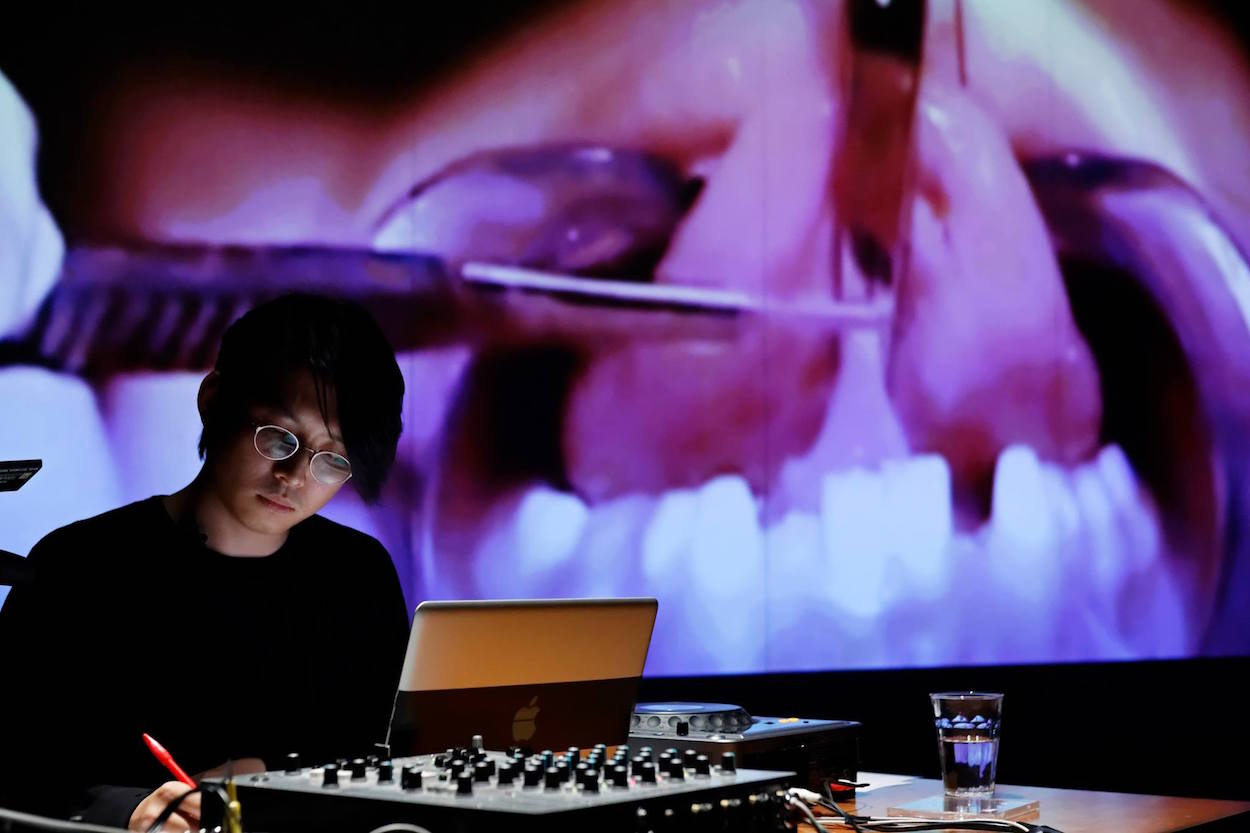 BH:  There’s a comic aspect to that, yeah. In Cuckoo, you touch on the South Korean condition of feeling alienated. I think what’s interesting about Cuckoo is you literally have a commodity that speaks. The rice cooker itself speaks. I also think that’s alienation in some ways, but because in capitalist society, we’re all commodities. Our labor is bought and sold. That kind of thing.

Is that part of what you hand in mind? It’s interesting that this animate thing is given life in that way.

JK:  Yes. When I started to make this work, I was originally thinking about the social pressure we face in the capitalistic world. The pressure we are subject to under society.

At the same time, as an artist, or as a performer, I was thinking about post-humanism. for example. I was very interested in theater without human beings.

That’s one of the reasons why I decided to make a performance with Cuckoo rice cookers.

In the beginning, I wanted to make the rice cookers as AI. But some problems emerged in the process of production, which led to how it ended up. I hired a hacker, he is a very notorious hacker internationally in a good way. He works in Germany, mainly with big corporations as his clients.

Actually, home appliance machines are among the most difficult things to hack. For example, Cuckoo has high pressure and high temperature. It will break hacking materials, such as that they melt down. But finally he managed it, so he made an AI machine.

The problem was that the AI couldn’t understand my English. So if I said, “Hey, go straight,” then it would react in the wrong way. Because my English pronunciation is not native and we were using pronunciation from the Android system.

So then I had to decide if I should take on the challenge of an AI performance? If I perform with that kind of AI, we would lose too many things about the core topic. So I asked him to make a telerobotic object. Now I’m working and I’m performing with a robot on the stage. 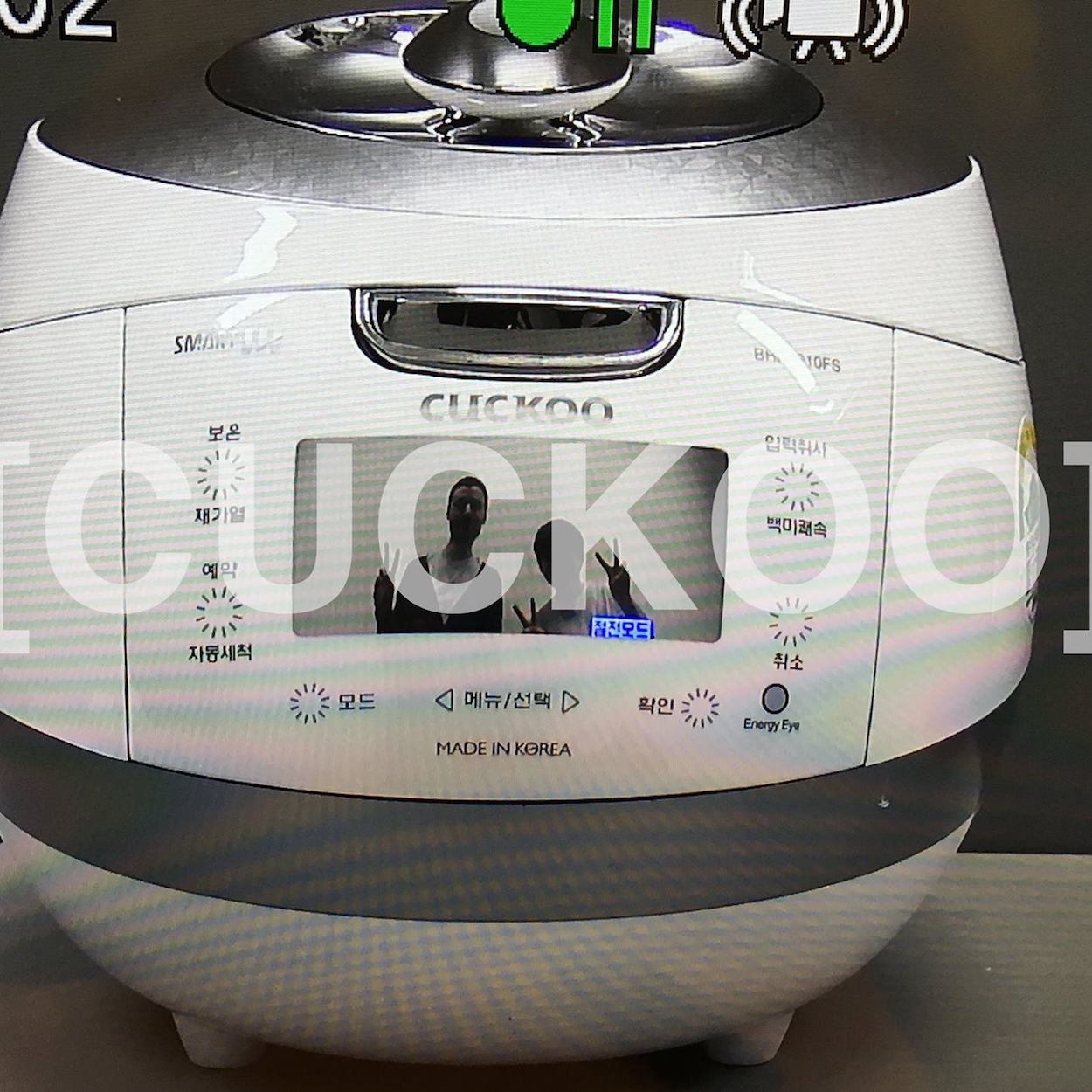 BH:  I see. I think the rice cooker is very interesting because it’s a technology that’s been around for a long time. In the past, you just had the steam cookers, but now they’re adding all this electronic stuff. Like it will talk to you and there’s a voice. It’s very interesting that that’s been the tendency. Our phones also have voices now. In the past, they didn’t.

JK:  The right of overseas travel did not really exist before 1989 in Korea. Before 1989, people couldn’t go out easily. So if people went to Japan, people would ask them to buy Zojirushi rice cookers from Japan and bring it back. So this kind of complex, let’s say, encouraged Koreans to develop better scientific products, smarter and better rice cooking.  And cuckoo is the outcome of their ambition.

BH:  Yeah. Back to that, you mentioned social pressure from all these social structures, like testing, or being part of a business and working, and things like that. Which is very capitalist, with this focus on production and being productive. Very neoliberal actually. Could you talk a bit more about that?

JK:  This gap between opportunities in a competitive society created an environment repressive for the younger generation, including me, as well as those younger. This made a tragic situation where many people committed suicide in South Korea.

This kind of thing happened in Japan in the past, like when their bubble economy burst. Afterward, a wave of people started to commit suicide. And it was kind of a domino effect that, like, maybe it kind of infected other people. The wave of suicides in South Korea also happened following Japan.

It affected all age groups. The biggest reason why teenagers were committing suicide was that of the educational pressure from the school and from their parents.

JK:  Then in their 20s, they are frustrated by looking for a job. It’s too competitive and the pressure leads them to commit suicide. In their 30s, they have financial problems. Perhaps they couldn’t have a job during their 20s, even though they found a job in their 30s, the income is too low and they are forced to work and work and work. This kind of stress—pressure from the company and financial problems is the biggest reason for suicide in one’s 30s.

In their 40s, they face family pressure—they have to take care of the older and the younger generation of their families, and that’s why they kill themselves. In their 50s and 60s, even if they survive, then they have cancer or become ill with stress problems. And they don’t have money, so then they commit suicide. It’s an intergenerational issue. 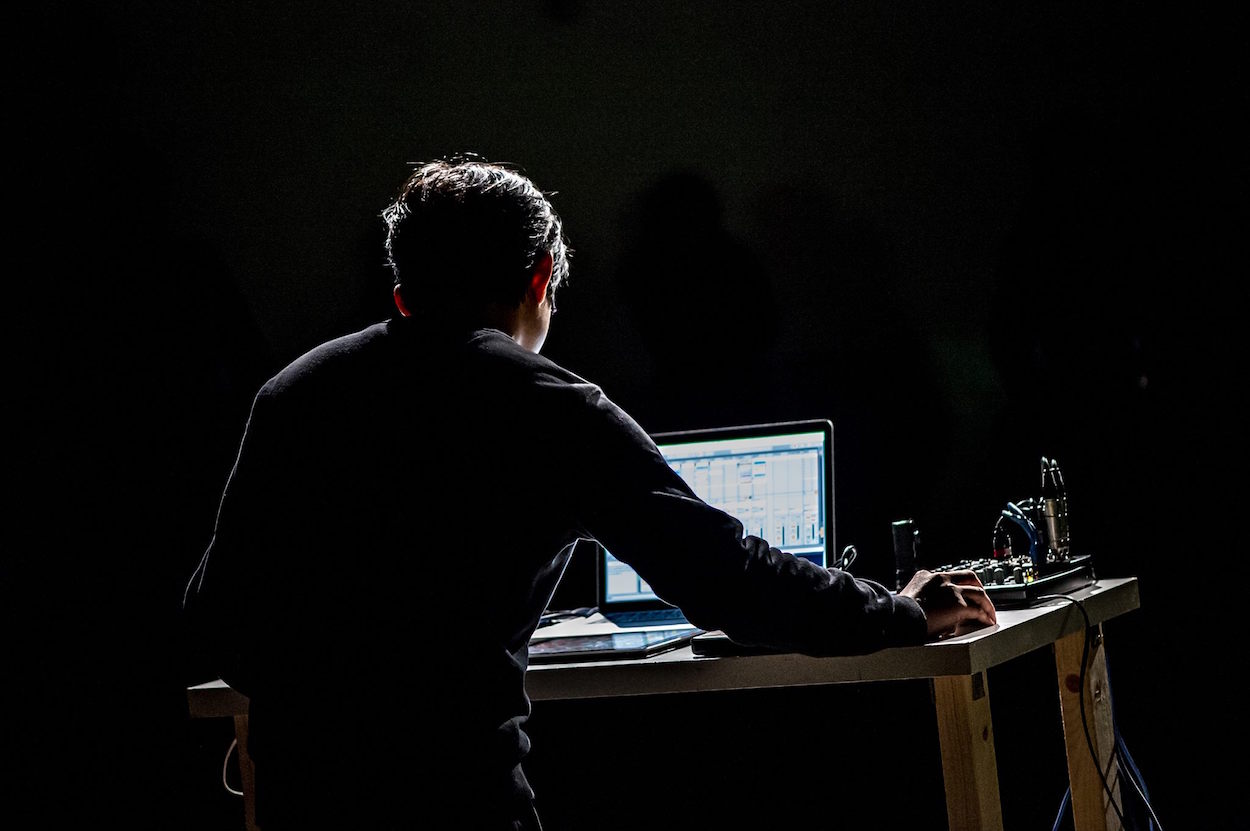 JK:  Yes. Living in pressure cookers, like these waves of suicides, as a result of pressure. Cuckoo is about this.

BH:  It’s interesting that in Japan, or South Korea, or Taiwan, you have these huge companies that control so much of the economy. But the thing is in the past they could employ people for their entire lifetime, though Taiwan also had less of this kind of system. Although that was also terrible, with neoliberalism, this kind of structure is breaking down. You have more and more precarious labor.

JK:  Actually, before coming to Taiwan, I was wondering, because Taiwan was one of the countries not impacted during the East Asian Economic Crisis.

BH:  Though it was one of the Four East Asian Tigers.

JK:  Because the economic structure is slightly different compared to Japan and Korea.

BH:  We don’t have the chaebol or keiretsu.

JK:  But also the rate of unemployment is not so high.

BH:  Yeah, if I’m not sure why exactly, I think Taiwan is very service sector oriented, creating an easy need for employment, perhaps. Likewise, Taiwan did not have a lot of foreign debt.

JK:  I am very much wondering how the Taiwanese audience will react to my work. For example, when I showed the work in Athens, the reaction was too heavy for me. When I performed it last month in June, the same day, the IMF agreement was finished, and the IMF situation was widely reported on in Greece. They were very skeptical about the future, feeling something will happen like happened in Korea, with economic depression and strong social pressures for the younger generation, more homeless people, and breakdown of the welfare system.

After that, I felt very painful. Here I’m wondering how Taiwanese, especially the young audience, will reflect on the performance in connection in their society.

BH:  What kind of connections do you think you can draw between your own work and that of other participating artists in the Taipei Arts Festival? There’s a focus on Asia this year in the arts festival. We have Eisa from the Philippines and people from Macau and Japan and Singapore and other countries.

JK:  Reflecting our societies based on diverse topics. We really need this kind of platform to communicate with each other in Asian countries.

Korea is politically an island country, you know, even though it is geographically a peninsula. It’s really an island, so it’s a very isolated society. It’s very nationalistic. Like Japan. So it’s quite difficult to find international means of communication in Korea, even though many people of the younger generation want to go abroad for professional work or have a professional network.

With this festival, I have found that with the Think Bar, it is really good to be here. Because even if we have diverse topics and we are talking about different subjects, we can brainstorm to think about the future and to learn about our societies in neighboring countries in Asia.

BH:  Lastly, I was also curious about your music. How do you think of your music, personally? You seem to mostly have a theater background?

JH:  Actually, my musical background is longer than my theater background. I registered for the theater club in high school. I was really into it because there are many mediums, such as stage work, text, music, and visual arts. And I wanted to become an independent theater maker, who makes everything himself.

Currently, my main medium is music and video work, based on documentary stories. I’m really happy to make music. It’s less stressful than theater. Because theater work is more of an intellectual process. Of course, music can also be intellectual, conceptually, but somehow I enjoy making something specific, with unique sounds and unique rhythm. And not only as support for a theater work but as a main language of the theater.

BH:  Thank you for your time.