Is The Jasic Struggle Primarily Symbolic Or Does It Have The Potential To Spread?

THE SHENZHEN JASIC struggle continues, with the arrest of over 50 student activists in late August. The Jasic struggle has become widely reported on internationally in past weeks due to an ongoing labor struggle by workers at Jasic to form a union, a right that they should have according to Chinese law. Jasic is a private company based out of Shenzhen involved in the production of welding equipment. As of September 4th, reportedly 15 students and workers still remained detained, and lawyers were warned against attempting to represent activists or workers by Chinese authorities.

While demonstrations such as those that have taken place at Jasic facilities in Shenzhen are not unusual in China, as means by which workers facing harsh conditions attempt to express discontents or to negotiate for better conditions, what has garnered international attention has been the involvement of Maoist student activists in the struggle. The most famous of these would be Shen Mengyu, a graduate student turned organizer.

The involvement of Maoist students, some of which studied at elite universities, is what primarily differentiates the Jasic protest from other similar protests in China. The symbolic resonances of the protest have not been lost on either those elements of the Chinese public aware of the protests or international media, seeing as Xi Jinping has sharply increased Maoist rhetoric in line with the consolidation of state power. But that Xi is being demonstrated against by Chinese young people for the means by which his rhetoric fails to live up to the reality in terms the self-evident exploitation of Chinese workers. Particularly enraging may be that, while Maoism would suggest that workers have the right to self-organize, the official state-run labor unions prove a key means by which authorities act in collusion with factory owners and management to crack down on organized worker discontents.

Key figures of the Jasic struggle have seen periods of detention in past months, including Shen Mengyu. With the arrest of 50 student activists from a guesthouse they were staying at, it remains to be seen whether this will break what has been termed a student-worker alliance, or whether the movement will bounce back. The offices of leftist publications such as Red Reference and Epoch Pioneer were also raided by police late last month, with staff members detained.

However, one also deeply questions whether much news reporting on the struggle has been exaggerated. Again, the Jasic struggle is not unique among contemporary Chinese labor discontents apart from the involvement of Maoist students. A large part of the significance of the struggle is because of Maoist students protesting against the actions of the Xi government prove highly symbolic, which is why this struggle, among other current labor struggles in China, has gained wide circulation. Maoist students may actually share some of the revisionist historical views of the Xi administration, including evaluations of the Cultural Revolution and Great Leap Forward dismissive of the mass deaths that occurred under both as bourgeois propaganda, but what is important to note is that their views would ideologically contest the moral legitimacy of the Xi administration. 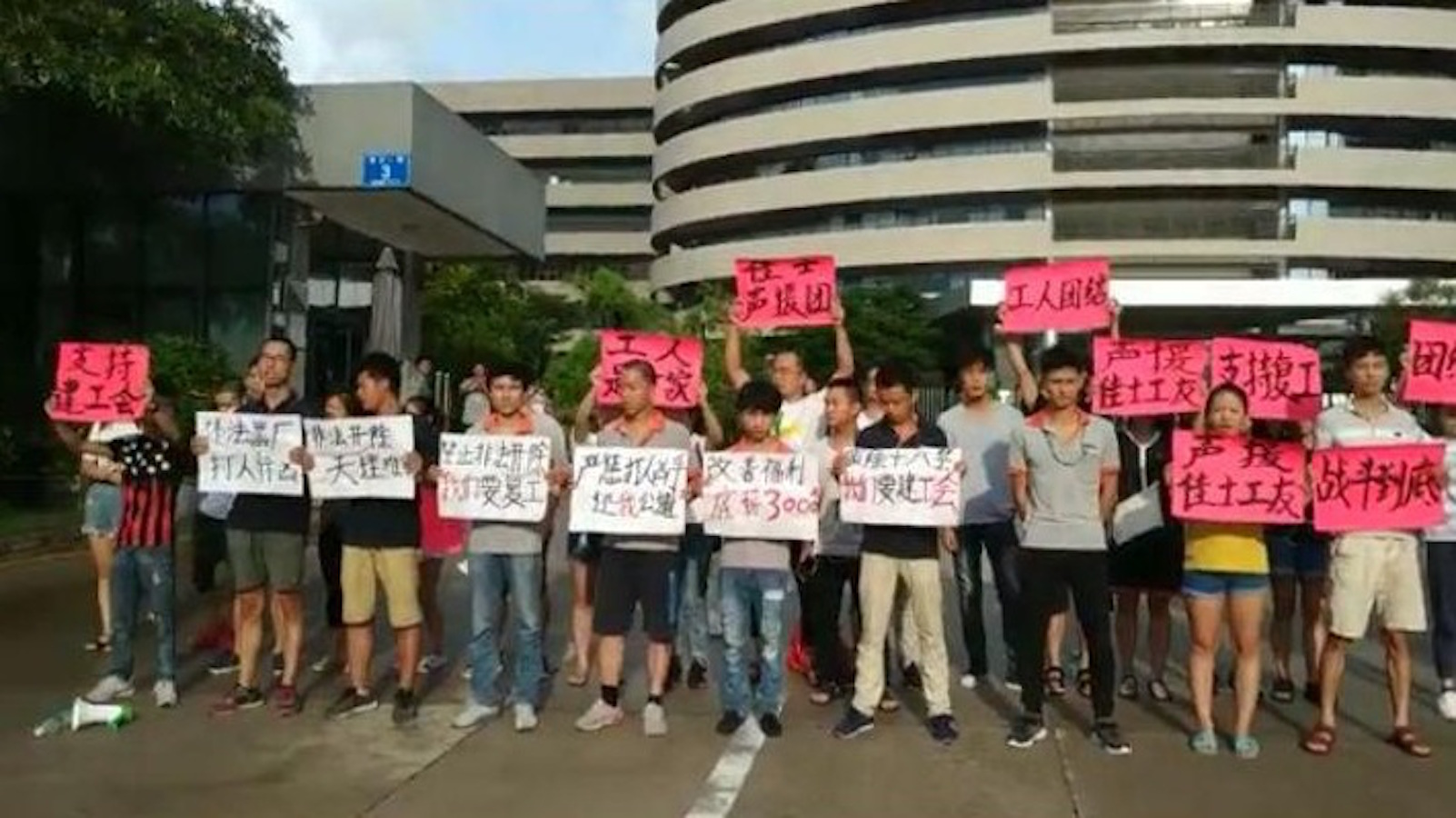 As such, while Chinese authorities often overreact to rather small movements, sometimes inadvertently contributing to their intensification, news reports claiming Beijing is running scared of these student activists seem highly exaggerated. Indeed, some reports make it seem as almost as though current protests could prove a second Tiananmen Square, which is highly unlikely.

It will only be if the Jasic struggles inspire other student-worker uprisings in other parts of China as part of a larger movement that these will prove anything more significant than what is fundamentally a local struggle, and one whose significance is primarily symbolic. Otherwise, the Jasic struggle will simply be a struggle confined to one company in one part of China.

The Chinese government seems well aware of the symbolic import of the Jasic struggle. One notes that the Chinese government has adopted the strategy of attempting to claim that the Jasic struggles are the product of outside interference, as a way of claiming that these struggles are not a product of China’s internal contradictions, but are instigated from the outside.

It is probably true that the southern Chinese province of Guangdong’s proximity to the more open Hong Kong is generally a contributing factor to the high amount of labor unrest in Guangdong in past years. Nevertheless, state media has attempted to frame the protests as occurring solely because of outside interference, such as by way of Hong Kong-based political actors or “foreign interference.” This, then, diminishes the role of homegrown Chinese student activists in the movement, reducing the symbolic import of the movement and depicting it as simply being an attempt to undermine the Chinese state. Examples include attempting to claim that Chinese student activist Yue Xin is a supporter of Taiwanese independence due to a photo she took with current Taiwanese president Tsai Ing-Wen in 2015. 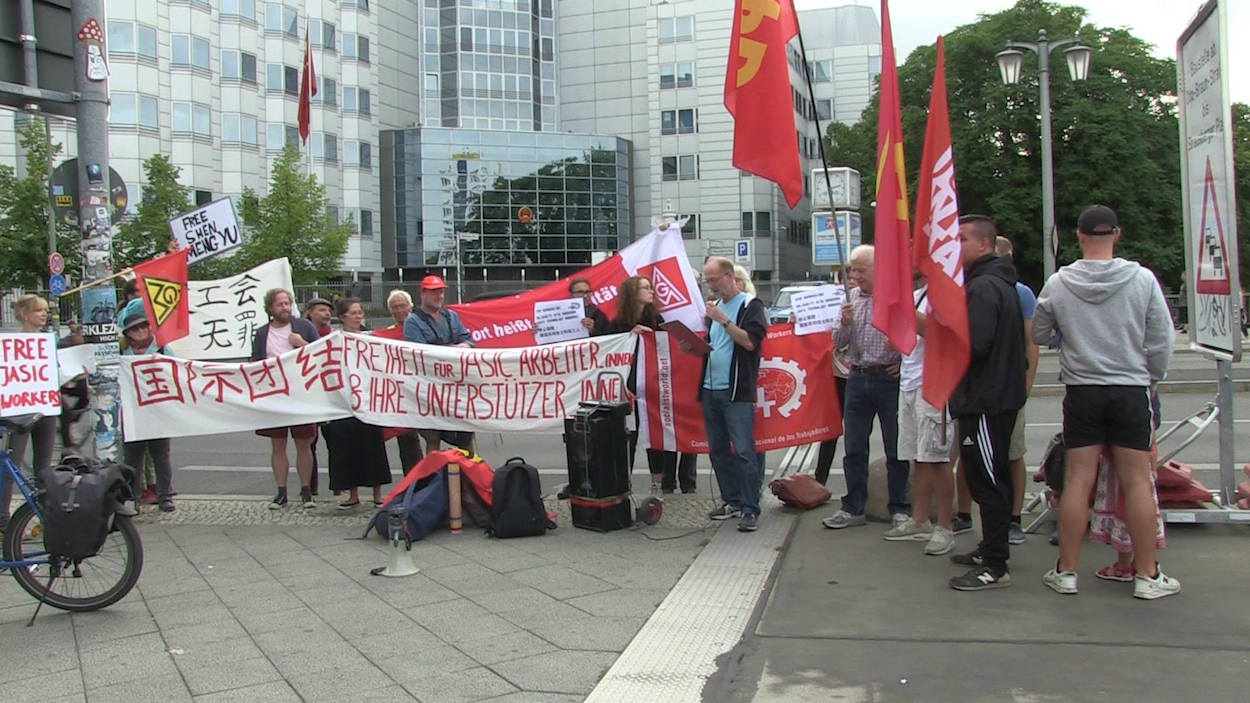 Solidarity rally in front of the Chinese embassy in Germany. Photo credit: Labournet.tv/Facebook

Given the crucial involvement of student activists, the Jasic struggle has inspired shows of solidarity from students from universities such as Nanjing University, Sun Yat-sen University, Peking University, and Tsinghua University. Likewise, one observes that coordinated multi-provincial strikes have been on the rise in China over the past year, a rather unusual development, and police raids against suspected sympathizers have taken place in other parts of China, as in Beijing. Both are hopeful signs as to whether the movement can spread. One also notes that a number of solidarity rallies have taken place globally, such as in Germany, and an international petition of scholars with 238 signatories has been launched. However, whether this can happen remains to be seen.