OUTRAGE HAS broken out in Japan following homophobic comments from Japanese politician Mio Sugita, a member of Shinzo Abe’s conservative Liberal Democratic Party (LDP), who is a member of the Lower House of the Japanese Diet. Although Sugita is a not a prominent member of the LDP, as a junior politician her outspoken views against LGBTQ individuals and other minorities in Japan have attracted controversy in the past.

In particular, Sugita referred to gay couples as “unproductive” members of society because “these men and women don’t bear children” and accused them of being a waste of taxpayers’ expenses in a recent article in the monthly magazine Shincho 45. Backlash in Japan has been large enough that this would lead to demonstrations last Friday outside LDP headquarters in Chiyoda, Tokyo. 5,000 participated in demonstrations, with demonstrators referring to Sugita’s comments as “hate speech.” 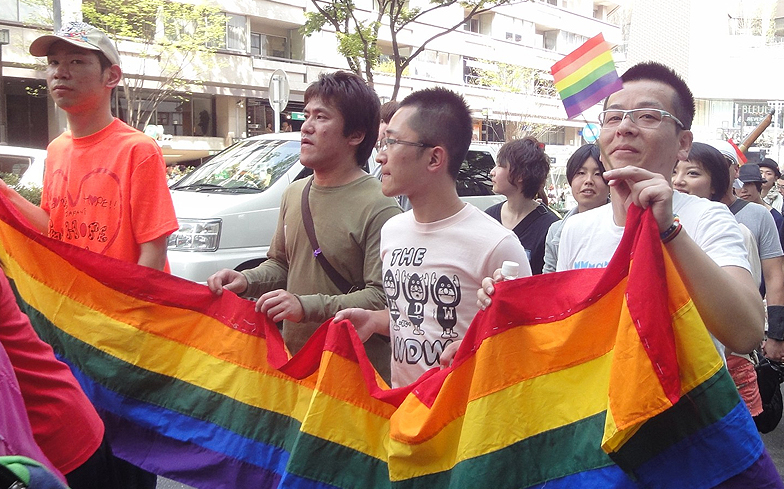 Sugita was later found to have have previously denigrated members of the Japanese LGBTQ community in a 2015 interview. In the past, Sugita has also attacked Japanese #MeToo activists for attempting to seek justice for endemic problems of sexual harassment and assault in Japan, resorting to victim-blaming rhetoric, and denied the use of comfort by the former Japanese empire.

Japanese politicians including former prime minister Yukio Hatoyama of the Democratic Politician of Japan, fellow LDP member and Lower House Diet member Shunsuke Takei, and Taiga Ishikawa, ward assembly member for Toshima, Tokyo and one of Japan’s few openly gay politicians have criticized Sugita’s comments. However, the LDP has seen criticism for failing to censure Sugita, and other members of the LDP have followed up with similarly bigoted comments.

In general, as Japan’s strongest conservative party, the LDP has a long history of discrimination against members of the LGBTQ community, as well as women, general pointing to the party’s regressive politics on sexuality. Current Japanese prime minister Shinzo Abe has claimed that gay marriage is unconstitutional, although legal arguments have been made by gay marriage activists that the Japanese constitution does not stipulate gay marriage as unconstitutional. 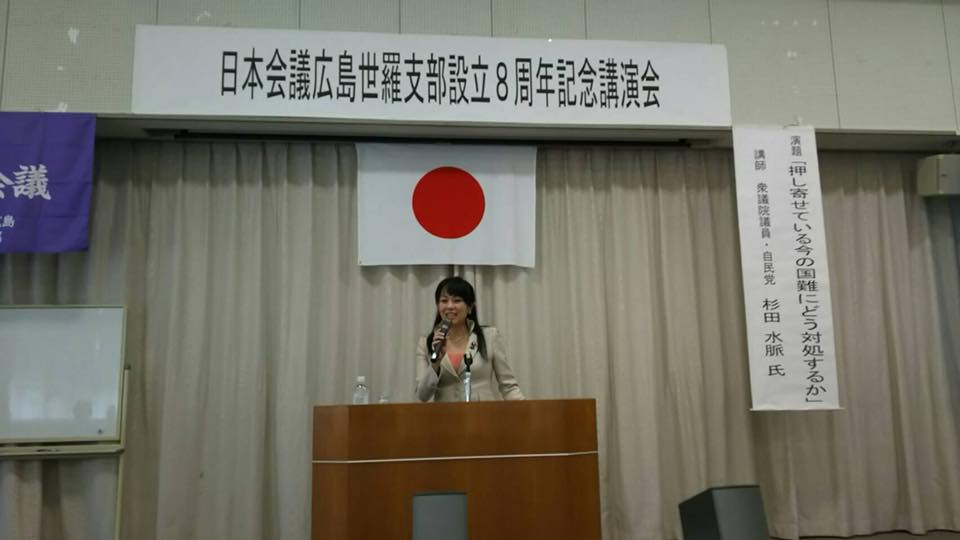 Protest against Sugita’s comments probably is a sign of the growing strength of Japan’s LGBTQ movement, which has historically been late in its development relative to other parts of the world. One notes, for example, that pride parades only began in Japan as late as 1994. The LGBTQ movement has been emboldened by Shibuya in Tokyo moving towards recognition of same-sex marriages in 2015—although it must be noted that this has also led conservative forces in the LDP, including Abe, to increasingly see gay marriage as a social threat. Rifts have appeared in elements of the LDP, including Abe’s wife, Akie Abe, publicly supporting LGBTQ causes through participating in pride parades even as she otherwise hews to her husband in terms of right-wing nationalistic and revisionist views of Japanese history.

But with problems of a decreasing birthrate and increasingly elderly population, one continues to see a great deal social discourse in Japan that claims that members of the LGBTQ community are drains on society for failing to reproduce, the so-called social issue of shoushika. With efforts by state actors to encourage Japanese young people to have more children, this may contribute to discrimination against members of the LGBTQ community.

And, indeed, views such as Sugita’s are not particular to Japan. Taiwan has been touted as potentially being the first country in Asia to legalize gay marriage and the Tsai administration has sought to emphasize this as a way of distinguishing Taiwan from China, despite having backed away from overt support of gay marriage due to resistance from elements the DPP. 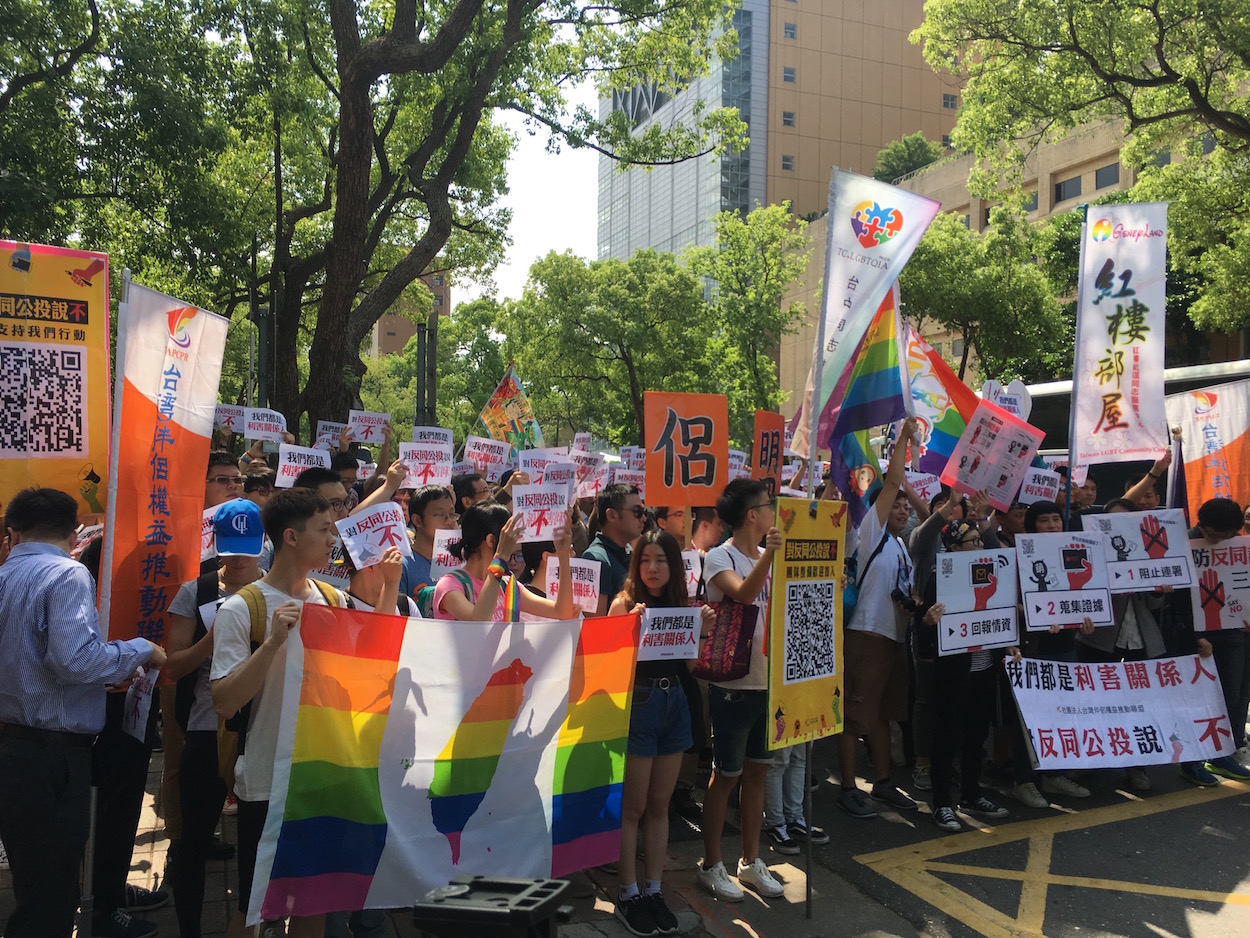 But one does well to remember Taiwan also suffers from issues of a low birthrate and a growing elderly population. The Taiwanese birth rate is even lower that of Japan’s and, unsurprisingly, gay marriage advocates have also been criticized as contributing to the demographic crisis which faces Taiwanese society and, in this way, being socially unproductive forces. As such, arguments similar to Sugita’s have been made in Taiwan before on numerous occasions, and are among those made by anti-gay groups presently opposed to gay marriage.

In this way, current demonstrations in Japan both serve as a model to examined for Taiwan in a time in which the marriage equality movement must overcome a conservative opposition, as observed in a current referendum against gay marriage launched by anti-gay groups. One observes the similarity in social discourse between Taiwan and Japan among opponents of gay marriage. Perhaps all this merely points to homophobia as an international issue which marriage equality advocates in Taiwan and Japan should jointly tackle, then.