A MEMORIAL CEREMONY commemorating the one year anniversary of Chinese dissident Liu Xiaobo’s death was held in Taipei today, with the unveiling of a statue of Liu. Similar events took place across the world, including the unveiling of a similar statue in Hong Kong. The statue unveilings also take place in a similar timeframe as the release of Liu’s widow, Liu Xia, who has been kept as a political prisoner by China since Liu’s death. 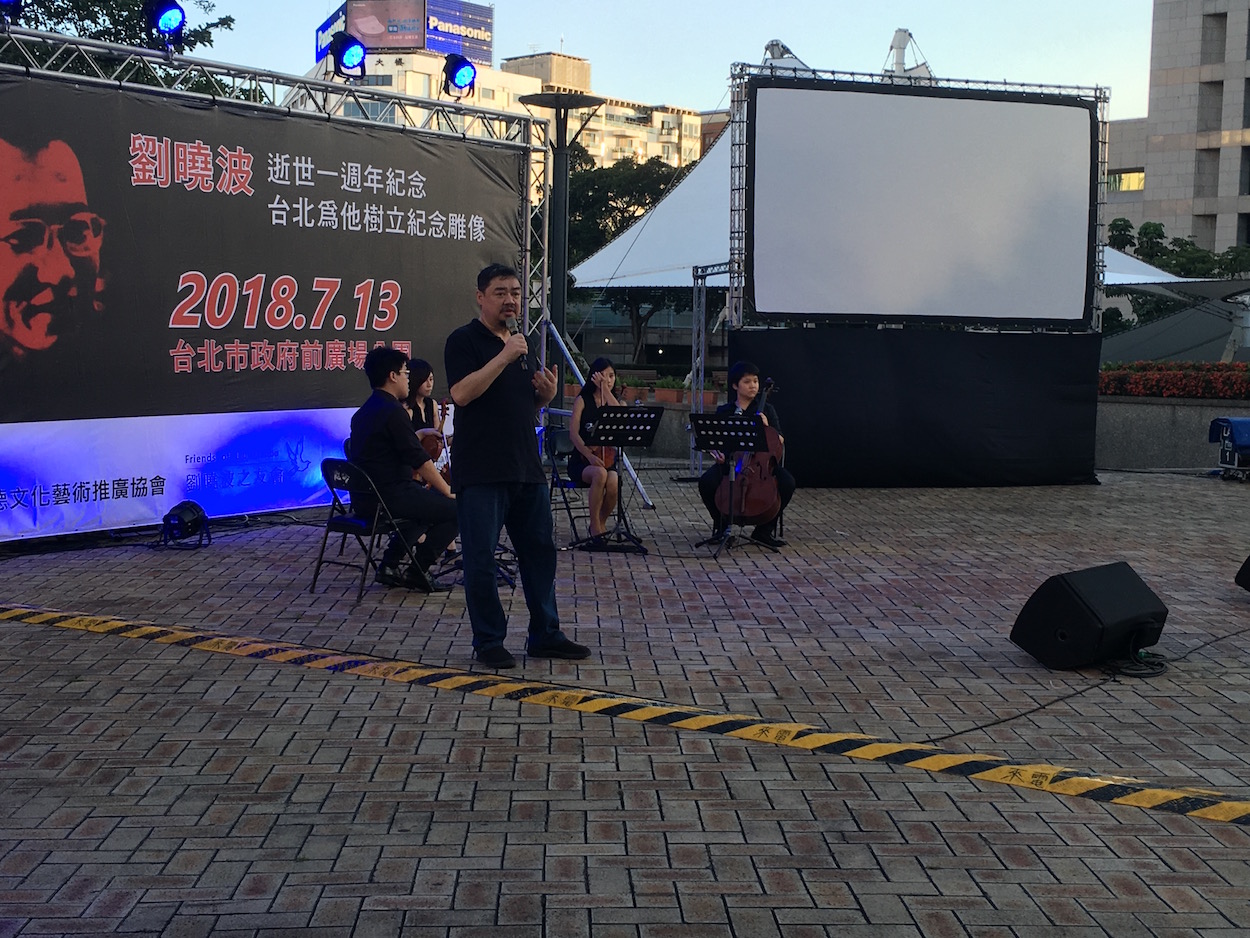 Although not a highly publicized event, the statue of Liu in Taiwan had been planned for some time in an effort spearheaded by Wu’erkaixi, one of the student leaders of Tiananmen Square protests of 1989. Wu’erkaixi, who was present at the memorial ceremony today, stated that he had been a student of Liu in the past, and that Liu had interceded on behalf of Tiananmen Square student demonstrators in the past. Wu‘erkaixi also spoke of the shock by his and fellow Tiananmen Square Massacre survivor Wang Dan when the Chinese government made public that Liu had cancer, speculating that if the Chinese government had revealed this, this may mean that Liu only had a few months to live. In the end, Liu would pass away a few weeks later, making Liu the first Nobel Peace Prize winner to die in prison since 1935 winner Carl von Ossietzky, who died after several years in Nazi German prison camps.

The statue was located in Taipei City Hall Plaza, a location that Wu’erkaixi stated was apt because of its proximity to Taipei 101, which is frequently visited by Chinese tourists. The statue was not directly a statue of Liu, but took the form of a book with a rose on it, an image of Liu’s face, and an empty chair. Artist Cheng Ai-hua, who made the statue, would explain the iconography of the statue. The book was to represent freedom of speech, as well Liu’s own frequent writings, while the empty chair drew on the iconography of Liu’s empty chair when he was awarded the Nobel Peace Prize, and was designed so that passers-by would be able to sit in the chair and in that way metaphorically dialogue with Liu. On the other hand, the rose was to connect Liu’s struggle to push for political freedoms in China to the frequent rose iconography used in the Taiwanese democracy movement, particularly regarding “Nylon” Deng Nan-jung, who self-immolated himself in 1984 to demonstrate restrictions on freedom of speech under the KMT. 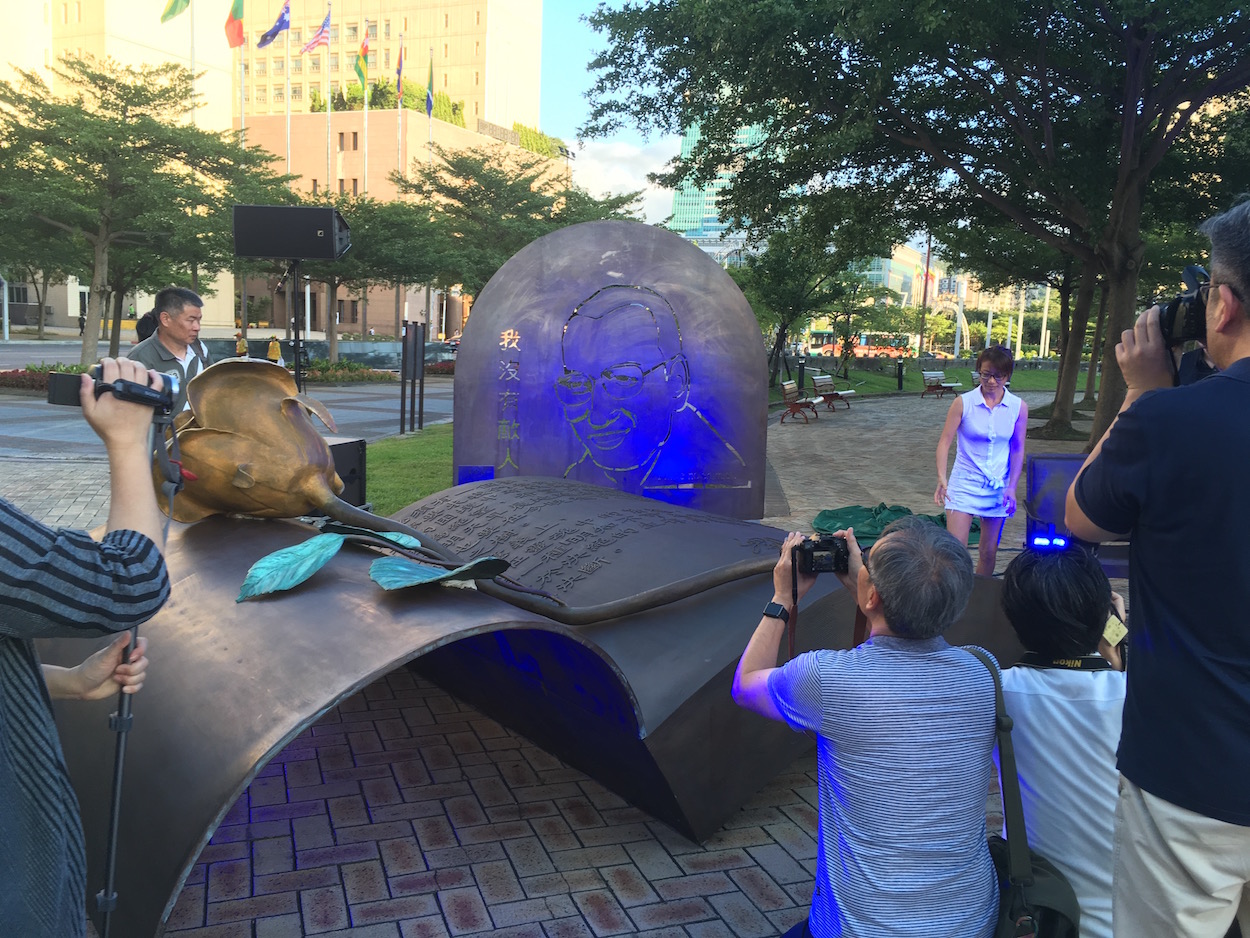 Present at the demonstration would be spokespersons for organizations including Reporters Without Borders, represented by Taipei bureau head Cedric Alviani, the Taiwan Support China Human Rights Lawyers Network (臺灣聲援中國人權律師網絡), Vietnamese political freedoms activists, and others. A video recording of former vice president Annette Lu filmed for the event was also played. Speakers cited their belief that China imprisoning Liu until his death from cancer did not mean that Liu’s struggle for democracy would fade away, that China would not be able to kill Liu’s ideas. The majority of speakers, who were Taiwanese, sought to point to how Taiwanese had participated in efforts to aid Chinese human rights workers, to draw connection between the undemocratic conditions faced by Taiwan in the present and Taiwan in the past under the KMT, raising also Liu Xiaobo’s support for Taiwanese self-determination, and the importance of transitional justice efforts in Taiwan in order to secure the gains made by democracy in past decades in Taiwan.

Apart from speeches, documentary footage of Liu’s life was shown, and a string quartet performed several songs. In all, the demonstrations was not heavily attended, having only a few dozen attendees, but the idea may have been to avoid counter-demonstrations from pro-China groups. Pro-China groups have demonstrated against past attempts to erect a statue of Liu in Hong Kong and it is possible that the Liu statue in Taipei will become a target for vandalism by pro-China groups in the future.

In the meantime, it remains to be seen as to whether international pressure will contribute to the release of political prisoners of conscience in China. Liu Xia’s release, for example, came unexpectedly as a result of German pressure on China to release political prisoners of conscience. However, with China otherwise as remorseless as ever regarding human rights, this remains to be seen.