OUTRAGE BROKE out earlier this month due to an ad for a Taiwanese kindergarten posted on social media stating that the kindergarten will “not accept applications from people not from predominantly English-speaking countries, or who are black or dark-skinned.” The ad was posted in the Facebook group, “Substitute teachers needed in Taipei (City/County)” for Kang Chiao Kindergarten.

Unfortunately, such ads are not uncommon in Taiwan. This would not be the first time that outrage has broken out against this kind of ad either, but such outrage usually remains confined to expats in Taiwan. In a pleasant surprise, this time outrage spread to local Taiwanese, with the ad translated into Chinese. This eventually led to coverage in TVBS and Apple Daily, as well as English language media outlets.

For its part, Kang Chiao Kindergarten has attempted to defend itself, by claiming that the ad was posted by an employee of the kindergarten on her own, and that the racial specifications of the ad were not asked for by the kindergarten. Kang Chiao has since issued a public statement that the kindergarten, “does not discriminate on the basis of race, creed, color, ethnicity, national origin, religion, or sexual orientation” and that its most important criteria for hiring is based on “education qualifications and related academic experience”. Racial discrimination in hiring practices is illegal in Taiwan, but this does not prevent it from occurring on a widespread basis nonetheless.

Yet there are several reasons why the appearance of such an ad should not surprise. Namely, both racial stereotyping and racial discrimination remain alive in well in Taiwan, particularly against individuals who are dark-skinned or black.

We might begin by first noting point in the advertisement about “not accept[ing] applications from people not from predominantly English-speaking countries.” English teaching in Taiwan generally does not account for the validity of English speakers from countries in which English is not the predominant language to teach, even if English is their native language.

One notes that such such beliefs about English speakers not from predominantly English-speaking countries should be self-evidently absurd. If one were to apply such beliefs to Taiwan itself, one notes that due to the KMT’s decades of attempting to stamp out Taiwanese, Taiwanese is no longer most widely spoken language in Taiwan, but Mandarin is. Should Taiwanese then be deemed unqualified to teach Taiwanese, because Taiwanese is no longer the majority language of Taiwan?

But in Taiwan, English is still generally thought of as a language of predominantly white countries, such as America, the UK, and Canada. Hence the provision in the job application about not accepting applications from those who are “black or dark-skinned,” who are apparently not viewed as “proper” speakers of English. 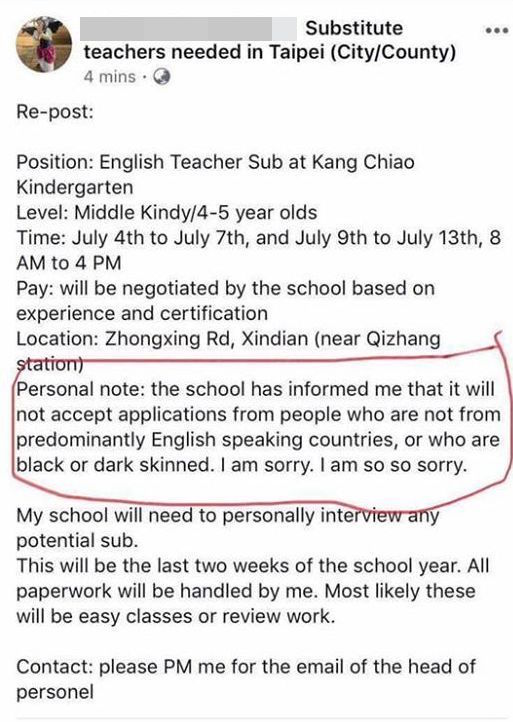 The original ad which provoked anger

Even in cases when English schools themselves do not specify racial requirements for hiring, English schools sometimes will face complaints from parents who do not perceive their children as getting their money’s worth in terms of English education when they hire non-white teachers. As a result, even when English schools have not formalized any discriminatory hiring practices, prevailing social attitudes will still influence their choice of hires.

The structural roots for the view that English is the language of predominantly white countries and the refusal to accept the linguistic validity of other English speakers may return to that, in general, the “international world” is narrowly conceived of in terms of the Euro-American world. This may return to long-term causes in the forcible entrance of western modernity into Asia in the early 20th century at the hands of America and European powers, and Taiwan’s post-war subordinate relationship with America and western powers, conceived of in Taiwan as racially white countries and countries commonly thought of as more “advanced” or “civilized” than Taiwan.

Likewise, one also notes that despite that it is sometimes touted that Taiwan is an immigrant society, given its many historical waves of migration, and that Taiwan is an increasingly pluralistic society with its rising number of immigrants, Taiwan still remains mostly Han in ethnic composition. As a result, Taiwanese sometimes have difficulties conceiving of multi-ethnic societies.

But such issues are further compounded by discrimination against those who are black or dark-skinned in Taiwan. Cultural attitudes in Taiwan and other East Asian countries have historically associated darker skin with lower social class, such as those engaged in manual labor. Likewise, indigenous remain among the most discriminated against social groups in Taiwan and have been for centuries, despite having been the original inhabitants of Taiwan before Han settlement. And despite the fact that southeast Asian immigrants in Taiwan are now so prevalent in Taiwan that one in ten children in middle school and elementary school have a foreign born parent, usually a mother, discrimination against southeast Asian immigrants remains endemic.

In some cases, Taiwan has actually internalized western racism regarding blacks or dark-skinned individuals, as sometimes transmitted to Taiwan through western media. But this is far from absolving Taiwanese of guilt. 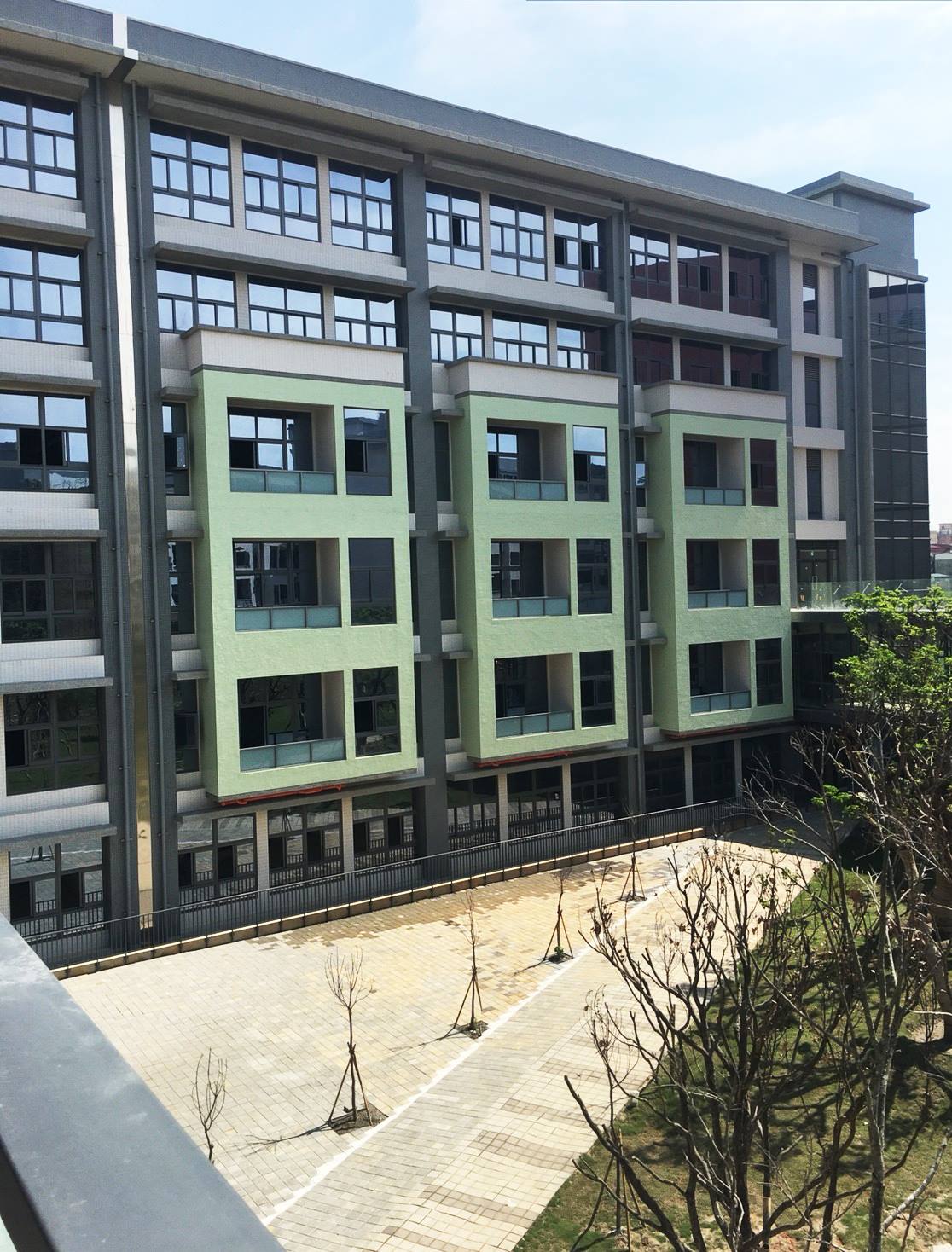 Particularly with regards to southeast Asian immigrants, observes many cases in which Taiwanese treat individuals of darker skin tone than themselves as though they simply were not human. Examples would be a recent incident in which Taiwanese employers bragged about how little days off they gave their migrant workers in a Line group, or numerous incidents of migrant fishermen being beaten to death and their bodies dumped at sea, just to name some cases. In this sense, discriminatory hiring policy only scratches the surface of racism in Taiwanese society.

A conversation on the racial prejudices which continue to exist in Taiwanese society is long due. Even when such conversations are had among expats in Taiwan, usually these conversations do not spread to Taiwanese due to the persistence of the linguistic barrier. However, it is a refreshing start for their to be outrage over what would have otherwise gone unremarked on as simply another post on Facebook. What remains is to continue the discussion and to widen its scope of this discussion then, then.