Demonstration Against Fish Die-Offs Caused By Formosa Plastics In Vietnam

Formosa Steel initially denied any wrongdoing, with the Vietnamese government defending Formosa because of its investment in Vietnam and attempting to attribute the fish die-offs to algae blooms instead of Formosa Steel’s steel mill. When Formosa Steel later admitted some level of wrongdoing, this took the form of telling the Vietnamese people that they would have to choose between the steel mill or fish, which proved enraging of the public.

The protest was inspiring of mass protests, a rare occurrence given the authoritarianism of the ruling Vietnamese Communist Party. Nevertheless, the government shrugged off protests. While compensation was eventually promised to victims from Formosa and Formosa was made to pay the Vietnamese government, in the end, only a small amount of compensation was paid to few victims. This raises the possibility that very little, if any compensation was genuinely paid by Formosa. If any money was paid, this simply ended up in the hands of Vietnamese party-state, and any reparations paid by Formosa still could not make up for the utter destruction of the livelihoods of Vietnamese fishermen and those working in industries connected to fishing.

The demonstration Wednesday was organized by a coalition of Taiwanese NGOs including the Taiwan Association for Human Rights, the Environmental Jurists’ Association, and a number of Vietnamese migrant groups, primarily organized through the Catholic Church. The Catholic Church itself played a key role in organizing demonstrations in Vietnam over the past two years and that role extends to Taiwan, primarily under the leadership of priest Peter Nguyen Van Hung.

Apart from holding a press conference, demonstrators also presented a petition to shareholders of Formosa Steel, using members that attended the meeting as stockholders. Near the end of the demonstration, police declared a notice of an illegal gathering. It is unknown as to why police did so, except as an intimidation measure. 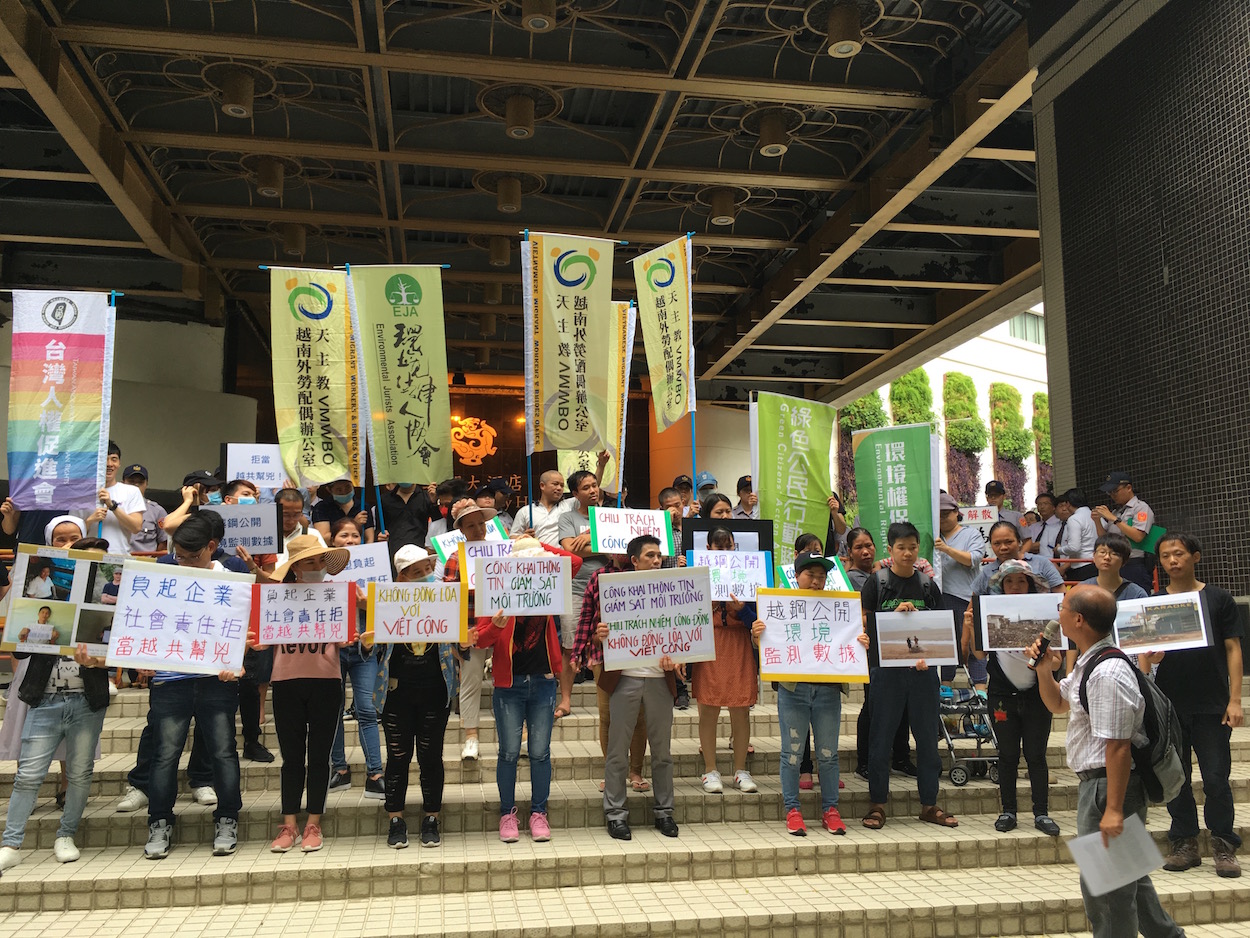 Speakers raised that two years after the disaster, many Vietnamese affected by the fish die-offs are still without work. This has resulted, for example, in the dispersion of families because children without work would leave the fishing villages where they originally made their living through fishing. Similarly, in the two years since the disaster, the Vietnamese government has taken to arresting bloggers who continue to spread information about the disaster, the most famous of which is “Mother Mushroom.” Some bloggers have been sentenced to upwards of ten years in prison, even including bloggers in their early twenties.

Demonstrators were also generally critical of the inaction of the Tsai administration. Actions by Taiwanese civil society groups have included demonstrations in 2016, 2017, and 2018, though these were never large. A PTS documentary film crew would also take great personal risk to travel to Vietnam to film a documentary on the fish die-offs, as would DPP legislator Su Chih-Feng, who would be detained by the Vietnamese authorities at the airport.

However, Taiwanese NGO groups in particular have called attention to that the Tsai administration likely does not wish to upset the Vietnamese government, seeing as Vietnam is an important target for the New Southbounds Policy aimed at building stronger ties with southeast Asian countries in order to wean Taiwan off of economic dependence on China.

Although the Tsai administration raises that it offered to send experts to Vietnam and take other measures to aid Vietnam, it cites that the Vietnamese government refused such aid in order to justify inaction, and members of Taiwanese civil society accuse the Tsai administration of using this as an excuse. Moreover, members of Taiwanese civil society sometimes will accuse the Tsai administration of, in some cases, seeking to directly collaborate with the authoritarian Vietnamese Communist Party. For example, while organizers had hoped to hold a talk with Vietnamese activists travelling from Vietnam, they found that their visas were refused by the Taiwanese government at the last minute, including one case of a visa being cancelled directly at the airport. 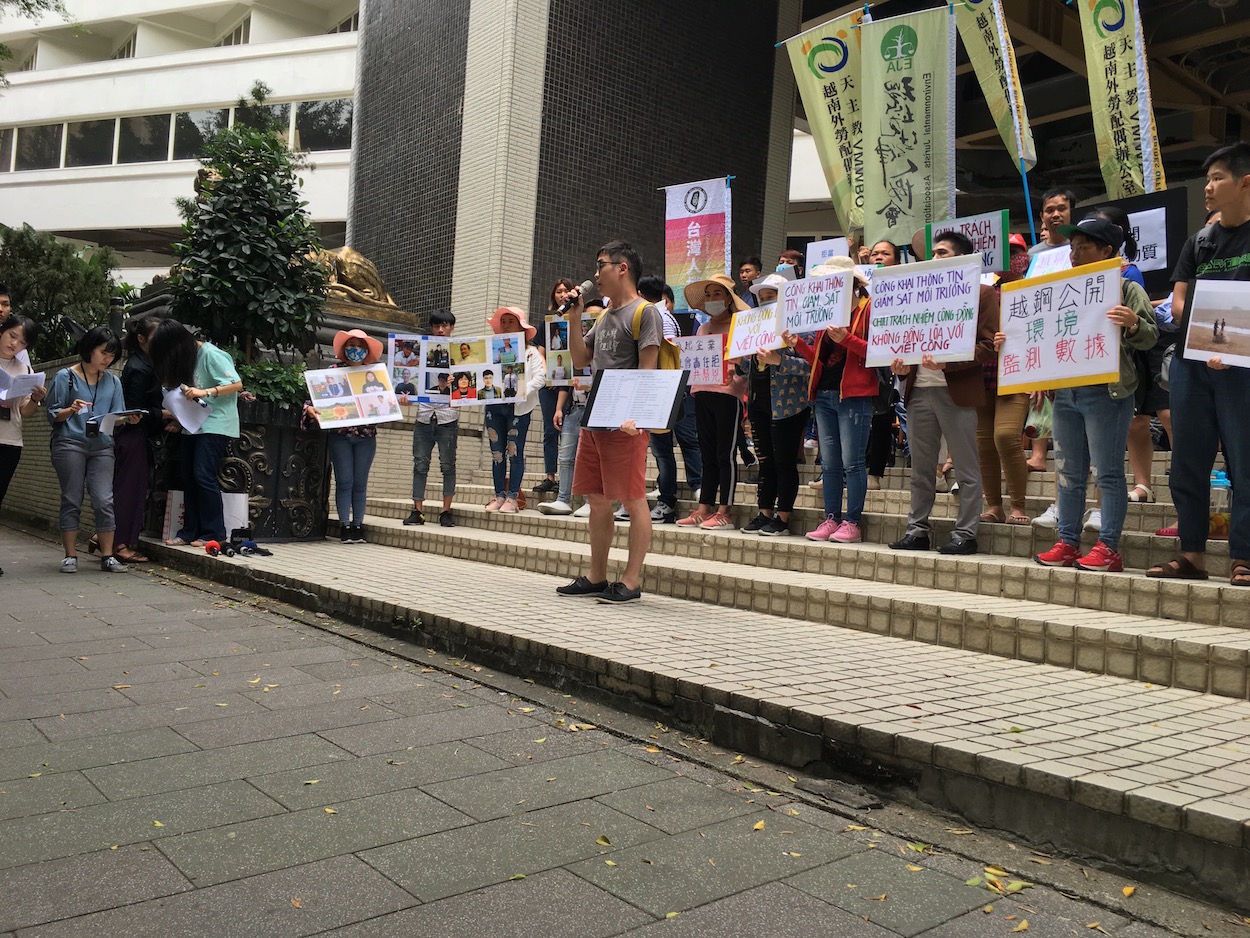 In such cases, members of civil society point to the Tsai administration’s leaving human rights out of the New Southwards Policy, something that is reflected in the text of legislation about the New Southwards Policy excluding language about human rights even when this has been raised by civil society groups. Similarly, members of civil society comment on how “Formosa”—another name by which Taiwan has historically been known—is now associated with an environmental disaster in the eyes of Vietnamese, although some questions remain about how much Vietnamese demonstrators differentiate between Taiwanese and Chinese.

Either way, justice for Vietnamese affected by the fish die-offs remains to be won. More action is needed