PUBLIC COMMENTS made late last month by Hedy Lee (李文), the eldest daughter of the recently deceased Lee Ao (李敖) and a media personality in her own right, have provoked ire from members of the Jewish community in Taiwan. These comments took the form of an open letter on social media penned by Lee to the Ministry of Labor claiming that Israeli companies operating in Taiwan were scamming their customers, specifically targeting Forever Flawless, L’core, Orogold, Premier, Seacret, Gratiae, and other brands selling their goods in department stores, “tricking Taiwanese women out of their money and self-esteem.”

Lee would criticize the lack of information available about these companies online, lack of ingredient labels, and large differences in pricing. Lee would go on to allege money laundering, suggest that these companies were potentially violating work regulations for foreigners.

The comments in question

However, Lee would descend into outright antisemitism in claiming in subsequent comments appended to her open letter that “all Jews have a head for business” and wondered, “Why do Jews need to scam people?” Lee would also refer to “Jewish scum” on her Weibo account and state that “Jewish sales tactics could bring the dead back to life.” Lee’s comments would lead to a statement by the Chabad Taipei Jewish Center criticizing her statement for its discriminatory comments against Jewish people.

To back her claims, Lee would cite anything from WikiLeaks reports to random crime reports about crimes committed by Israelis to conspiratorial YouTube videos. Nonetheless, as a media personality, this would not prevent her claims from being picked up on and reported in Taiwanese media nonetheless.

Indeed, one notes that Lee has a history of discriminatory comments against foreign men in taiwan, making wanton accusations about foreign men harassing Taiwanese women. Lee also indicates a more general anti-foreigner bias in her open letter, opening her letter by stating that since moving back to Taiwan in July 2017, she has been “closely concerned with the illegal behavior of foreigners in Taiwan.”

Lee’s comments are ironic enough, when Lee was born in America, and is actually Chinese-American—that is, although a second-generation waishengren, Lee seems to follow her follow her father in terms of identification with China over Taiwan, the elder Lee having been born in China before coming to Taiwan when young. Others might refer to Lee as Taiwanese-American; either way, Lee’s own Facebook profile even states that her mother tongue is English. But like her father, controversial statements seem to be fairly common for Lee, Lee having weighed in on the Sun An-Tso case to urge heavier punishment for Sun, for example.

However, what Lee’s statement fundamentally illustrates is a number of racial generalizations which are fundamentally racist and antisemitic. For example, it may be very possible that an Israeli company has been guilty of wrongdoing in Taiwan, but this is hardly generalizable to claims about the Jewish character. Apart from that that it is important to raise that not all Jews are Israelis and vice-versa, one also notes that Lee’s view of Jews prove sweeping and monolithic, as observed, for example, citing completely random incidents of crimes committed by Jews or Israelis to tie that together with practices that she alleges has been committed by Israeli companies in Taiwan. 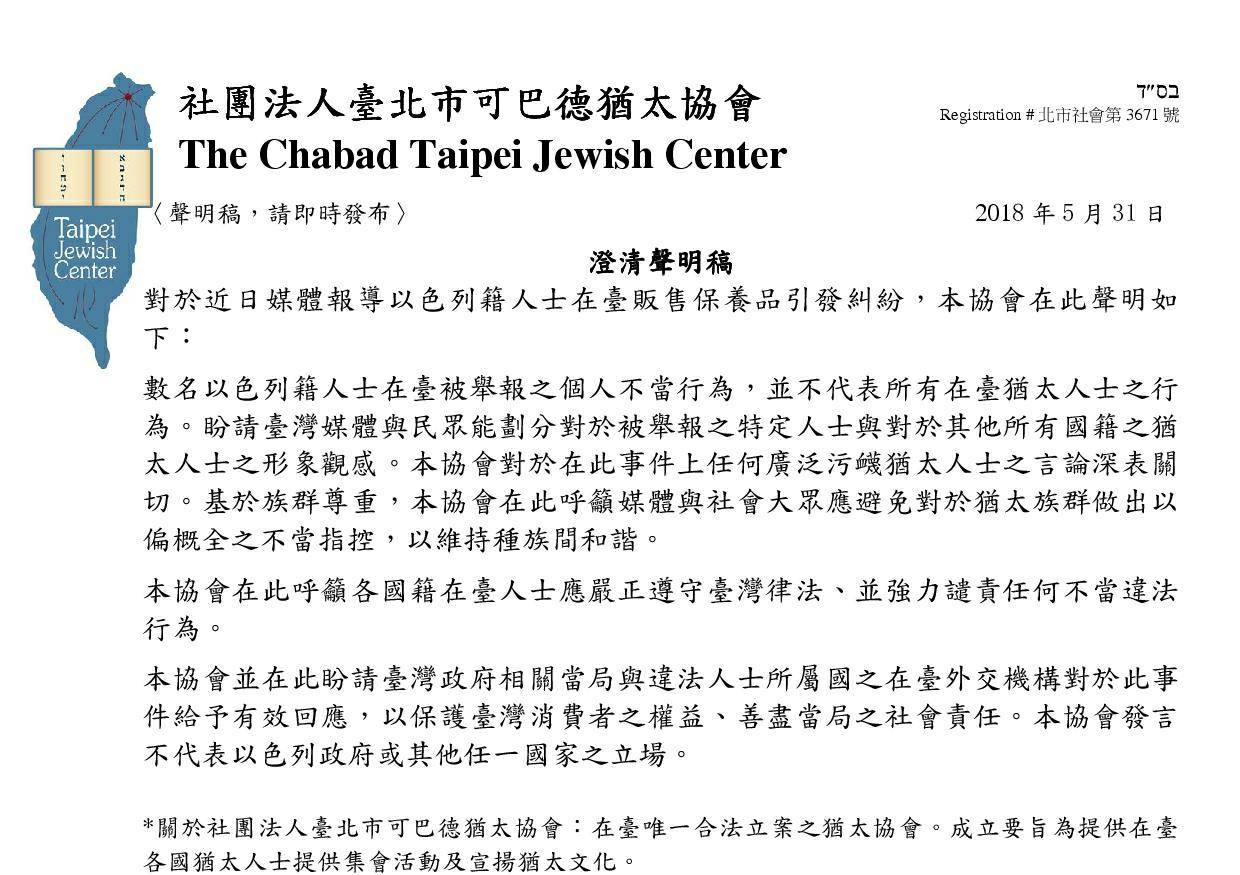 Letter responding to Lee’s comments from the Chabad Jewish Center

That completely baseless claims by Lee have picked up by Taiwanese media points to the means by which Taiwanese society has not completely moved beyond broad racial generalizations about Jews or other races. One notes, for example, the strange genre of popular self-help books easily found at large bookstore chains devoted to teaching Taiwanese about the “secrets of the Jews”—these thankfully being primarily about education and successful money-making rather than, say, the Protocols of the Elders of Zion. But though “positive” stereotypes, racial generalizations still prove harmful overall.

More seriously, one remembers the deeply questionable 2016 skit by Hsinchu high schoolers that dressed up as Nazis for a school event, or the strange phenomenon of Nazi kitsch found throughout Taiwan and other Asian countries, which suggest that there is a failure to engage with the history of discrimination and persecution of Jews in Taiwan and other parts of Asia. Statements by Hedy Lee may only scratch the surface in this regard, then.