DEMONSTRATIONS AGAINST a plan by the Vietnamese government to create special economic zones that will be leased to China took place outside the Vietnamese representative office in Taipei last weekend. Fears have been raised that this will allow for Chinese economic and political influence to enter Vietnam, with China eventually aiming to assimilate and absorb Vietnam wholesale.

The demonstrations were part of coordinated actions by Vietnamese inside and outside Vietnam against this government plan, with protests also taking place in Vietnamese cities as Hanoi and Ho Chi Minh City, as well as cities outside of with substantial Vietnamese populations as Taiwan and Australia. One hundred Vietnamese, mostly migrant workers, participated in the demonstrations last weekend in Taipei. The demonstration was organized by the Vietnamese Migrant Workers and Brides Office, founded by Peter Nguyen Van Hung, and the Taiwan International Workers’ Association, one of Taiwan’s leading migrant worker organizations. The concept of special economic zones resemble nothing so much as the treaty ports which western powers established in China in the late 19th and early 20th centuries. Indeed, by way of comparison, one notes that British control of Hong Kong began with what was a originally termed a ninety-nine year loan, yet this was indisputably British colonialism pure and simple, and this colonial legacy irreversibly separated Hong Kong from China, as we see today.

Yet for the Vietnamese people, it has been understood that this plan is aimed at China. Protests are rare in Vietnam, give the repressive nature of the Vietnamese Communist Party. And so, that protests happened at all is a sign of the severity with which the plan is perceived by members of the Vietnamese public. Again, to raise a Taiwan comparison, one notes the establishment of special economic zones and opening up the Taiwanese real estate market to Chinese were pushed for by the pro-unification Ma administration shortly before the outbreak of the 2014 Sunflower Movement, suggesting that this may be a strategy employed by groups operating as proxies of China in more than one location, and that for protest to occur against this is not unprecedented. 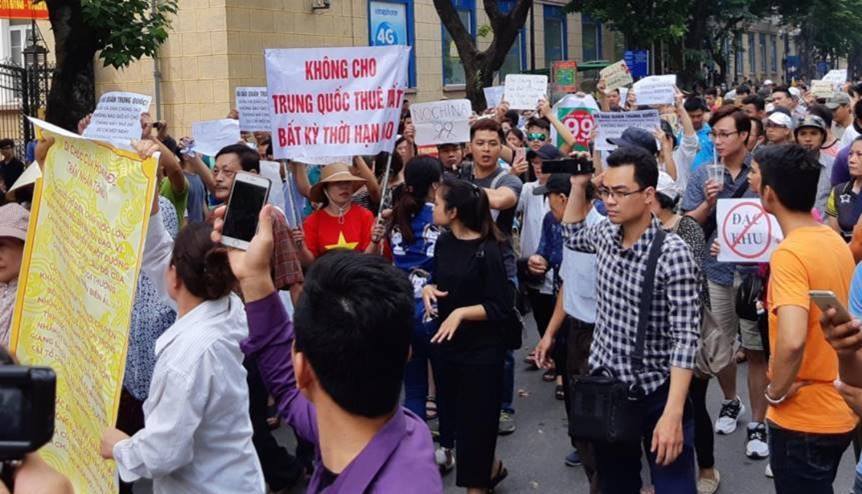 As observed in current events, what is perceived as the possibility domestic colonization of Vietnam by China also raises concerns. In territorial disputes which Vietnam, Chinese nationalists have drawn on Vietnam’s past as a tributary state of China, and evident Chinese influence in the Vietnamese culture and language to suggest that China could justifiably claim Vietnam, and this may not have gone unnoticed by Vietnamese, who fear that China will make efforts to politically and culturally assimilate them.

Again, China is seen as a political, economic, and military threat to many Vietnamese. China presents itself in the everyday reality of many Vietnamese as a capitalist exploiter, which destroys the Vietnamese environment with its factories while exploiting the labor of the Vietnamese who work for Chinese companies operating Vietnam. Likewise, China also presents a geopolitical threat through territorial disputes with Vietnam, as observed in disputes over fishing waters, and South China Seas islands. Riots that killed 21 and injured over 100 broke out in 2014 after China deployed an oil rig in South China Seas waters claimed by Vietnam and these can indeed be seen as “race riots” against Chinese living in Vietnamese—something far from unseen in the history of southeast Asia through the course of the 20th century, particularly due to backlash against wealthy overseas Chinese capitalists or merchants operating in southeast Asia leading to backlash against all Chinese—most famously in recurrent riots against Chinese in Indonesia.

However, one generally suspects that geopolitical concerns about China merge together with labor discontents against how Chinese businesses operating in Vietnam treat their workers. In this manner, one cannot simply take the view that this is simply some sort of racialized “Sinophobia” by zeroing in on anti-Chinese rhetoric in protests to the exclusion of all other concerns.  Obviously, there are the dangers of such protests indeed becoming purely race riots, but Chinese capitalists are, after all, the enemies of both the Chinese and Vietnamese working class, and that must be kept firmly in mind.

Vietnamese prime minister Nguyen Xuan Phuc has stated that the lease period will be reconsidered. Vietnamese officials also downplay the influence of this plan. But it seems unlikely that the Vietnamese Communist Party will back down from the plan, having demonstrated many times in the past that it is willing to shrug off protests from the Vietnamese people and is more likely to violently repress them than to acquiesce to demands.

Frankly, all this would be par with regards to countries facing the threat of colonization attempt to appease potential colonizers. This usually does not work out well for such countries, as best observed with the example of Qing dynasty China itself, when confronted by western imperialism. Although ceding treaty ports to western power seemed like a way of selectively staving off and containing western political encroachment, this still led to the ultimate collapse of the Qing dynasty, since western political, economic, and military power simply could not be contained. One observes that this is part of broader efforts by China to lease ports worldwide, as also seen in the Gwadar Port in Pakistan, China’s military port in Djibouti, and with the Piraeus Port in Greece.

Seeing as Chinese influence in Vietnam is sufficient cause for protest by the Vietnamese public, then, if protests are able grow substantially and able to shrug off repression, this could lead to a crisis of legitimacy for the Vietnamese Communist Party somewhere far down the line.

Yet one notes that—far from indicating that Vietnam could be a potential ally against Chinese empire—protests in Vietnam put Taiwan in an odd position. Apart from that we might note that some Taiwanese factories in Vietnam have halted production because of workers taking leave to demonstrations, the last significant set of protests in Vietnam were against fish die-offs caused by a steel mill built by Formosa Steel, a Taiwanese company that is a subsidiary of Formosa Plastics. These fish die-offs were the largest ecological disaster in Vietnamese history and they led to an outbreak of rare protests against the Vietnamese Communist Party.

However, the Tsai administration significantly chose to remain silent on the issue, probably not wanting to offend the Vietnamese Communist Party. Apart from offering to send Taiwanese experts to Vietnam, something the Vietnamese government turned down, the Tsai administration did little. And with few exceptions Taiwanese media acted as though Vietnam was unfairly treating a Taiwanese company, ignoring that the Vietnamese Communist Party had shrugged off substantial protests to defend Formosa Steel at its own peril, and claiming that the fines imposed on Formosa were a form of persecution.

With regards to the current New Southbounds Policy advanced by the Tsai administration in order to strengthen ties with southeast Asia to wean Taiwan off of economic dependence on China, the Tsai administration likely did not wish to offend the Vietnamese Communist Party. This is nothing new for Taiwan, given that Taiwan maintains relations with its few remaining diplomatic allies—many of which are ruled by authoritarian regimes—by throwing money at them through “dollar diplomacy”. And while the Tsai administration may claim that it is no longer engaging in “dollar diplomacy” but instead attempting to engage in people-to-people relations, this proves to be plainly untrue in the case of Vietnam, in which the Taiwan has chosen to side with an authoritarian regime over a people’s movement.

Thus, while recent protests are against Chinese influence, the Tsai administration probably will not make any real moves on the issue to try and ally Taiwan with Vietnam because it will continue to be afraid of offending the Vietnamese Communist Party. It is sometimes unclear to what extent Vietnamese differentiate between Taiwan and China, many likely thinking Formosa Steel a Chinese company. But Taiwan may be perceived as simply another colonizer—this despite the fact that, as demonstrations in Vietnam show, Vietnam shares the condition of being a country caught on the perimeter of an expanding Chinese empire.

Both Taiwan and Vietnam can be thought of as “Third World” nations in a manner resembling the original definition of the term during the Cold War, used to refer to smaller countries caught between the two superpowers of the America and the Soviet Union and their affiliated blocs, referred to respectively as “First World” nations and “Second World” nations.

During the Cold War, obviously Taiwan was closer to the United States and Vietnam closer to China, which made Taiwan a “First World” nation and Vietnam a “Second World” nation. Yet the great power struggle of the world has shifted to Chinese and American empire and that both nations are caught between the two can be seen as making them something resembling a “Third World” nation in the original sense of the term.