Much Uncertainty Going Forward After The Trump-Kim Summit

IT WILL PROVE difficult trying to evaluate what the effects of the meeting between North Korean leader Kim Jong-un and American president Donald Trump will be going forward. Namely, the meeting produced very little new to show on paper, and can largely be summarized as a media spectacle more than else. What will be significant, on the other hand, is in what terms both leaders understand the results of the meeting to have been and how they act going forward.

Will North Korea Commit To Denuclearization?

NORTH KOREA made no new promises going forward, recommitting to a pledge to disarm its nuclear weapons. For its part, America agreed to vague “security guarantees” for North Korea, and promised to call of joint war games that it holds with South Korea.

Nothing new was gained by America through this. North Korea had already gone into the meeting with a pledge to disarm its nuclear weapons. This was a pledge it had first offered following a historic meeting between South Korean president Moon Jae-in and Kim Jong-un which was aimed at preparing for an eventual meeting between Kim and Trump. 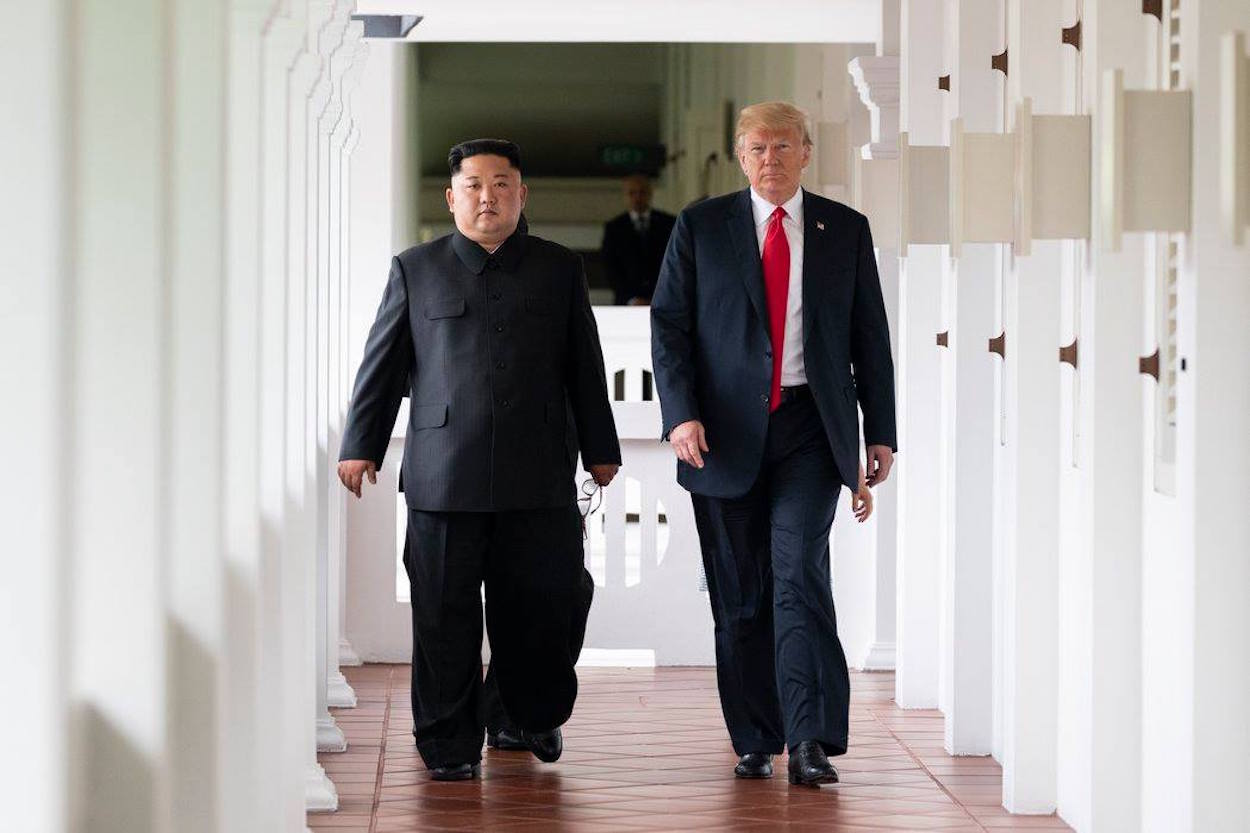 However, in a period in which relations between North Korea and the US saw a low ebb, North Korea had called off its pledge to disarm and suggested that it would not meet with Trump if Trump maintained the hawkish John Bolton as his National Security Advisor. North Korea was alarmed by public comments made by Bolton in which he stated that he expected North Korea to follow a Libya-style model of denuclearization.

North Korea was all too aware that a few years after Libya gave up its nuclear arms following negotiations with America and other western powers, Libyan leader Muammar Gaddafi was killed by US-backed rebels. Bolton had probably made such comments out of a deliberate attempt to sabotage negotiations with North Korea. Bolton has historically distrusted nuclear powers which offered to disarm and, in line with his neoconservative political stance dating from the Bush administration, favored direct military invasion to remove the threat of weapons of mass destruction. As a result of such deteriorating relations, negotiations with America were then briefly called off by Trump late last month before Trump reversed course to meet with Kim today.

Given North Korea’s reversals, it is a question whether North Korea will follow through on its promises to disarm its nuclear weapons. Nuclear weapons are one of North Korea’s few ways to make its voice heard in the international world and it would not give them up except for substantial security guarantees—probably more substantial than those offered by Trump today. Trump, too, shares a history of frequent reversals, as evident in the drama leading up to the meeting today.

ON THE OTHER hand, Trump has been criticized by some analysts as having given up too much ground to North Korea, while also significantly raising Kim Jong-un’s public profile through the meeting today without gaining anything in return. Likewise, while the joint statement issued by Trump and Kim after the meeting does not touch on it, in a speech to members of the press several hours after the meeting ended, Trump suggested that he envisioned a future in which there would be less American troops in Asia. 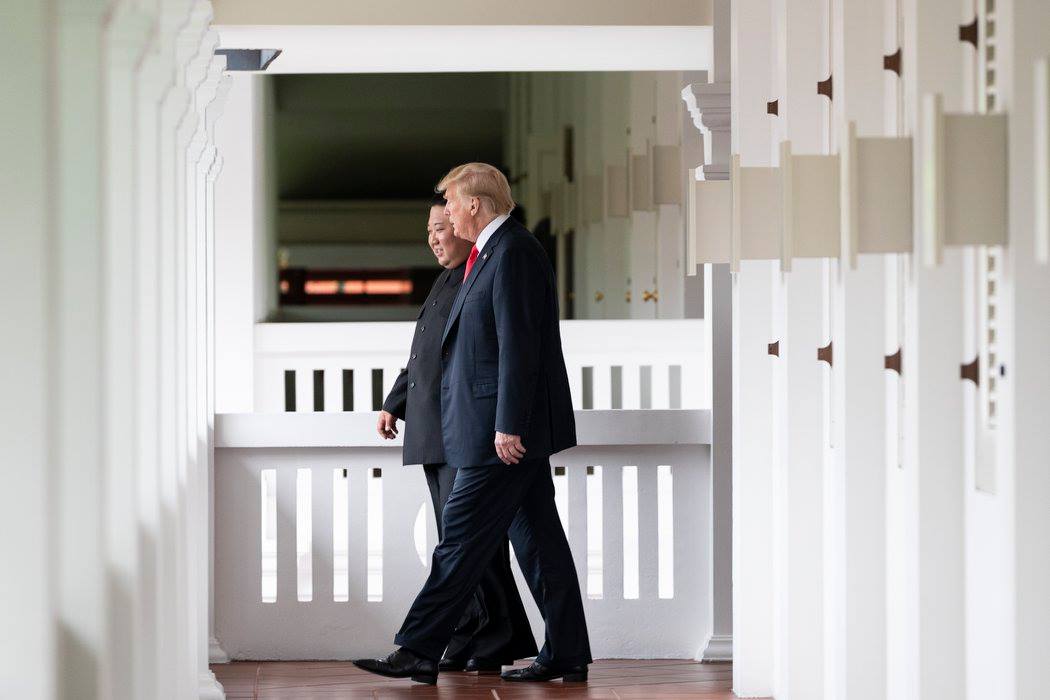 Securing such commitments from Trump probably an aim of Kim’s going into the meeting, seeing as North Korea has long sought the withdrawal of American troops stationed in South Korea. It had previously been unthinkable that North Korea would commit to nuclear disarmament without a withdrawal of American troops stationed in South Korea’s. Indeed, ironically enough, given that Bolton seemed to favor military solutions, Bolton was among those who sat at the negotiating table today in the course of the meeting between Kim and Trump, but statements by Trump in apparent contradictions to what Bolton would advocate may point to how Bolton’s influence on Trump may be decreasing.

Lending credence to the view that Trump is considering troop decreases in the Asia-Pacfic, recent rumors have suggested that a rift may have developed with Bolton in the Trump administration. There have also been reports that Trump has asked for options as to how American troops can be withdrawn from the Asia Pacific.

What Will Be The Reactions Of Other East Asian Countries Going Forward?

THE REACTIONS OF other East Asian countries going forward are largely predictable. China, which backs North Korea as its only ally and which can be said to maintain North Korea as a client state, will be happy with a decreased American military presence in Asia, since this will remove an obstacle to expanding Chinese reach. 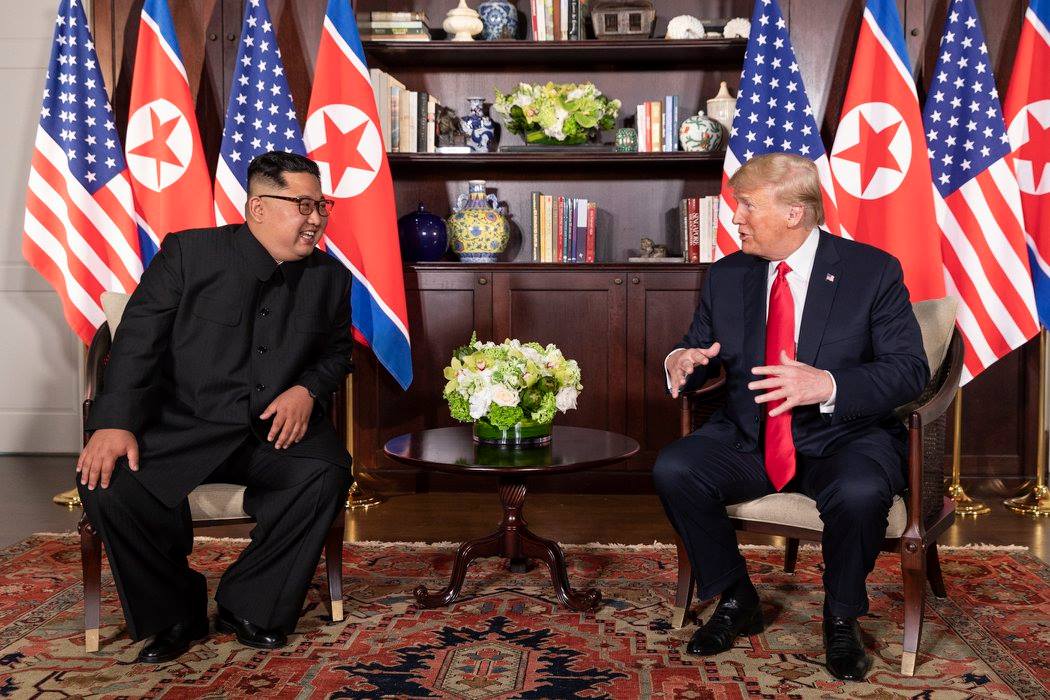 Japanese prime minister Shinzo Abe has in the past attempted to steer Trump away from the possibility of withdrawing American troops from South Korea and Japan when Trump has suggested this before, which first began in 2016. Abe, who has attempted to uncomfortably position himself as Trump’s ally, may attempt to dissuade Trump from this.

At the same time, Abe has historically sought the reinterpretation of the Japanese constitution to allow the Self-Defense Force to fight wars, as part of a longstanding political crusade with roots in the right-wing nationalism of the Abe political dynasty of which Shinzo Abe is latest scion. An American withdrawal may provide the perfect pretext for a renewed push towards remilitarization by Abe, perhaps even allowing him to smooth over recent scandals regarding Abe’s connections to right-wing groups which have made Abe’s continued tenure as prime minister questionable in Japan.

And, in general, in the absence of American power, Japan will rise to become the dominant power to counter China in the Asia Pacific. With any possible weakening of American power in the region, Taiwan will probably pursue closer ties with Japan. The same may occur with South Korea, except nationalist antagonisms between the two can also prove an obstacle to unity.

Given Trump’s Unpredictability, Does This All Mean Anything?

AT THE SAME time, one observes unpredictable oscillation between the two poles of pursuing highly aggressive Asia policy and pursuing highly conciliatory Asia policy in the Trump administration. Trump originally suggested a harsh stance against China and North Korea during Steve Bannon’s ascendancy in the Trump administration, as one of Trump’s most trusted advisor—this would seem to be the role assumed by John Bolton in the present. However, Trump then oscillated towards highly conciliatory China policy with the ascendancy of Trump’s son-in-law Jared Kushner in the Trump administration, Kushner having a more friendly disposition towards China because of his family’s substantial business interests in China. 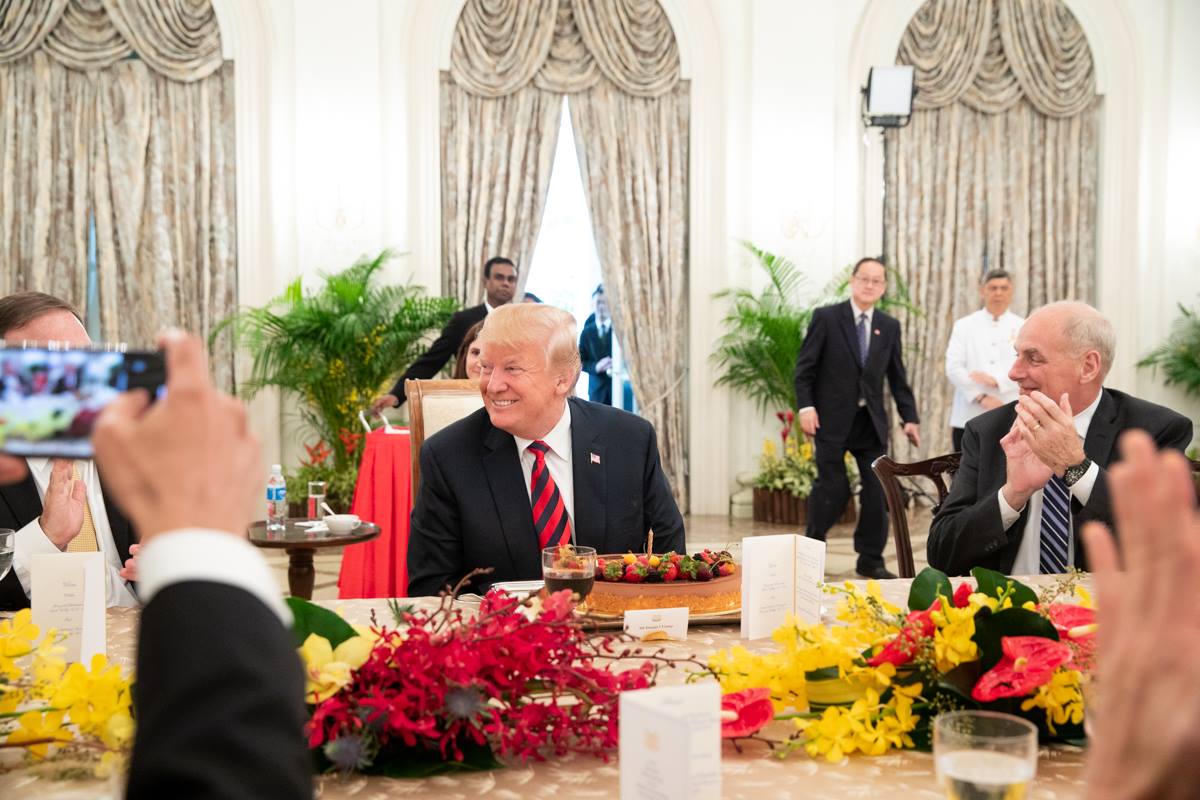 One also observes that Trump generally has a pattern of behavior in which, immediately after meeting with a world leader, he shifts towards highly conciliatory policy towards that world leader. This occurred in the case of China with sudden conciliatory policy towards China following a meeting of Trump with Chinese president Xi Jinping, despite previous months in which relations between China and the US reached a low point.

So, too, with Kim, perhaps. But Trump can also shift back abruptly towards hostility as well, as observed in that after a period of good relations with China immediately following his meeting with Xi, US-China relations has seen both low and highs. And Trump remains altogether unclear regarding whether he intended to take stronger action against China in the Asia-Pacific through military—such as, for example, warning China away from Taiwan by sending an aircraft carrier through the Taiwan Straits—or would seek to withdraw American troops from the Asia Pacific, as he suggested early in his administration, and as he seems to have suggested again today.

And so, much remains uncertain about what will take place gong forward. Apart from broader questions regarding whether North Korea intends to commit to denuclearization in earnest— which really were to be expected—much depends on the uncertain nature of what actions by Donald Trump will be going forward. At best, we can say that this is a “known unknown.”