Tempest In A Teapot Regarding AIT Move

THE OPENING OF the new American Institute in Taiwan complex (AIT) in Neihu was largely a non-event today, overshadowed as it was by the Trump-Kim summit that took place concurrently in Singapore. Among those present was Taiwanese president Tsai Ing-Wen, who spoke about historical US-Taiwan ties, and other high-level policymakers. But it does well to keep in mind that, despite the large amount of attention focused on the building move, the move signals little about any shift in American policy on Taiwan.

AIT is the representative office of America in Taiwan. In the absence of official diplomatic ties, America does not have an embassy in Taiwan, as a result of which AIT serves in lieu of an embassy. AIT’s offices in Neihu will replace their current offices in Daan. 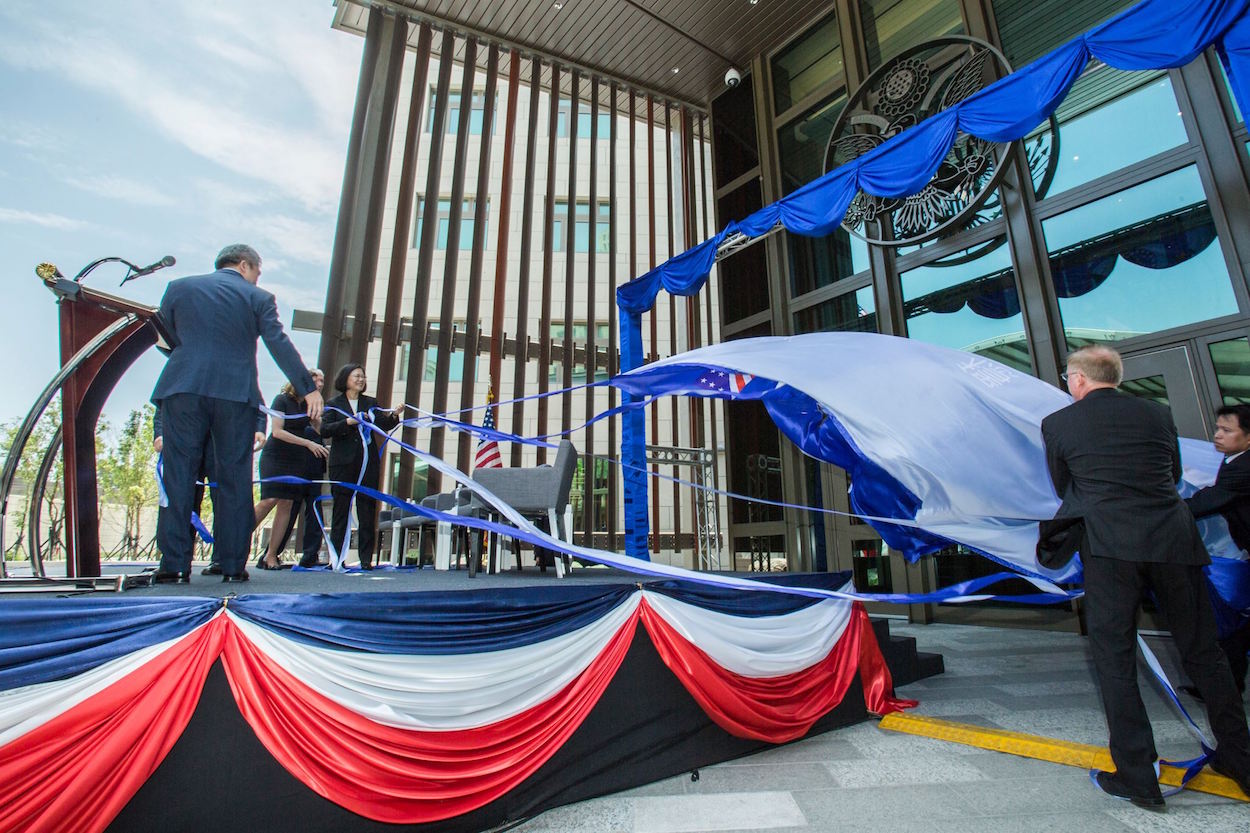 Although ahead of time, news media suggested that the move was liable to provoke Beijing, in reality this was to vest a routine move with undue significance. Significance was attributed to the fact that the building cost 255 million USD and much speculation ensued about whether the Trump administration would send a senior official to attend the opening of AIT.

But in reality, the AIT building move had been planned and discussed for years, given overcrowding in AIT’s current aging facilities in Daan. It is simply that the date of the move ended up falling during a period of high tensions between America and China and that the Trump negotiation had suggested in the past that it might be willing to rethink American One China policy.

If there had been no Trump-Tsai phone call, very likely less attention would have been paid by western media to the move. On the other hand, while harsh invectives would have followed from Chinese state-run media, China reacts in disproportionate terms to almost anything. This does not mean what China reacts against is significant in any way.

Yet, much in the same vein, one should not take the move as signaling stronger US-Taiwan ties, as much of Taiwanese media seems to have. In the absence of sending a high-ranking official to Taiwan for the opening, boilerplate talk by American officials and Taiwanese officials praising the historical US-Taiwanese relations is simply just that—boilerplate talk. One could not really expect otherwise at joint US-Taiwan diplomatic events, even during times of poor US-Taiwan relations. Likewise, if the US had genuinely wanted to use the move to signal strengthened ties between the US and Taiwan, it could have possibly rescheduled the opening ceremony to not coincide with the Trump-Kim meeting.

Just another #G7 where other countries expect America will always be their bank. The President made it clear today. No more. (photo by @RegSprecher) pic.twitter.com/emAVNqRqhc

Tweet by Bolton regarding confrontation between Trump and other world leaders at the G7. Bolton is standing directly behind Trump in the photo. Photo credit: Twitter

Much media speculation had previously speculated on whether the Trump administration would send the hawkish National Security Advisor John Bolton, known for his historical support of Taiwan, as well as views favoring confrontation with China—possibly including the possibility of opening up direct military conflict with China in line with historically neoconservative views.

Bolton would have proven a provocative choice. Indeed, Bolton’s ability to ruffle feathers can be observed in that North Korean leader Kim Jong-un tried at one point to suspend negotiations with Donald Trump regarding North Korean disarmament unless Bolton was removed. Bolton is one of Trump’s most trusted advisors, accompanying him to high-level meetings with world leaders such as the G7.

It remains an open question as to whether the Trump administration would have sent Bolton to Taiwan if AIT’s opening had not happened to coincidentally overlap with the Trump-Kim summit. Instead, the Trump administration stuck to safe choices in sending assistant secretary of state Marie Royce, who is notably married to US Congress member Ed Royce, a consistent Republican supporter of Taiwan—still a high-level official and one representing continuity with Republican supporters of Taiwan, but one who would not ruffle too much feathers.

Very probably international diplomatic blowback would have followed if John Bolton had in fact visited Taiwan. Indeed, although many in Taiwan took the view that a Bolton visit would be positive, in signalling the Trump administration’s willingness to confront China over Taiwan. Yet Bolton’s poor international reputation among other western nations, this may not have reflected well on Taiwan, which strives for admittance to the international community on the basis of being a “good citizen” rather than a “rogue state”. 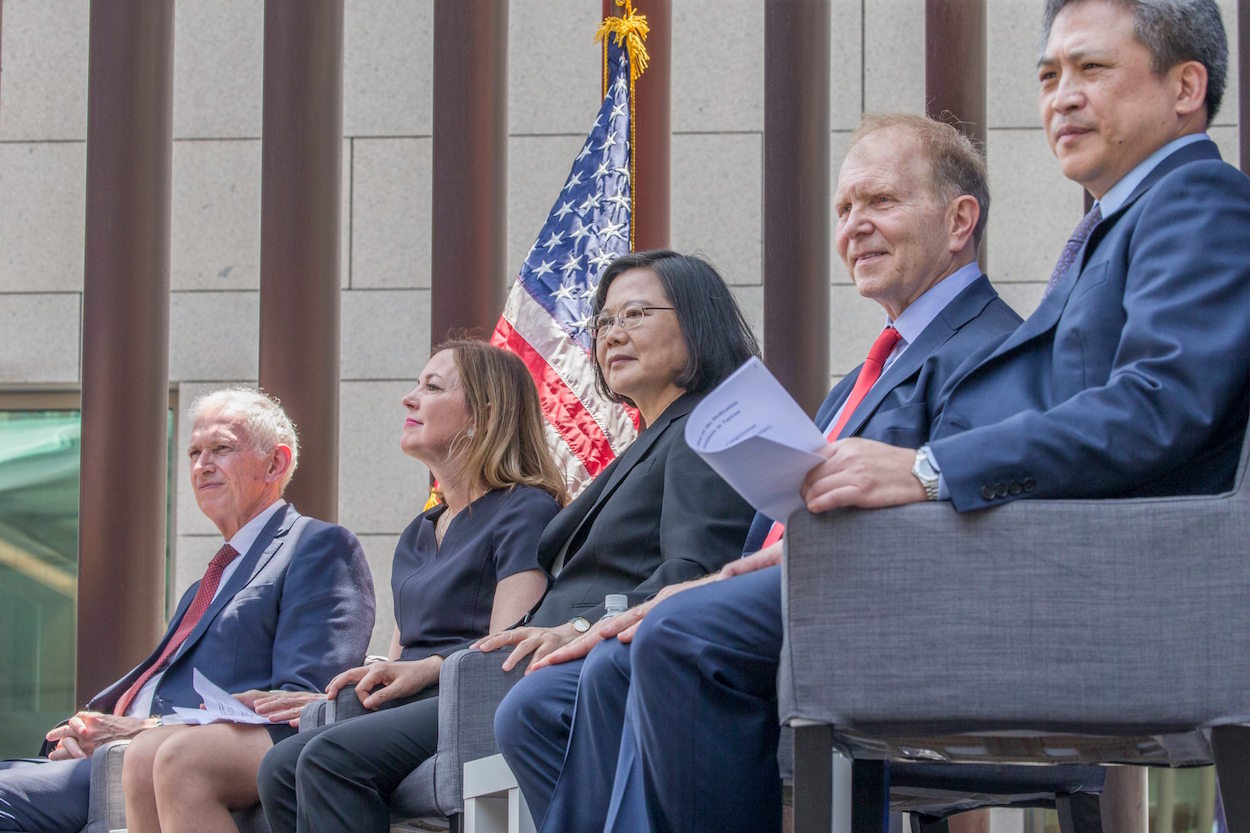 One also does well to note that it was previously a claim in Taiwanese and international media that the stationing of marines in AIT’s new complex signalled a stronger US commitment to Taiwan or could even be something like a US base in Taiwan—Bolton has suggested interest in relocating American bases to Taiwan in spite of that China has stated that it would view this as cause for war, given that China claims Taiwan as part of its integral territory.

But American marines are already present at many of America’s embassies worldwide, simply to provide security. Stationing a small number of marines at AIT hardly constitutes a base either—the ability of a small number of marines in a building in Taipei to ward off Chinese assault would be nil. And it would be mistaken to think that American army personnel are not already present in Taiwan. This, too, simply was an aspect of the AIT story that media focused in on to suggest that the move was more important than it actually was.

And so not much has changed with AIT’s opening in terms of the overall picture of US-Taiwan relations. If shifts in US-Taiwan policy are to occur in the future, this is not a sign of it.