REPORTS THAT the Taiwan Civil Government is being investigated for fraud and scam activity may surprise few. However, it seems unlikely that the underlying ideology of the group will go away anytime soon. After all, vaguely similar conspiracy theories exist all over the world, but the underlying ideology of the Taiwan Civil Government would be one uniquely a product of Taiwan’s unusual geopolitical situation.

Founded in 2008, the Taiwan Civil Government is an organization which claims that America took control of Taiwan in 1946 after its defeat of Japan in World War II, seeing as Japan was controlled Taiwan after China ceded Taiwan to Japan in 1895 through the Treaty of Shimonoseki. According to the Taiwan Civil Government, America entrusted the legal occupation of Taiwan to the ROC following its defeat of Japan in World War II, in the course of which Chiang Kai-Shek stripped the Taiwanese people of their Japanese nationality without American consent. 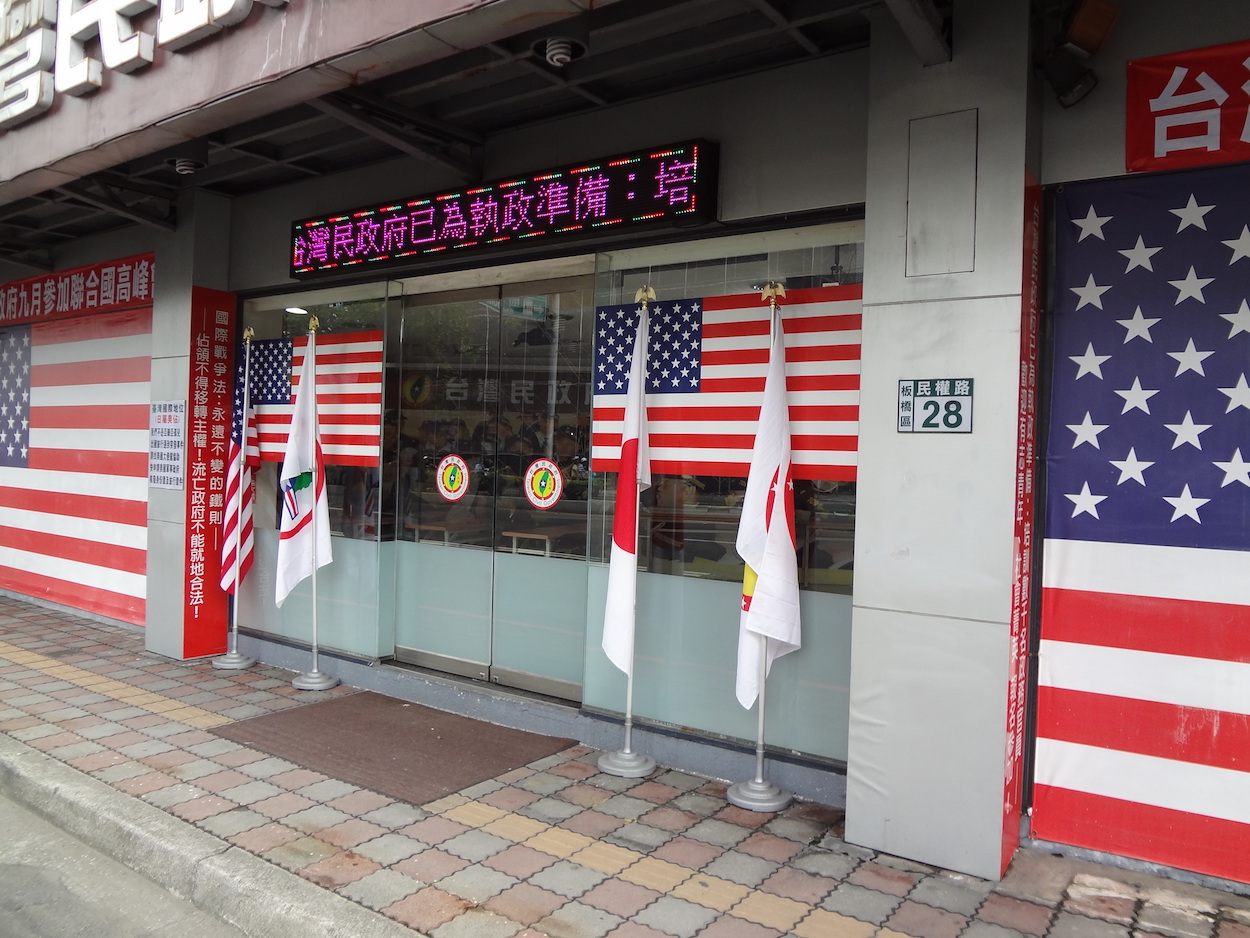 Yet while Japan’s rights to Taiwan were taken away after the Treaty of San Francisco, seeing as no receiving power was specified as receiving ownership of Taiwan, the Taiwan Civil Government claims that this leaves Taiwan in a state of diplomatic limbo in which Taiwanese legally have no nationality and no nation-state, but in which Taiwan technically remains under American military government. The Taiwan Civil Government thus has filed a suit against the United States and the ROC attempting to reverse what it claims was Chiang Kai-Shek stripping Taiwanese of their Japanese citizenship, calling for Taiwan to become part of Japan, and to have loyalty to the Japanese emperor. Nonetheless, at the same time, the Taiwan Civil Government continues to pay a great deal of homage to America.

A number of unsubstantiated rumors that have dogged the organization for years. There are rumors even that the organization is a front for China intended to discredit Taiwanese independence activists, seeing as Chinese nationalists sometimes attempt to discredit Taiwanese independence activists by pointing to their uncritical nostalgia for the Japanese colonial period, or that they secretly long for a return to Japanese colonialism outright.

However, it has generally long been alleged that the Taiwan Civil Government is a scam or a cult, or can be considered one. Apart from that there is an unusual amount of fixation within the group on leader and founder Roger Lin, it has been alleged that the Taiwan Civil Government fleeces members by claiming that it is the only true legitimate legal authority in Taiwan and then charging them exorbitant amounts of money for classes or the ID cards or license plates it issue. Nevertheless, Taiwanese government officials have in the past taken a light hand to the organization, with Minister of the Interior Chen Wei-zen stating that the group had constitutional rights which were to be protected despite the fact that it was an unregistered organization, and police usually not taking against the IDs or license plates issued by the group with the view that these were fairly harmless actions. 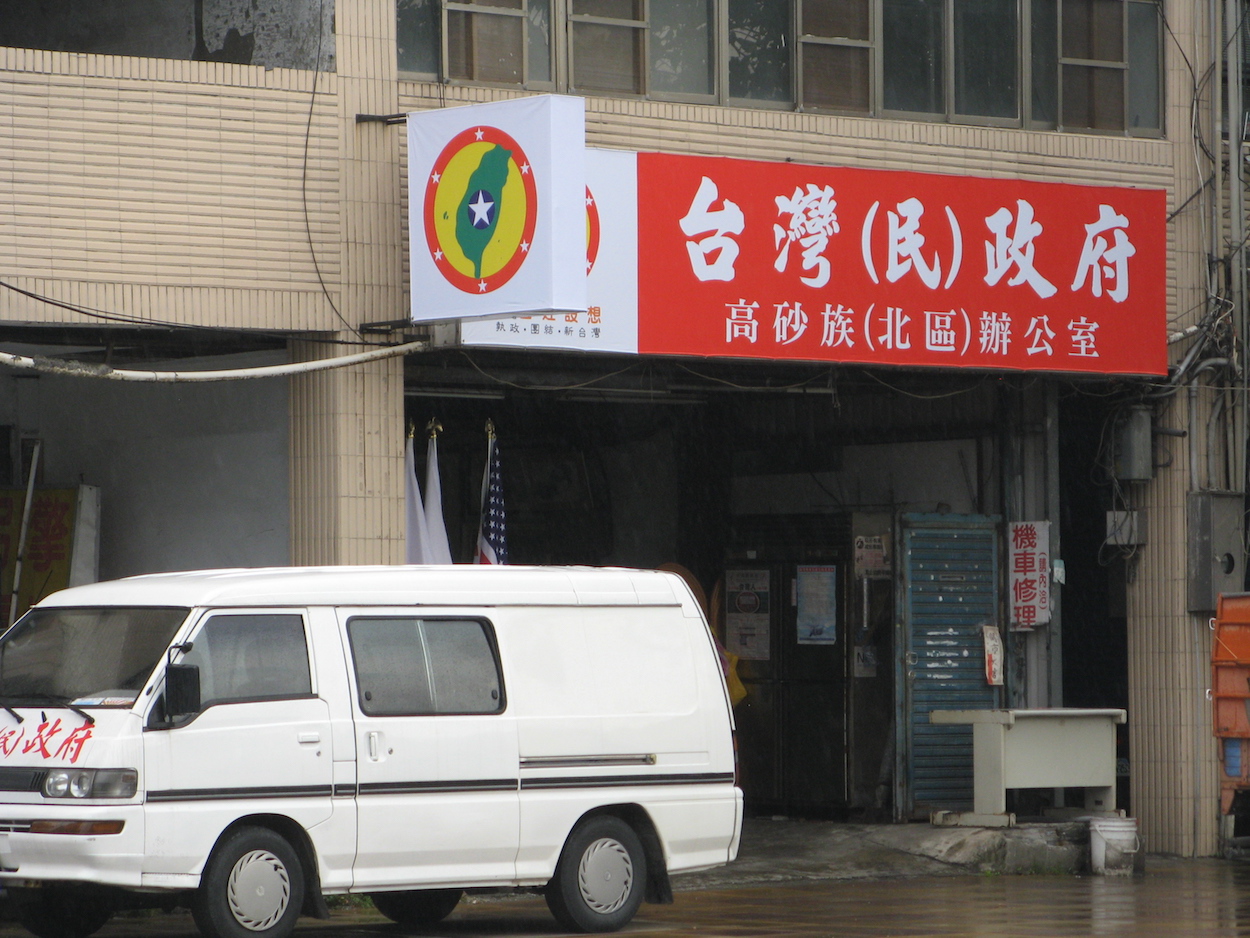 Things may have changed for the group, however, with founder and leader Roger Lin being detained on the orders of the Taoyuan District Court and allegations that the group has made over 300 million NTD in illegal profits, engaged in money laundering, as well as carried out fraud through its spurious claims, including claims that members had obtained American residency. 130 million NTD in cash alone was reportedly found in Lin’s home. Given the fact that the Taiwan Civil Government had offices all across Taiwan despite only being founded for ten years, this suggested that the organization had a great deal of resources, but the high amount of funds still surprises.

Nevertheless, questions regarding the sincerity of Lin’s actions aside, including whether he was deliberately scamming members or whether he genuinely believed such ideologies, one notes that it is actually not so surprising that the Taiwan Civil Government’s ideologies would gain such widespread traction.

A number of conspiracy theories worldwide make claims to knowledge of hidden juridical truths. One observes sharp parallels between the Taiwan Civil Government and the sovereign citizen movement, for example, members of the sovereign citizen movement believe that there are secretly two classes of Americans, “States citizens” and “US citizens”, and maintain that the present American government is illegitimate.

Similarly, historical revisionist conspiracy theories can also be found worldwide, riffing off of selective interpretations of historical treaties. Members of the Reichsbürgerbewegung movement (Reich Citizens’ Movement) claim that Germany still legally exists as the pre-World War I Reich and that they are still citizens of this German Reich. 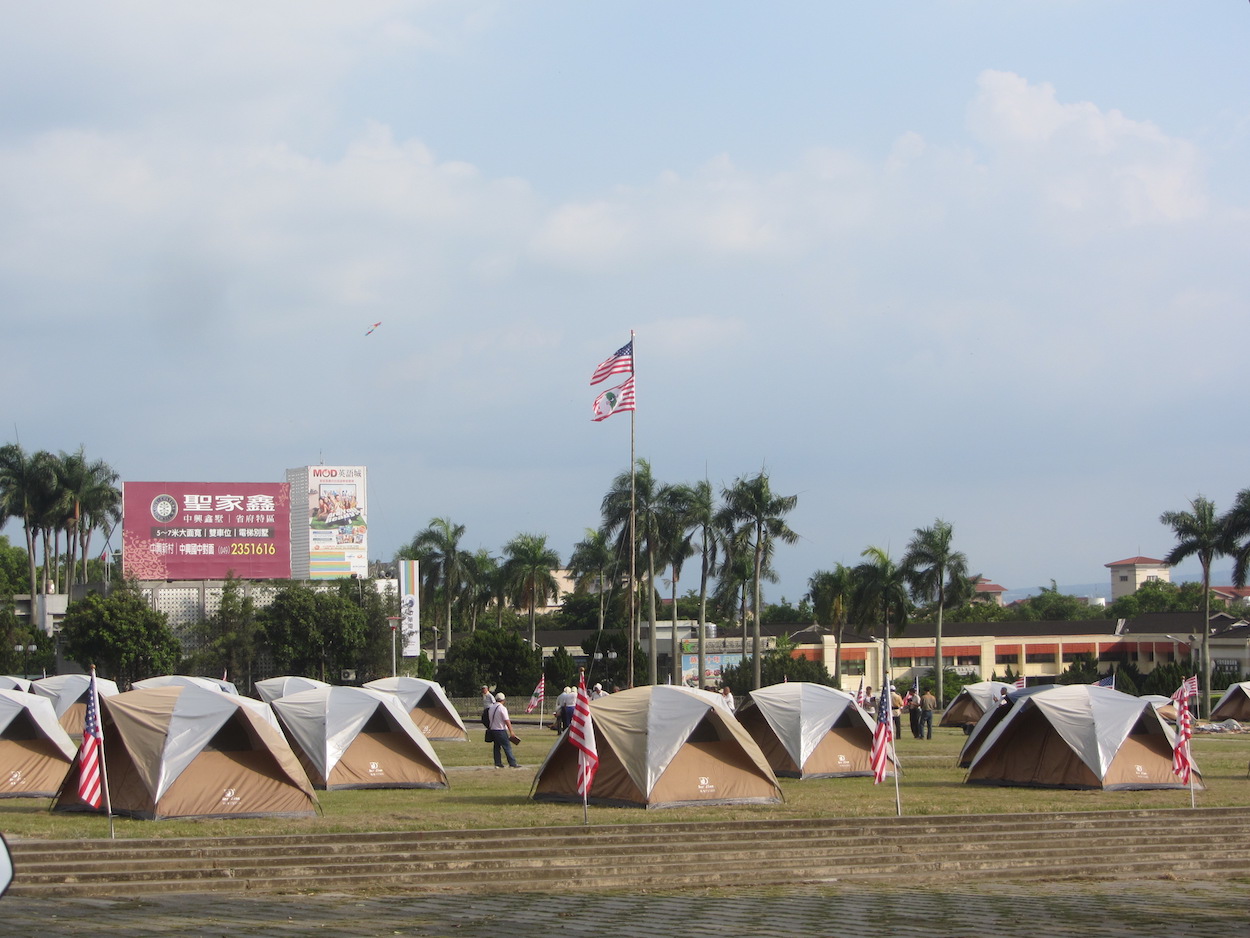 Occupation held by members of the Taiwan Civil Government outside of the Taiwan Provincial Office. Photo credit: SSR2000/WikiCommons/CC

Such conspiracy theories can gain surprisingly large social traction. In 2010, the Southern Poverty Law Center estimated that there may be over 100,000 hardcore believers in the sovereign citizen movement in the United States. Germany’s intelligence agency, the Federal Office for the Protection of the Constitution estimated that there are over 18,000 members of the Reichsbürgerbewegung movement.

Oftentimes, such conspiracy have their origins in various nationalist politics, as observed in the origin of the sovereign citizen movement in American white supremacy and the Reichsbürgerbewegung movement in right-wing German nationalism.

Usually, they are based on fragmentary, partial truths, as observed in the fact that the claim that Taiwan actually remains under American military government can be argued out legally, on a hypothetical basis. But, as the jurist Carl Schmitt argued, seeing as law is fundamentally situational in nature, this legal argument remains unlikely to come into play anytime soon, given international geopolitics. It is politics which determines law, not vice-versa.

In comparison with such examples drawn from the international world, it may not be surprising that the Taiwan Civil Government could grow to its reported size, then. Likewise, one notes that Taiwan is a society plagued by a large number of cults, many of which are religious. 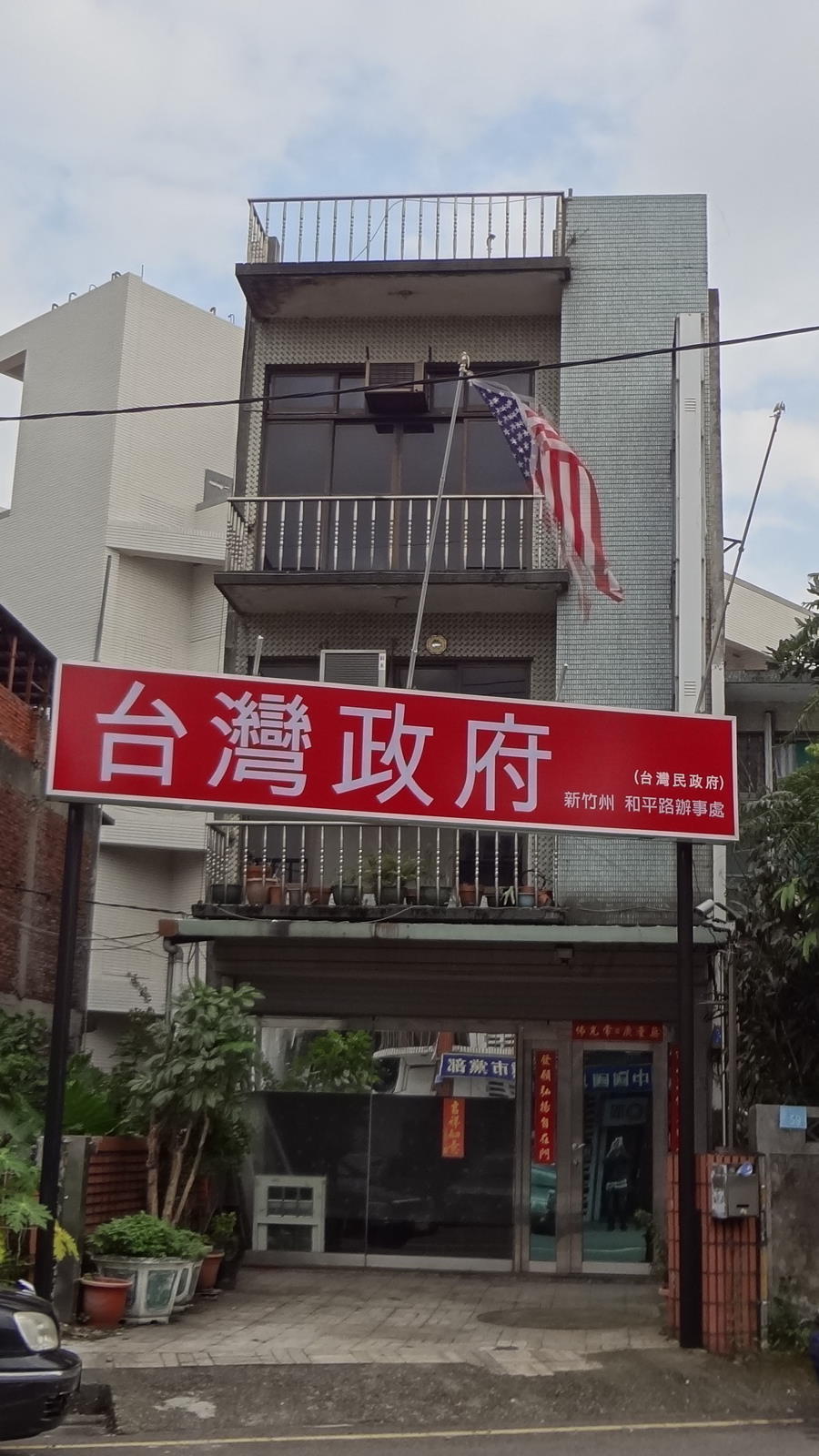 However, in terms of conspiracy theory-based groups which claim knowledge of hidden truths, one may suggest that in Weberian terms, they may be a reaction to juridical modernity, in which all humans are subject to bodies of laws too complex for laymen to understand—and even then, even for experts, the vast corpora of laws which exist internationally are too much for any single individual to understand. This would be what Georg Lukacs also described in terms of the fragmentation of knowledge which occurs in modernity as a result of the vast specialization of knowledge.

Conspiracy theories which claim knowledge of a juridical order above those of, then, are rooted in this reaction against juridical modernity in individuals attempting to restore agency to themselves by claiming knowledge of a transcendental juridical order. Such knowledge is necessarily occultic and arcane in nature, as pointed to in the work of Umberto Eco.

And so, it is not surprising to see how in terms of this broader phenomenon globally, the Taiwan Civil Government would be a peculiarly Taiwanese example. Yet one could even say that Taiwan is especially suited for such conspiracy theories.

Taiwan’s difficult to understand national status can lead to confusion for even Taiwanese about the status of what is a de facto independent nation but one which lacks de jure recognition, a glaring fundamental contradiction which cuts against the grain of the whole of Taiwanese lived experience. But that this is so leads to a sense of powerlessness for many, perhaps, a sense that Taiwan is constrained by arbitrary, incomprehensible international law—which is not incorrect. 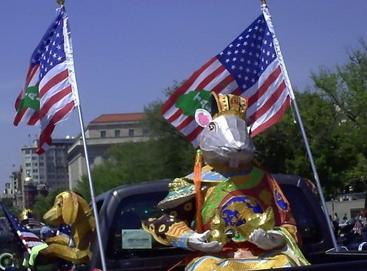 Conspiracy theories as those advanced by the Taiwan Civil Government, then, seem to offer a sense of restoring agency to Taiwanese in claiming an arcane and occultic true legal order which will ultimately resolve the existential threat to Taiwan from China and the powerlessness that many Taiwanese feel in the face of such threats and an international legal order which seems like it will not change anytime soon.

Indeed, although the best known and probably largest of such groups, it is telling that the Taiwan Civil Government is far from the only group which advances bizarre conspiracy theories regarding some claimed true status of Taiwan’s sovereignty. Club 51 (51俱樂部) and other groups that refer to themselves as part of the “Formosan Statehood Movement” (臺灣建州運動) for example, advances a similarly contorted legal argument about the status of Taiwan—although in order to claim that Taiwan is America’s 51st state, rather than part of Japan, as the Taiwan Civil Government does.

And although it is wholly possible that some unscrupulous individuals take advantage of such fears, in this way, the Taiwan Civil Government ultimately proves a manifestation of fear in Taiwanese society regarding the threat China presents to Taiwan’s sovereignty. This would be a telling symptom, but one which ultimately reveals how the conspiratorial thinking that members of the group engage in fundamentally stems from a sense of powerlessness about what seems to be an irrational and arbitrary juridical order which prevails internationally regarding the lives of Taiwanese and a desire to react against it.