WITH OVER 1,000 demonstrating on May 5th to call for implementation of a jury trial system, members of the public continue to attempt to push the Tsai administration towards advocacy for a jury-based system. Previous voting National Congress on Judicial Reform in last August saw a split vote of 7-7 on whether to move towards a jury-based system or a “citizen judge” system.

But demonstrators have proven outraged by suggestions that the DPP may intend to institute a “citizen judge” system, seeing as it is possible that in this system that the opinions of jury members drawn from the public at large could be purely consultatory, seeing as decisions on cases would be made by both professional judges and jury members drawn from the citizenry, but the opinions of three judges could override those of six jury members. This took place after comments by Judicial Yuan president Hsu Zhong-li, with Hsu shrugging off demands by civil society groups to move towards a jury trial system at a hearing. 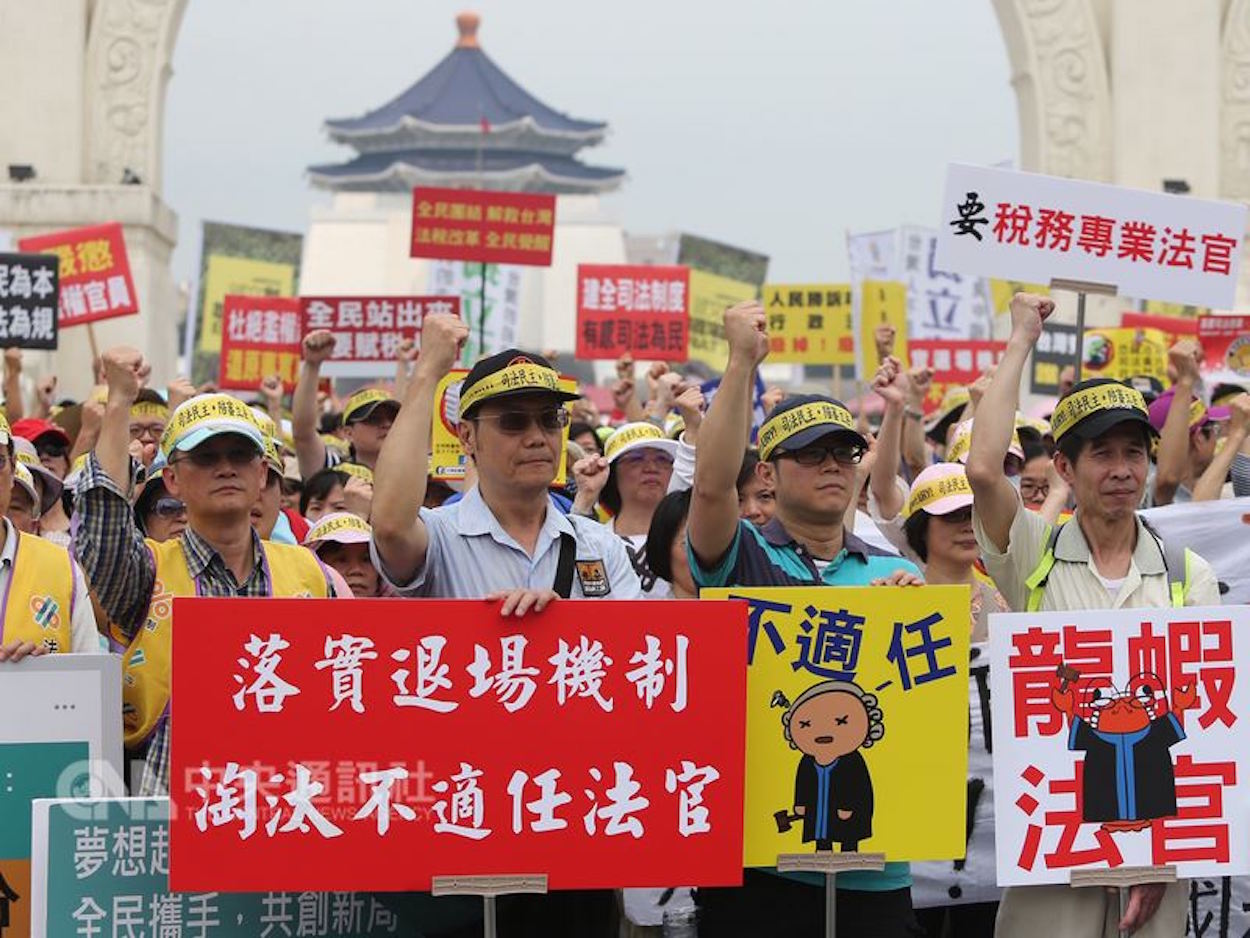 Judicial reform was a campaign promise of the Tsai administration, with suggestions that there was a need to resolve long-standing legal issues and address deeply rooted issues corruption within the judicial system. Yet notably, while calls have been made to move Taiwan towards a jury trial system as exists in America or Britain for decades, with legislation on the issue proposed as early as 1987. But the Tsai administration was deliberately ambiguous as to what stand it would take on the issue, suggesting that it would undertake some kind of reform to include citizen participation, but not completely suggesting that this would be a jury system.

It is, unsurprisingly, provoking of outrage then, that in a “citizen judge” system, the incorporation of citizen jury members could possibly strengthen the power of judges to make political decisions without oversight. Namely, the incorporation of jury members drawn from the citizenry could allow for judges to cite the participation of jury members as a shield for decisions made in an unaccountable manner, by claiming that the public was processurally involved.

Civic groups, then, have claimed that this could strengthen the ability of corrupt “dinosaur judges” appointed during the KMT authoritarian period that remain in power to cover up for their own corruption by colluding with each other. It has long been debated in Taiwan how to address the issue of such “dinosaur judges” who may remain in power and cannot be removed from their posts.

Likewise, civic groups have proven critical of that citizen judge system has prosecutors to present evidence to defense lawyers in three stages—but only after an indictment has been made beforehand. Civic groups claim that this will allow for cases to be dragged on in a manner detrimental to enacting justice. 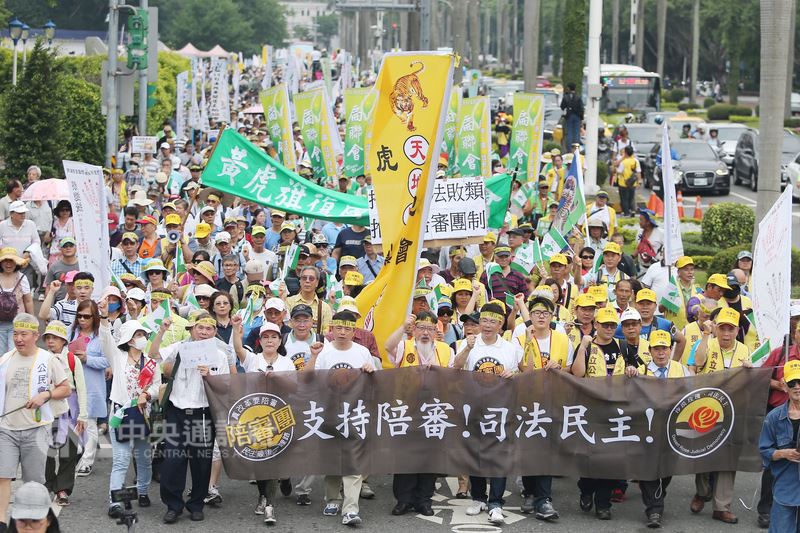 Notably, the call for shifting towards a jury system has historically come from pro-Taiwan civic society groups as the Northern Taiwan Society, Citizen Congress Watch, the Taiwan Citizen Participation Association, Taiwan Forever, Third Force parties such as the New Power Party—some of whose prominent leaders are themselves legal experts—as well as legal groups as the Judicial Reform Foundation and Taiwan Jury Association. Pro-Taiwan groups have long seen KMT “dinosaur judges” as an issue, which is part of why they would push for a jury system.

Elements of the DPP also push for moving towards a jury system. It was historically the demand of the KMT that it preferred something closer to the lines of a “citizen judge” system, likely in order to defend the privileges enjoyed by KMT-affiliated “dinosaur judges.” And so, elements of the DPP see the Tsai administration’s backing away from an outright jury-based system as yet another sign of political backsliding by the Tsai administration once it took office.

Either way, the path to judicial reform may be a long one. Past administrations saw controversy for the arbitrary enforcement of justice, as observed in charges of arbitrary orders for executions by Minister of Justice Luo Ying-Shay with accusations that this may have been to prop up the flagging approval of the Ma administration by ordering the execution of hated public figures, such as subway killer Cheng Chieh, who had a high probability of mental illness. The present administration has not always proven better with, for example, with actions such as those of Minister of Justice Chiu Tai-san, who argued against gay marriage in the Constitutional Court of the Judicial Yuan by appealing to a vague 5,000 years of Chinese history.

Yet while a jury system could balance out such actions by irresponsible government officials, a jury based system is still fallible—the Taiwanese public itself sometimes proves too easily moved to emotional outbursts against hated public individuals such as Cheng Chieh and it is possible that a jury system of citizens drawn from the public may not always rule in a just manner, but one guided more by emotions. This may simply be an inherent danger of democracy, however, inclusive of jury systems. In the meantime, it may also remain to clarify what a jury based system would consist of, such as what criteria upon which jurors would be chosen and how they will be chosen, and what measures should be taken for employers when their employees are called on for jury duty. 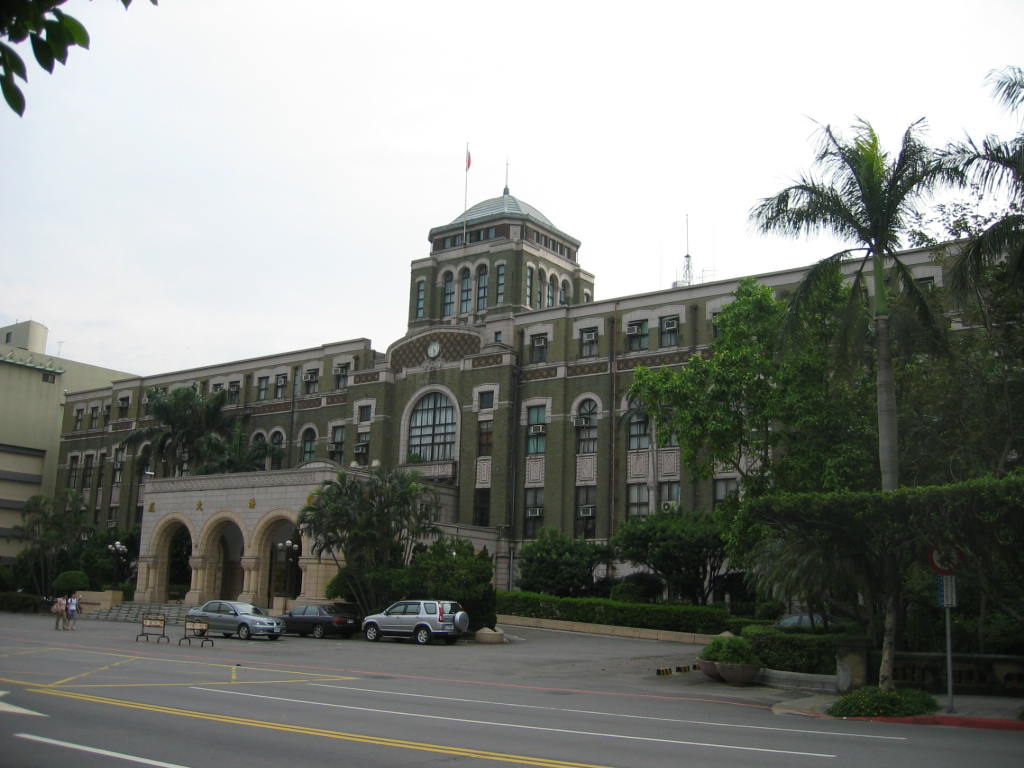 But it may require further action by civil society groups in order to stir the Tsai administration to action. Seeing as public debate over whether Taiwan should move towards a jury system has persisted for so long, without any new wave of public momentum, this debate may continue to remain unresolved.