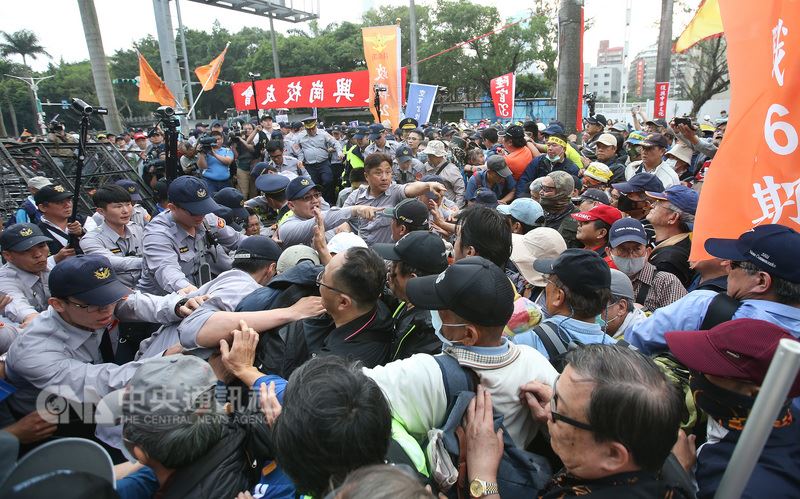 Clashes between police and members of the “800 Soldiers.” Photo credit: CNA

While two journalists and four police officers were also injured during protests Monday, what has been shocking and outraging has been the deliberate targeting of journalists by members of the “800 Soldiers” yesterday, with journalists beaten, sprayed with pepper spray, and their equipment destroyed. Members of the “800 Soldiers” also attacked news vans regardless of their political affiliation, attacking SNG vans including the Central News Agency, Taiwan People News, Apple Daily, Formosa Television, NextTV, EBC, Sanlih, Chungtien, and NewTalk, and attempting to cut their wires.

As a result, of these attacks on journalists, press unions including the Liberty Times Union, Apple Daily Union, and Taiwan Media Workers’ Union have issued condemnations. Members of the “800 Soldiers” also disrupted the entrance of the National Taiwan University Children’s Hospital during their demonstration, with concerns that they would try to block it.

This would not be the first time that members of the “800 Soldiers” have proven willing to use violence, as observed in previous attacks on the neighboring occupation encampment of the pro-independence Free Taiwan Party/Alliance of Referendum for Taiwan (FTP/ART), which maintained an occupation outside the Legislative Yuan for close to a decade. A physical attack on the FTP/ART’s chair Tsay Ting-Kuei took place shortly afterwards in March. However, Taiwanese police has generally taken a lax hand with them, with some accusing the police of being secretly sympathetic to the “800 Soldiers” because police are among those that stand to be affected by pension reforms. 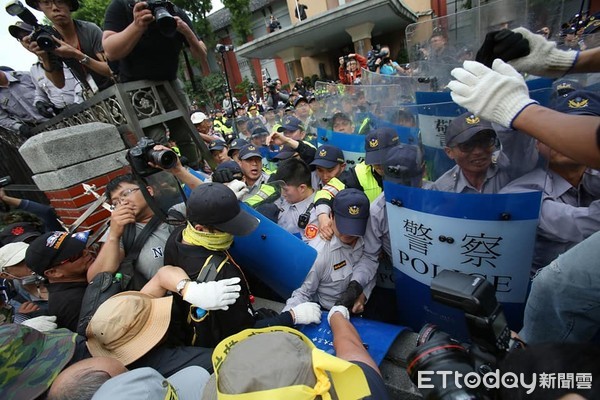 Journalists backed into a corner by members of the “800 Soldiers.” Photo credit: ETToday

Namely, the KMT paid generous pensions to retired members of the military, police, public servants, and teachers as a reward for political loyalty during Taiwan’s authoritarian era. The Tsai administration currently intends to scale back these pensions in order to prevent the Taiwanese pension system from going bankrupt in coming decades, something that will disproportionately affect young people. But despite the fact that they will continue to make more than the average monthly salary through their pensions, this has angered members of the “800 Soldiers”, who see the Tsai administration as failing to give military veterans the due respect they are accorded. Mixed in with their demands is likely a more general sense of outrage against the Tsai administration—one has observed members of the “800 Soldiers” shouting “We are Chinese!” or urging the need to combat the Taiwanese independence efforts of the DPP at rallies.

Nevertheless, it is seems unlikely that members of the “800 Soldiers” will succeed in rallying public support to their side. At a time in which Taiwanese society confronts low salaries, felt quite acutely for young people, but as also true of society as a whole, retired veterans demanding an even larger share of the pie only serves to anger the rest of society. The pro-unification viewpoints of the “800 Soldiers” serve to provoke even further, seeing as retired military officers have sometimes seen fit to visit China to conduct meetings with Chinese government officials, and are accused of leaking military secrets to China during these meetings—yet many of them would still hope to reap the rewards of serving in the ROC military anyway.

Likewise, the use of violence against journalists serves to remind that many in Taiwanese society that these individuals were the former enforcers of KMT during the authoritarian period. As such, members of the “800 Soldiers” are not simply demanding the financial rewards they view as due to them—calling for respect from society is demanding a return to the fear and respect members of the military were accorded in authoritarian times.

Indeed, in response to the actions of the “800 Soldiers”, President Tsai Ing-Wen has stated that the government will not bow in the face of violence. One observes that, while members of the “800 Soldiers” have sought to invade and occupy the Legislative Yuan numerous times, following the broader pattern of pan-Blue social movements attempting to imitate the Sunflower Movement occupation of the Legislative Yuan in 2014 in the hopes that this will similarly allow their demands to gain widespread circulation. 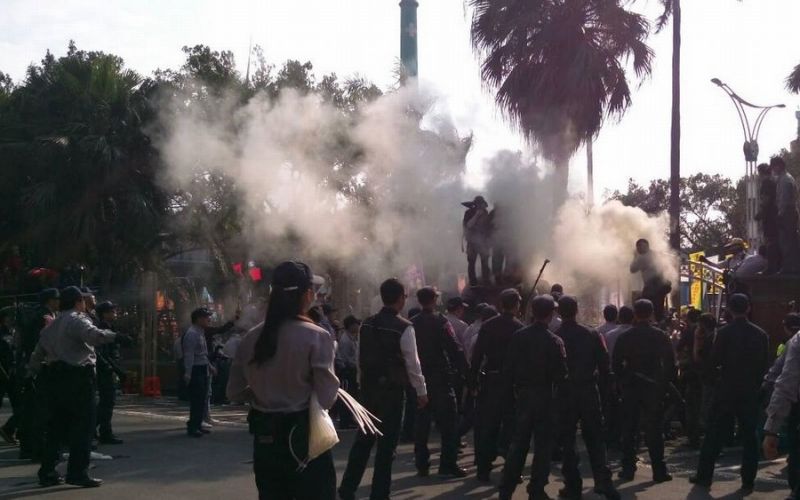 Smoke bombs set off by members of the “800 Soldiers.” Photo credit: BCC

However, one observes the broader lack of public support for military veterans, as observed in an incident in March when a military veteran fell while attempting to scale the Legislative Yuan, and later died of his injuries, but this provoked little social outrage—when similar incidents provoked spontaneous protests involving thousands during the Sunflower Movement, such as the spontaneous protest which broke out on April 11th when ART/FTP head Tsay Ting-Kuei was nearly struck by a bus due to forcible attempts by police to clear the occupation site. There does seem to be a world of difference between the actions of young people willing undertake self-sacrificing actions for the future of Taiwan and the actions of the geriatric advocating for their own privileges.

In the meantime, seeing as the KMT has made a strong stance in support of military veterans’ demands, this may ultimately backfire for the party. The KMT would be depending on military veterans as one of the few social groups to unequivocally and unconditionally support the KMT, but military veterans prove a vocal minority whose views do not resonate with the rest of society and, in fact, probably alienate Taiwanese society as a whole. This may not work out well for the KMT in 2018 local elections.