ELECTORAL POLITICS in 2018 local elections and beyond stand to be shaken up by the recent formation of the “Formosa Alliance”, which intends to push for reform of the Referendum Act in order to allow for a referendum on amending the name of the nation and settling long-standing issues regarding independence/unification. This referendum push could pose a challenge to the DPP in terms of seizing its traditional base.

Namely, even if unsuccessful, the pan-Green camp will have to pose with the demands made by the Formosa Alliance going forward because it includes not only former presidents Lee Teng-Hui and Chen Shui-Bian as well as former DPP presidential candidate Peng Ming-min, but “Third Force” parties which emerged after the Sunflower Movement. As such, all past presidents of Taiwan supportive of Taiwanese independence are onboard with the referendum changes pushed for by the Formosa Alliance.

This could stand to prove a powerful lure for the traditional base of the pan-Green camp. Notably, former president Chen Shui-Bian was the first DPP president of Taiwan, and he still has his supporters within the party. Peng Ming-min, one of the earliest Taiwanese independence advocates, was well known as a political prisoner and exile during the time of KMT authoritarianism. And given Lee’s pivotal role in Taiwanese democratization, one does well to note that urrent president Tsai Ing-Wen, the second DPP president of Taiwan, is a former protege of Lee. Some current DPP members, such as former premier Yu Shyi-kun and Chang Chun-hsiung, who are party heavyweights, have also signed onto the Formosa Alliance.

The fact that respected members of the older generation of the pan-Green camp along with the younger generation are among those pushing for a referendum on Taiwanese independence or actions building up towards such a referendum will serve to undercut the DPP and could draw away elements of its support base. Namely, the DPP has come under fire from its traditional supporters who view the party of have compromised too much, as observed in controversies that broke out after it was proposed that the party remove the Taiwanese independence clause from its party charter—something that would be seen as betraying the original ideals of the party, even if the party has long since drifted away from open Taiwanese independence advocacy. The DPP is also seen as having been less than proactive in terms of attempting to secure a place for Taiwan in international organizations, having instead given up on such efforts. 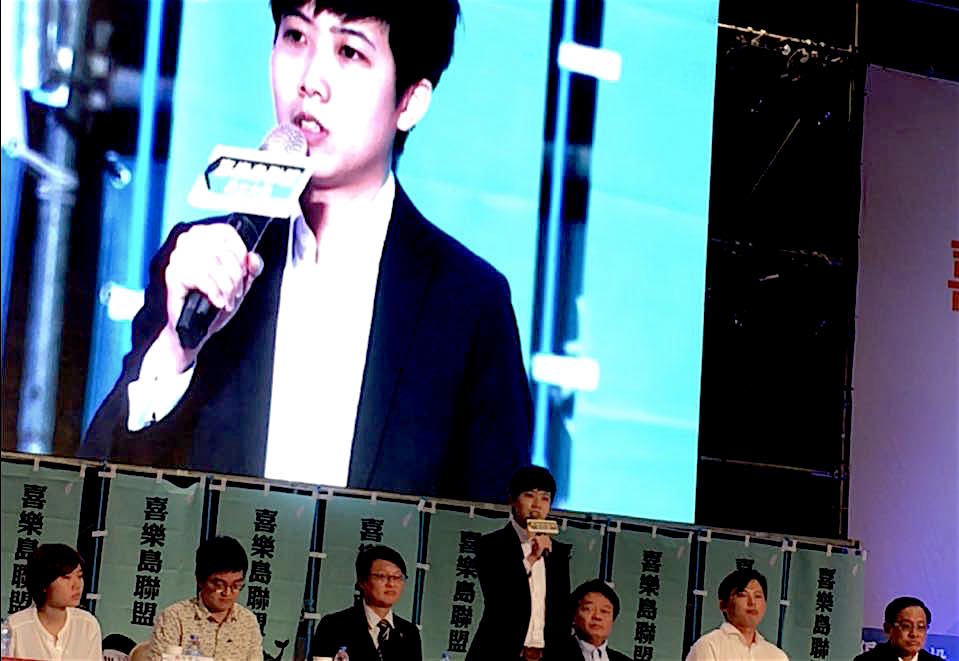 Miao Po-ya of the Social Democratic Party speaking at the opening rally of the Formosa Alliance. Photo credit: Miao Po-ya/Facebook

Very likely the push for greater independence advocacy in the form of a referendum will come from the traditional southern base of the DPP. This was probably the signal that members of the Formosa Alliance hoped to send through holding its convening rally in Kaohsiung, which was attended by Lee Teng-Hui, Peng Ming-min, Yu Shyi-kun, Chang Chun-hsiung, Third Force representatives as Huang Kuo-Chang of the NPP and Miao Po-ya of the SDP, Deng Chu-mei, the daughter of “Nylon” Deng Nan-Jung, and 3,000 supporters. A video recording of a message by Chen Shui-Bian was also played during the rally.

Either way, the challenge to the DPP from the Formosa Alliance is a real one, actually quite irrespective of whether the Formosa Alliance succeeds in its aims or not simply because it undercuts the political credibility of the DPP among traditional supporters of the party. The ball is in the DPP’s court as to whether the DPP’s response to this is to become even more conservative on the issue of Taiwanese independence or to move back towards more open advocacy of Taiwanese independence.