A DEMONSTRATION was held today to mark the one year anniversary of the detention of Taiwanese human rights activist Lee Ming-Che in China. This took the form of a demonstration that began with a series of speeches held outside the Presidential Office Building, which then marched to Taipei Main Station, the Zhongshan MRT station, where an activity to write postcards to Lee Ming-Che were held, and ended in front of the Tsai Jui-yueh Dance Research Institute, where a series of performances were held, and Lee Ming-Che’s wife, Lee Ching-Yu made comments. 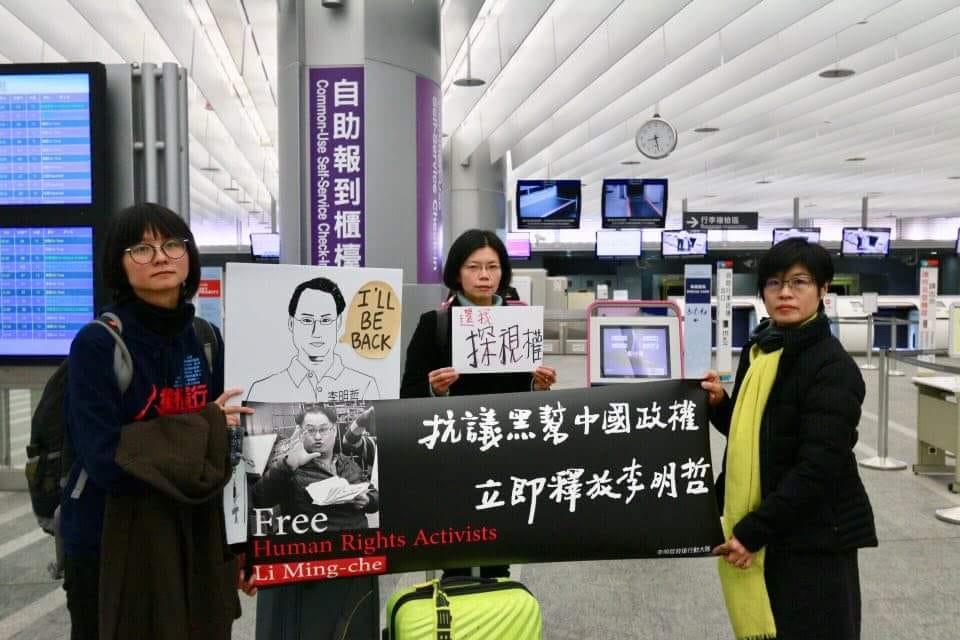 Lee Ching-yu in Taoyuan International Airport during a failed attempt to visit Lee in China in January. Photo credit: 尋找李明哲/Facebook

Lee Ming-Che, a Taiwanese human rights worker, disappeared in March 2017 while crossing into China from Macau. Lee was known to share information on Taiwanese democratization with Chinese friends through WeChat groups, which was the reason for his arrest. The Chinese government initially refused to clarify whether it had detained Lee, but Lee later confessed in court to attempting to subvert state power and encourage multi-party rule in China and was sentenced to five years in prison. It is widely alleged that Lee’s confession of guilt was extracted by force, as in other televised confessions by individuals detained by China.

Nevertheless, the precise reasons for Lee’s detention are still somewhat of a mystery, since it is a question whether Lee was deliberately targeted or caught in the dragnet of a larger operation. China is cautious of what it perceives as foreign threats trying to undermine it from within, seems to view recent uprisings in past years against Chinese rule in Taiwan and Hong Kings as a product of foreign intervention, and so has attempted to crack down on foreign NGO activity in China. Lee would be the first foreign NGO worker detained in China, or this could be a case of China treating Lee, a Taiwanese citizen, as a Chinese one. 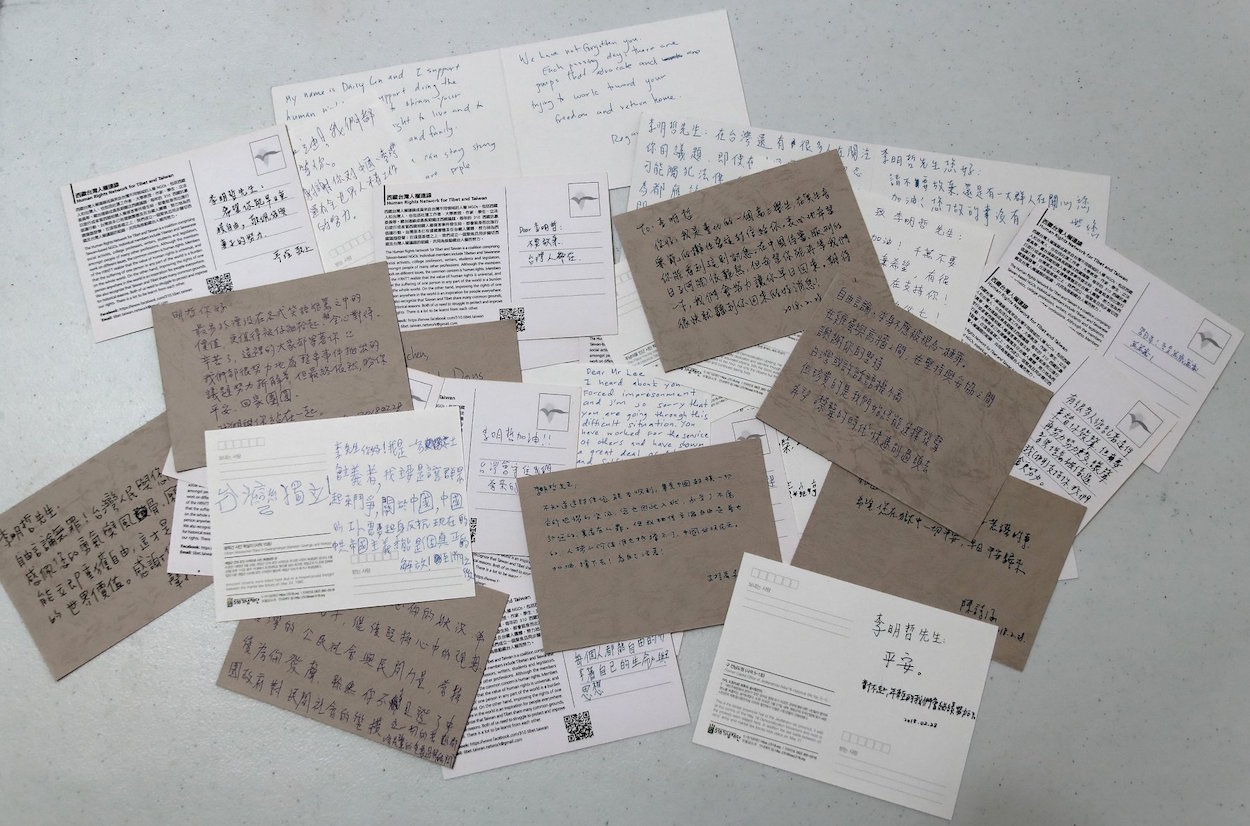 Among the speakers were representatives of Taiwanese civil society organizations, including representatives of the Taiwan Association for Human Rights, Amnesty International Taiwan, Judicial Reform Foundation, Taiwan Forever, Covenants Watch, and other groups among those that made comments. Performances held including having a man dressed in a blindfold and handcuffs march alongside demonstrators, dance performances at the Tsai Jui-yueh Dance Research Institute, and temporary tattoos distributed among demonstrators imitating Lee Ching-yu’s tattoos that she held up during Lee Ming-che’s show trial in China to express pride in her husband. 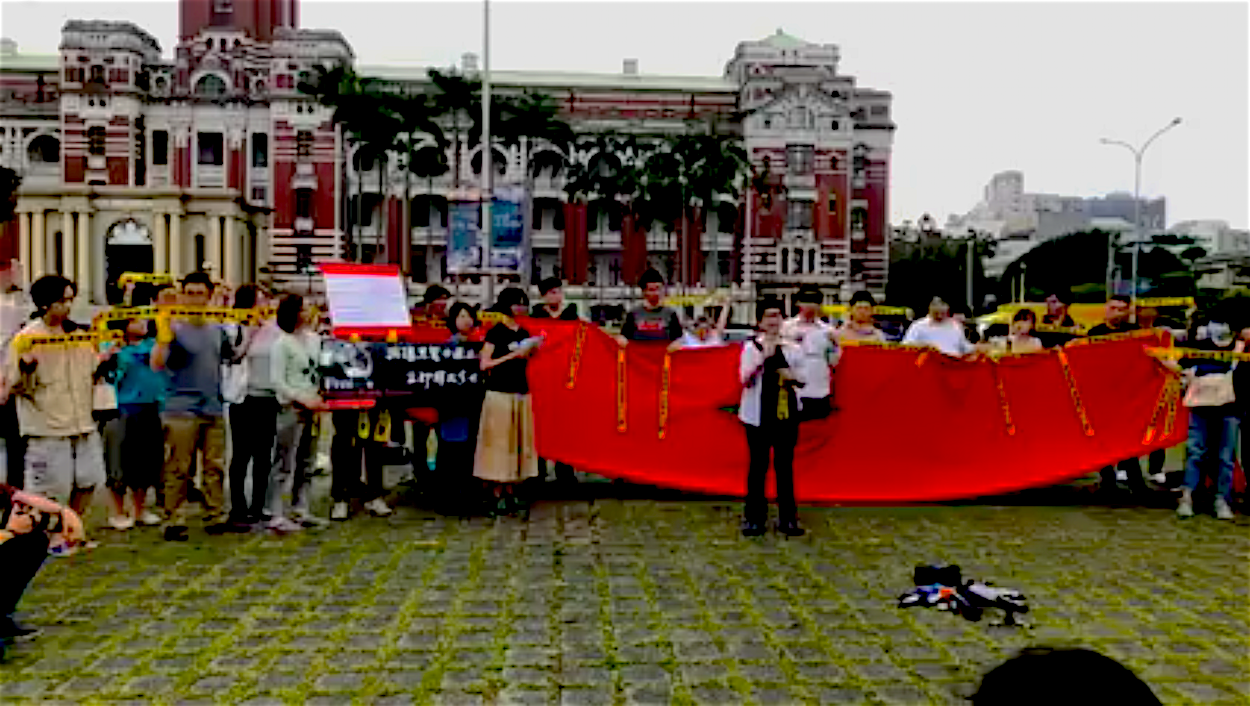 It may be that the Tsai administration hopes that keeping quiet on the issue will lead to a speedy release for Lee, and that making noise on the issue will lead to Lee remaining in detention longer; the policy undertaken by past KMT administrations when it came to issues of cross-strait detentions. There are those, in fact, that lash out at the Lee Ming-Che Support Group and Lee Ching-Yu which was formed after Lee Ming-Che’s kidnapping with the view that they are postponing Lee’s release by not keeping quiet on the issue. 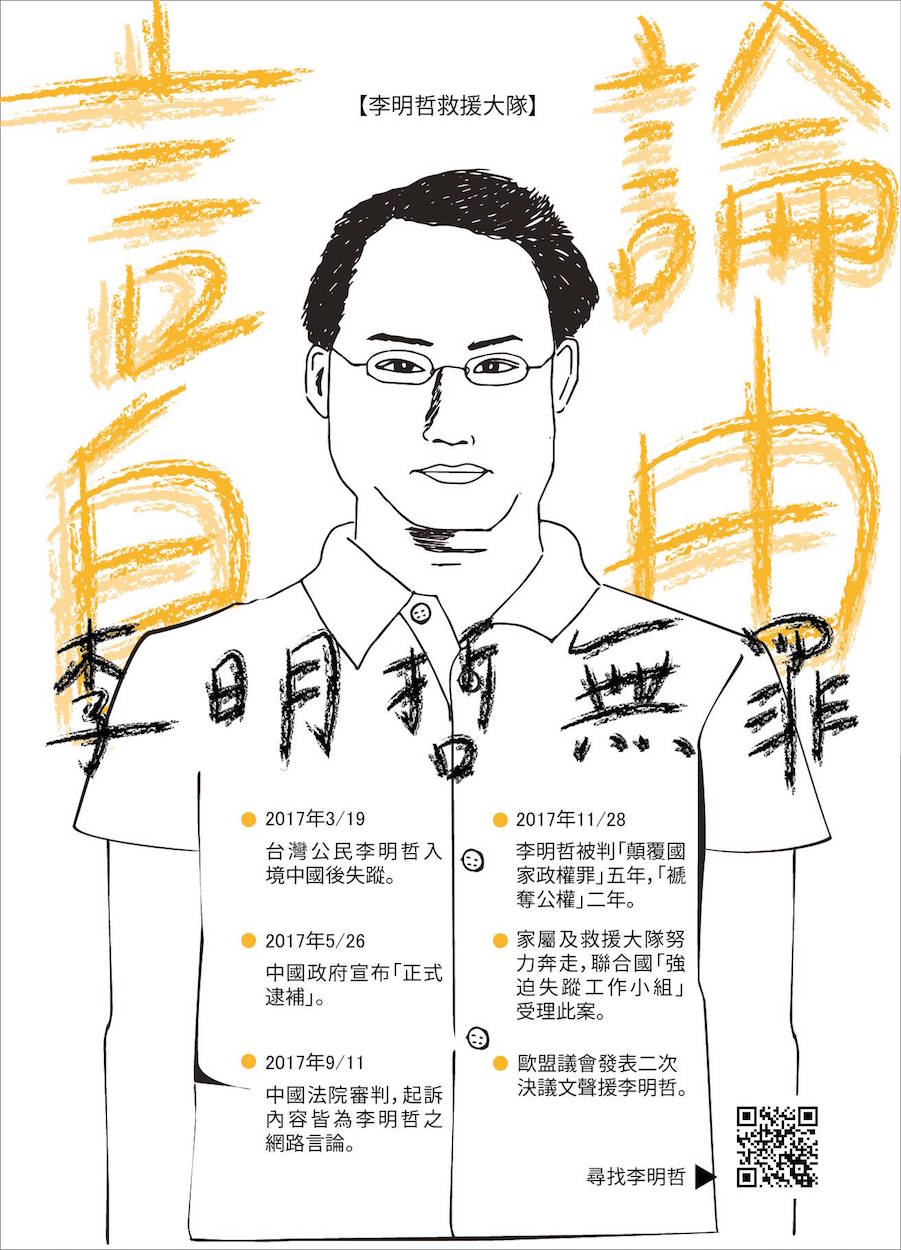 Poster advertising other planned events aimed at calling attention to Lee Ming-che’s plight in the next year. Photo credit: 尋找李明哲/Facebook

It still remains a question as to whether the detention of Lee reflects more aggressive measures that China intends to take towards Taiwan. China has continued to offer incentives to try and win over Taiwan, as in newly announced benefits which would give Taiwanese citizens rights and privileges previously only available to Chinese citizens, but the logical outcome of such efforts to treat Taiwanese as Chinese is more cases like Lee Ming-Che. Along such lines, the Lee Ming-Che case cites that China seems to be making uniform policies to deal with what it perceives as would-be-separatist territories including Taiwan, Hong Kong, and Macau, as observed in the prior precedent of the political kidnappings of Hong Kong booksellers that published tabloid-style books critical of the Chinese government.

In the meantime, it also behooves Taiwan civil society to continue raising awareness of the Lee Ming-Che case. Taiwanese society at large has, in fact, failed to react regarding the case, despite that the case directly reflects what kind of threats that China poses to Taiwan. Similar demonstrations calling for Lee’s release one year ago were, in fact, only attended by several hundred. Taiwanese civil society has raised Lee’s kidnapping in other demonstrations, such as annual Tiananmen Square Massacre commemorations, as well as attempted different innovative means of protest, and sought to appeal to international media. 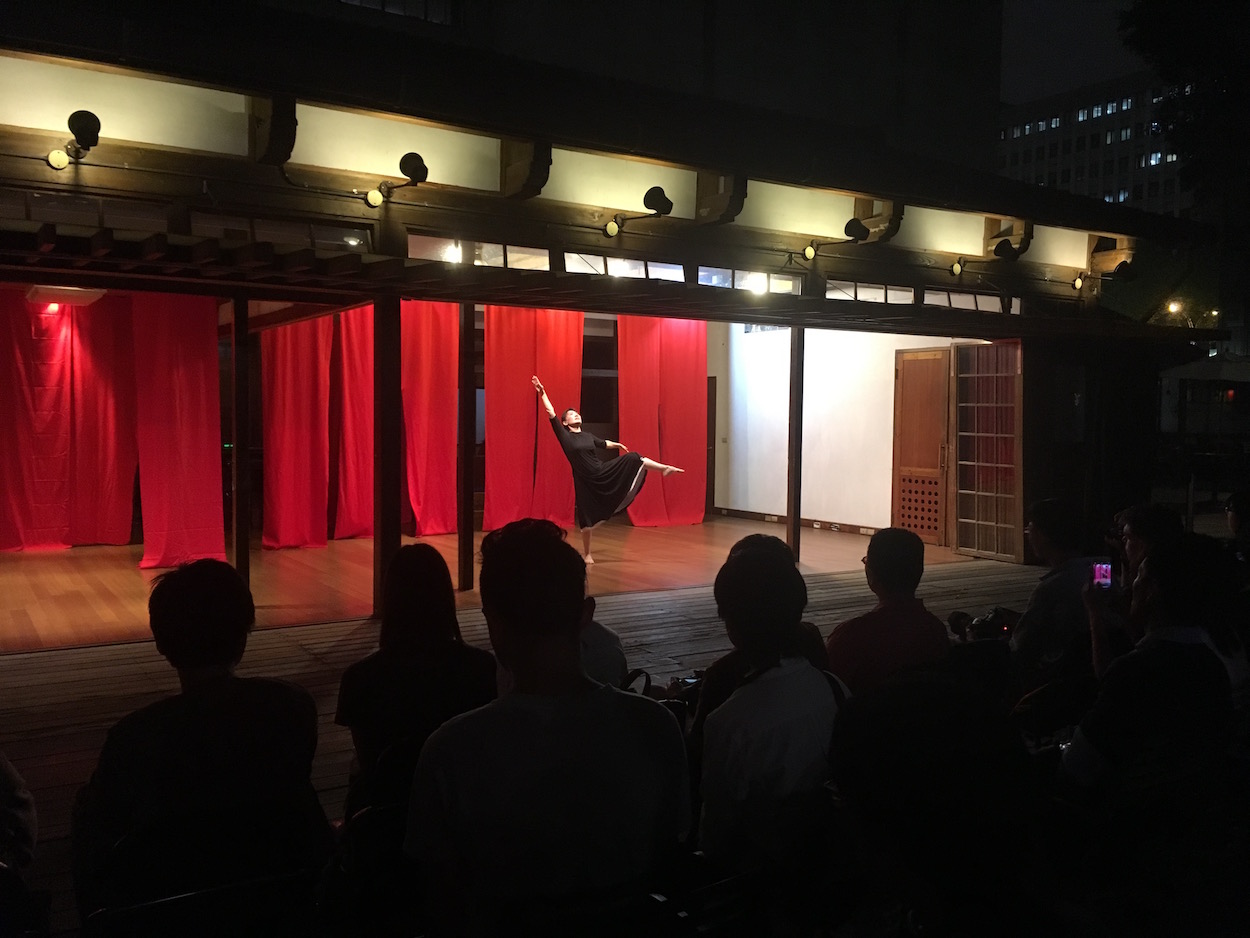 Yet widespread protest for Lee has not broken out. This may be dangerous for Taiwan, seeing that China is watching, and may be emboldened by lack of action by Taiwanese society to conclude that it can step up actions to limit Taiwan’s space in the international world. The claims by demonstrators that “All Taiwanese are Lee Ming-Che” or that there is a need to prevent future “Lee Ming-ches” is not incorrect, insofar as China may conclude that intimidation has proven effective as a strategy where China is concerned and carry out similar actions against Taiwanese citizens. As with the concurrent use of mob violence against critics of China in Taiwan and Hong Kong, China may employ greater levels of violence against those it sees as separatist threats—even if China quite often misunderstands the views of those it targets.

However, for this to take place, keeping the flame alive, and demonstrating that Taiwanese continue to pay attention to Lee’s kidnapping—regardless of how many are present—is vital.