CHARGES FILED against youth activists from a pro-independence group for throwing red paint onto the sarcophagus of Chiang Kai-Shek in the Cihu Mausoleum, accusations of Internet censorship, attacks by pro-unfication activists on the longstanding occupation of the Alliance of Referendum for Taiwan (ART)/Free Taiwan Party (FTP) outside the Legislative Yuan, and a physical attack by pro-unification activists on Tsay Ting-Kuei of the ART/FTP have provoked outrage from youth activists.

The bodies of Chiang Kai-Shek and Chiang Ching-Kuo are entombed in two black marble sarcophaguses in Cihu, where they are on public display. The preserved bodies of both Chiangs were formerly displayed, much in the manner of the preserved bodies of Mao Zedong, Joseph Stalin, Vladimir Lenin, and Ho Chi Minh, among others. 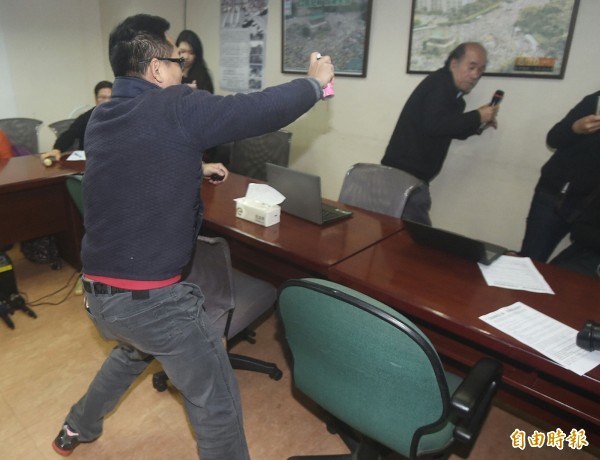 The Chiang mausoleums are located in close proximity to the public park filled with Chiang Kai-Shek statues from all over Taiwan known as the “Valley of the Chiangs.” Despite the perception in international media that Chiang Kai-Shek statues were relocated to this part as a transitional justice measure, in reality, this was more likely an attempt to preserve such statues by New Taipei City mayor Eric Chu, a stalwart member of the KMT.

Activists threw red paint onto Chiang’s coffin then held up a banner calling for the establishment of an independent Taiwan on 228 commemoratons this year, taking advantage of a change in shifts by the mausoleum guards, before being dragged away from police. Activists facing charges numbered 11 in number, consisting of six men and five women, most of which were students. During a court summons, ten of these activists did not appear in court.

What has been outraging of activists, however, has also been the high bail amounts set for activists facing charges. Seven activists were made to pay 50,000 NT for bail, with a bail amount of 80,000 NT originally sought for an activist that filmed the events, and two were made to pay 30,000 NT. In particular, members of the public have been angered by that young students face such steep bail charges, as though they had committed violent crimes.

Activists were primarily members of the pro-independence group, From Ethnos to Nation (FETN), a fairly recently founded pro-independence group responsible for many incidents of direct action against Chiang Kai-Shek statues in the past year, including decapitating statues or splashing statues with red paint. Among participants would also be former representatives of the NTU Student Congress and a former NTU student association president. FETN has close relations with existing Taiwanese independence groups, such as the Free Taiwan Party. This would, however, be the first time in Taiwanese history that pro-independence activists have taken action against Chiang Kai-Shek’s mausoleum.

Video of KMT members defacing the Alliance of Referendum for Taiwan’s occupation tent outside the Legislative Yuan. While the original video was eventually removed from the ROC Blue Power page, it was reposted by Sunflower Movement activist Wang Yikai. Film credit: 藍色力量/Facebook

More generally, the mausoleums point to the special status of the Chiangs as former dictators of Taiwan. The Chiangs are the only deceased presidents of the ROC after the ROC was brought to Taiwan by the KMT, but it seems unlikely that when Lee Teng-Hui dies, that he will be built a similarly grand mausoleum in which his body is put on permanent display under permanent military guard.

Unsurprisingly, there will be those who complain that throwing paint onto the Chiang mausoleums is disrespectful to members of the pan-Blue camp. But one should perhaps keep in mind that during the rule of the Chiangs, the KMT had no problem with leaving the defiled corpses of dangwai dissidents or members of the democratic movement in public areas, as occurred with the corpse of Chen Wen-Cheng, which was left on the campus of National Taiwan University as a warning to other political dissidents. The KMT also had no issue with even killing children or the elderly as a political warning for dissidents, as observed in the murder of Lin Yi-Hsiung’s two seven-year-old children and elderly mother in 1980. 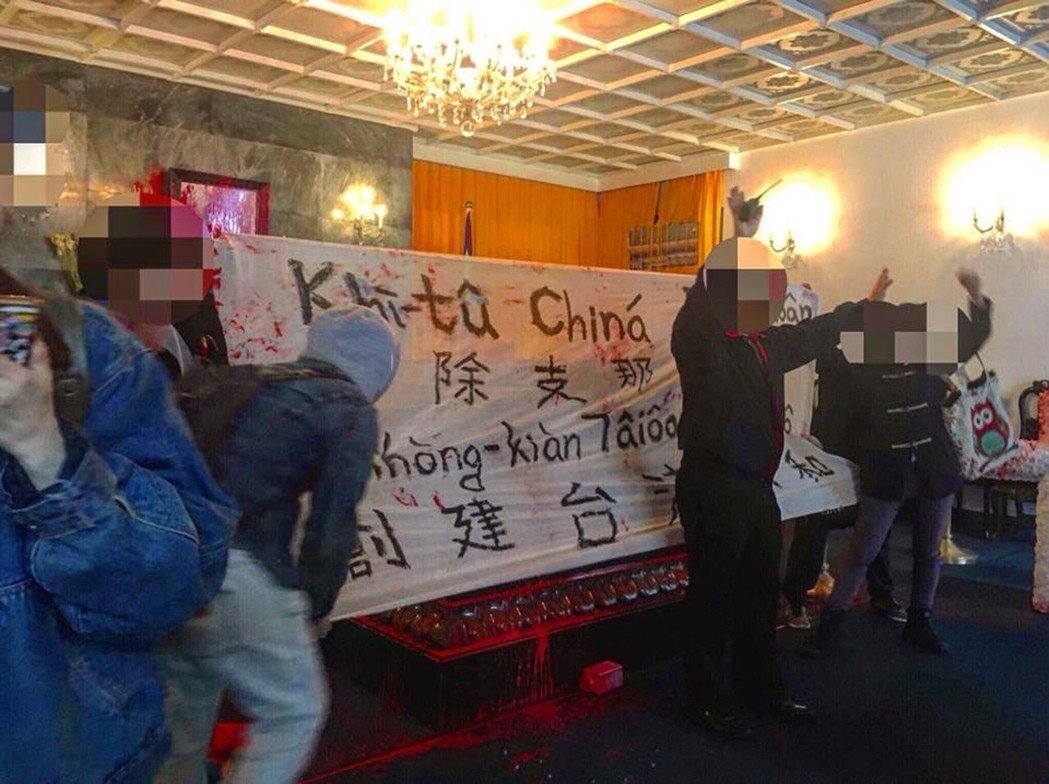 Defacing of Chiang Kai-Shek’s sarcophagus by members of From Ethnos to Nation. Photo credit: CNA

And so complaining that red paint was thrown onto Chiang Kai-Shek’s coffin seems to miss the forest for the trees, when Chiang evidently had no issue with far worse actions taking place against the dead bodies of the political dissidents whose deaths he had ordered. But, indeed, it is not surprising that historical memory is short for some, allowing for a false form of moral equivalency to be drawn, and condemnations of the actions of youth activists as wrong. Throwing paint onto the sarcophagus, furthermore, is fundamentally a non-violent means of protest.

On the other hand, while retaliation by pro-unification forces was expected, this has still proven shocking in terms of physical violence. Splashing red paint onto the Japan-Taiwan Exchange Association in similar manner to the Chiang defacing, ostensibly in protest over fishing disputes between Taiwan and Japan, may be a way of attempting to lash out at Japan for the Japanese colonial period. But attacks on the long-standing occupation of the ART outside the Legislative Yuan which also involved splashing red paint onto the tent, and may also have been aimed at retribution for the mausoleum defacement in some form.

Furthermore, concerns have been raised regarding that Facebook pages of Taiwanese student activists and student groups were suspended for posting about their involvement in the mausoleum defacement incident. This occurred to activists including Hung Chung-yen and Chou An-lu. Reportedly, the NTU Student Congress Facebook fanpage was suspended from posting after posting a statement condemning the heavy fines faced by student protestors, informed that its post violated Facebook’s community standards, and told that the post would have to be deleted, otherwise the NTU Student Congress fanpage as a whole would be deleted.

Given that it has been an aspiration of Facebook president Mark Zuckerberg to enter the Chinese market for some time, some perceive Chinese influence at work behind these bans. It is indeed unusual for Facebook to threaten suspensions or bans for posting press releases in such a manner, particularly for the fanpage of the NTU Student Congress. 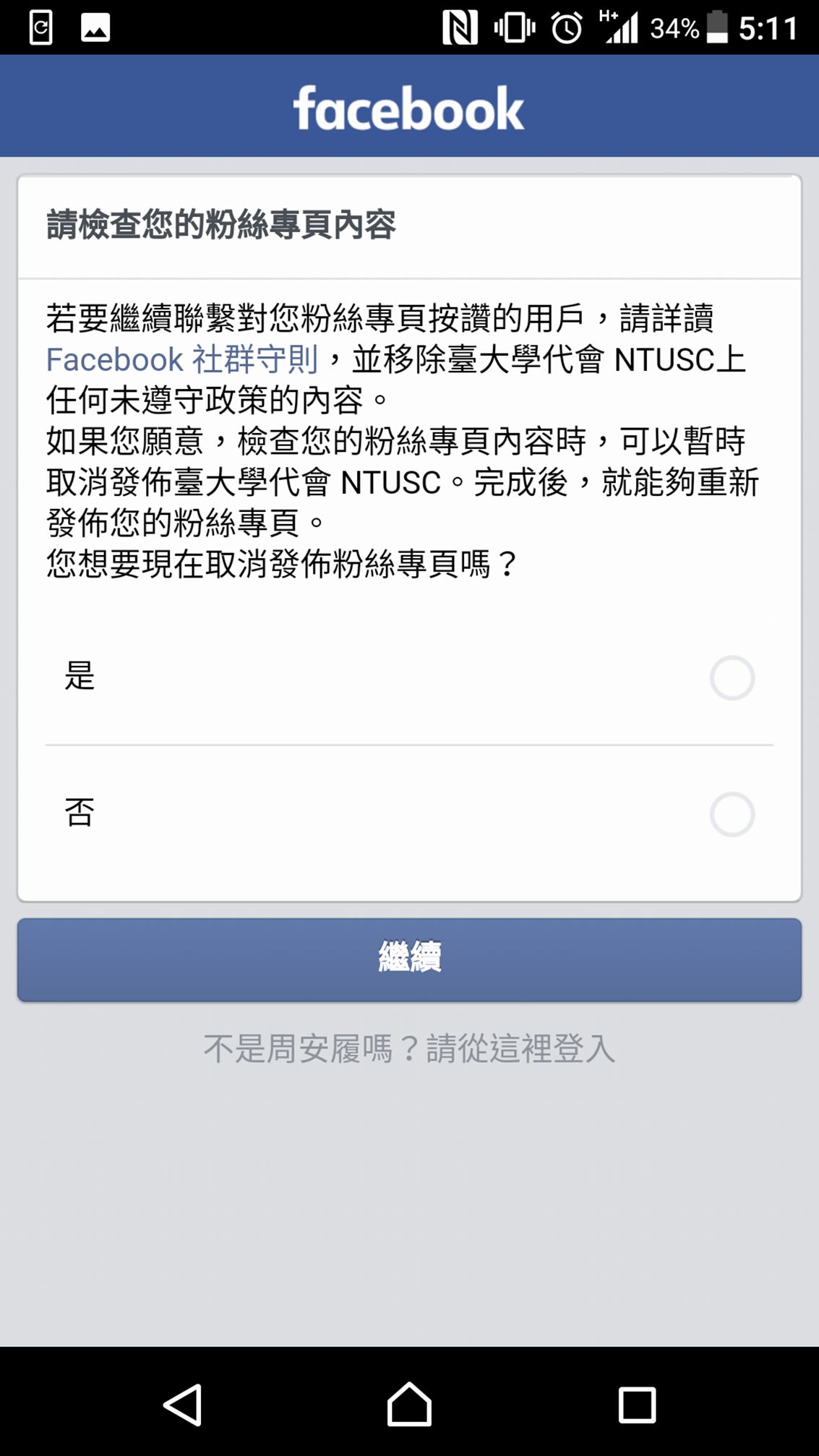 Either way, one expects controversy to continue in the aftermath of the incident. But seeing as many unresolved issues of Taiwanese history which continue to be at stake were raised in the incident, that should not be surprising.