COMMEMORATIONS FOR the 59th anniversary of Tibetan Uprising Day were held in Taipei today, with a march beginning outside of the Zhongxiao Fuxing Sogo, and marching southeast to Taipei 101. The march then circled Taipei 101 once before finishing in a park next to Taipei 101.

The march was attended by several hundred. Participant organizations included Taiwan-based Tibet support organizations such as the Human Rights Network for Tibet and Taiwan, Taiwan Friends of Tibet, and Students for a Free Tibet, NGOs such as the Taiwan Alliance to End the Death Penalty, the Taiwan Tongzhi Hotline, the Taiwan Association for Human Rights, Covenants Watch, the Taiwan Labor Front, and Third Force parties as the New Power Party. Two DPP legislators were also among the speakers, including Yu Mei-Nu, known for her progressive stances, as was NPP city councillor candidate Lee Ying-Meng, formerly a legislative assistant to Freddy Lim, who is well known for his Tibet advocacy. Moderators included notable Tibetan activist Tashi Tsering, who lives in Taiwan. 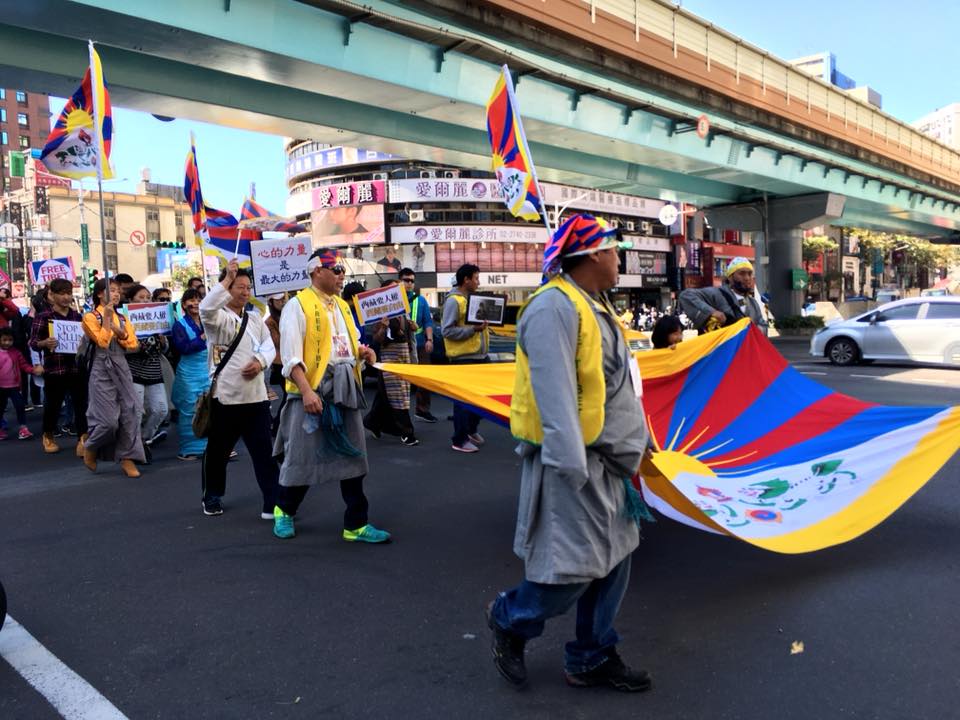 Tibetan monks based in Taiwan and members of the Tibetan diaspora living in Taiwan were also participants. As such, the demonstration also involved Tibetan traditional prayers and religious ceremonies, and the singing of Tibetan songs including the Tibetan national anthem. Before the commemoration, the Cycling for a Free Tibet event was also held to build momentum for the march. Likewise, the demonstration today marks a set of events which will continue through the month.

Tibetan Uprising Day commemorates a 1959 uprising against Chinese rule in Tibet after the Chinese annexation of Tibet. Since then, Tibetan exile organizations commemorate the uprising as a symbol of resistance against China, as part of continued attempts to call attention to the contemporary plight of Tibetans. 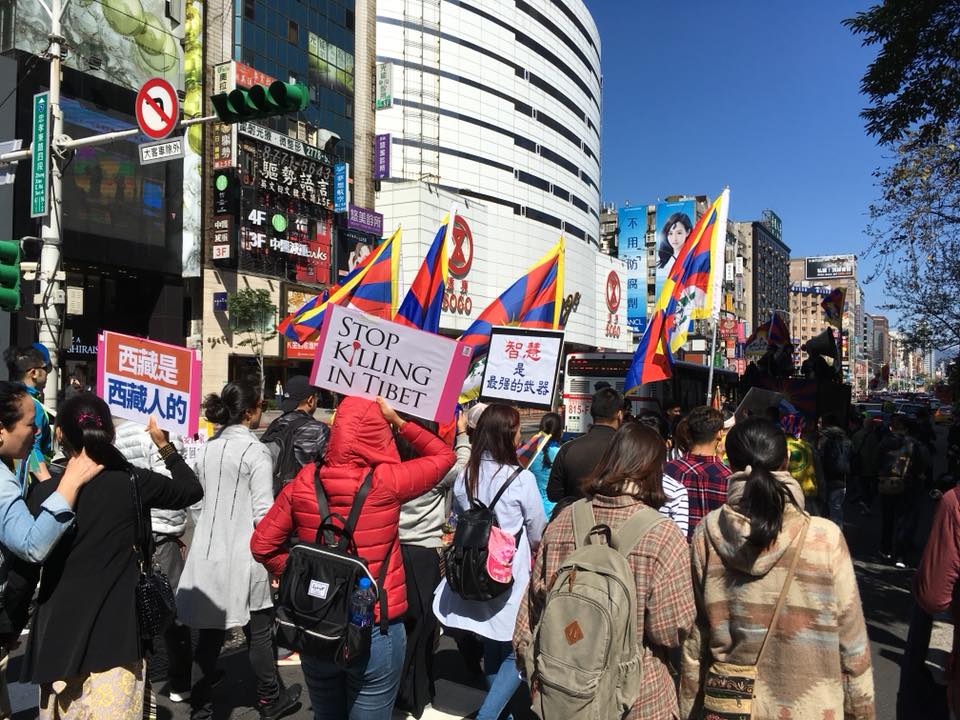 As cited by speakers, the plight of Tibetans has worsened in the past year. Just one day before Tibetan Uprising Day, Tsekho Tukchak, a man in his forties, self-immolated himself in demonstration against Chinese rule. Tukchak would have been the 153rd Tibetan to self-immolate himself since 2009 in Tibet. Speakers would state that, against the claims by the CCP that Tibet has become economically prosperous under its rule, continued self-immolations in Tibet demonstrate how Tibetans remain oppressed, despair over the conditions they face driving those that self-immolate to suicide.

Similarly, Tibetan culture, religion, and language remains under attack, with education policies by the CCP aimed at stamping out Tibetan culture, language, and religion in the hopes that this will dampen Tibetan identity. Along such lines, some find the February fire that struck the Jokhang Temple, a significant holy site in Tibetan Buddhism, to be highly suspicious. Alhough the Chinese government has stated that the fire was put out quickly, the Chinese government notably censored information on the fire. 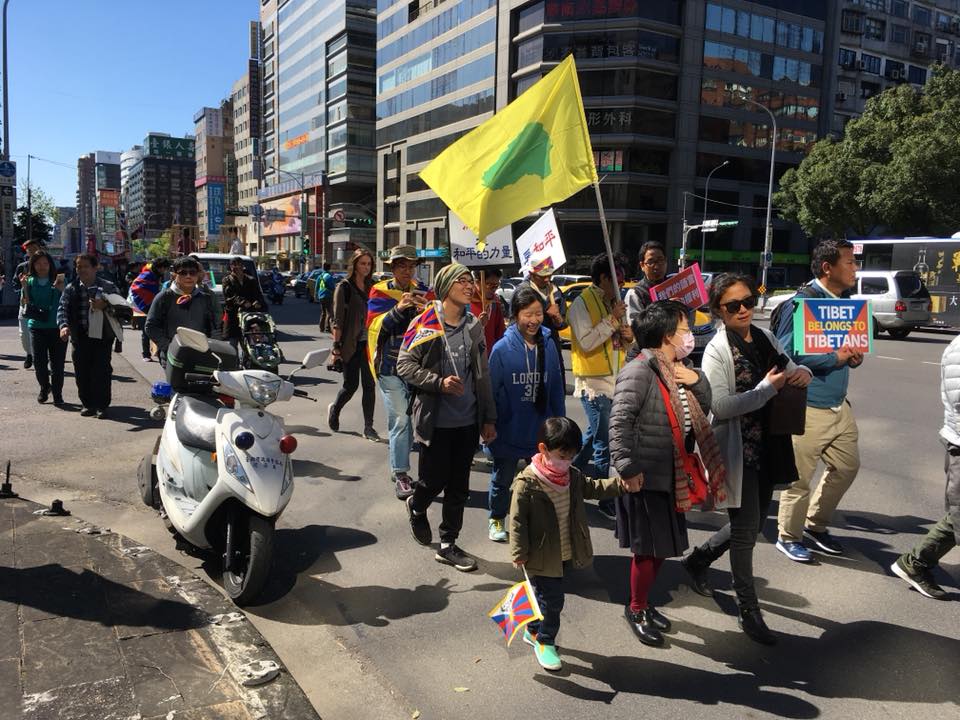 Adding insult to injury, in spite of widespread religious repression, with the recent push by Chinese president Xi Jinping to remove term limits on the amount of terms that Chinese presidents can serve—a move widely seen as intended to pave the path to lifetime rule by Xi—the CCP now goes so far as to claim that Tibetans venerate Xi’s leadership to the extent of viewing Xi along the lines Buddhist deity. Wang Guosheng, the party secretary of Qinghai province, would raise eyebrows in the past week when he claimed that Tibetans venerate Xi as the living incarnation of a boddhisattva. Tibetan Buddhists notably venerate their spiritual leader, the Dalai Lama, as the living incarnation of the boddhisattva Avalokitesvara.

It was a thread running through comments by speakers that Taiwan and Tibet shared a common plight, seeing as both face claims on their territory by China. The 310 Tibetan Uprising Day was compared to Taiwan’s 228 Massacre, seeing both involved uprisings against a colonial government that were put down. Yet seeing as Taiwan is currently not ruled by China, while Tibet is, Tibetan speakers would raise that they are free to make comments criticizing China in Taiwan, but they could even face execution for such comments if they made them in China or Tibet. While some calls for Tibetan independence were raised, it was also raised during comments by Tibetan speakers that the Dalai Lama had backed away from an outright pro-independence position, and stated support of Tibetan autonomy within China rather than outright independence. 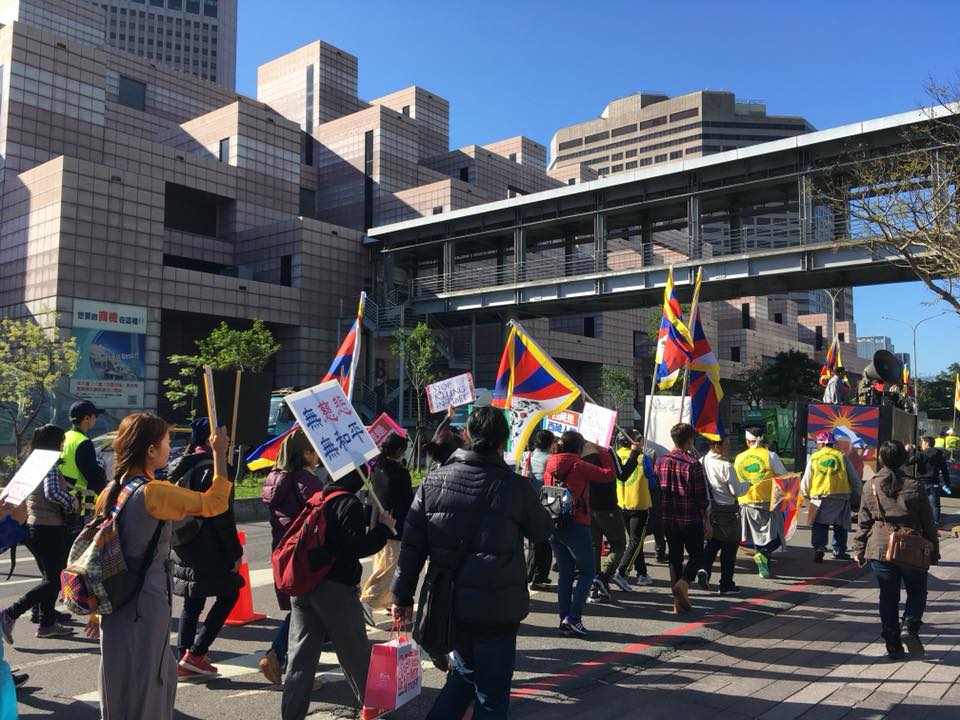 At the same time, speakers would also raise that they were not against Chinese, seeing as Chinese are themselves oppressed by the CCP in terms of restrictions on political freedoms, for example, citing the death of Chinese Nobel Peace Prize winner Liu Xiaobo and how the Chinese government attempts to prevent many Chinese from even becoming aware of Liu. The parade route of the march was thus designed to take the march along areas where Chinese tourists congregate.

The demonstration illustrates cooperation between Taiwanese and Tibetans, then, regarding shared issues regarding independence and sovereignty. However, as the situation in Tibet remains dire, it still will require continued organizing in order to raise awareness of the plight of Tibetans in Taiwan and internationally.