Right before midnight on February 6, 2018, an earthquake of magnitude 6.4 hit downtown Hualien City. Many Hualien locals, who had been used to constant quivers from the earth, were shocked for real this time. Four buildings on the Milun Fault that stretches across downtown Hualien City either tilted or collapsed. The earthquake claimed 17 lives, injured 285, and displaced 750 people. Furthermore, as a city heavily dependent upon its tourism industry, all hotel, hostel, and Airbnb owners in Hualien saw their long-anticipated Lunar New Year rush week reservations vaporize instantaneously the morning after the quake.

As the rescue mission continued the following days, most downtown Hualien residents and shop owners were still without running water. Jason Delickta, a Michigan transplant who co-owns the Salt Lick and Chicago restaurants near the fault line, was constantly hauling water from home to keep the kitchen open. Like many local restaurant and street food vendors, he was doing what he does best to support the community—he prepared and delivered barbecue burger sliders to the rescuers and to the displaced residents at the homeless shelters.

Six days after the earthquake, Jason sat down with me at Salt Lick— one of the locals’ favorite restaurants, famed for its authentic American smoky barbecue. A loud drilling noise was in the background as a plumber attempted to reconnect water pipes right outside at the arcade to get running water back to the restaurant.

Chu Yi:  First of all, where do you hail from? And where are all of your co-partners from?

Jason Delickta:  I am from Michigan. Ben, the other co-owner of Salt Lick, is from Alaska. The restaurant has been opened for five years. We opened Chicago, the pizzeria, just a year ago. Ryan from Pennsylvania and Sabrina from Tainan joined the team so that we could manage two restaurants.

JD:  Right now our clientele is probably 50% Hualien local, 35% from Taiwanese tourists, and 15% foreigners— those who get tired of Taiwanese food and want to get a taste of home.

For the first four years at Salt Lick, business increased 10-25% each year. However, for 2017, business was down 20-25% from the year prior. Before, hotels are all booked; now they’re all empty. Behind the restaurant there’s a parking lot for tourist busses. Before there’d be 20 busses parked there daily; now the parking lot is empty.

I know other people who own businesses, and they all say it has been down 20-30%. And we talked to our distributors—the guy we buy Coke from—his business is down 30-40%. All distributors are down.

CY:  When the earthquake hit, how much damage did it do to the restaurants? And how do you think it’ll affect your businesses?

JD:  It’s been six days since the earthquake, and we still don’t have water. You know…[Loud drilling sound in the background], that’s the noise you hear.

We’ve lost probably about a hundred thousand or more for each restaurant from damages caused by the earthquake—dishes, plates, glasses and food that went bad because we couldn’t open for several days. But that’s nothing compared to…This month, we’ll lose probably a million in revenue.

I’m not the best judge of what business is supposed to be like in Hualien. I just know that the line at Gong Zheng Bao Zi (公正包子) is usually a good indicator of what business will be like for that day. Normally there’d be a hundred to two hundred people in line, and we can tell by that line how busy we will be. But just yesterday I went there, and there was zero people in line. I think this is going to be a straw that break the camel’s back for a lot of the restaurants in town. I think after this you’ll see a lot of B&Bs close, as well as hotels and restaurants. It’s unfortunate that it has to come to that.

Hualien is busy from June to August and during Chinese New Year. We had been waiting for Lunar New Year; now I can see what’s going to happen. What I see now I can tell you we’ll be down 30-40% from 2017.

Before we were down 25% in 2017, now this earthquake…we’re down 75% compared to 2016. We actually don’t know if we can keep this restaurant open now. If next month we lose another half million in revenue…You have to realize that a 75% drop will kill a restaurant; we can only survive maybe two more months like this then we’ll have to decide to close one of the two restaurants.

Even today there are aftershocks. Even the locals are scared, and a few have left Hualien temporarily. This is kind of like a typhoon day that goes on for three months. Hualien locals are still here, but they don’t go out. Because on a typhoon day, yeah, our business will be terrible…But this will go on for a while.

CY:  I’m aware that after the inauguration of President Tsai, China drastically decreased number of tourists allowed to come visit Taiwan. However, data from Tourism Bureau shows that despite there was a decrease in Chinese tourists, number of visitor arrivals to Taiwan was the same in 2017 from that of the year prior.  Most of them are from East and Southeast Asia. What’s your reflection towards the numbers on a more granular level as a restaurant owner?

JD:  I guess it’s because the Chinese tourists not coming. They say that there are just as many tourists as before…but it’s pretty obvious that there is not, or they don’t stay in Hualien. Maybe they’re from other countries and they don’t spend as much money. Whereas before, in 2015 to 2016, probably about 5% of our customers are from China, and now it’s zero.

But I think the problem affects the whole town. Even if they don’t eat at your restaurant, they spend money in Hualien. I know for sure that Chinese tourists spend more money than Southeast Asian tourists. Korean, Japanese, maybe about the same. Now they say there’s an increase of tourists from Southeast Asia—Thailand, Vietnam, etc. They don’t spend too much money.

Chinese New Year in 2016, we had so many Chinese tourists coming here for dinner, and they would all order everything. They ordered ribs, T-bone steaks, ribeyes. They would spend 1000 NTD per person. They don’t care about spending money; they come here to spend money. I feel like they came here they’d spend $10,000 NTD per day in Hualien. In 2016, they’d come and say “just give us one of everything, we don’t care.” 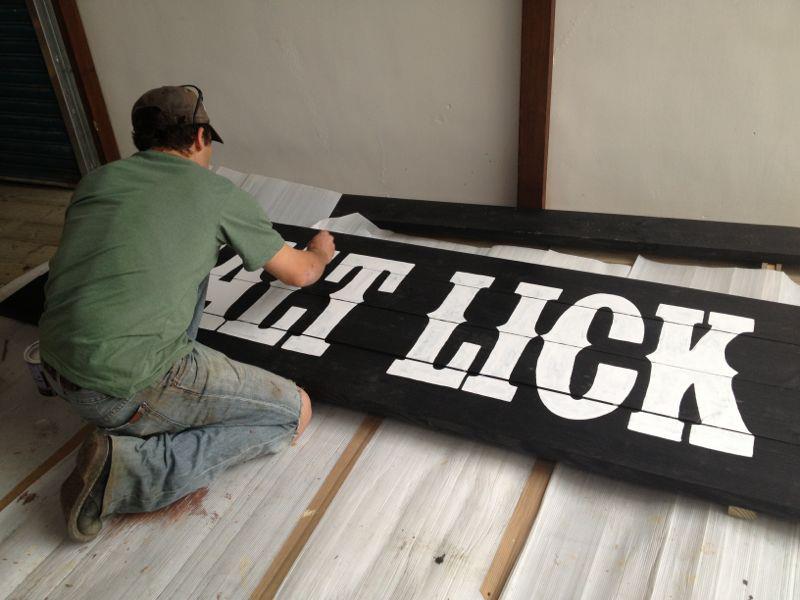 CY:  Lunar New Year this year will for sure be ruined. Do you have any mid-to-long term plan in place to maintain your businesses?

JD:  We don’t have a huge amount of savings because we’ve reinvested in improvements of our restaurants. We pretty much put all of our money into Chicago. I don’t know what will happen. I really hope for the sake of this town, that the tourists come back sometime soon. Because it’s not hurting not just me, but a lot of my friends, and a lot of people we do business with.

We built Salt Lick five years ago, and we’ve put most of our savings into building the second restaurant, Chicago. It’s not just the earthquake, but the earthquake was the last straw. It’s pretty depressing, because my partners built the two restaurants by hand…We spent three months each just to build each restaurant. Four of us, 16 hours everyday for for three months…So it’s pretty depressing for me because I had spent all my time; we spent years to create these two restaurants. And now it’s looking pretty bad. I think this will go on for a long time; it’ll go on until people forget about the earthquake, which will take several months. I really hope that I don’t have to teach English again, but you never know! I don’t want it to come to that, because that’s what I like to do—I like to cook; I like to own a restaurant.