The encirclement and blockade of Zhongzheng First Police Precinct was a spontaneous reaction to Zhongzheng First Police Precinct chief Fang Yang-Ning clearing demonstrators that refused to withdraw when the occupiers within the Legislative Yuan did. Although Fang claimed earlier on the night of April 10th that he would not forcibly clear demonstrators, he later went back on his word, and in the chaos, Alliance of Referendum for Taiwan convenor Tsay Ting-Kuei was nearly struck by a truck. 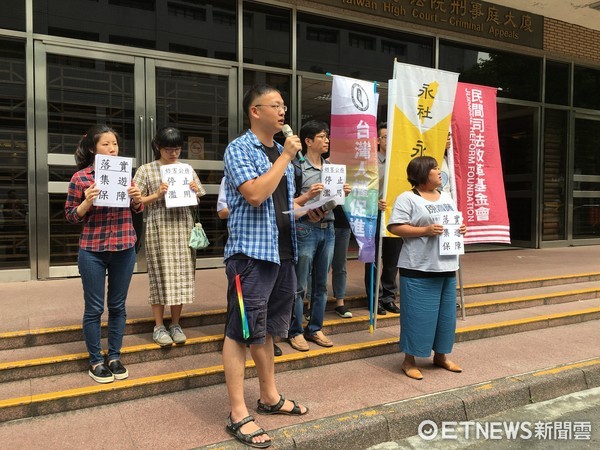 This prompted outrage and calls for mobilization on PTT, leading to a spontaneous protest on the night of April 11th, 2014 outside Zhongzheng First Police Precinct, in which demonstrators surrounded the police station and refused to withdraw unless Fang resigned. Late in the night, Fang eventually announced his resignation, following which the crowd dispersed, although Taipei mayor Hau Lung-Bin subsequently refused to accept Fang’s resignation and Fang kept his job.

At the press conference, the four demonstrators called attention to the charges they faced as demonstrating continued restrictions on political freedoms of assembly upheld by the Parade and Assembly Act. The four demonstrators are well-known in Taiwanese activism, many having originally been among the first to have entered the Legislative Yuan, and including individuals that actually entered the DPP or Third Force parties after the Sunflower Movement or touted as youth leaders by government-affiliated organizations.

However, what the charges that these four demonstrators continue to face also raise is that while public perception is that Sunflower Movement activists have been acquitted of their charges, this is not so. Many of the prominent figures viewed as “leaders” of the Sunflower Movement in the public eye, such as Lin Fei-Fan, Chen Wei-Ting, Huang Kuo-Chang, and Tsay Ting-Kuei were found not guilty of charges they were facing in March 2017, with the justification that their actions were justifiable civil disobedience. For many at the time, this was seen as reflecting that the Sunflower Movement continued to be thought of positively by Taiwanese society, and that its actions were largely viewed as justified, three years down the line.

Key figures of the Sunflower Movement acquitted in March raised the need to continue to pay attention to other legal cases in which Sunflower Movement activists were facing charges, stating that if they had been found guilty, their collaborators in the movement should also be found not guilty. Nevertheless, it is the case that individuals who participated in more controversial actions of the movement, such as the “324” attempted occupation of the Executive Yuan and the “411’ encirclement of Zhongzheng First Police Precinct, were found guilty of charges. In the case of “324,” out of 21 defendants, 10 were found guilty while 11 were acquitted.

There has simply not been a great deal of media attention paid to these cases, because the acquittal of the key figures of the Sunflower Movement ended up overshadowing these other cases. Furthermore, while the Sunflower Movement’s occupation of the Legislative Yuan is largely seen in a positive light, “324” and “411” are actions still more divisive of public sentiment.

Press conference held regarding charges faced by demonstrators for action during the 324 attempted occupation of the Executive Yuan. Photo credit: PNN

Seeing as the law is never above politics, particularly in Taiwan, one suspects that this may have been deliberate on the part of the judiciary and Tsai administration, which rode into power through winning the post-Sunflower Movement youth vote and constructing the public perception that it sought to complete the demands of the movement. Yet the Tsai administration likely does wish for protest of the same nature or civil disobedience on the same scale as the Sunflower Movement to occur against it, which is why it would still mete out punishment to participants in “324” and “411”.

It may be still of importance to pay attention to these and other cases, then, and movement participants still face stiff legal charges.