SHOULD TAIWAN support Catalonia in struggle for self-determination? While there are those who attempt to place distance between Taiwan and Catalonia, with the view in mind that Spain should not be alienated through support of Catalonia because it is a more valuable ally for Taiwan than Catalonia, or the view that Taiwan’s situation differs from Catalonia because it is de facto independent of China whereas Catalonia is not de facto independent of Spain. And so, as is correct, Taiwan’s independence struggle is in many ways the struggle to preserve this independence from China rather than to achieve a form of independence that did not exist before.

Nevertheless, this has not prevented most of those in Taiwan who support continued Taiwanese independence from feeling sympathetic to Catalonia’s cause. Similarly in Hong Kong, which more unambiguously has a similar political situation to Catalonia than Taiwan, the post-Umbrella Movement Demosisto political party openly declared support of Catalonia. 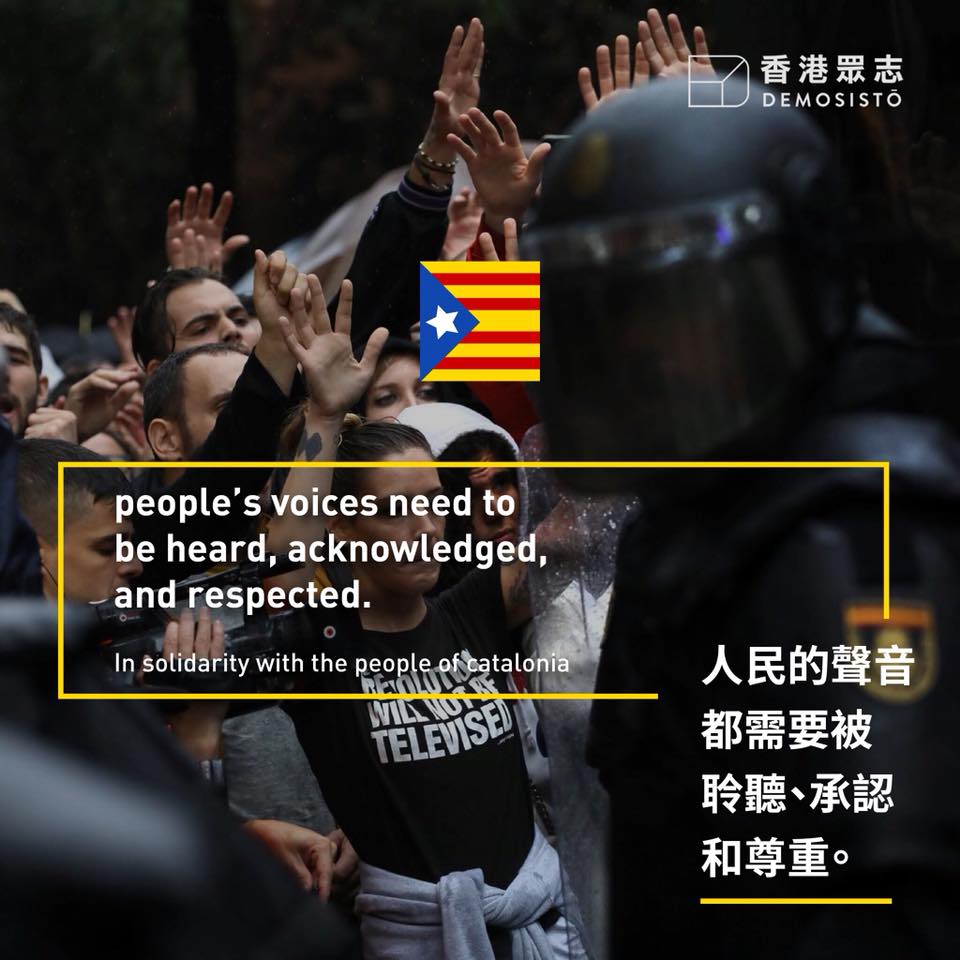 Statement by Demosisto in support of Catalonia. Photo credit: Demosisto

One can argue that Taiwan differs from Catalonia and Spain because of Taiwan’s existing de facto independence versus Catalonia’s lack of independence or because Spain may legally be within its rights to crackdown on separatism within its borders. Nevertheless, by that logic, if only de facto independent statements should have independence, Taiwan should not support Hong Kong, Tibet, Xinjiang, or other contexts. And, with regard to the latter point, is it then right for Spain to invade Catalonia, to put down its independence by force and arrest its political leaders, and to strip Catalonia of its autonomy to impose direct rule?

One cannot separate the two issues to claim that the Spanish police crackdown is wrong but that so, too, is Catalan independence, because Catalan independence will necessarily entail the use of police to put it down–states by definition do not take kindly to separatist movements and will use force to put down attempts at independence. And indeed, if one sees Spain as fundamentally justified in attempting to put down independence efforts, one might as well also justify the underlying logic justifying Chinese use of force against Taiwan.

After all, many of those who advocate Taiwanese independence sometimes forget the rather basic fact that while Taiwan may be de facto independent of China whereas Catalonia is not de facto independent of Spain, Taiwan is not de jure independent of China, due to lack of acknowledgment from the international community. As such, legally speaking, there is far less separation between Taiwan and Catalonia than one thinks. And if there are people out there in the world who have justified Spain’s actions against Catalonia with the claim that Spain is simply carrying out its proper legal authority, one imagines that there will also be those who justify Chinese attack on Taiwan as legally binding because of Taiwan’s lack of de jure independence. This would not be altogether surprising. In general, the same criticisms made of Catalonia are also longstanding criticisms against Taiwanese independence.

Apart from Taiwan’s de facto independence, the other major difference between how the international world reacts to Catalonia and Taiwan may be in terms of the interested powers, then. Catalonia is not geopolitically significant in the way Taiwan is, nor would the Spanish attack on Catalonia involve as significant loss of life as a Chinese attack on Taiwan. But the lack of any juridical separation between Taiwan and Catalonia is more broadly illustrative of how calls for self-determination will have to be collective, if they are to take place at all.

Indeed, in consideration of how particularly unique Taiwan’s geopolitical circumstances are, as a wholly de facto independent polity with its own government, constitution, economy, and currency which lacks de jure recognition of its independence, there are few comparisons to draw for Taiwan at all. Hong Kong, which is frequently compared to Taiwan because it also confronts the issue of Chinese encroachment on its sovereignty, is actually more similar to Catalonia than Taiwan in lacking de facto independence. And so if Taiwan rejects the basic principle of self-determination, this to reject the basic principle upon which other nations may be sympathetic to Taiwan and support it. This bears in mind for evaluations of what stance Taiwan should take relative to Catalonia.