DEBATES HAVE broken out in Taiwan following the death of a “runaway” migrant worker from Vietnam after he was shot to death by Taiwanese police on August 31st. The suspect, 27-year-old Nguyen Quoc Phi, was a migrant worker who fled his contract and thus became a “runaway” worker. Nguyen reportedly attacked a police officer with rocks and was subsequently shot nine times by police, bleeding to death.

Police officers were searching for Nguyen after reports of theft and vandalism and reportedly discovered him attempting to break into a car. Police claim that attempts were first made to apprehend Nguyen with a baton, which broke, as well as pepper spray, which did not have the intended effect of immobilizing Nguyen, leading to the eventual use of deadly force on him. Police have justified this by claiming that Nguyen could have posed a threat to other individuals if he fled to a residential area. 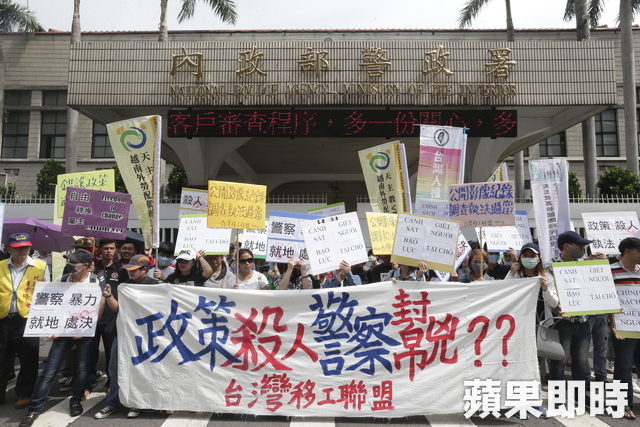 Nonetheless, migrant workers in Taiwan and affiliated Taiwanese migrant worker aid groups have called for an investigation into whether the use of deadly force against Nguyen was justified, with the release of security camera footage from the shooting incident. In particular, some suspect that there may be a racial aspect to the quick use of deadly force against Nguyen. Some also suspect based on Nguyen’s actions that mental illness may have been another factor.

Indeed, Taiwan is not a country in which shooting incidents take place very often, due to strict restrictions on the owning and purchase of firearms by private citizens, and while police shooting incidents do take place from time to time, such incidents are not prevalent. And so the shooting death of Nguyen is highly unusual, particularly given Nguyen only attacked police officers armed with rocks and no other weapons.

Yet while public debate has broken out following Nguyen’s death, most of this has centered around whether police actions were justified or not. It is to be seen whether public discourse will steer in the direction of the considering the poor social and economic conditions facing migrant workers in Taiwan.

Restrictive contracts which give undue power to the broker agencies that provide migrant workers with their employment in Taiwan and arrange for their transportation to Taiwan from their home countries are often what leads migrant workers to become “runaways.” Although measures to limit the power of brokers have been proposed in the past, following protest from migrant workers groups, the Ministry of Labor remains evasive on taking further actions to limit the power of brokers, claiming that direct hiring practices already exist in Taiwan and that brokers continue to exist because of market need.

Likewise, while Nguyen’s death has become a high-profile case because of the nature of his death involving police violence, past cases in which migrant workers died indirectly at the hands of the Taiwanese police largely failed to become a matter of public discussion. In July of this year, an Indonesian migrant worker jumped to her death from the third floor of a building following a raid by immigration police, but this did not lead to controversy over policing or immigration practices in Taiwan. Other horror stories exist of migrant workers kept in conditions of slavery, whether this occurs on the high seas with migrant fishermen, of factory workers, or others.

According to researchers, the poor conditions facing migrant workers is such that this is thought to contribute to higher rates of mental illness among migrant workers, and leaving them to turn towards psychiatrists that mainly simply prescribe medication. With regards to Nguyen’s shooting death, it is also not impossible that this was a contributing factor. 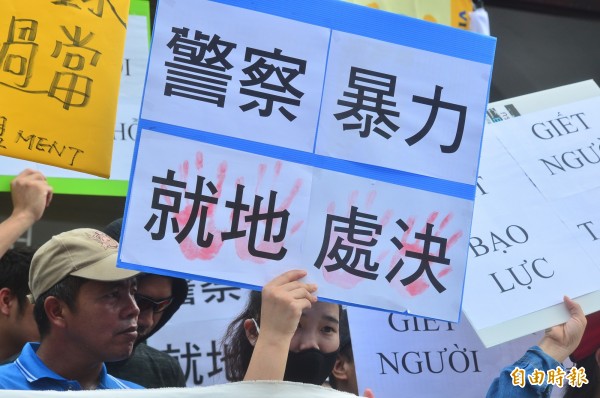 Ironically, such events come at a time in which the present Tsai administration claims that it intends to build stronger political and economic ties with Southeast Asian countries through its New Southwards Policy, as a way of weaning Taiwan off of economic overdependency on China. But the Tsai administration has largely remained silent in incidents which stand to damage perceptions of Taiwan in Southeast Asia such as large-scale environmental disaster in Vietnam caused by the Taiwan-owned Formosa Plastics, the largest ecological disaster in Vietnamese history and the cause of large-scale social protests in Vietnam.

Likewise, given the growing migrant worker population in Taiwan, one of ten Taiwanese children currently in elementary or middle school has a foreign-born mother, something which the Tsai administration also frequently raises as a way to distinguish Taiwan from China. But the poor treatment of migrant workers in Taiwan leaves much to be desired and current citizenship laws sometimes leaves foreign-born mothers in a state of legal limbo regarding their ability to stay in Taiwan with their children.

In general, it should be evident that last month’s shooting incident points to a larger set of unresolved social issues in Taiwan which are, unfortunately, not currently widely discussed in Taiwanese society. And so the road for justice in migrant workers in Taiwan may be a long one. This incident, unfortunately, may simply be another case in point.