In examining this list, one observes that articles were primarily censored based on topic. Articles related to regions of China which China considers to have active separatist movements were pulled, as a result of which articles about Tibet, Xinjiang, Hong Kong, and Taiwan were pulled. Articles discussing historically sensitive matters such as Tiananmen Square, the Cultural Revolution, and China’s free market reforms during the Deng period, were also removed. Likewise, articles discussing individuals China considers to be dissidents such as Nobel Prize for Literature winner Gao Xingjian, past leaders of China, as Hu Jintao and Jiang Zemin, and the Falun Gong were also removed. No distinction was made in articles removed based on academic field of study, with articles from the standpoint of political science, international relations, anthropology, sociology, literature, and cultural studies alike removed. Scholars of varying political views and methodologies were also removed, no matter how seminal their work has been in the history of China Studies, including articles by present members of the executive committee of the China Quarterly.

The letter from Tim Pringle, editor of the China Quarterly, which prompted outrage on social media

Unsurprisingly, criticisms have followed of this decision, including criticisms on Weibo from China Quarterly editorial board member Yang Guobin. As Yang pointed out, the Chinese government would have taken an odd step in ordering the removal of articles while claiming that it is attempting to strengthen China Studies globally. Nevertheless, perhaps China’s actions should not surprise. In its soft power efforts, the Chinese government usually takes the approach of attempting to erase any and all traces of negative aspects of China, rather than taking the approach of claiming that, as with any large country, China also has some warts. China Quarterly committee member Jon Sullivan would also point out that this will deprive Chinese academics most of all of access to scholarship about China.

And, indeed, the selective erasure of those aspects which China wishes to suppress knowledge of only belies the hypocrisy of the Chinese party-state. For all claims by the Chinese government that Tibet, Xinjiang, Hong Kong, and China are intrinsically a part of China and that the Chinese party-state only has the best interests of the residents of these places in mind, the Chinese government has seen fit to try and erase academic scholarship about these places, to erase knowledge about what is supposedly part of China. Likewise, regardless of one’s take on events such as the Cultural Revolution, Deng era economic reforms, or the Tiananmen Square Massacre, it cannot be disputed that these constitute historically significant moments in modern Chinese history without which we cannot understand present-day China.

But the Chinese government has seen fit to itself erase Chinese history, seeing as it fears that history could contribute to an ambivalent view of present day rule by the CCP. Indeed, it is highly telling that among removed articles from the China Quarterly include articles about the last two Chinese presidents before Xi Jinping, Hu Jintao and Jiang Zemin. What does it say about the political succession of a country in which one cannot discuss even the last two presidents, that is to say, the political administrations of China of the past two decades? In this light, the articles removed from the China Quarterly bely the fundamental anxiety that the CCP has that information its own history, its roots, and its origins, can lead to the undoing of the party in the present, and the means by which the current Xi administration fears that information about how the rule of its predecessors differed from it will lead to political nostalgia that it fears will stir up dissent. 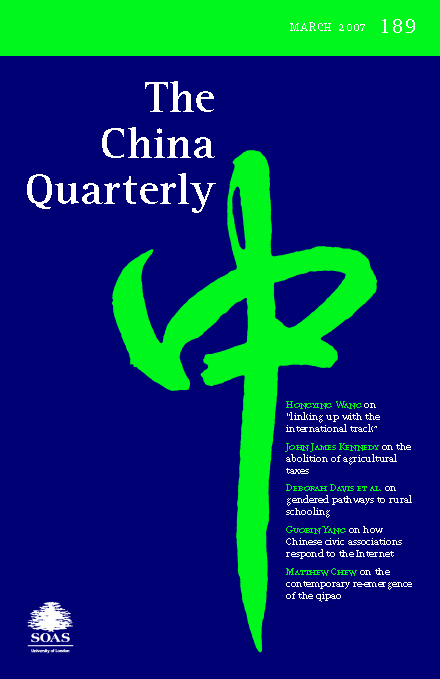 As for questions of academic freedom in China and in the China Studies going forward, one wonders whether the China Quarterly’s decision to self-censor will set a precedent which leads more leading academic publications in the China Studies to self-censor. But if so, this would not be too surprising. The China Studies faces the inherent challenge of that scholars who touch topics deemed to be too sensitive may, even accidentally, find themselves denied access to China, their object of study, something which could spell the end of their careers. As such, the temptation to self-censor has always loomed large in the China Studies, and what is studied within the China Studies has always been deeply bound up with what is permissible to study at any given moment. Furthermore, given the need for academic departments to seek financial resources and the like in order to continue to survive, the enormous resources at the disposal of the Chinese government have always allowed it to unduly influence academic research on China, as we see in the proliferation of Confucius Institutes globally.

China also seems to be stepping up attempts to influence academia, as seen in China refusing to allow Chinese academic Feng Chongyi to leave the country to take up his appointment at the University of Technology Sydney and likely encouraging Chinese student groups to protest political causes and individuals that China opposes. Other China Studies journals may see similar censorship in the near future, China very likely using the China Quarterly as a trial balloon as to what actions to take subsequently.

The future of academic freedom in China and for the China Studies itself may be at stake in recent events, then, but at the same time, this is not anything particularly new. On the contrary, we may precisely take it as a recognition of the subversive power of knowledge and of academic inquiry which leads the Xi administration to try and set limits on the academic study of China, despite the fact that one often hears many lambasting the apparent lack of real-world applications for much academic study. However, the stakes of the game are higher than ever for the China Studies, it seems.