BUNUN COMMUNITY elders, academics, and other community members from the village of Bahuan held a press conference Friday in Xinbeitou to press National Taiwan University (NTU) to return of the bones of their ancestors. Namely, 64 sets of bones were dug up from the Bahuan village’s Loiq gravesite and taken by National Taiwan University in 1960 for anthropological research, something which was done without the permission for community members and relatives of the deceased. The bodies had been buried between 1933 and 1955 and so these are, in fact, fairly recent burials.

Bunun community members therefore have pressed for the return of the bones, in order to allow their ancestors to return to their communities, and to rectify an important wrong committed against indigenous for the sake of realizing transitional justice for indigenous. In particular, Bunun community members have pointed to that this act was carried out under the ROC as a means by which the ROC state continued and inherited the colonial efforts of the Japanese empire, including a racialized anthropological view of Taiwanese indigenous, seeing as Japanese colonial authorities made substantial anthropological inquiry into Taiwanese indigenous as part of efforts to find a scientific basis for Japanese racial supremacy to justify Japanese leadership within the “Greater East Asian Co-Prosperity” sphere. Such efforts apparently also continued under the KMT, as seen in the actions of NTU in 1960. 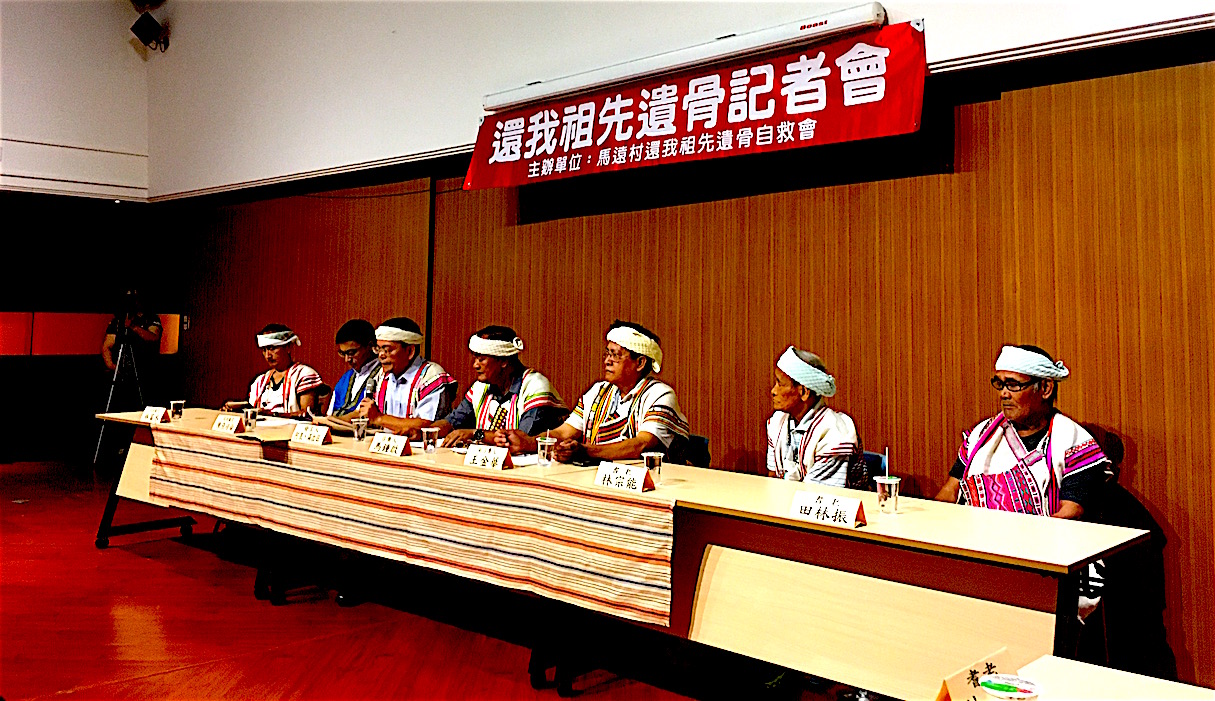 Community members were far from in a position to refuse the police or NTU which was, after all, under the control of KMT authorities at the time. That is to say, community members did not like that the bones had been dug up and obviously felt uncomfortable with digging up the bones of their ancestors–in fact, quite recent ancestors including individuals who had only died five years previously–but they were not in a position to contest it. Yet it was only until recently that village elders felt comfortable finally pushing for the return of the bones, when contemporary academics began to discuss the case. This is perhaps indicative of how many victims of past crimes of colonialism by the ROC still remain uncomfortable pushing for justice for past crimes because of the lingering scars and fears of the authoritarian period, in spite of transitional justice becomingly increasingly discussed in contemporary political discourse.

As such, the bones were dug up using workers from outside the village because Bahuan community members were not willing to dig up the bones, with workers paid 35 NTD a day. Indeed, as demonstrating the unwillingness of community residents for this to happen, Bahuan residents alive at that point in time also stated that records were kept of community meetings discussing what to do about the bone digging. Two community elders present at the conference remember this, one having been fourteen years old and the other ten years old in 1960, stating that at the time, residents of Bahuan had not even been informed what agency had taken the bones, where the bones were taken to, and what they were planning on doing with the bones.

Nevertheless, irreparable harm has already been committed by NTU. Namely, while 64 sets of bones were taken, NTU currently only has 43 sets of bones and is missing 21 sets. The crimes against indigenous ancestors, in this respect, may be irreversible. Nevertheless, at present, Bunun community members hailing from Bahuan demand the return of all bones, including the lost 21 sets of bones, the building of a memorial for these ancestors, a formal apology and admittance of wrongdoing from NTU, and reparations to the families of the victims.

Although Bahuan village is, in fact, the only Bunun village in its surrounding area, Bahuan residents were joined in their call for justice by legislator May Chin of the Non-Partisan Solidarity Union, as well as representatives of legislators Kawlo Iyun of the NPP and Kolas Yotaka of the DPP, and of the Indigenous Affairs Community. However, it may require greater push from the public in order to ensure that full transitional justice is realized in this matter, and that does not become a matter which is shrugged off by the current government, as with so many matters regarding transitional justice in Taiwan and in particular transitional justice for indigenous.