STRANGE SCENES took place across Taiwan yesterday as part of a nationwide day of action against pension reform, mostly from pan-Blue military veterans. Most visible of these would be the attempt by several hundred opponents of pension reform to storm the Legislative Yuan, something which led to clashes with police and police injuries when they attempted to tear down the razor wire fence surrounding the Legislative Yuan, waving KMT flags all the while. These actions take place simultaneously as the DPP attempts to pass its pension reform measures into law, with pension reform measures being in the final stages of legislative review. The KMT has attempted to stall for as long as possible as a last show of resistance to pension reforms.

The issue of pension reform would be an unsettled legacy of the authoritarian period, seeing as the KMT sought to reward those who served the party-state with generous pensions as a pay-off for political loyalty. As a result, individuals who were members of the military, public servants, or teachers and their families came to constitute an elite, privileged class under the KMT. But now, in the post-authoritarian period, Taiwan’s pension system as a whole is threatened with bankruptcy if pensions that continue to be paid out to these individuals are not cut.

Seeing as members of the military, public servants, and teachers benefitted highly from KMT rule, opponents of pension reform have, unsurprisingly, skewed sharply pan-Blue, are oftentimes quite elderly, and homogeneously waishengren. Some, in fact, are old enough to have been born in China. 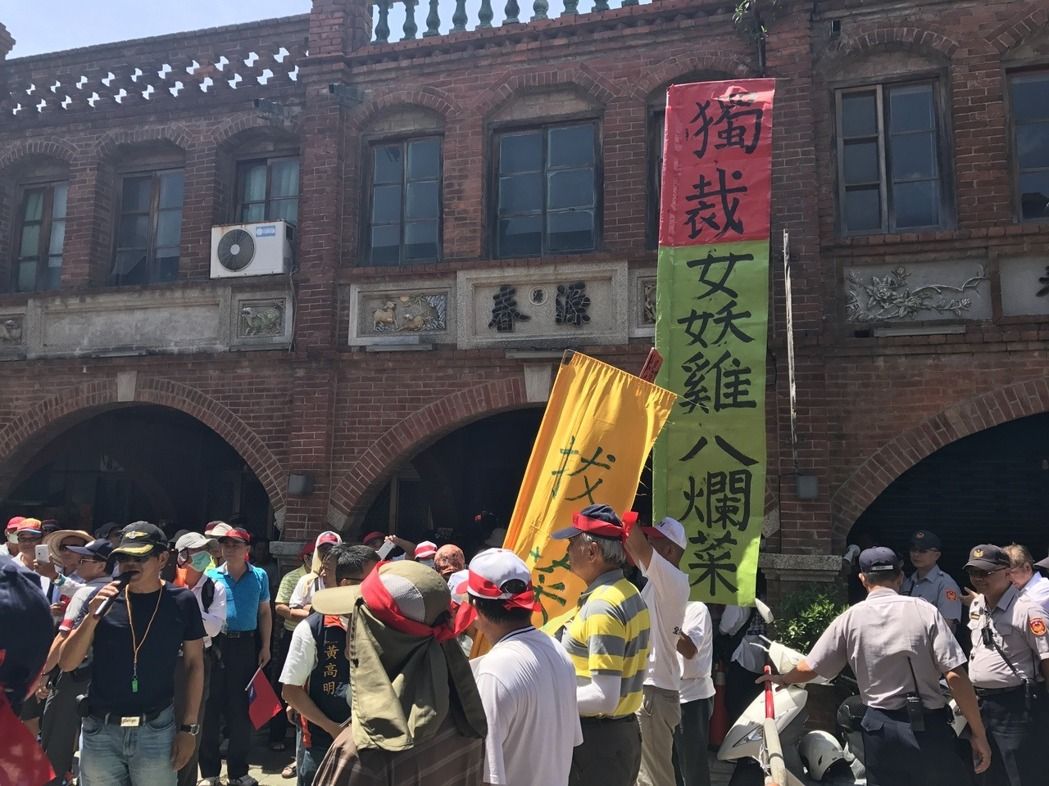 As such, pension reform opponents have attempted to claim that the DPP is targeting them as a form of political persecution, stirring up intergenerational conflict, or ethnic conflict between waishengren and benshengren. But opponents of pension reform have done little to successfully appeal to present-day Taiwanese society. Instead, they have only shown how out of touch they are with present-day Taiwanese society, displayed starkly reactionary ideology, and illustrated that their worldview is own of demanding social obedience to the privileged class of members of the military, public servants, and teachers, as occurred in the past.

Yesterday in Hsinchu, for example, pension reform opponents hung banners on top of the Hukou Sanyuan Temple referring to Tsai Ing-Wen as a “Dictator Evil Witch Prostitute Rotten Vegetable” (獨裁女妖雞八爛菜), “vegetable” being a homonym for Tsai. Yet, although perhaps rather funny with regard to how hyperbolic a statement this is, this statement would not only be sexist and misogynistic, but the banner hanging within a temple was highly disrespectful of the temple, which is, after all, a religious site. Understandably, these actions provoked shock from many.

Perhaps in this action, one can observe the self-centered mentality of opponents of pension reform, then. In general, pension reform opponents have attempted to claim that they are facing a life and death struggle, and gone so far as to demand that Tsai step down from her office in apology for denigrating members of the military, public servants, and teachers, never mind that she is a democratically elected leader who was elected by the majority of Taiwanese society—not just members of the military, public servants, and teachers. Likewise, it is hardly as though the Tsai administration plans on making former members of the military, public servants, and teachers starve to death in the future, seeing as pension reforms will still make provisions for their survival, even if preservation of the pension system may require a reduction of the generous pensions that they were promised in return for political loyalty during the authoritarian period. 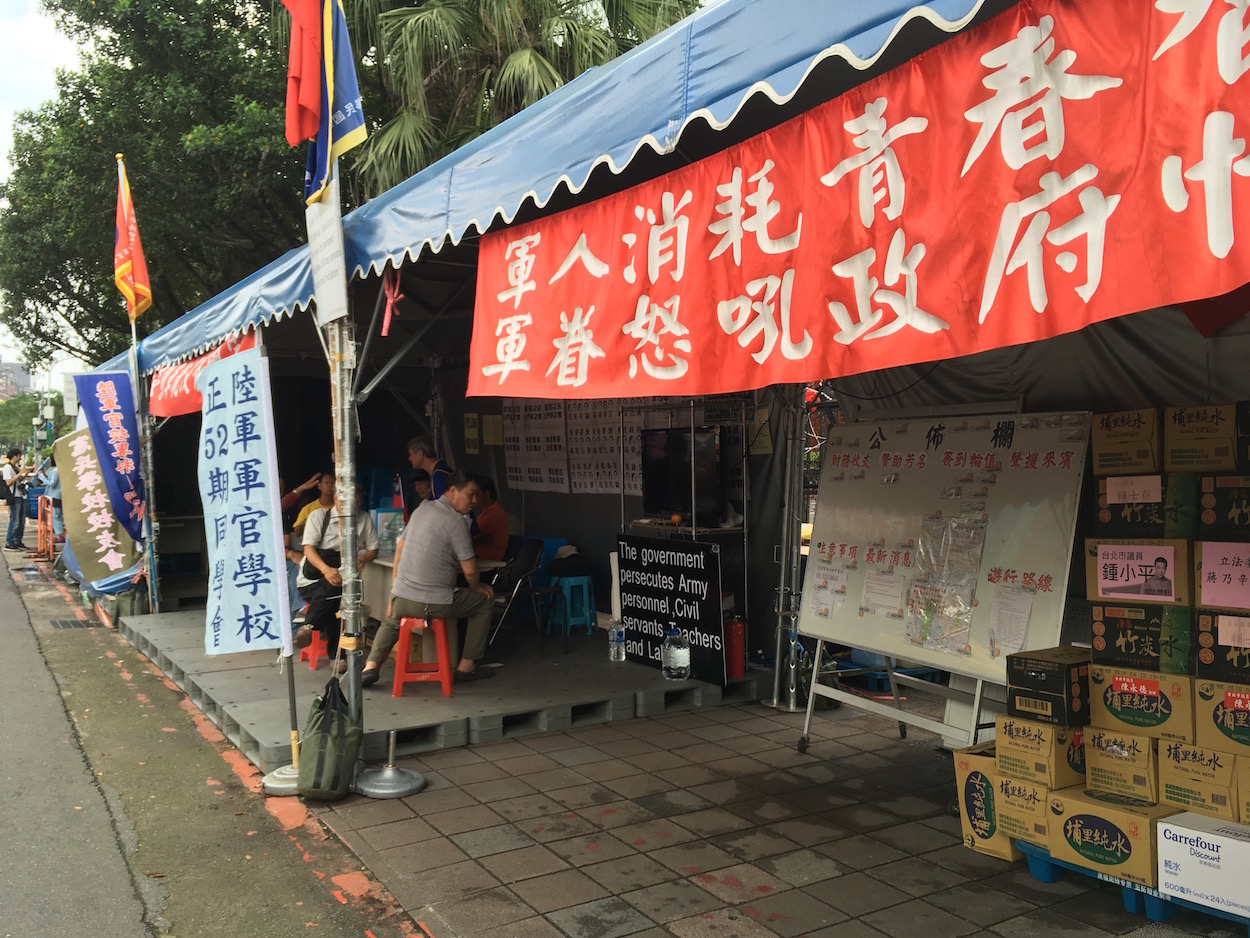 The occupation encampment that pension reform opponents have maintained for several months outside of the Legislative Yuan. Photo credit: Brian Hioe

The public was decidedly more sympathetic to criticisms of the DPP’s plans for pension reform when it did not just come from members of the military, but also public servants and teachers. Nowhere has the Tsai administration suggested raising taxes on the wealthy, for example, as a way to save Taiwan’s pension system, instead focusing wholly on the notion of cutting existing pensions. But former members of the ROC military have a reputation for being decidedly out of step with the sentiments of the Taiwanese public. As the individuals who enforced public order for the KMT party-state and were richly rewarded for their loyalty, retired members of the military sometimes are still quite openly nostalgic for past authoritarianism.

Despite the sharp rise in Taiwanese identity in past years, members of the Taiwanese public could probably still accept a differing sense of identity from members of the military which is more Chinese in nature. But retired members of the military dissatisfied with present-day democratic Taiwan have sometimes gone so far as making high-profile visits to China in which they are suspected of leaking military secrets to Chinese government officials, apparently seeing no problem with undermining Taiwan’s hard-won democratic freedoms for the rest of society, another sign of how they see themselves above the rest of Taiwanese society and their authoritarian mentality.

Indeed, it is ironic to note that numerous attempts by pension reform opponents to storm the Legislative Yuan is probably in imitation of the 2014 Sunflower Movement, in which young people occupied the Legislative Yuan in opposition to the CSSTA trade agreement which was to be signed with China. This subsequently led to widespread social opposition to the CSSTA. As with the broader pattern of members of the pan-Blue camp attempting to imitate what it sees as the successful electoral stratagems of the DPP, including engineering the “populist” Sunflower Movement through riling up Taiwanese young people.

It is probable that part of the highly charged anger of pension reform opponents probably has to do not only with the pension issue, but outrage at the political course Taiwanese society has taken in recent years. Accordingly, in line with their views, signs at the occupation encampment against pension reforms which military veterans have maintained for several months read “Oppose populism”, “Revive Chinese Culture”, or demanding that civilians pay due respect to members of the military for protecting them. 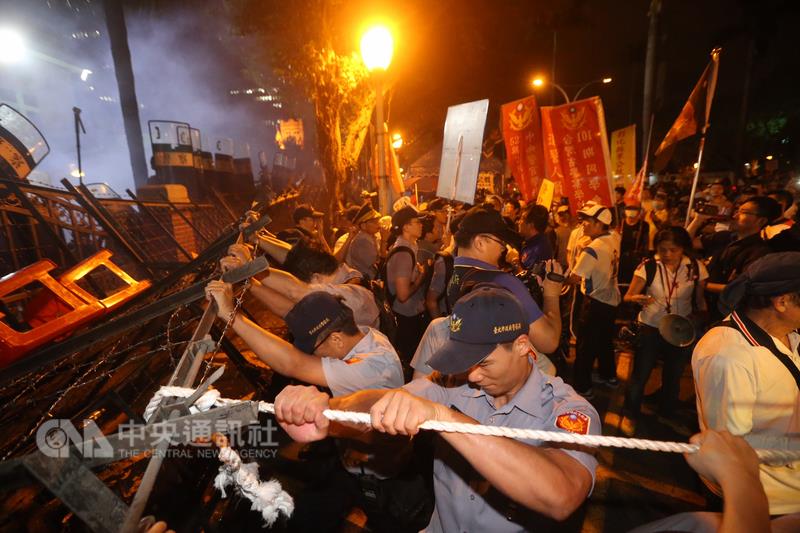 Yet when we compare these differing attempts to storm the Legislative Yuan, the Sunflower Movement occupiers of the Legislative Yuan were not acting on a sense of privilege, but undertaking an act of self-sacrifice by risking physical harm and arrest to oppose something they saw as dangerous for the whole of society—not just themselves. And against the claim that anger against pension reform opponents has some ethnic component to do with the rise of Taiwanese identity among young people, despite their broadly pro-independence stance, in the years preceding the Sunflower Movement, Sunflower Movement activists oftentimes came into conflict with the government when it acted to evict military veterans in veterans’ communities, never mind that they were poor and had lived in these villages for decades.

For Taiwanese youth activists, the difference in a sense of identity between themselves and military veterans old enough to have been born in China did not matter; these veterans were disprivileged individuals who needed aid nonetheless. But on the other hand, as young people will suffer the most in the future from a bankruptcy of Taiwan’s pension system, elderly pension reform opponents have also illustrated that they have no qualms about endangering the future of Taiwanese young people or the rest of society writ large. These are telling differences.

As such, though the KMT remains obligated to make a strong stance against pension reform to placate its supporters, the KMT is probably doing no favors in attempts to win back the Taiwanese public by strongly opposing pension reform. The issue might be one that Tsai Ing-Wen and her government could, in fact, leverage upon to recoup support from the Taiwanese public, if not for the fact that Tsai is probably also wary of antagonizing the public servants which comprise her administration. Military veterans only illustrate their reactionary ideology through their actions.