Demonstration Against Asia Cement Mine On Indigenous Lands Draws 2,500

A MARCH AGAINST Asia Cement’s mine on Truku indigenous lands in and surrounding Taroko National Park was held today, with over 2,500 in attendance. The march began in front of the Executive Yuan at 3:30 and, after marching for an hour down Zhongshan South Road, finished on Ketagalan Boulevard in front of the Presidential Residence at 4:30, where a number of tents and a stage for musical performances had been set up. The two central demands of demonstrators, which served as protest chants during the rally and were also printed on signs handed out to participants were for an end to the Asia Cement mine and reform of the mining industry, but more general demands underlying the demonstration were the call for broader environmental protections in Taiwan and social justice for Taiwanese indigenous. 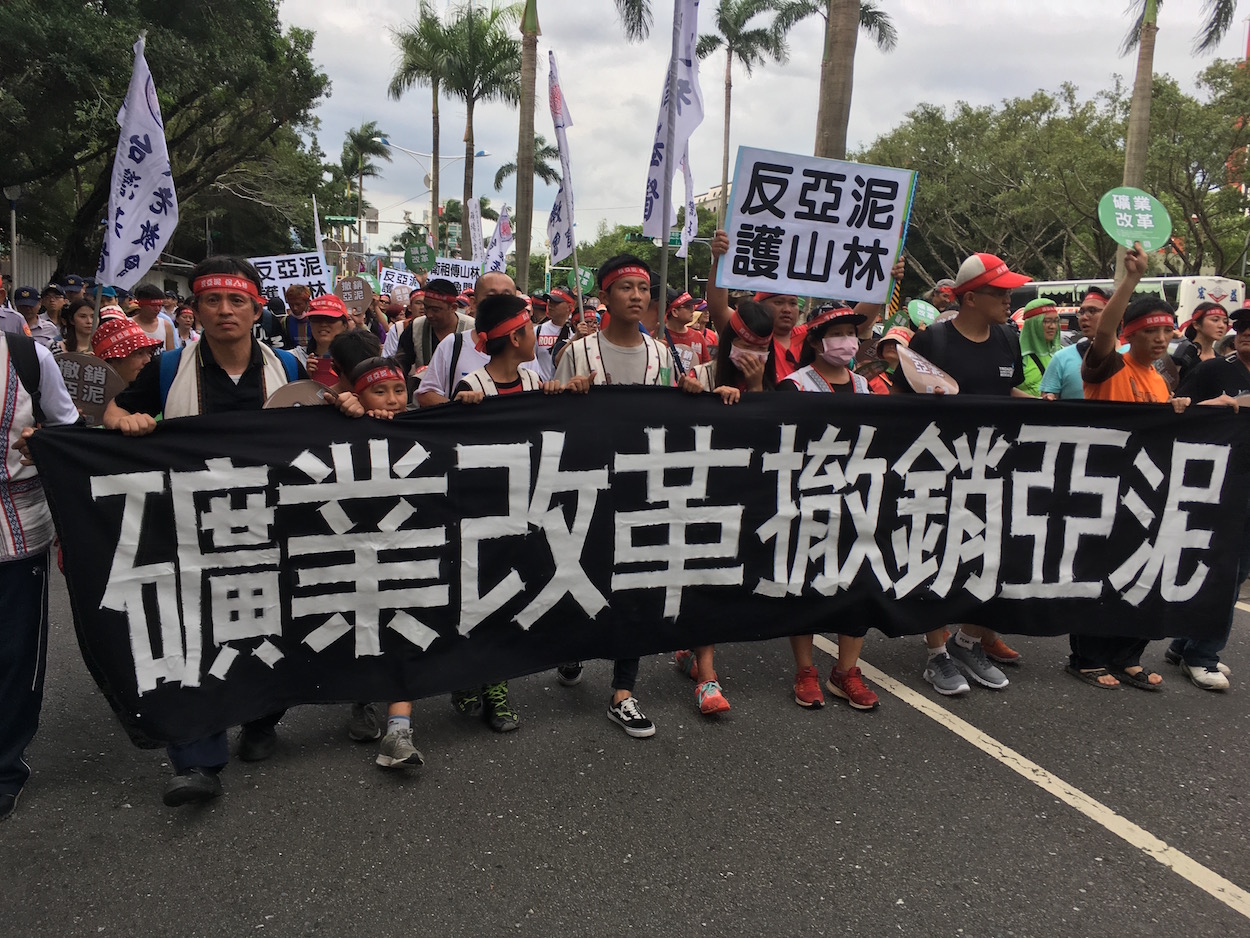 Apart from speeches and musical performances, demonstrators set off smoke bombs and played sounds of mining in front of the Executive Yuan to represent the loud noises which are constantly produced by the Asia Cement mine, in spite of the constant disruption to the lives of indigenous residents living nearby. On Ketagalan Boulevard, demonstrators formed the shape of the island of Taiwan, citing recently deceased director Chi Po-Lin’s documentary Beyond Beauty: Taiwan From Above, and the need to defend protect Taiwan’s environment as a whole. Participating organizations include Third Force parties such as the New Power Party, Social Democratic Party, Green Party, and Trees Party, a number of environmental organizations as the Green Citizen Action Alliance, Citizens of the Earth, Taiwan, the Taiwan Tongzhi Hotline Association, indigenous organization such as the Indigenous Youth Front, a leading force in many recent indigenous demonstrations, and other organizations.

Asia Cement’s mine on Truku indigenous lands is one of the long running issues in the struggle for social justice for indigenous in Taiwan going back several decades, as an emblem of the injustices the ROC government has inflicted upon Taiwanese indigenous. While Truku indigenous, as with other indigenous communities, should by constitutional law hold the rights to their land, oftentimes it is that Taiwanese business take advantages of legal loopholes to appropriate indigenous land for commercial development, sometimes with the backing of the local government. 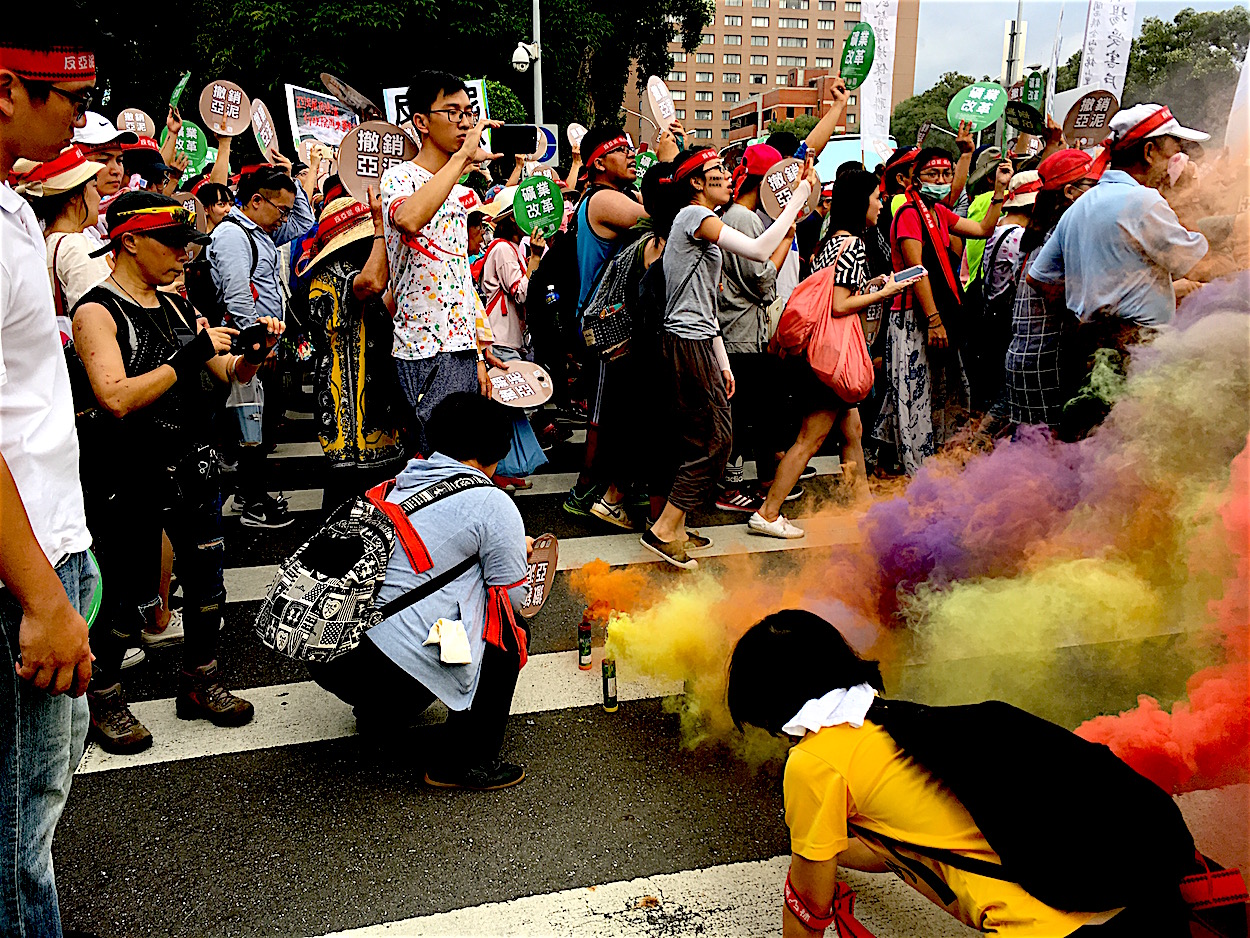 Smoke bombs being set off outside the Executive Yuan. Photo credit: Brian Hioe

This would certainly seem to be the case with Asia Cement’s mine in Taroko National Park, in which suspicions have been raised about the legitimacy of the documentation with which Asia Cement justifies ownership over the land, and in which the Truku people have been unable to achieve the restoration of their land rights because ROC government actors have shunted responsibility for who has jurisdiction over the land between the local, county, and central government. In this light, Asia Cement’s development in Taroko National Park goes back to the long history of indigenous being forced off of their lands by Han Taiwanese, seeing as it is very likely that any “documentation” from several decades ago supposedly proving that the Truku people agreed to give up their lands to Asia Cement may have been bound up with forcible coercion from government or commercial actors. Accordingly, the legal case filed against Asia Cement has lasted over fifteen years without firm resolution, including past attempts by the government to pass off a false resolution to the issue, low settlement payouts to affected residents of the area even in cases of deaths caused by accidents from the mine, and pollution to the drinking water of local residents.

As always, rampant developmentalism and the crony capitalism of local government actors willing to work with corporations for their personal benefit remain unresolved issues in Taiwan, and all the more so when it comes to Han Taiwanese treatment of Taiwanese indigenous. The Asia Cement mine proves not only disruptive of the daily lives of the Truku and a violation of their sovereign rights, but also destructive of the environment in which they live in though the gradual scraping away of the mountain they live on, and is symptomatic of the broader damage to Taiwan’s environment caused by commercial development. 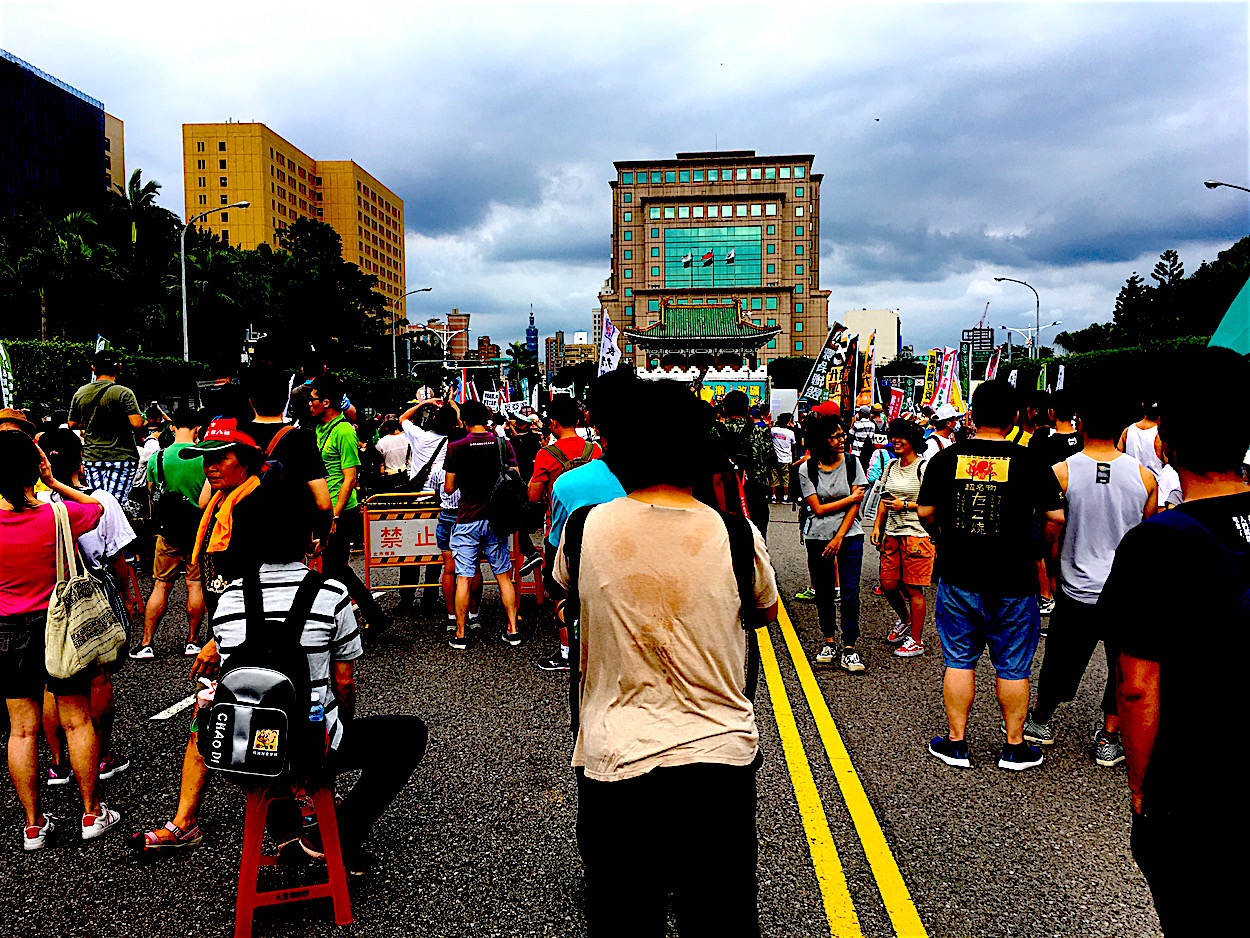 The systematic injustices against Taiwanese indigenous in the past came at the hands of the ROC state and past exploitation of Taiwanese indigenous by Han Taiwanese businesses was oftentimes carried out with the aid of local KMT government officials, a means by which the KMT serviced the clientelist business networks which provided the vital support they needed to stay in power during the authoritarian period. However, as demonstrators also pointed out during the demonstration today, while the Tsai administration promised to realize transitional justice for Taiwanese indigenous, it, too, has not taken substantial action to benefit Taiwanese indigenous with continued back-and-forth on the Taroko Gorge mine since it took power.

Indeed, despite the high-profile apology to Taiwanese indigenous on behalf of the ROC government in August of last year, demonstrators have in past months been demonstrating the failure of the Tsai administration to restore full traditional lands rights to Taiwanese indigenous by failing to restore lands which are currently privately owned. Indigenous demonstrators had been holding an occupation for over 100 days on Ketagalan Boulevard before this was forcibly evicted by police, leading to a relocation of the occupation to NTU Hospital Station. The occupation has now lasted over 120 days. As such, demonstrators today more broadly accused the Tsai administration of failing it to distinguish itself from past KMT administrations, and also acting in a way as to only benefit large corporations. 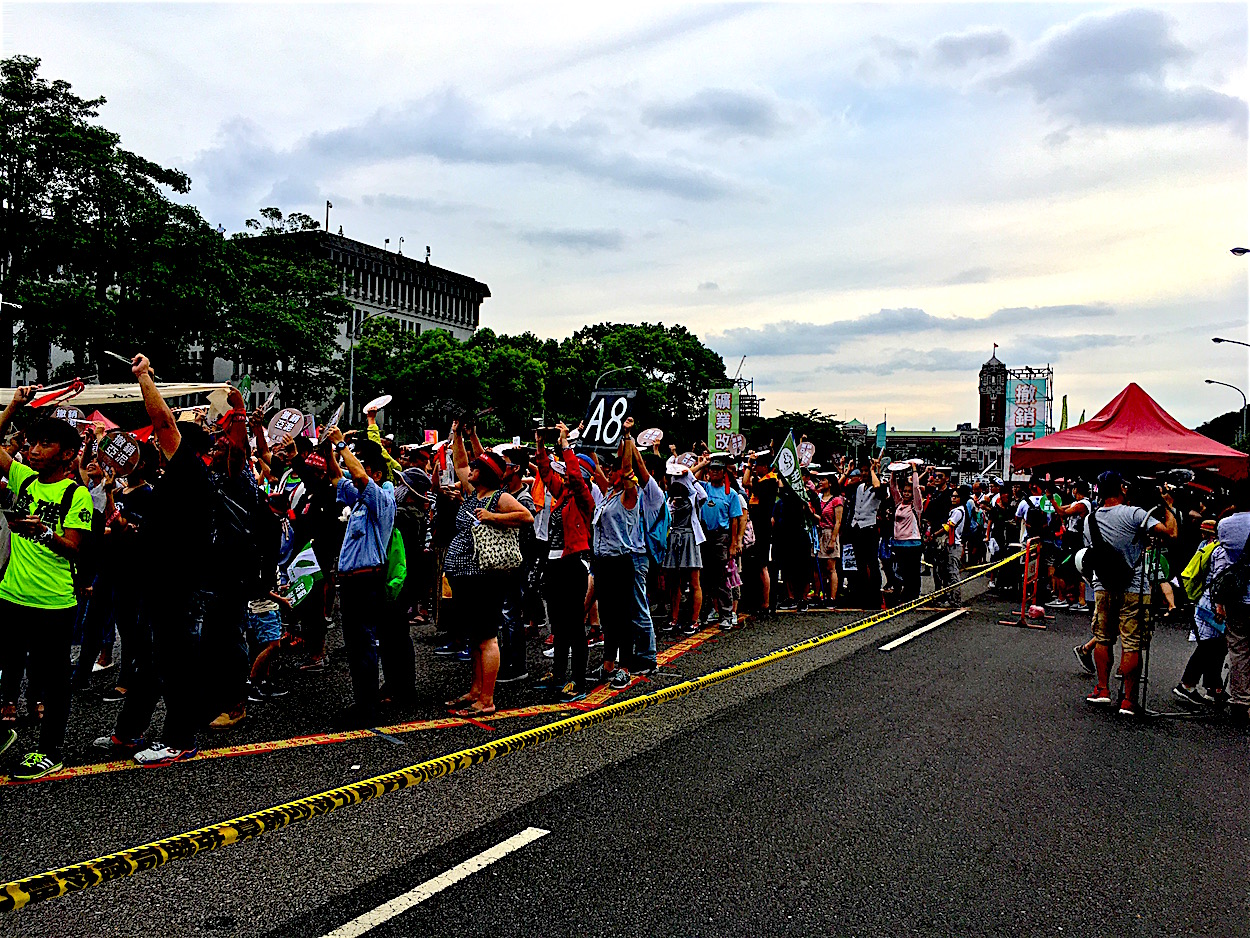