More Backsliding By The Tsai Administration On Labor Reforms?

THE TSAI ADMINISTRATION may be headed for a battle regarding labor reforms once again, with the administration mulling whether to make changes to recent reforms which cut seven public holidays and mandated one set day off as well as one “flexible rest day” in which workers can still made to work every week. This comes only about six months after such policies were put into place and the Tsai administration may only be inviting trouble to shift policy again so soon.

Labor unions mostly led by Taoyuan-based labor unions and the Workers’ Struggle collective demonstrated for over a year against cuts to public holidays and called for two set days off for workers per week, including numerous demonstrations, multiple hunger strikes, and an attempt to invade the Ministry of Labor. In particular, Taiwanese workers already work some of the longest hours in the world, having the fourth longest working hours in the world in 2016 according to the Ministry of Labor. But while labor unions might have welcomed changes by the Tsai administration to labor policy if this meant a reversal of course, Taiwanese labor has now found itself in the strange position of demonstrating to preserve the labor reforms they demonstrated so vehemently against.

Namely, while Taiwanese labor unions were unhappy with the labor reforms, it seems that unhappier still were big business owners who felt that the Tsai administration’s labor reforms gave too much to workers. As such, although the Tsai administration’s labor reforms would have provided some protection for workers from being forced to work overtime on their days off, amendments to the Labor Standards Act introduced by DPP legislators would dismantle part of these protections. 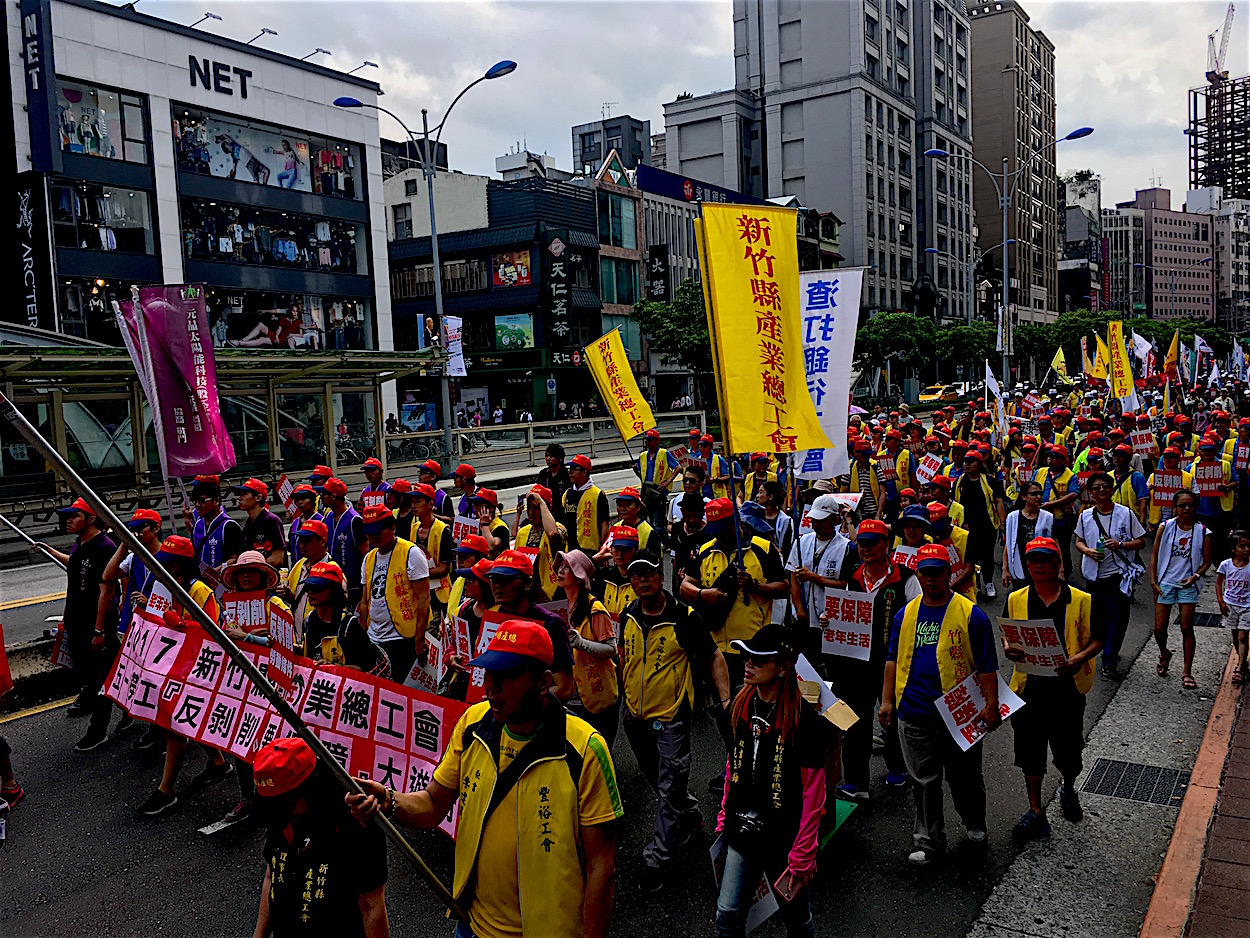 Likewise, with current DPP pension reforms to prevent the pension system from going bankrupt, apart from cutting the generous pensions given to public servants, teachers, and members of the military as a reward for political loyalty during Taiwan’s authoritarian period, measures have also been introduced to cut benefits for private sector workers. While cuts to pensions for public servants, teachers, and the military are an attempt to resolve part of the legacy of Taiwan’s authoritarian period, seeing as the pension system was the way the KMT bought the political loyalty of those who served it during the period of one party rule, with the claim that benefits for private sector workers must also be cut to prevent Taiwan’s pension system from going bankrupt in the next decade, nowhere is the idea raised to tax the wealthy in order to rescue the pension system. In this way, the Tsai administration not only fails to provide fundamental guarantees for long-term livelihood of Taiwanese workers, but, as with other labor issues, remains firmly beholden to big business leaders and the wealthy. 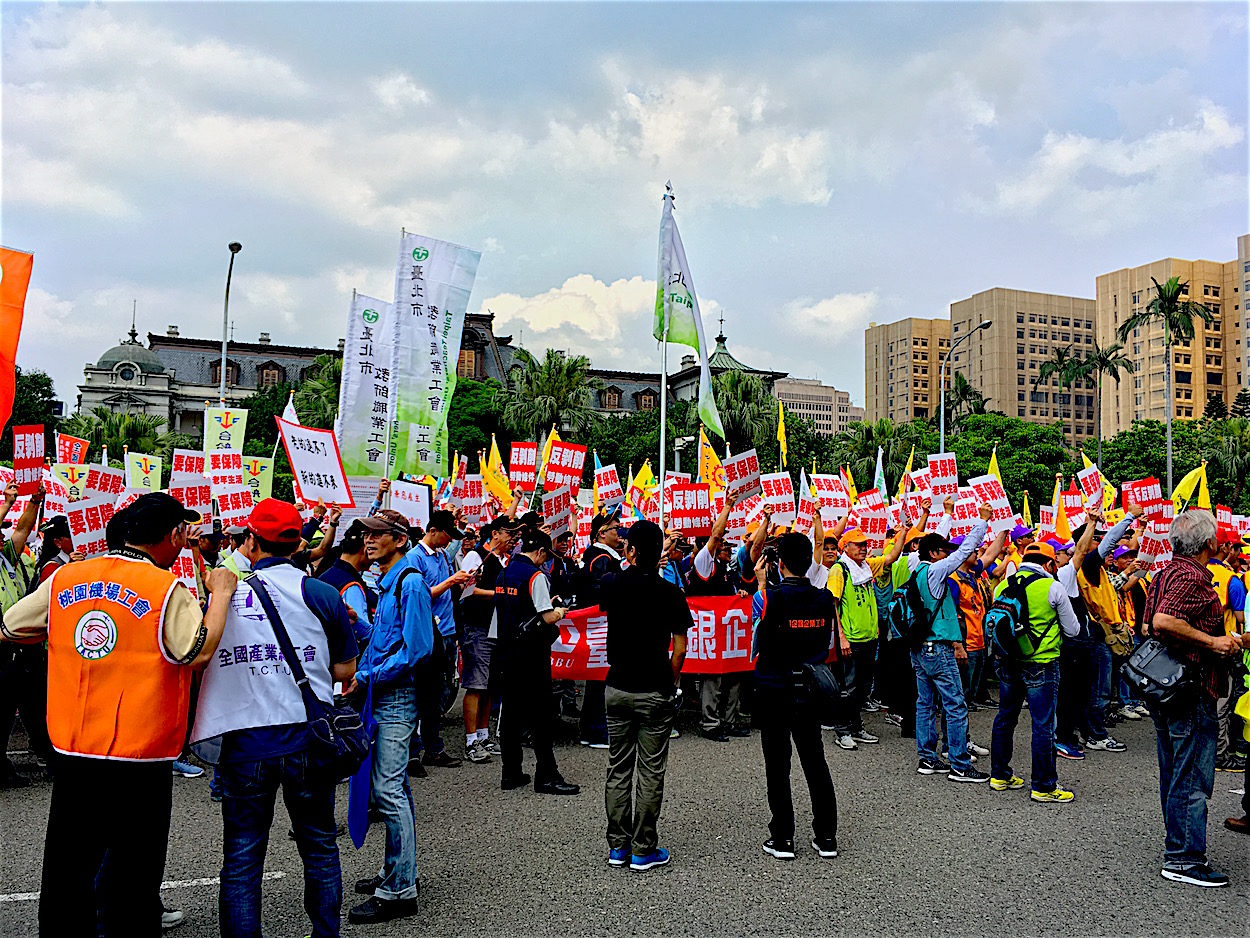 Likewise, as many companies took steps to restructure ahead of time in preparation for new labor regulations, the Tsai administration’s indecision on whether it would go with the demands of big business or of labor unions caused large disruptions in many industries, affecting a significant section of the Taiwanese workforce. This is one of the major factors behind Tsai’s current declining approval rating. The Tsai administration’s popularity would have probably been better served to have simply gone with the demands of big business from the beginning, rather than wobbling uncertainly on the issue and, not only further angering organized labor groups, but causing large social disruption through its indecision.

As a result, the failure of the Tsai administration to realize the rather basic fact that changes to labor policy stand to affect all of working Taiwanese society and that mishandling such policies would lead to widespread public backlash. And it still seems to have not understood this fact if, only about six months after labor reforms were passed, it is now mulling whether to further acquiesce to the demands of big business, something which has the potential to cause not only further outrage but further widespread social disruption. Indeed, the issue is severe enough that some calls have taken place within the DPP among DPP party officials to withdraw from the party if the Tsai administration goes ahead with retracting its labor reforms. Namely, some members of the DPP probably realize that the Tsai administration will almost certainly face widespread backlash if it acquiesces to big business leaders in retracting labor reforms. That much is simply political rationality.

And so is the DPP setting itself up for a fall? That remains to be seen. It may be the NPP, which was opposed to the DPP’s labor reforms from the beginning and supportive of the demands of organized labor groups, that ultimately reaps the benefits from the DPP’s miscalculation of the issue. However, that remains to be seen. In the meantime, there is much room for miscalculation on the part of the DPP and the DPP seems as of late to be stumbling over a large host of issues all at once.