THE BALL IS back in the DPP’s court regarding marriage equality in Taiwan. Namely, after the ruling of the Council of Grand Justice’s yesterday, the legislature will need to amend Taiwan’s Civil Code to allow same-sex marriage within two years. But this opens the way for backsliding by a DPP legislature which has already proven recalcitrant on the issue. It continues to be a possibility that the DPP will amend the Civil Code in a way which does not grant same-sex couples the same rights as their heterosexual counterparts, such as denying them the right to adopt, to make medical decisions for their party, or inherit property. And the DPP may try to pass this off as “marriage equality.”

We see early signs of the DPP dragging its feet on the issue with DPP caucus whip Ker Chien-Ming stating that the DPP will need to wait for the Executive Yuan to make its own proposal before the Legislative Yuan is able to. This response is not surprising, seeing as Ker led reversals on the issue of marriage equality by DPP legislators. But this unenthusiastic response is still somewhat surprising, seeing as DPP legislators may wish for Taiwan to gain international recognition as the “first country in Asia to legalize gay marriage” as a way of distinguishing Taiwan from China, and a large amount of international attention has focused upon Taiwan after the ruling.

Tsai Ing-Wen’s response, which took the form of a brief message posted on Facebook, was similarly uninspiring. A campaign promise to realize marriage equality was instrumental in Tsai constructing an image for herself as a candidate of hope and change during 2016 presidential elections, but Tsai backed away from the issue, probably with the view that it was politically unsafe for her to continue to endorse marriage equality in the face of opposition from religious groups and elements of her own party. While this was illustrative of the fact that Tsai only endorsed marriage equality because it seemed a politically safe issue, it also noteworthy that Tsai did not attempt to jump back onto the bandwagon in spite of the large amount of media attention which has ensued since the ruling. Very probably, elements of the DPP had never been fully in support of gay marriage from the beginning, seeing as the Presbyterian Church has a strong presence in the DPP, and whether in Taiwan or internationally, the Presbyterian Church is divided on the issue of gay marriage.

As such, that Tsai’s only comment was a stern remark on Facebook stressing that the proper legal mechanisms have now decided that marriage equality is to be the law of the land and calling on all citizens to respect this is telling this. While, on the surface, Tsai’s comment seems to be directed towards anti-marriage equality protesters who have at times proved violent, a close reading of Tsai’s comment also suggests that this is also directed at the recalcitrant members of the DPP who broke from Tsai’s campaign promises to legalize marriage equality and calling on them to fall in line. An English translation of this comment was later posted on Tsai Ing-Wen’s Twitter, although the language of the statement strongly suggests that the statement was written first in Chinese, primarily directed towards a Taiwanese audience, and written without much thought to how an international audience would react to it.

But this comment also does not seem to indicate as though the executive branch of government is particularly enthusiastic about passing marriage equality into law either and its wording indicates that if DPP members of legislature continue to put up a show of resistance to marriage equality, there is still wiggle room for them to push back against the Council of Grand Justice’s decision. It would be far more effective for Tsai to leverage on popular support of marriage equality and the international attention Taiwan is currently receiving as a result of the ruling to force recalcitrant members of the DPP to fall in line, but in line with her leadership style as “negotiator” more than anything else, Tsai still seems to wish to rationally persuade recalcitrant elements of the DPP to agree to legalize marriage equality. 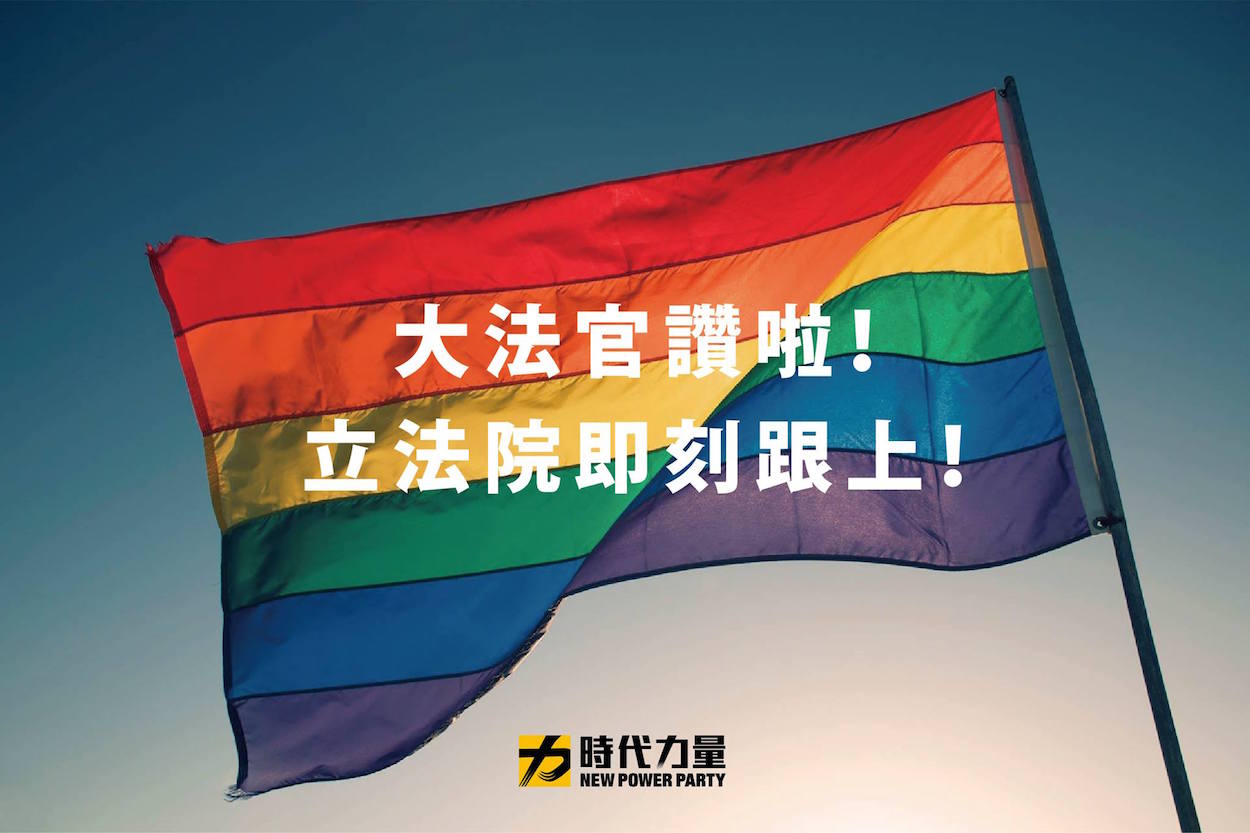 But with uninspiring responses from both Tsai Ing-Wen and DPP legislators which, in fact, fail to leverage on the current international attention that Taiwan is receiving after the Council of Grand Justice’s ruling, the position of more progressive parties within the pan-Green coalition has been strengthened. NPP chair Huang Kuo-Chang, for example, is currently facing a recall vote organized by anti-marriage equality protesters who target Huang in particular because of his and the NPP’s consistent and adamant support of marriage equality throughout.

Relations between the NPP and DPP, frenemy parties within the pan-Green camp, have taken a sharp turn for the worse because of the NPP’s more progressive stance on a host of issues including gay marriage and labor reform, and party leader Huang Kuo-Chang’s willingness to antagonize DPP heavyweights as DPP caucus whip Ker Chien-Ming. This has led to conspiratorial accusations by Ker in the past claiming that the NPP was orchestrating protests to undermine the DPP.

Due to these worsening relations, with the recall vote that Huang is currently facing, it was a open question as to whether the DPP would continue to endorse the NPP, as it did during 2016 elections. This endorsement of the NPP by the DPP was an initiative of Tsai Ing-Wen’s to attract the post-Sunflower youth activists in an attempt to build an image of hope and change for her campaign, but as with support for marriage equality, not all elements of the DPP were onboard with this plan. 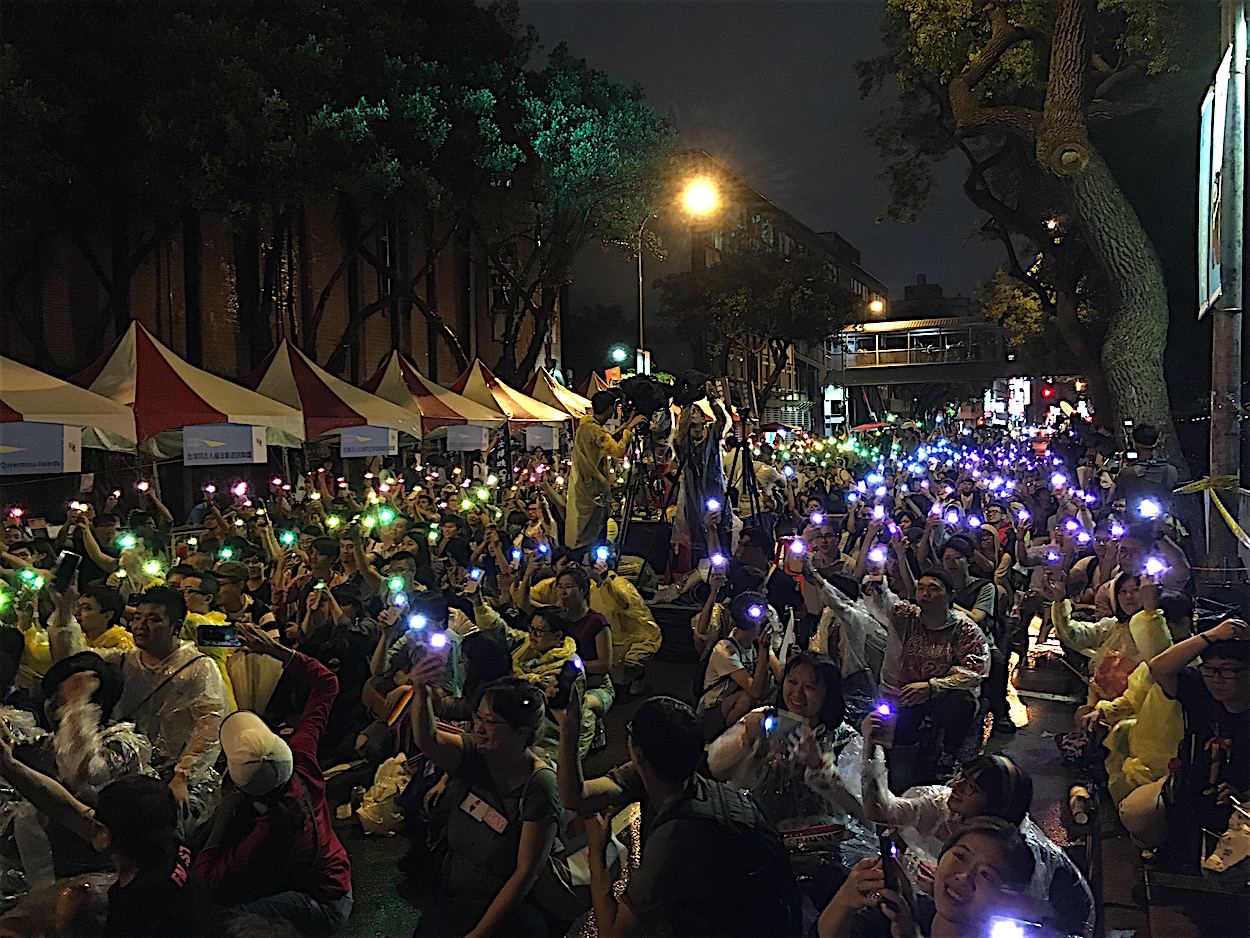 Photo of the ‘Light Up Taiwan’ activity which concluded yesterday’s rally outside the Legislative Yuan, in which participants held up their cell phones to project the colors of the rainbow. Because “Light Up Taiwan” was Tsai Ing-Wen’s campaign slogan, the idea was to call upon the DPP to live up to past promises. Photo credit: Brian Hioe

However, where rivalries within the pan-Green camp are concerned, the DPP’s position is now significantly weaker following the ruling, since it has to change the Civil Code no matter what, but its decidedly uninspiring response allows the NPP to seize the mantle of being the party of hope and reform. Obviously, it remains that the NPP is a small party with only five legislators and limited resources, which is dwarfed by the DPP, but the DPP’s lackluster response more or less allows the NPP to eat the DPP’s lunch in front of it. The NPP is placed in a position to benefit from continued public attention that the issue of marriage equality receives, then, given its consistent and unwavering support of the issue throughout.

Other challenges remain. The ruling of the Council of Grand Justices’ takes responsibility off of the shoulders of the legislature in some sense, since this provides justification for recalcitrant DPP legislators to justify flip-flopping on the issue yet again in claiming that, because this is the justification of the Council of Grand Justices’, they have no choice but to legalize marriage equality. But opposition to marriage equality may be rather deeply rooted within the DPP, a way in which the attitudes of the DPP internally may be more conservative than those of Taiwanese society writ large. It is not just DPP caucus whip Ker Chien-Ming who opposed gay marriage, for example, but also Minister of Justice Chiu Tai-San, who appeared in a previous hearing to argue against gay marriage by citing the sanctity of Chinese tradition. Other important figures within the party, such as former vice president Annette Lu, have also expressed opposition to gay marriage within the past and in past years members of the LGBTQ community sometimes perceived the DPP as hostile towards them.

It remains to be seen how deeply rooted opposition to gay marriage within the DPP is, then. But either way, the ball is in the DPP’s court now. As such, with the shifting of the battleground to legalize marriage equality back into the legislature, LGBTQ groups and their allies will need to focus their efforts on the DPP next. Means need to be found to place pressure on the DPP to pass marriage equality into law in a manner which is not simply an attempt to pass off civil partnerships as marriage equality or otherwise to continue to deny rights to members of the LGBTQ community.