ATTEMPTS BY members of the KMT to storm legislature in protest over the Tsai administration’s pension reform efforts took place early this morning, following on the heels of a nightlong demonstration last night in which it is reported approximately 600 individuals were in attendance. Many of these demonstrators appear to have been former military personnel from the Huang Fu-Hsing branch of the KMT. The Huang Fu-Hsing branch of the KMT consists of former military personnel and their family members and they have been vocal in opposition to pension reform from the DPP-led administration because of the fact that this will affect their retirement benefits. Members of the Huang Fu-Hsing branch of the KMT, who are usually quite elderly, have been camped outside the Legislative Yuan for months. However, former police officers have also been active in demonstrations, seeing as they stand to be affected by pension reform as well.

With pension reform slated to be reviewed in legislature, protest was expected, as a result of which barriers were installed around the Legislative Yuan were ordered to remain in place. Yesterday night saw the deployment of over 2,000 members of the police to maintain order. Today’s demonstration was particular controversial due to acts of violence from members of the Huang Fu-Hsing targeting legislators in favor of pension reform, with police sometimes allowing protesters to get dangerously close to legislators as they attempted to charge the legislative or assault legislators. Among those attacked include Hsu Yung-Ming of the NPP, DPP legislators Wang Ding-Yu, Lin Chun-Hsien, Tsai Yi-yu and even Taipei mayor Ko Wen-Je. 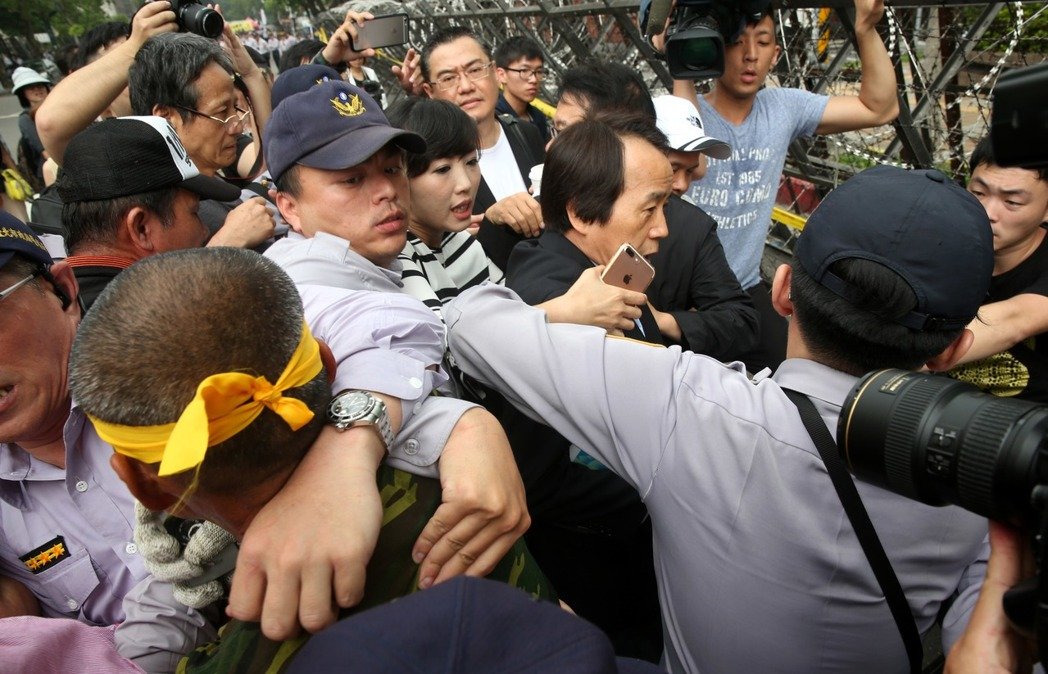 Yet while escalating actions from anti-pension reform protestors are possible with continued discussion of pension reform in legislature, one really does not expect the issue to catch on with mainstream society. The KMT’s actions as of late seem aimed at imitating Taiwanese youth activism in hopes that adopting similar protest tactics will allow their issues to become taken up by mainstream society. This is not only through attempting to storm the Legislative Yuan in a manner reminiscent of the Sunflower Movement occupation, which also was a reaction to the review of the CSSTA trade agreement when it came up for discussion in legislature. Attempts to storm the Legislative Yuan have been attempted by members of the KMT in response a host of issues ranging from pension reform to American pork imports. But this is also through holding an occupation outside the Legislative Yuan similar to the occupation which has been maintained for several years by the Alliance of Referendum for Taiwan, which calls for referendum as a way to settle the issue of Taiwanese independence. Members of the pan-Blue camp have taken to imitating the tactics of Taiwanese youth society in recent times, seeing their loss of public support as a failure of form, rather than of the content of their politics failing to appeal to contemporary Taiwanese society.

Sunflower movement leaders such as Chen Wei-Ting, however, have made public statements commenting on the false comparison between the Sunflower movement and these demonstrations, raising that the Sunflower movement did not take to physically attacking their political enemies the way that pension reform demonstrators have. Some members of civil society have also expressed disgust at the actions of the police, expressing the view that police may be on the side of the Huang Fu-Hsing, again, because they are civil servants who also stand to be affected by pension reform.

Nevertheless, there would be a sharp difference between protest by Taiwanese youth activists demonstrating the undemocratic actions of the KMT and protest by the geriatric who may view the actions of the DPP as undemocratic, but are in many ways calling for the preservation of the privileged roles they enjoy in society even if this stands to impact the rest of society negatively. Members of the military, public servants, and teachers constituted a privileged class under KMT authoritarian rule, seeing as the state generously rewarded those who were loyal to it. 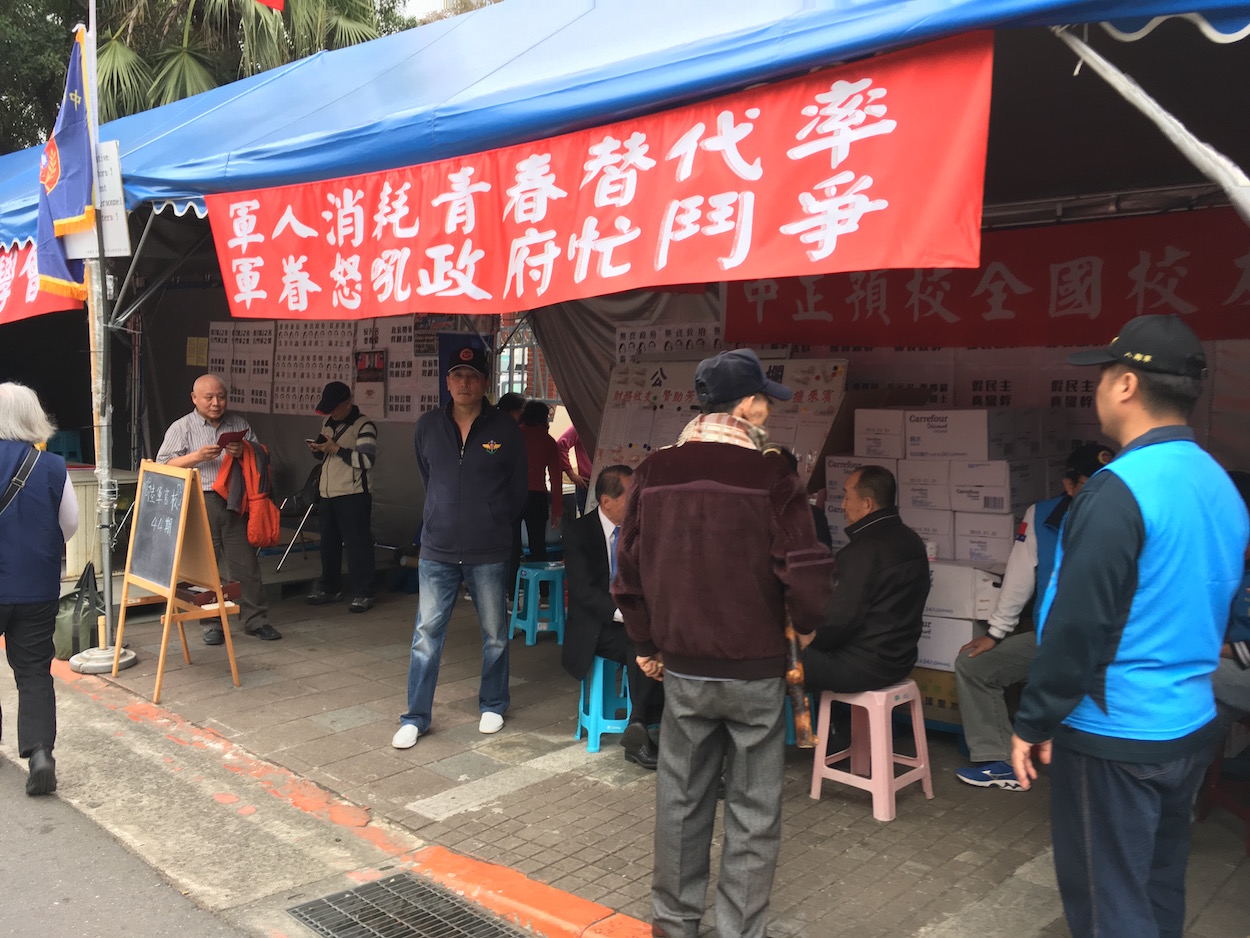 If the public at large would probably be more sympathetic to public servants and teacher demonstrating against the repeal of the pension benefits they were promised early in their careers, the Huang Fu-Hsing is decidedly out of step with the sentiments of the contemporary Taiwanese public. Members of the Huang Fu-Hsing are homogeneously waishengren and in many cases are old enough that they may have actually been born in China.

As a result, the Huang Fu-Hsing’s demonstrations against the DPP-led administration mix in the KMT’s Chinese nationalism to an extent which cannot help but be repulsive to most members of the Taiwanese public, with protest slogans not only calling for opposition to pension reform but also unification with China, accusing the DPP of stirring up “populism” among the Taiwanese populace in order to turn them against China, and calling on civilians to always respect the soldiers who protect them. Indeed, evidencing a generally undemocratic worldview which harkens back to KMT martial law among anti-pension reform protesters, during which they often served as the enforcers of the KMT party-state, members of the KMT with a background in the police have also made the news recently for calling for Tsai’s assassination because of her push for pension reform. 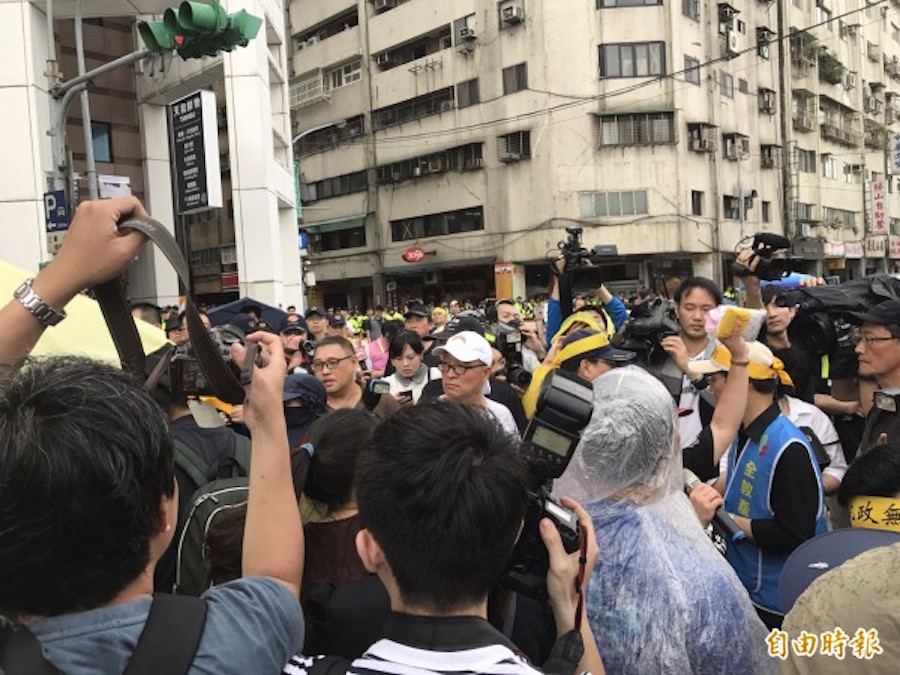 The public also oftentimes perceives members of the military, public servants, and teachers as having cushy jobs because of their ties with the state and resents them their generous pension packages. This is not always a fair view, given that public servants and teachers oftentimes work long hours for little pay to begin with, never mind their pension packages. And there are other solutions to pension reform than cutting long-promised pensions which could be proposed such as, for example, raising taxes on the wealthy. However, anti-pension reform protesters have not helped their image through comments suggesting that they are already very well off, but feel the need to demonstrate over a reduction in their pensions which would not really affect them anyhow. For example, today saw much public scorn over an anti-pension reform protester commenting that with cuts to his pension, he would not be able to hire an Indonesian housekeeper for himself.

It is such that one does not really expect anti-pension reform protests to grow, even if it remains a challenge for the DPP to try and push through pension reform while limiting public opposition. The possibility of further, more drastic action by demonstrators is possible. But even if their actions today have provoked much public discussion, the views of the anti-pension reform protesters are simply too much out of step with the sentiments of the public to have significant traction.