Still No Answers About The Kidnapping Of Lee Ming-Che

JUST OVER twenty days after the arrest and detention of Taiwanese human rights NGO worker Lee Ming-Che by Chinese authorities, little has been clarified regarding his abduction. On April 10th, Lee Ming-Che’s wife, Lee Ching-Yu, attempted to fly to China in order to search for her husband and to bring him his blood pressure medication, renouncing her right to a lawyer in doing so. Under the Cross-Strait Joint Crime-Fighting and Judicial Mutual Assistance Agreement signed between Taiwan and China, the relatives of arrested or detained individuals are allowed to visit them, but China has not continued to enforce this agreement with the deterioration of relations between Taiwan and China since the Tsai administration took office. However, Lee Ching-Yu did not even make it out of Taiwan, being informed at Taoyuan International Airport that her travel documents to China had been cancelled. Fears have also been raised that Lee’s detention may involve the use of torture.

Lee disappeared on March 19th while en route to Guangzhou from Macau. It is thought Lee’s detention may have to do with his former employment as a DPP staffer, his work as a human rights NGO worker, or weekly discussions about human rights he conducted on WeChat with Chinese friends. China’s motives for Lee’s detention are similarly unknown. Despite Lee being a low-profile figure, rather than a high-profile one, China may have wanted to send a message to Taiwan. Or Lee may have been simply caught in the crossfire regarding China’s crackdown on civil society groups under the Xi administration. 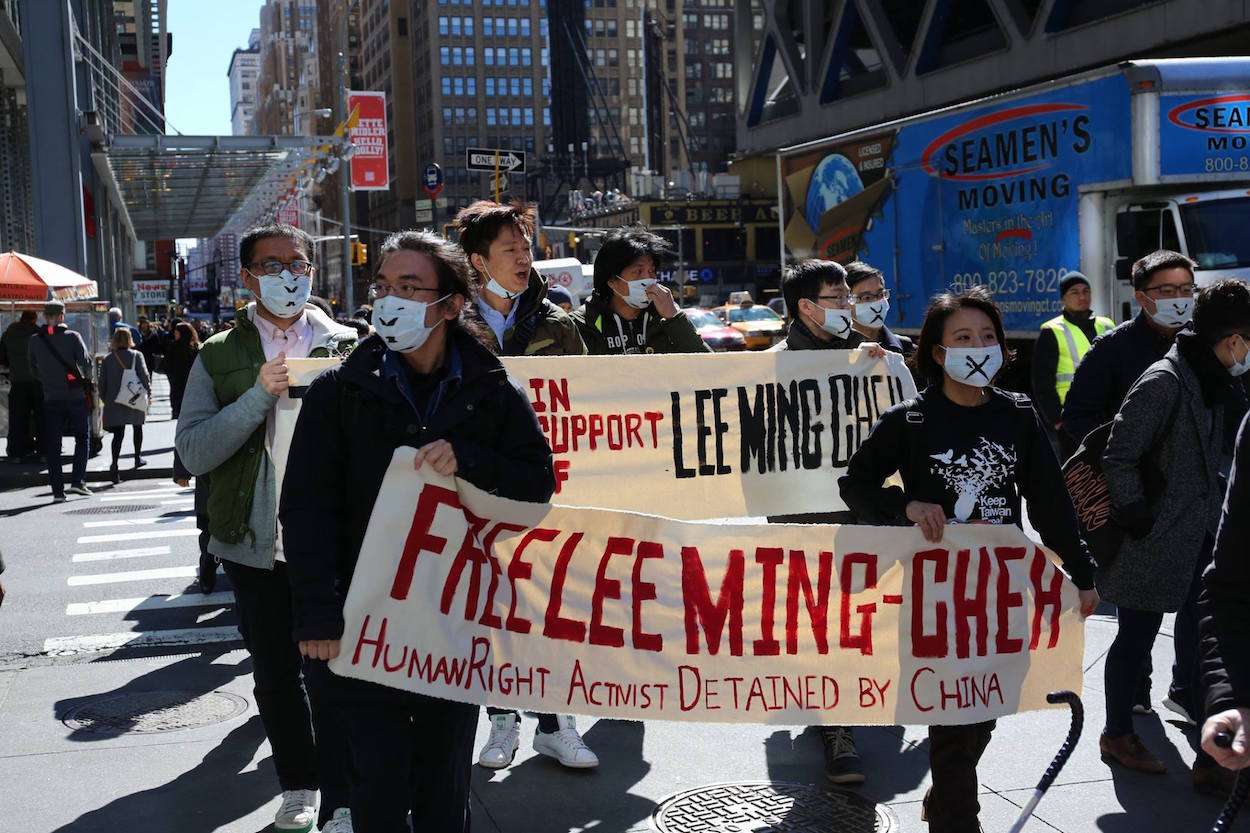 Lee’s detention came in a similar timeframe to the arrest of Chinese supporters of the Umbrella Movement in Guangdong, which adds weight to the suggestion that his detention was meant to send a message to Taiwan regarding its leanings towards political independence. Despite having sharply backed away from explicit advocacy of Taiwanese independence in recent years, worsening ties between China and the present DPP Tsai administration means that China continues to perceive the DPP as a pro-Taiwanese independence party.

It was probably no surprise to either Lee Ching-Yu or supporters of Lee Ming-Che that she did not make it out of Taiwan. The Chinese government would want to avoid the spectacle of Lee making a scene in Beijing in hopes of raising international attention about her husband’s plight. Likewise, the Taiwanese government probably would not have wanted Lee taking action on her own in China in a manner that might upset its attempts to keep stable its delicate relationship with China.

Lee Ching-Yu has also stated that she was contacted by Lee Chun-min, a Taiwanese man previously imprisoned for decades by the Chinese government for spying on China and a former aide of KMT central committee member Alex Tsai after being released, who told her in a letter that if Lee Ching-Yu  gave up plans of travelling to China, her husband would be released. However, if Lee Ching-Yu persisted in these plans, a televised extraction of guilt would be extracted from her husband in a similar manner to other arrested political dissidents in China, including Swedish NGO worker Peter Dahlin and Hong Kong booksellers who published books critical of Chinese leaders as Chinese president Xi Jinping. 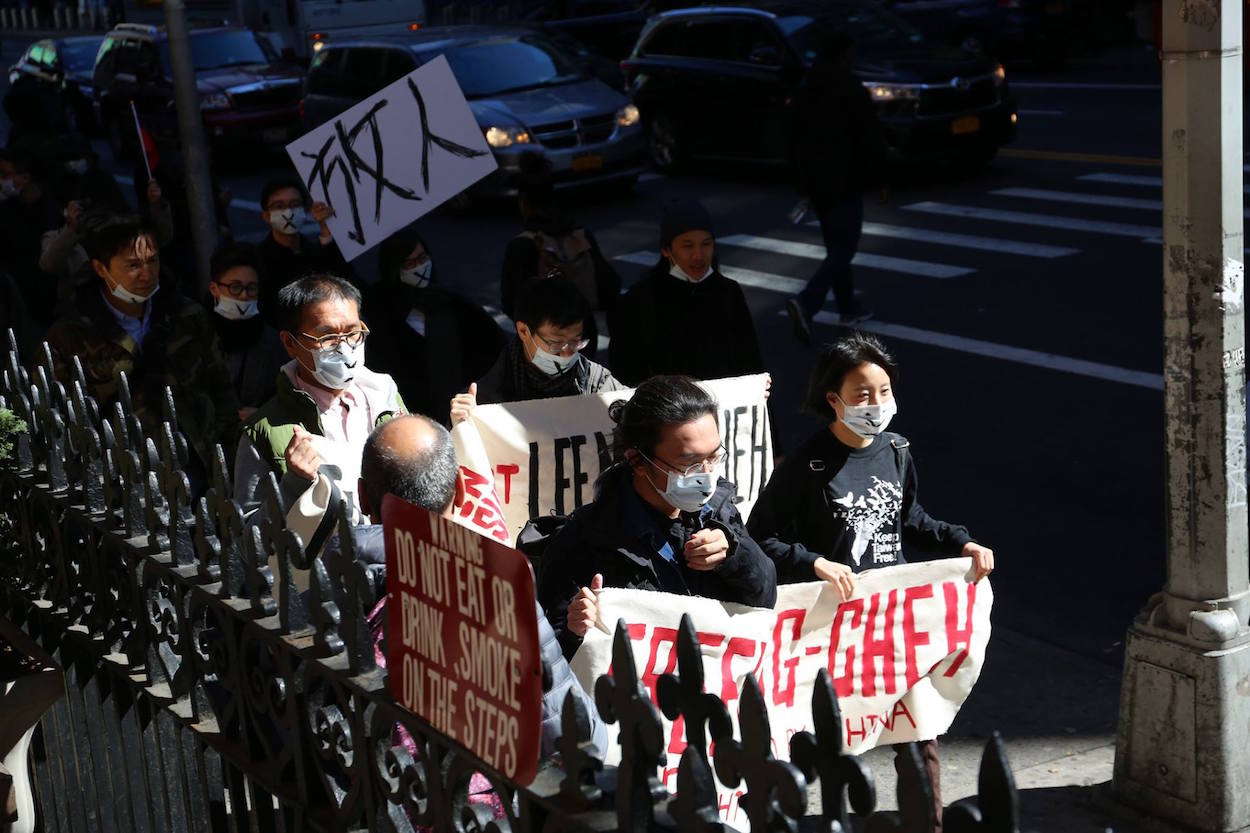 Lee Chun-Min claimed to be acting as a go-between for China’s Association for Relations Across the Taiwan Straits (ARATS), something which ARATS seemed to opaquely confirm through statements that it had sought to contact Lee Ching-Yu and the Lee family through intermediaries. Alex Tsai was also evasive, claiming that he had attempted to intercede through friends.

Lee Chun-Min himself later issued a statement, confirming his involvement in the case, but stating that he would be withdrawing now that his identity was out there in the open. Lee Chun-Min’s case is, frankly, a strange and ironic one in relation to the Lee Ming-Che case, seeing as he was imprisoned by China for 24 years and only released in 2006 on charges of spying some 12 years after being arrested by China in 1984 after a previous arrest in 1981 and being declared dead in 1994. Lee Chun-Min’s wife, who remains anonymous in the media, had in the past criticized the Ministry of National Defense for its unwillingness to clarify Lee Chun-Min’s fate for fear of disrupting cross-strait relations. Lee’s release was secured in part through the intervention of former New Party legislator Elmer Fung.

Lee Chun-Min may have interceded in the present case due to his loyalty to the KMT, due to having been asked to do so by Alex Tsai. It may have also been hoped that Lee would provide a negative example to Lee Ching-Yu. However, Lee Ching-Yu refused Lee’s help, claiming that Lee’s offer of “assistance” was really no better than a threat and rejecting the past practice of settling cross-strait matters through quiet negotiations behind closed doors. 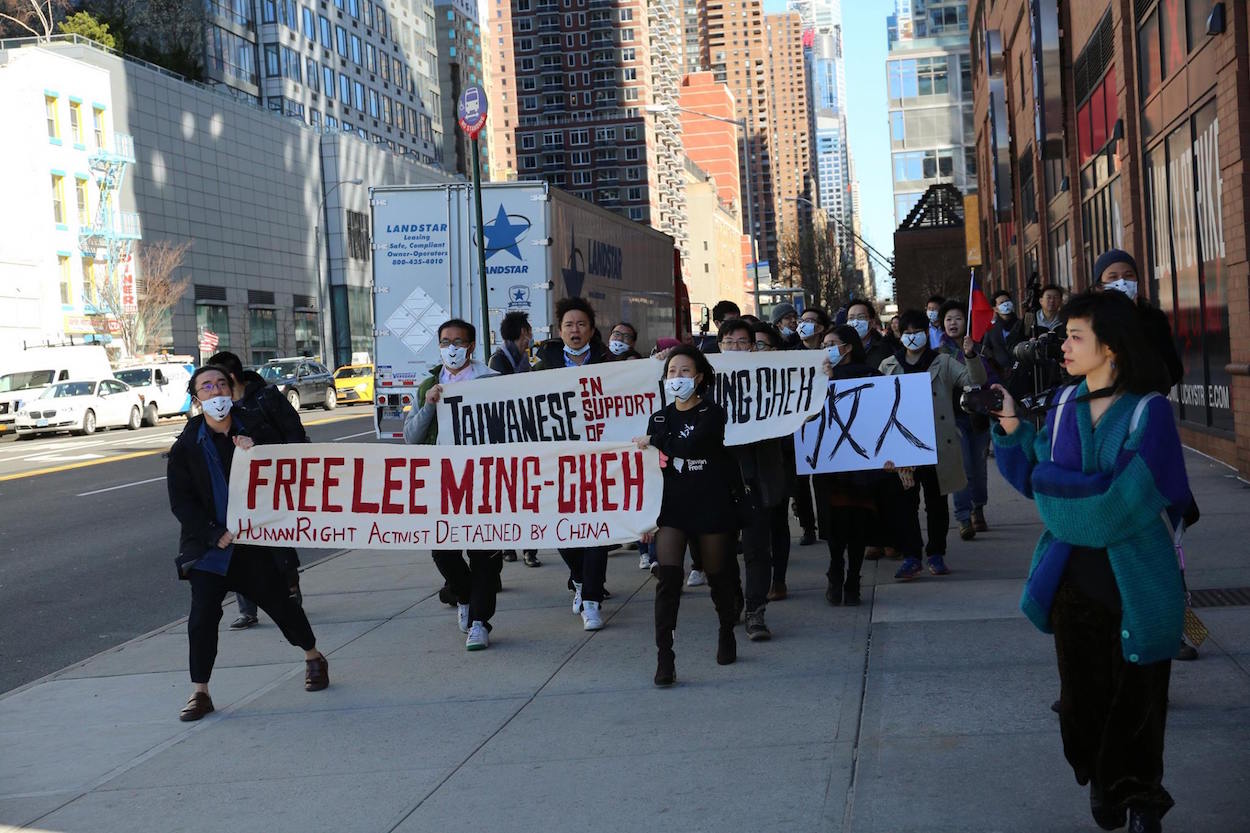 The Tsai administration and DPP has taken a muted stance on the matter through the lack of any real public statement by President Tsai Ing-Wen or Premier Lin Chuan, leaving it up to civil society groups to act on their own in conjunction with the Lee family. Likely the Tsai administration fears deteriorating cross-strait relations between Taiwan and China to an even worse point in the present. As a result, the Tsai administration has been criticized for its inaction on the case by individuals including former Sunflower Movement leaders as Lin Fei-Fan and Chen Wei-Ting.

On the other hand, the KMT has also remained rather quiet on the matter. The KMT could have easily claimed that Lee’s kidnapping was a matter which went beyond party bounds or in which China had gone too far and worked with the DPP to try and negotiate with China in a bipartisan manner. In fact, one imagines if the current leadership of the KMT was different, this might have been the case. But the current KMT party leadership consists of deep Blue ideological diehards such as Hung Hsiu-Chu and Alex Tsai. Hung and Tsai are well-liked in China and have the standing to potentially intercede on the matter. But Hung, Tsai, and cohort’s fervent pro-unification policies make the KMT’s pro-China position awkward when it comes to China kidnapping a Taiwanese citizen which is probably why they have also largely been silent.

Many things remain to be clarified about the KMT’s intervention in the present case. It may have been that Tsai hoped to capitalize on the case through securing Lee Ming-Che’s release to recoup political capital as supposedly the only political party in Taiwan able negotiate with the CCP due to their special historical relationship. Notably, the Tsai administration also seems to be convinced that the pan-Blue camp is better able to negotiate with China than itself, hence why it would appoint pan-Blue politicians such as the People First Party’s James Soong to act as Taiwan’s representative in the meetings of international bodies as APEC. However, it seems unlikely that members of the present KMT leadership would be willing to work with the DPP on any issues, even regarding a matter as severe as the kidnapping of a Taiwanese citizen by China. 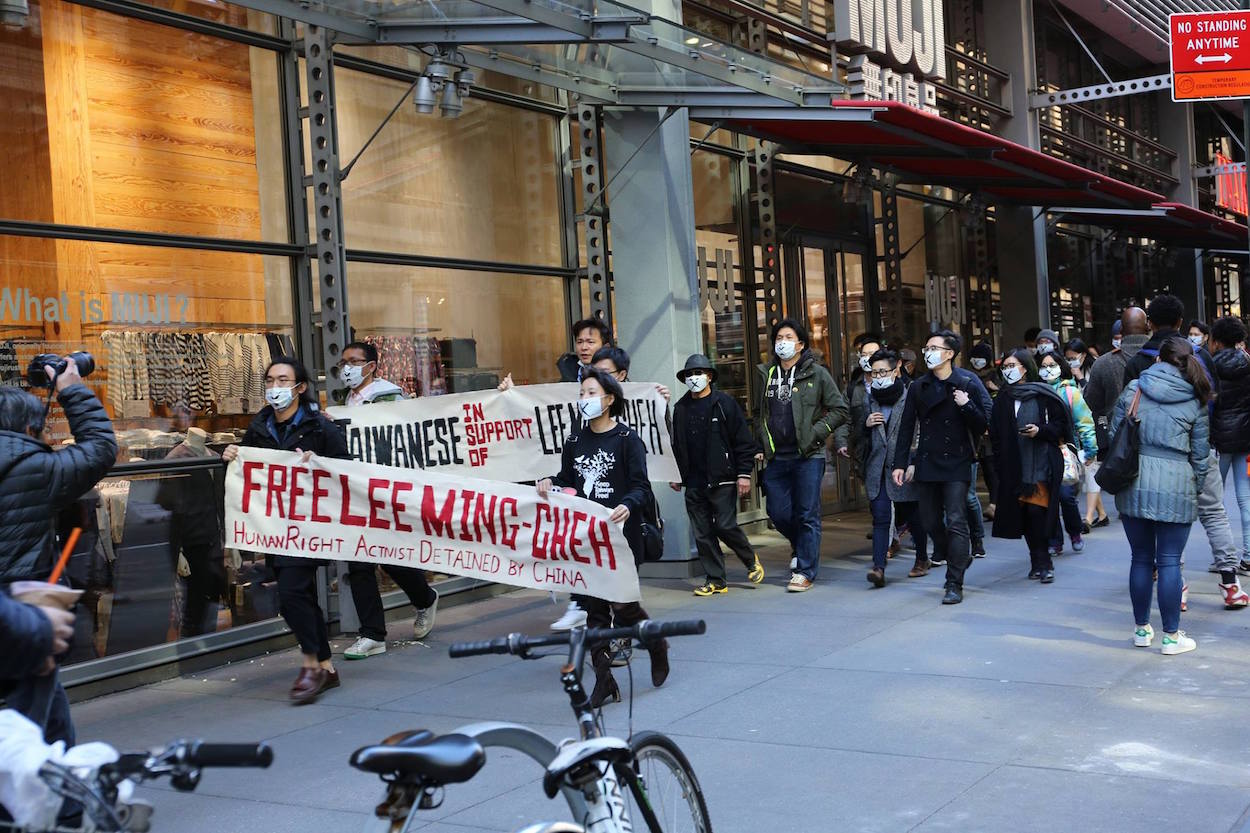 Civil society groups continue to organize, as evidenced in a recent rally of overseas Taiwanese in New York City calling for Lee’s release organized through networks which developed in America after the Sunflower Movement in 2014. Sunflower Movement leaders as Lin Fei-Fan and Chen Wei-Ting, in collaboration with Hong Kong’s Joshua Wong, the New Power Party, and other civil society groups, have also called for Lee’s release. A website, whereislee.org, has also been established to coordinate communications about actions, although only in Chinese so far.

Many calls for Lee’s release to date have directed their appeals to the American government to put pressure on China ahead of the Trump-Xi meeting last weekend, but as Taiwan did not come up at all during the meeting, this appeal to America was unsuccessful. Moreover, one does not expect the language of human rights to have much moral suasion on the Trump administration, whereas past American presidents were more amenable to appeals made on the basis of human rights. Unlike past presidential administrations, the Trump administration has notably backed away from criticizing China on human rights grounds, refusing to sign a letter signed by eleven other countries criticizing China for its human rights violations.

As past precedents of individuals kidnapped by China have involved long periods of detention, it does not look likely that Lee Ming-Che will be released anytime soon. The kidnapping of Hong Kong booksellers offers similar precedent, seeing as it took a long period of time before it even became clear on what charges they were being detained by China. Nevertheless, to raise further awareness of his detention internationally proves crucial at the present juncture. However, not only does the present disinterest of the US in criticisms of China on human rights grounds contribute to difficulties in raising awareness of the Lee Ming-Che case, but so too, does Taiwan’s general obscurity and its marginalization from the international community. What, then, for efforts to set free Lee Ming-Che?