A SMALL RALLY was held yesterday outside the Legislative Yuan to commemorate the three year anniversary of the beginning of the Sunflower Movement on March 18, 2014, with well over one hundred in attendance but not over several hundred. Prominent Sunflower Movement activists such as Chen Wei-Ting, Lin Fei-Fan, Huang Kuo-Chang, Dennis Wei, Lai Chung-Chiang, and others were present, although not all of them spoke, and the event was primarily moderated by Aman Wu of the post-Sunflower youth activist group Youth Against Oppression in Taiwan. Indigenous folk singer Panay Kusui, a prominent figure in ongoing indigenous demonstrations on Ketagalan Boulevard, also performed, speaking of her experiences during the Sunflower Movement, when she also performed on-site, and in which she observed the police violence that occurred on the night of March 23rd with the attempt to occupy the Executive Yuan. 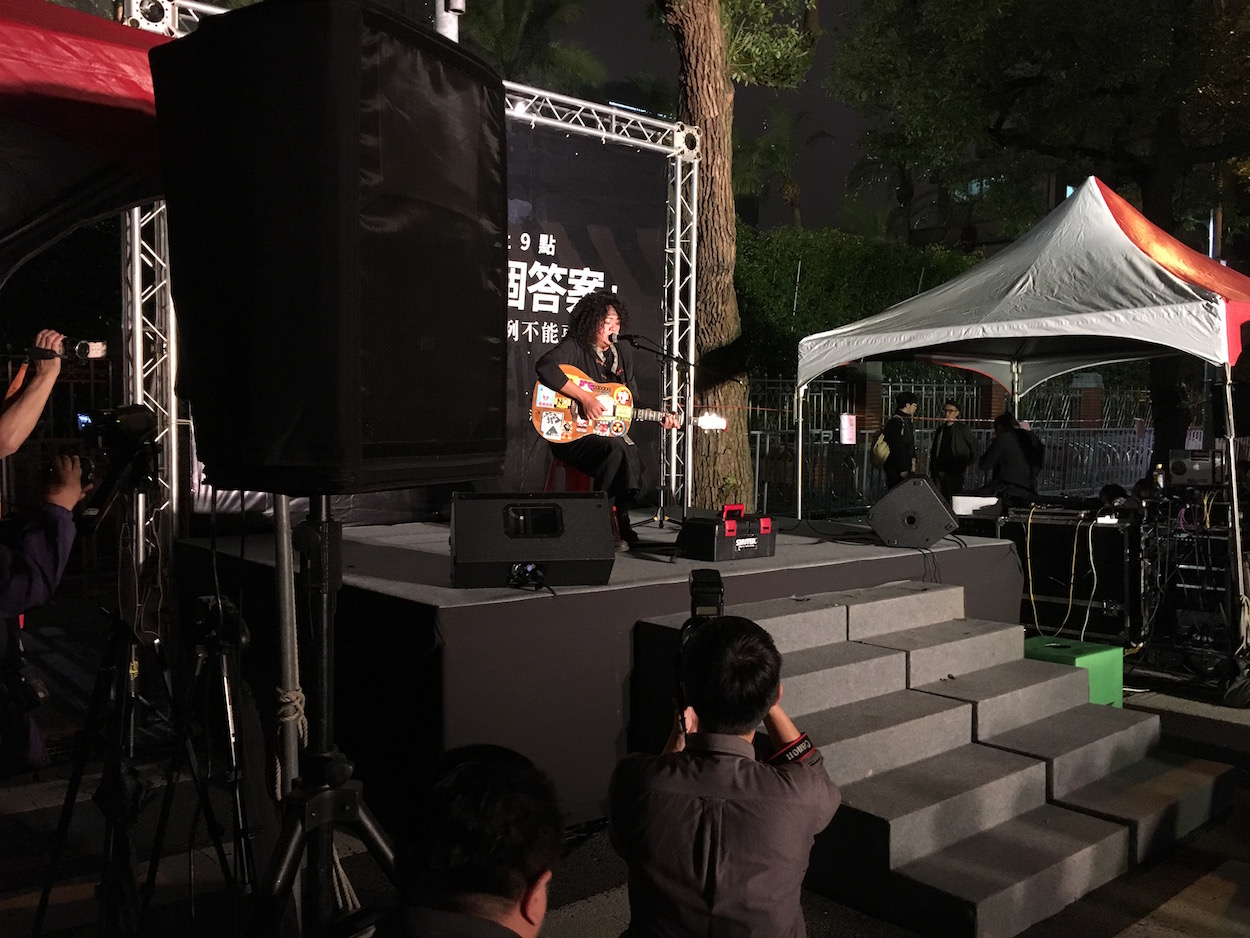 Sunflower activists primarily directed their criticisms towards the DPP during the rally, seeing as the Tsai administration has been in power for close to one year at this point. Activists criticized the stalling, backsliding, or reversals of the DPP on many of its promises, including its reversal on gay marriage, and its failure to take more substantive action on behalf of Taiwanese indigenous to better their situation after the Tsai administration’s official apology to indigenous on behalf of the government.

Moreover, returning to the central concern of the Sunflower Movement of trade deals with China which could threaten Taiwan’s sovereignty, the DPP was roundly criticized for its inaction to pass the oversight mechanisms into law which Sunflower Movement activists had called for to prevent deals as the CSSTA from being passed into law without due consideration of possible consequences. In particular, the DPP was criticized for its hesitancy to take concrete action on such matters once in office, raising the need to avoid offending China as its justification in a manner not so different from the KMT, as well as the fact that at times the DPP has been willing to disregard popular opinion to strong-arm measures into law in a manner reminiscent of the KMT. 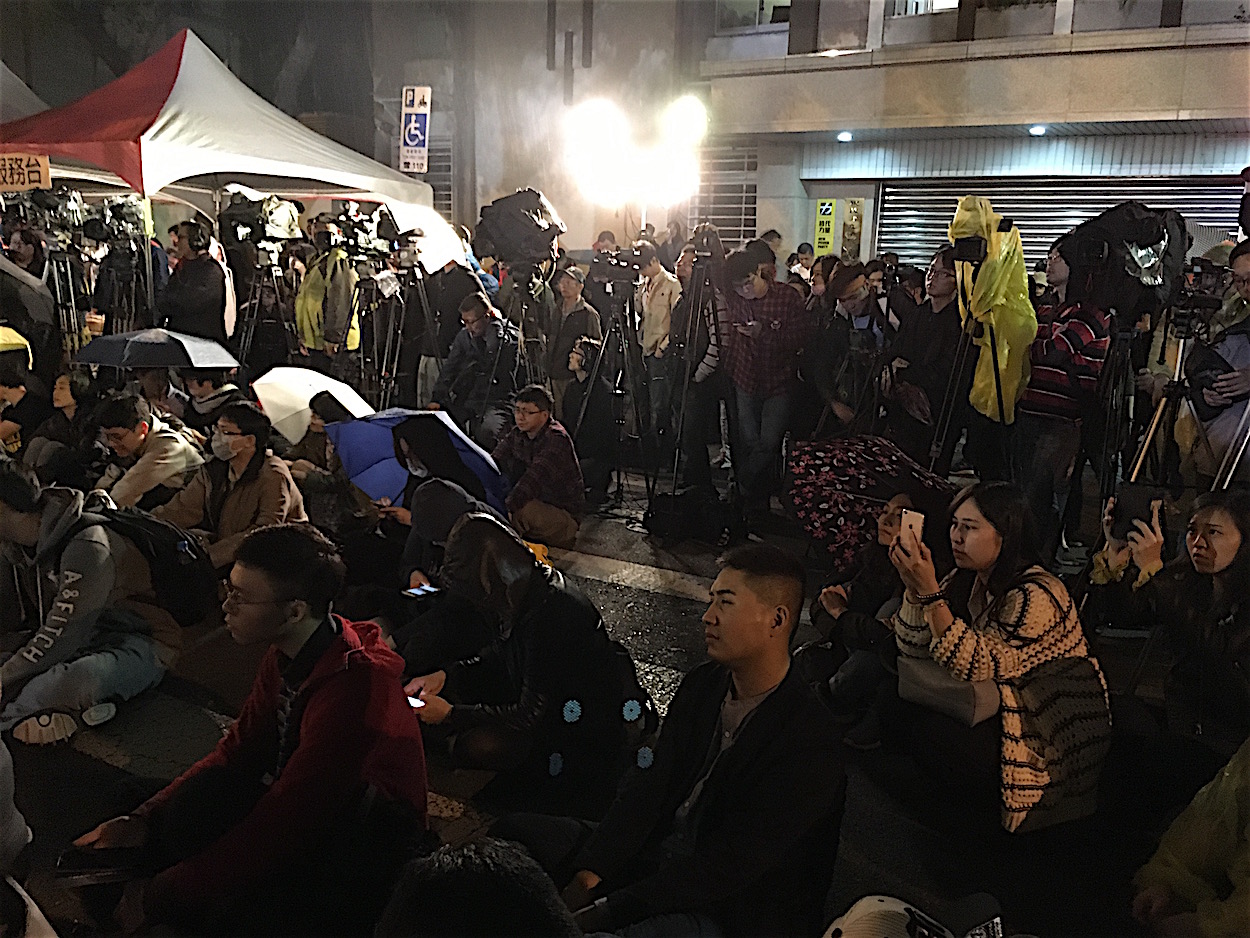 Indeed, the sharp criticisms of the DPP by Sunflower Movement activists three years later are proof the contrary of those who claimed in 2014 that the Sunflower Movement was simply orchestrated by the DPP from behind the scenes. Nevertheless, against the claim that Sunflower Movement activists are premature in their judgements of the DPP as no different from the KMT, and that their demands on the DPP are unproductive, maximalist claims, the DPP’s handling of the anniversary rally yesterday is revealing of why they would lose the support of Taiwanese youth activists. This would be through largely abandoning a constituency which had been crucial in putting them into power in 2016 presidential and legislative elections.

Namely, all parties present in the Legislative Yuan were invited to yesterday’s anniversary rally in order to respond to the demands of Sunflower Movement activists and engage in dialogue. The KMT and PFP refused to attend, for understandable reasons. Nevertheless, while the DPP sent a representative to the rally, that representative left after a short period of time. Only Huang Kuo-Chang of the NPP, who was at the time of the Sunflower Movement one of the occupiers of the Legislative Yuan, was present throughout the ceremony. 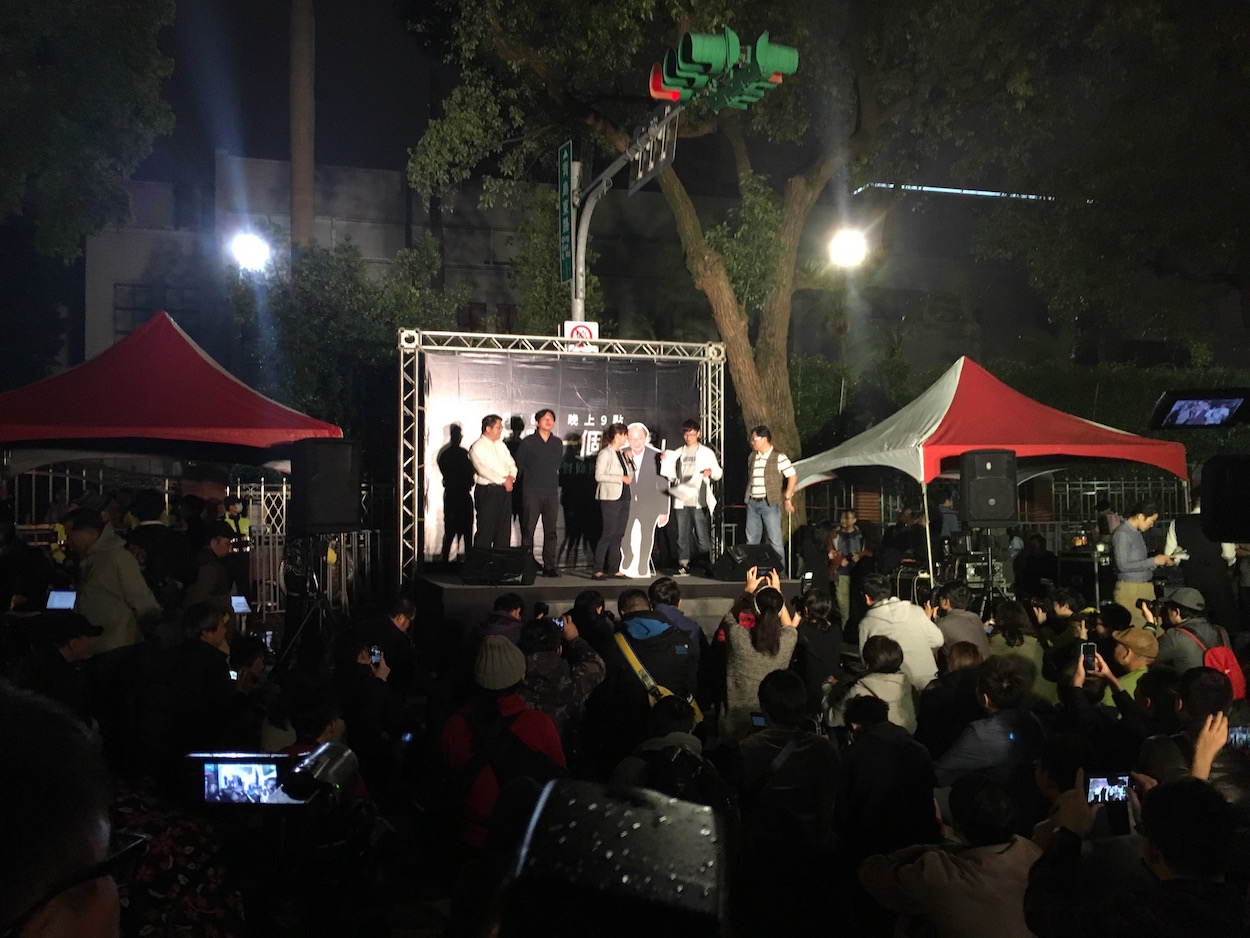 Huang Kuo-Chang onstage along with Lai Chung-Chiang of the Economic Democracy Union and a cardboard cut-out of Ker Chien-Ming. Photo credit: Brian Hioe

As a result, to the laughter of participants, when invited to the stage to engage in dialogue, Huang took the stage alongside a cardboard cut-out of Ker Chien-Ming, the DPP majority speaker, and a much hated figure within Taiwanese youth activism as a DPP legislator seen as willing to collude with the KMT in illicit matters and an emblem of DPP corruption more broadly. In his comments, Huang emphasized that his party would be steadfast in pursuing more accountable government, as well as that all members of government, including himself and other members of the NPP, should be subject to public oversight. Subsequently, participants symbolically tore up a sign representing the broken promises of the DPP, representing loss of faith in the DPP.

Before the rally broke, due to rain breaking out, participants were asked to write down on a piece of paper where they saw themselves in ten years time and put them into a box. Indeed, we will see what is the future of Sunflower Movement activists ten years down the line, with many high-profile activists currently planning on leaving Taiwan to study abroad and broaden their experiences for the sake of future activism. 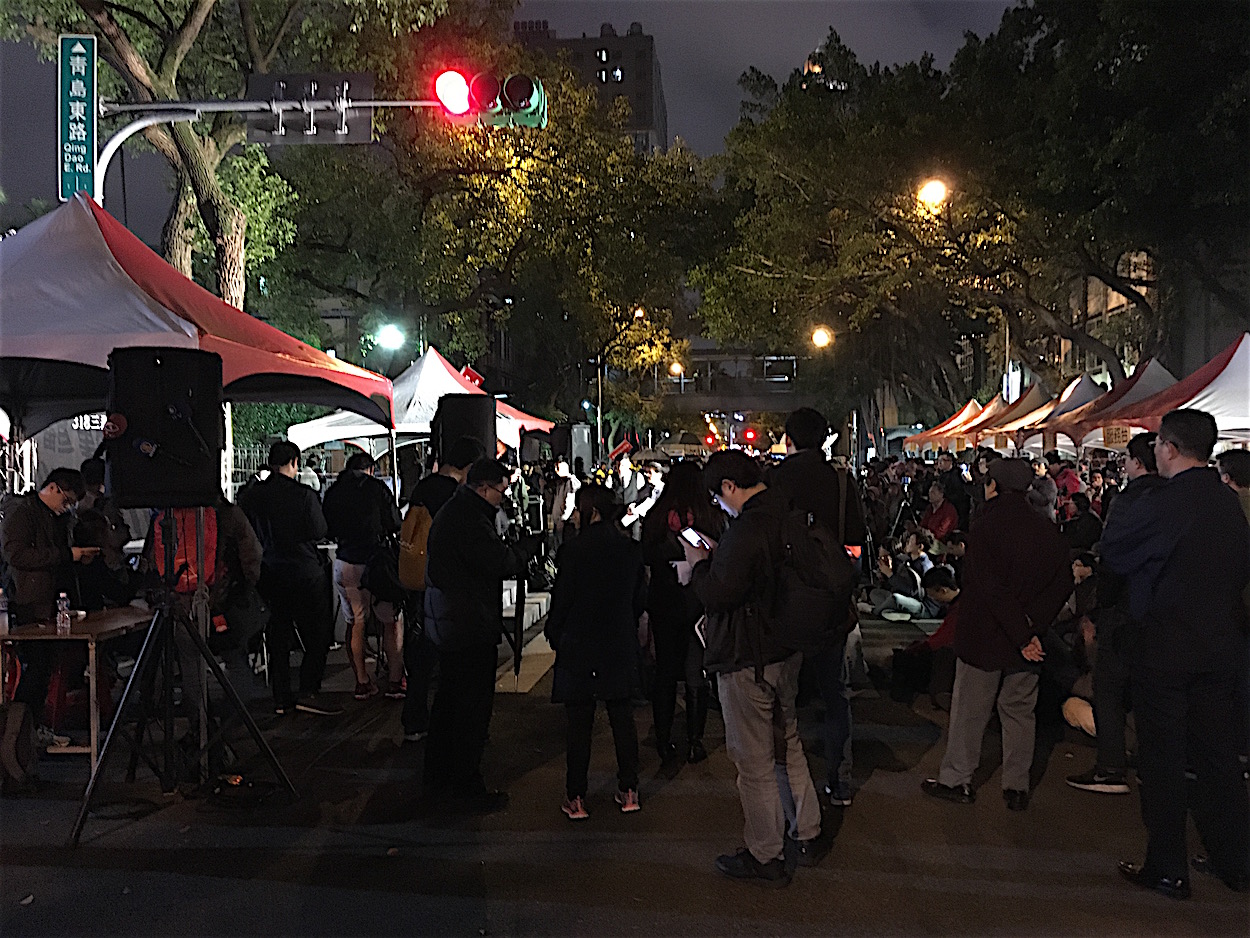 Nevertheless, what was also visible in yesterday’s rally was the declining participation in Taiwanese youth activist events. Past annual events which could draw thousands or even tens of thousands of individuals, such as the yearly 311 Fukushima commemoration rally or 228 commemoration event Gongsheng Music Festival, saw lackluster attendance. With the political transition of power between KMT and DPP and the current weakened state of the KMT, participation in youth activist events has noticeably dropped, because opposing the actions of the KMT no longer seems like such a priority. Perhaps, then, it is unsurprising that the DPP thinks that it can shrug off Taiwanese youth activism, which it may now regard as a peripheral political force.

But with the rapidly declining popularity of the Tsai administration among not just Taiwanese youth activists but the general public, a political storm may be on the horizon. 2018 legislative elections will be hotly contested, with the widening split in the pan-Green camp between the NPP and DPP that will likely bring Taiwanese youth activists into direct conflict with the DPP. Likewise, 2020 elections will be a verdict on the public’s views of the Tsai administration. 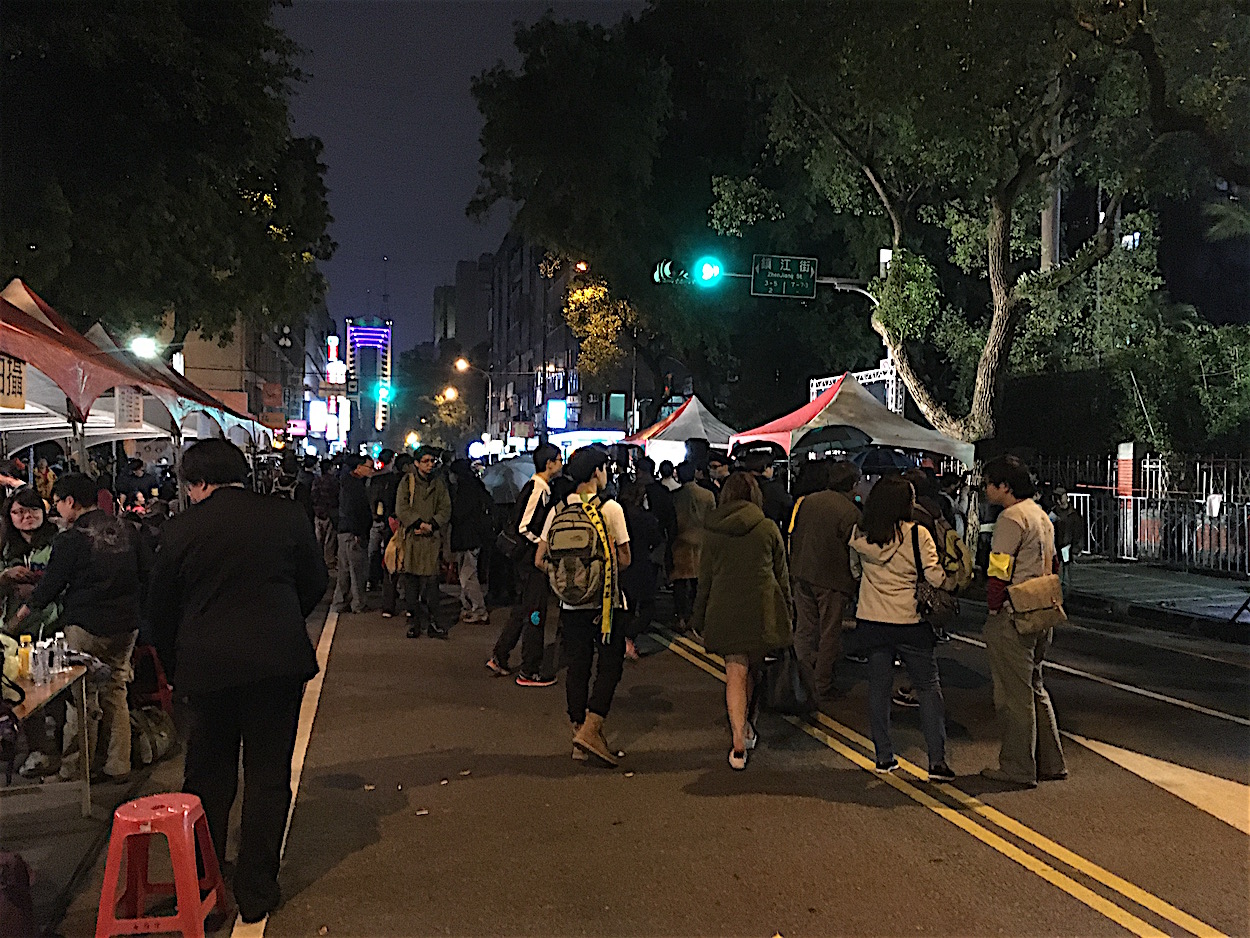 However unlikely due to the KMT’s ongoing, self-inflicted political crisis, there is also, of course, the possibility that the Tsai administration will alienate the Taiwanese public at large to such an extent that this will allow another KMT government to take power. If so, Taiwanese activists would once again find themselves in conflict with a KMT government. But to prevent such a possibility from coming to pass, the role of Taiwanese youth activists right now may actually be quite crucial, in preventing rising dissatisfaction against the Tsai administration and DPP from being channeled into support for the KMT, but into support for the NPP or other pro-Taiwan political parties.

And if there may be a decline in numbers as of late in youth activist events, that proves unfortunate, but it is necessary to soldier on. The importance of Taiwanese youth activism will not fade in safeguarding Taiwan’s democracy any time soon.