Why Have Some Queer Activists Taken A Stance Against Marriage Equality In Taiwan?

WITH MARRIAGE EQUALITY becoming a contested issue in Taiwan, it may be of surprise to some to note that some queer activists, particularly those affiliated with media outlet Coolloud, have stood out for their apparent opposition to marriage equality. Arguments offered include suggesting that there is an unresolved class dimension to marriage equality, with claims that only the wealthy can become married, that marriage equality would lead to the state enforcing queer sexuality, as well as suggestions that marriage equality is ultimately a distraction from larger, more significant issues at hand, such as that of class struggle.

Coolloud has itself been evasive, avoiding overt commitment to any specific position even while inserting sniping commentary directed at the marriage equality movement in their reporting on recent marriage equality rallies. But in consideration of some of the other stances that writers and activists associated with Coolloud have taken in previous years regarding issues such as independence/unification politics around the Sunflower movement, one sometimes wonders whether being contrarian to other social activists has become the main determinant of Coolloud’s politics. The point is not exactly to criticize Coolloud for its lack of solidarity with the tens of thousands in the streets demonstrating for marriage equality, but to point out that Coolloud seems moreso to be interested in being contrarian for its own sake, rather than undertaking any engaged critique. 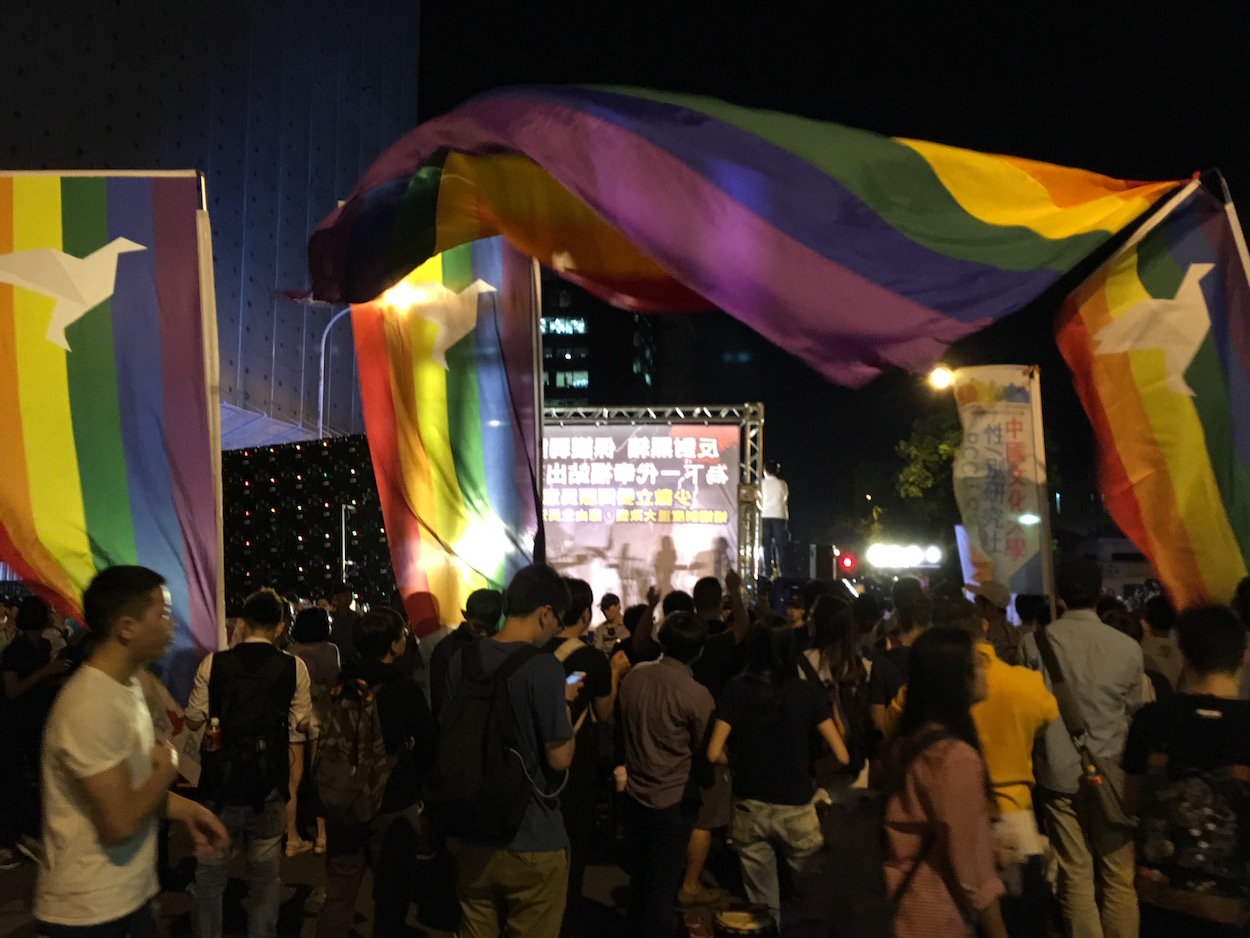 At times, Coolloud has attempted to mechanistically import critiques of institution of marriage into Taiwan from foreign countries as the United States in order to suggest that their stances are widely accepted by queer activists in an international context. But given Coolloud’s tendency to loudly criticize western imperialism (almost always American imperialism) as a critique of Taiwanese independence activists while at the same time citing western academics or activists (almost all Americans) as holy writ and mechanistically seeking to import western theory into Taiwan (again almost all American in origin), one can also suggest that Coolloud is simply attempting to scare Taiwanese queer activists pushing for marriage equality into silence by citing the oh-so-mighty authority of western theory.

Oftentimes one simply has the sense that Coolloud members like to snipe at social movements simply out of a sense of elitism, to derive a sense of satisfaction from how much smarter they are than other participants in social movements. Or it could be that because of its pro-unification politics, Coolloud cannot stand how largely pro-independence Taiwanese youth activism has jumped onto the issue. Nevertheless, we might engage with some of these criticisms, as they appear in recent Coolloud pieces engaging with marriage equality rallies, seeing as there are sometime valid points to be derived from Coolloud and others’ criticisms.

As many critics point to, is indeed correct to see marriage as a bourgeois institution, with origins in patriarchy. Marriage was historically the ownership of women by men, whether under capitalism or preceding socioeconomic systems. In this way, liberal discourse about the sanctity of marriage does in fact, serve as apologist for what is fundamentally a conservative social institution. The institution of marriage—as well as the related institution of the family—has its foundations in heterosexual patriarchy. 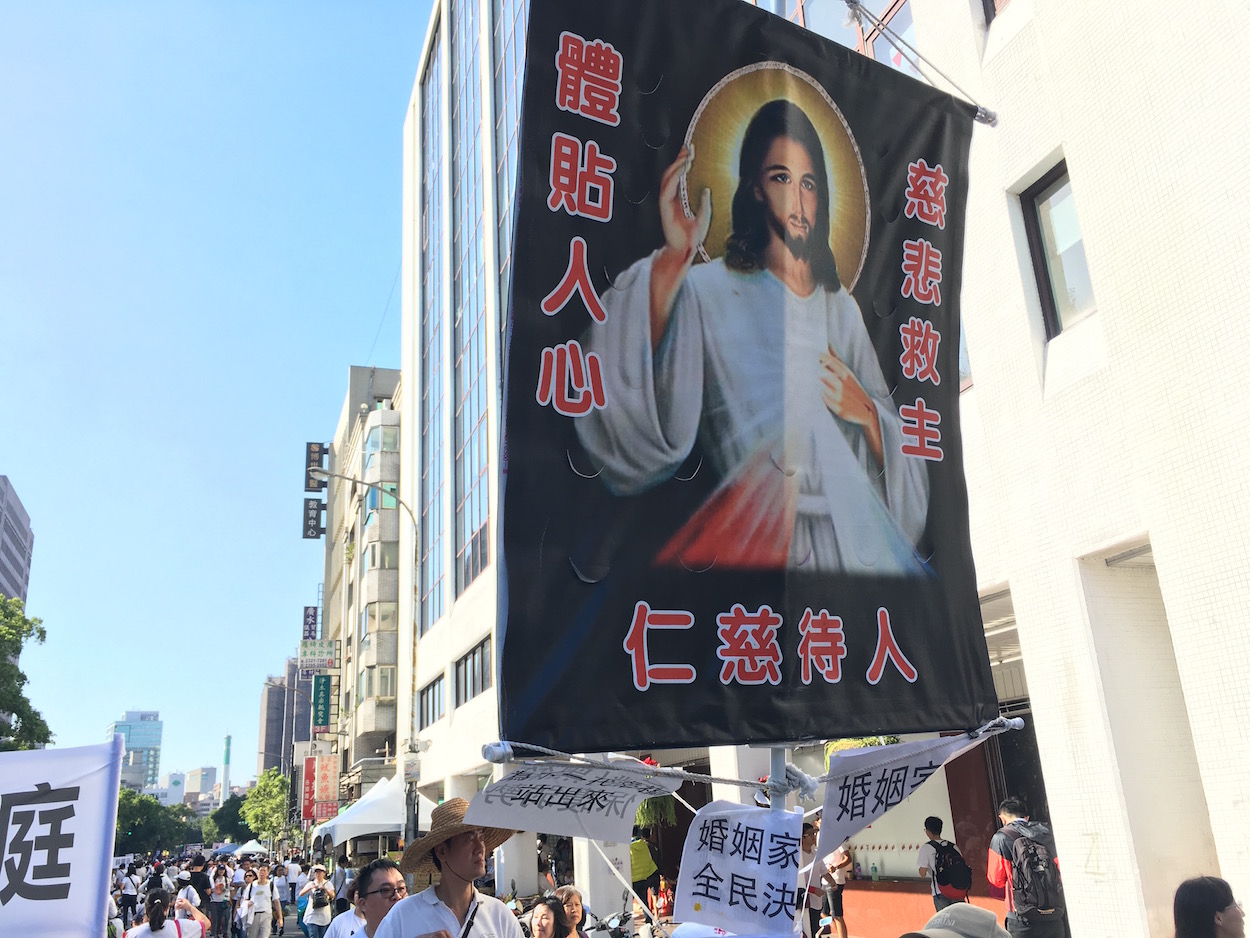 However, the institution of marriage is not going away soon, and in the meantime, that LGBTQ individuals are denied the rights of marriage is a material and juridical form of discrimination against them. Claims that only the wealthy can get married and that marriage equality will reinforce this among queers seems to suggest that marriage consists solely of expensive wedding ceremonies and that marriage equality activists simply are demanding the right for gay people to have flashy wedding pictures which they can post on Facebook and taking to the streets in the tens of thousands to fight for their right to do so.

Likewise, when Coolloud suggests that demonstrators for marriage equality are forcing queer identity to conform to patriarchal, capitalist notions of the family, we might ask, who exactly is doing this? Nobody is claiming that all LGBTQ individuals must get married after the passage of marriage equality, but suggesting that the fact that they are denied the rights to get married is a product of social discrimination against queers. Most bizarrely, Coolloud has resorted to taking seriously the claims of anti-gay groups as the Protect The Family Alliance in order to argue that in some backwards way they capture some truth about the discourse of marriage equality groups, rather than these simply being an object of the Protect The Family Alliance’s own infantile projections onto queers. In doing so, this is probably revealing about members of Coolloud’s own projections onto the marriage equality movement.

The marriage equality movement is hardly so domineering, whether in regards to the regulation of queer sexuality or attempting to bring queer sexuality in line with heterosexual sexuality. Indeed, as for the critique that legalizing gay marriage brings queer sexuality under the authoritarian rule of the state, we do well to keep in mind the reality of there are very real-world effects of LGBTQ individuals being denied the rights of married heterosexuals. Because of this fact LGBTQ individuals being denied the material and juridical benefits that heterosexual couples are allowed. The apparent suicide of Jacques Picoux is one example, seeing as his death was partly a product of that he was not allowed the rights to visit his dying partner, nor was his partner allowed to will his belongings to Picoux in his will. This occurred because Picoux lacked the juridical, legal, and material status of marriage with his partner, Zeng Jingchao. 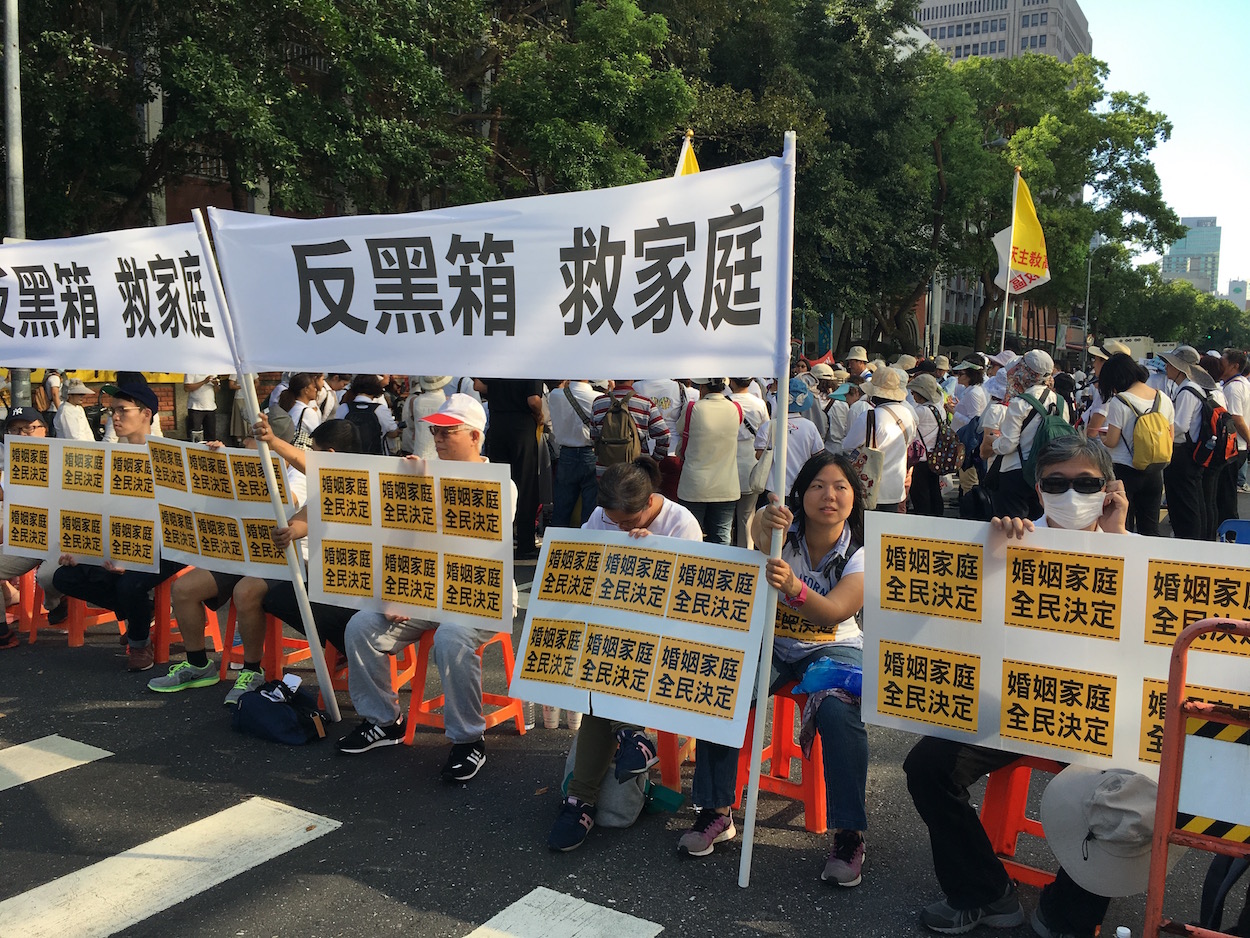 It is true that, in the end run, we should advocate that the state stays out of the bedroom, period, regarding the regulation of sexuality, but as long as gay couples are denied the legal rights that come with marriage and the institution of marriage is not going to be abolished anytime soon, these kinds of situations will continue to happen. Certainly, there is the aspect of marriage which is highly class-based because of the amount of capitalist pageantry which surrounds the institution of marriage, but situations such as those faced by Picoux and Zeng can be avoided simply if the two had been able to go before a judge and become legally married after paying a relatively inexpensive fee for a marriage license. This should be an example illustrating that LGBTQ individuals can be driven to commit suicide as a result of their lack of rights in the present. It is not surprising, then, why tens of thousands in Taiwan would be motivated to demonstrate over this issue.

To claim that gay marriage should not be legalized because marriage is an oppressive institution which should be done away with in the long run is a misnomer. The eventual abolition of the institution of marriage is not incommensurable with making a flawed institution more equal, in the way that reform and revolution are not opposites, but the former can pave the path for the latter. To claim otherwise oftentimes is simply a form of ultra-leftism which returns us to idealism in failing to understand the relation between ends and means, with abstract philosophical or theoretical ideals taking precedent over material realities of life under capitalism. 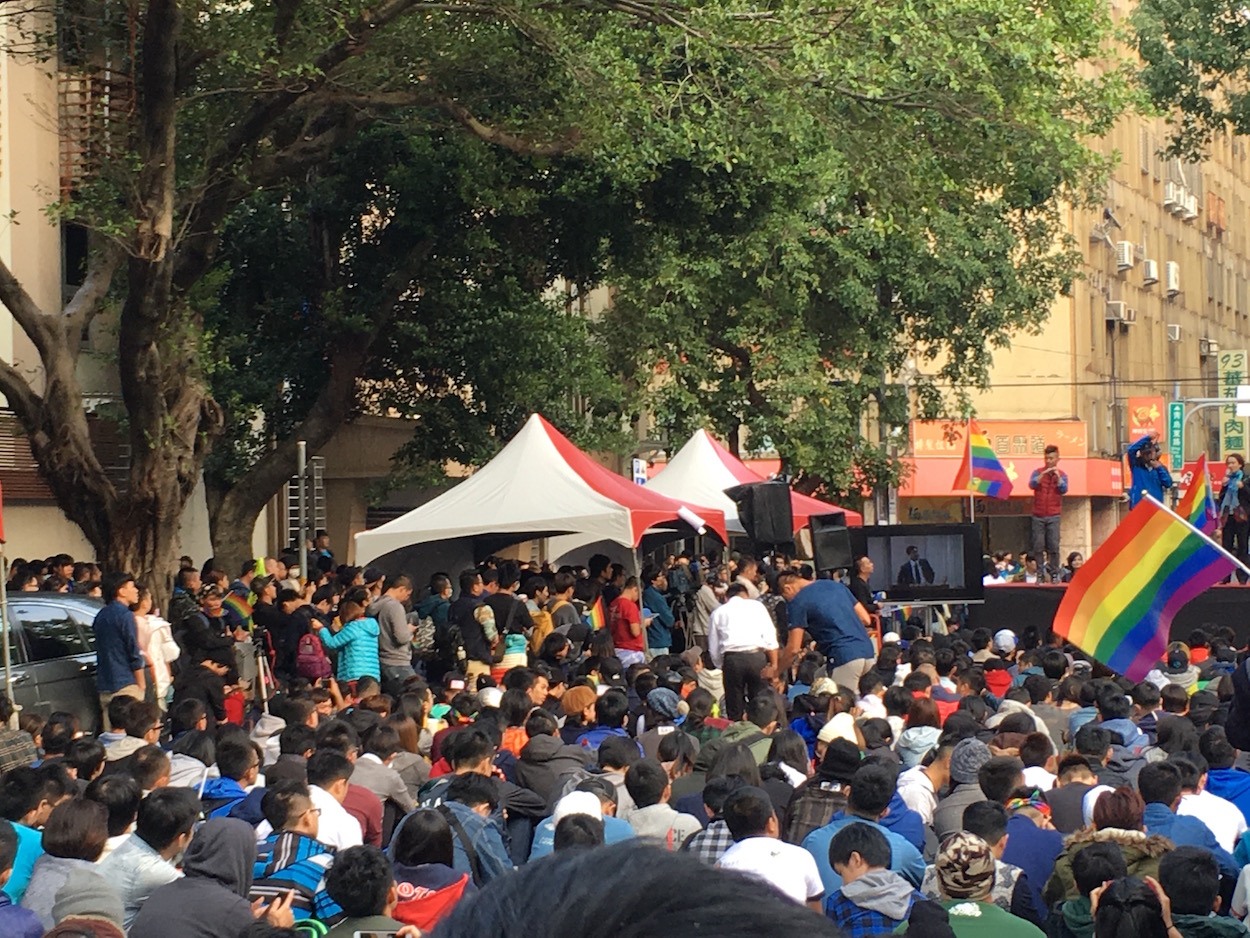 For example, in consideration of the flaws of capitalist democracy which remain to this day, seeing as democracy is far from fully realized, would it have been a waste of our time to push for allowing women the right to vote until the day that capitalism is overturned? We might argue similarly regarding that LGBTQ individuals are denied the rights of marriage.

More reasonable are claims by Coolloud that individuals who do not want to be married deserve the same rights as those who are married, in consideration of the flawed nature of the system of marriage. This is absolutely so. However, it often is the case that the stance Coolloud seems to be take is opposition to the legalization of gay marriage altogether.

Nevertheless, such are the problems of ultra-leftism. And this is a classic case in point regarding the assertions that Coolloud and others have made about marriage equality in Taiwan, which disregard material realities in favor of abstract theoretical ideals, and adhere to a mechanical conception of political change which demands all or nothing. To put it in stark terms, is it that at the end of the day, Coolloud would rather that LGBTQ individuals continue to be denied rights, even when this leads to tragedies such as that of Jacques Picoux and countless, untold others?