A Defeat For Taiwanese Labor After A Year Of Struggle?

LABOR GROUPS suffered a defeat yesterday after the passage of planned labor reforms by the Tsai administration. These reforms will cut seven public holidays and allow workers one set day off per week and one “flexible rest day” on which workers can still be forced to work. Workers have been demonstrating for over a year calling for a reversal of planned holiday cuts and for workers to be granted two set days off per week, seeing public holiday cuts as unjustifiable given that Taiwanese workers already work some of the longest hours in the world. Worse yet, the DPP’s attempt to remove the proposed addendum of Article 78-1 means there could be low fines for companies that break labor regulations, meaning that labor reforms will be only be weakly binding and companies can violate the Labor Standards Act with minimal legal punishment.

The passage of changes to the Labor Standards Act ends a struggle which has gone on for months within legislature. Demonstrations go all the way back to the 2016 election campaign season and have mobilized thousands, including attempts to storm the Legislative Yuan and Ministry of Labor, and two hunger strikes, the latter of which of which approached eight hundred hours in length. Protests were primarily organized by the Worker’s Struggle collective of labor unions, which had organized demonstrations regarding the issue in the months leading up to 2016 elections in anticipation of both a DPP victory and expectations that the DPP would stall on the issue. 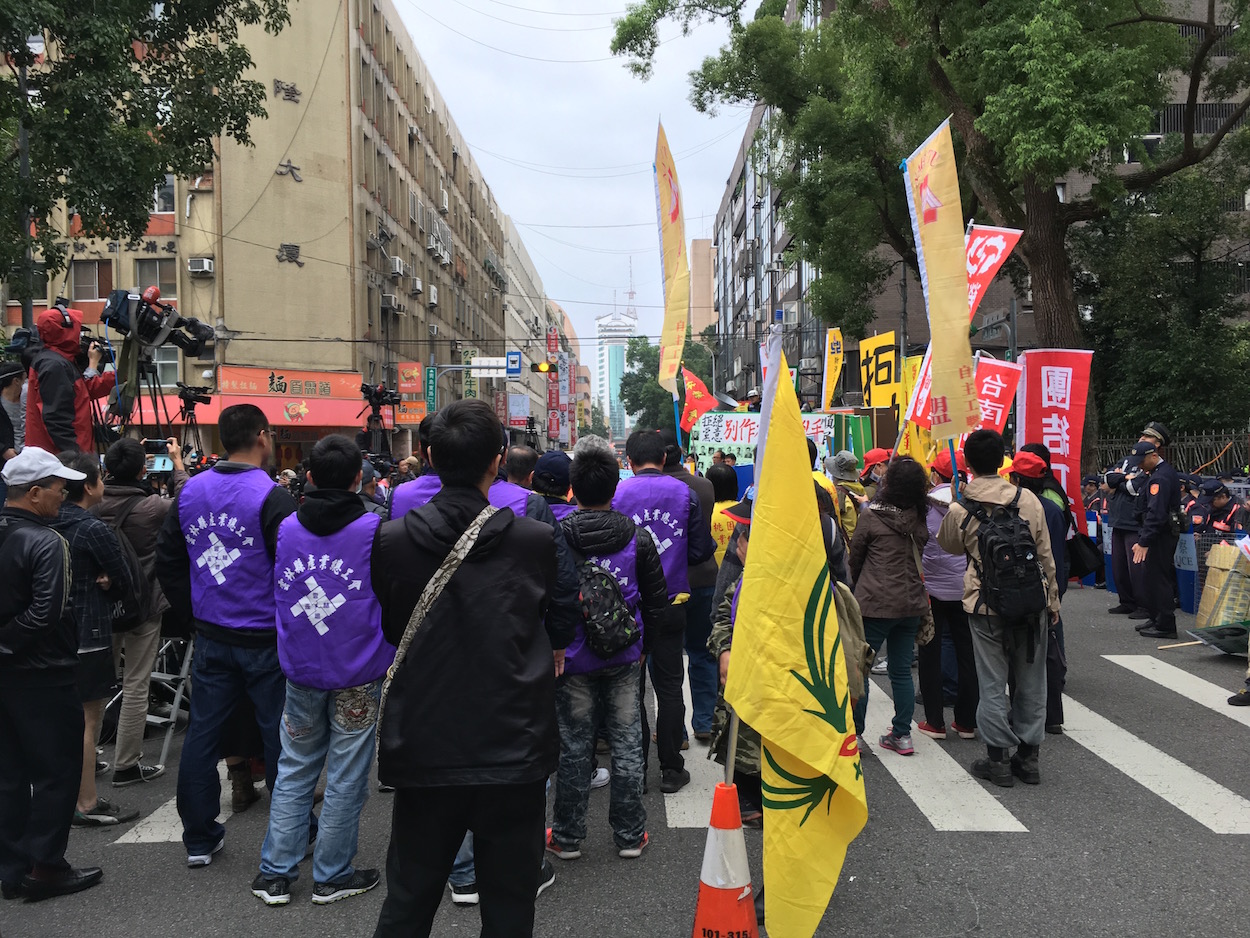 DPP partisans have sometimes claimed that Worker’s Struggle is being manipulated by political forces hoping for the DPP government to fail, such as the KMT. Members of the unions that comprise Worker’s Struggle, however, emphasize that they have worked with the DPP in the past under a KMT-led government, but the DPP has failed to distinguish itself from the KMT once in office. Likewise, many post-Sunflower movement youth activists who previously demonstrated against the undemocratic actions of the KMT when it controlled the legislature and presidency are members of Worker’s Struggle or participate in demonstrations organized by Worker’s Struggle. 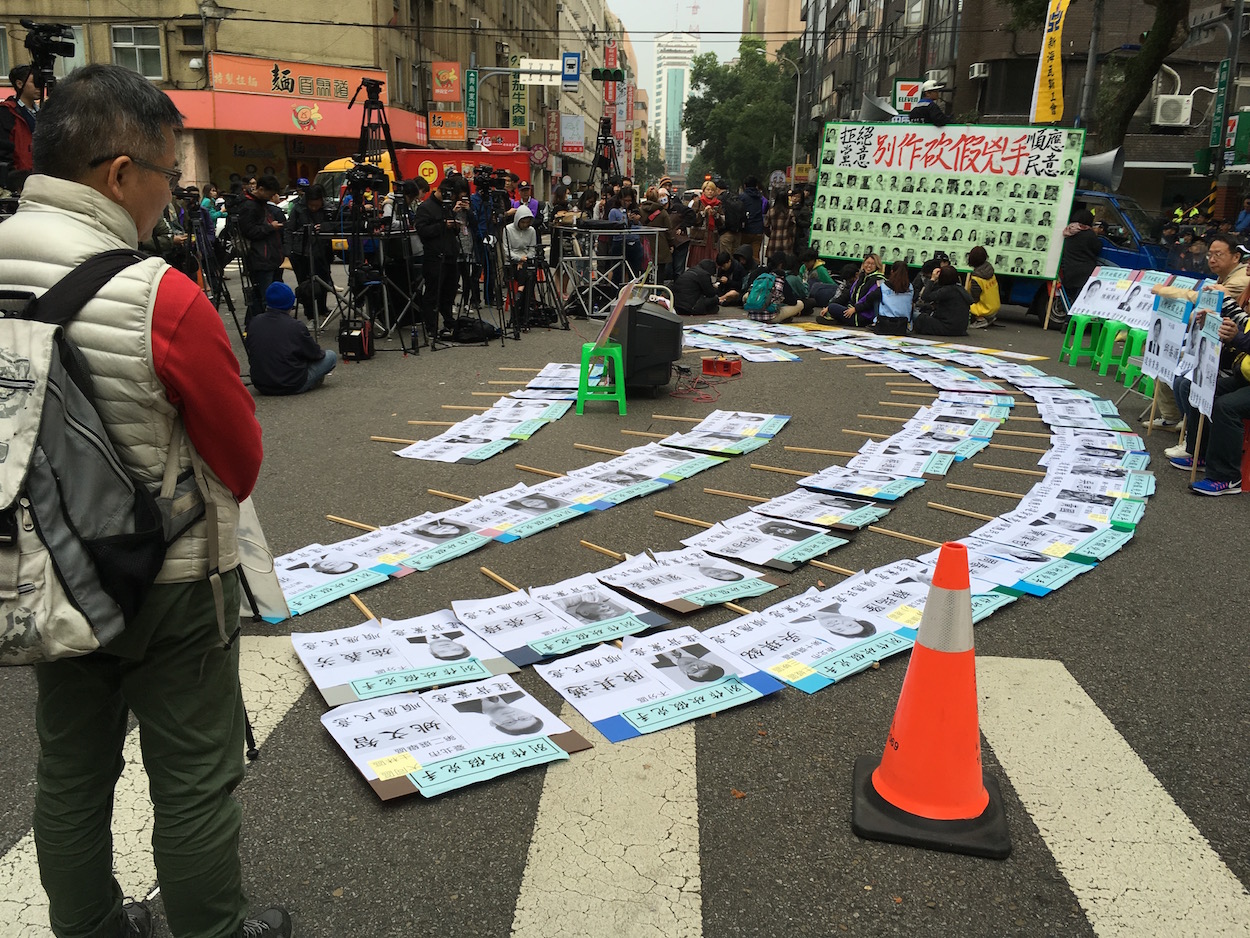 In the past week, Worker’s Struggle had drawn controversy for an incident in which DPP majority speaker Ker Chien-Ming was physically attacked, but have claimed that changes to the Labor Standards Act would be an act violence to workers through the government standing on the side of capitalists rather than the workers of Taiwanese society. What has particularly enraged the Worker’s Struggle is that the Tsai administration previously backed down from labor reforms after the Worker’s Struggle’s first hunger strike. However, after Taiwanese industry leaders’ objections, the Tsai administration reversed course, resorting to tactics such as last minute relocations of meetings within the Legislative Yuan to push through labor reforms and get around the objections of NPP or KMT legislators which had stalled the labor reform bill many times in the past. Some have compared the actions of the DPP to the KMT’s attempts to force the CSSTA through legislature in the series of actions which provoked the Sunflower movement’s occupation of the Legislative Yuan. 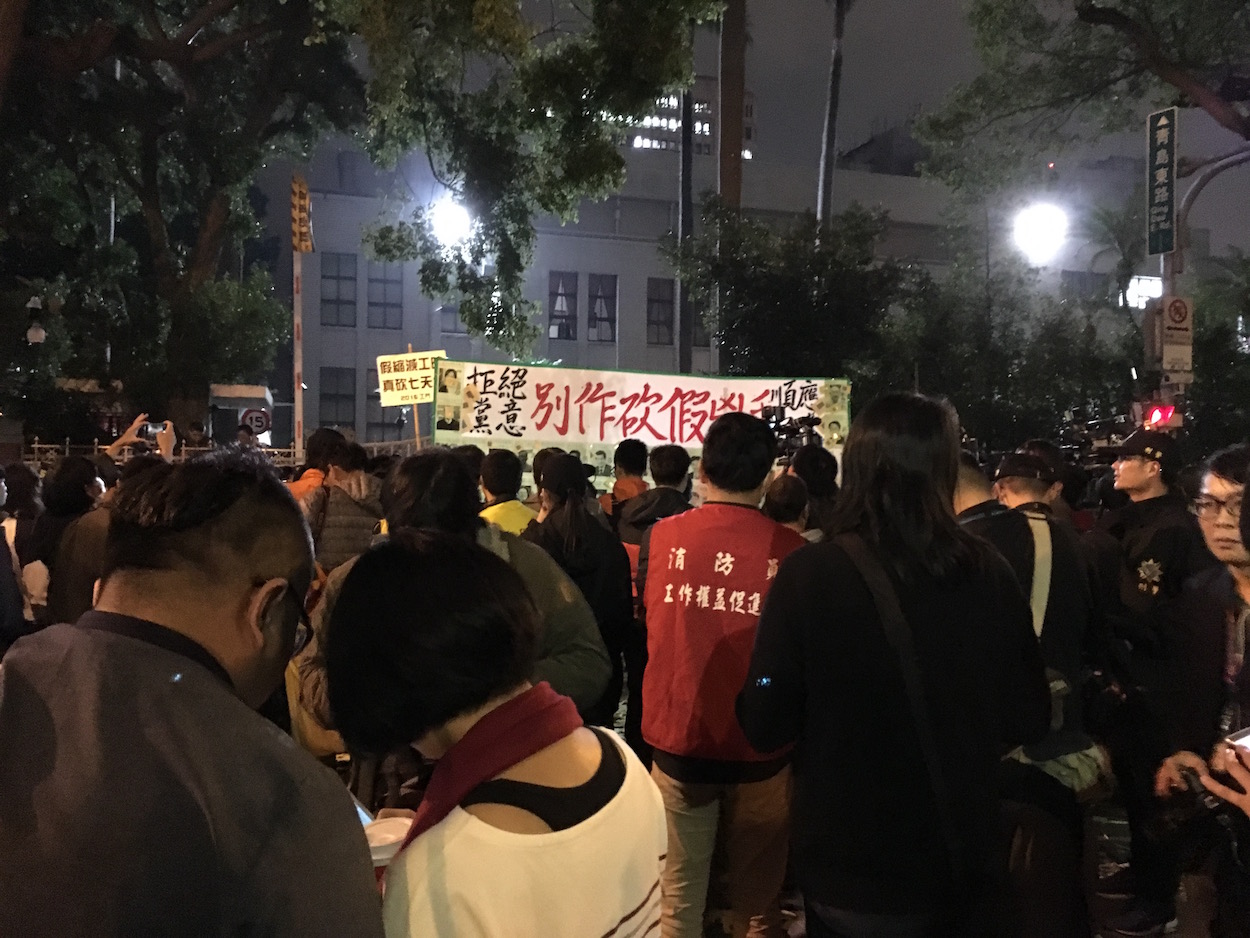 As last show of force, labor groups demonstrated outside the Legislative Yuan beginning from 9 AM today until approximately 9 PM. The demonstration saw clashes with the police and smoke bombs thrown at the Legislative Yuan. Demonstrations also held a ceremonial funeral for the “death of democracy”, regarding the DPP’s disregarding popular sentiment in pushing labor reforms through legislature, burning ghost money and an image of Tsai Ing-Wen’s campaign logo. Reportedly, over 1,000 riot police were mobilized to contain protestors, although demonstrators probably did not number much over one hundred in number.

Fighting also broke out between DPP and KMT lawmakers within legislature, leading to the hospitalization of one KMT lawmaker. The KMT has opportunistically latched onto labor issues as a way to target the DPP government, in order to pose as the defender of workers in legislature. Of course, the KMT attempted to crack down Taiwanese labor as a potential threat during its period of one party rule, and labor groups previously demonstrated against the KMT when it controlled the presidency and legislature.

On the other hand, after the passage of labor reforms, the NPP issued a press release apologizing for its failure to halt the labor reforms within legislature and criticized the DPP’s actions of pushing through the labor bill through its majority in the Legislative Yuan while stalling on issues as marriage equality. The reforms to the Labor Standards Act likely represent a major rupture between the NPP and DPP, who are off-and-on political allies within the pan-Green camp. Ker Chien-Ming lashed out at the NPP, claiming that the NPP was orchestrating labor protests against the DPP. 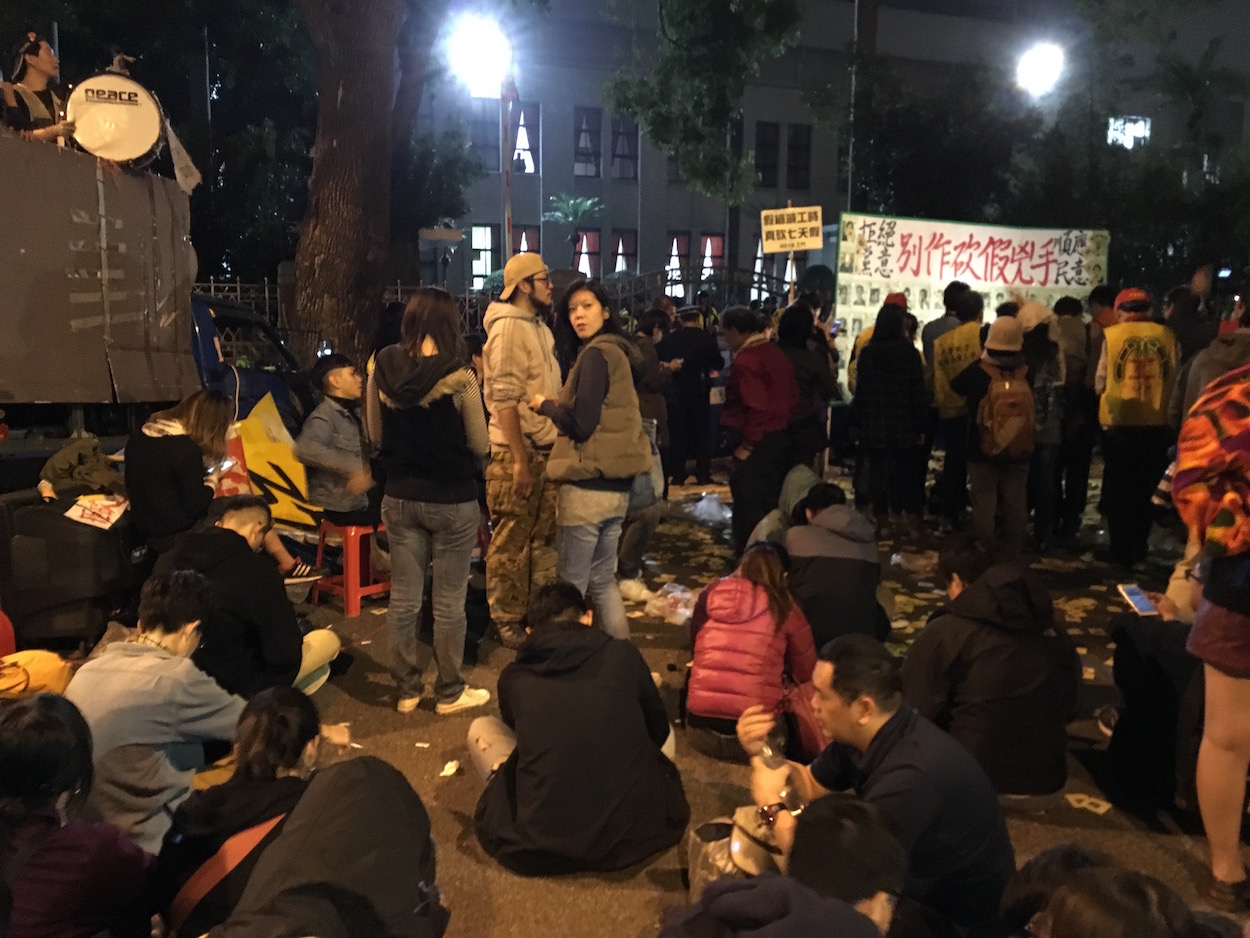 Indeed, as pointed out by labor groups, the DPP’s actions on labor reforms have been anything but “democratic” or “progressive”, with the DPP standing on the side of capitalists rather than with workers, and the DPP quite undemocratically accusing protests against it of being secretly orchestrated by its political rivals, whether KMT or NPP. After years of the KMT claiming that any and all political opposition to it was secretly orchestrated by the DPP, something reflective of the undemocratic nature of the KMT and its inability believe that grassroots sentiment might turn against it, the DPP has acted no differently in power by refusing to seriously engage with grassroots opposition to its policies.

What happens next for Taiwanese labor is up in the air. Organized labor in Taiwan has suffered a major setback, with a defeat after over a year of struggle. Near the end of demonstrations, union groups may have been running out of tactics, with repeated use of hunger strikes and continued marches. Perhaps too much rested on attempting to appeal to popular sentiment and hoping that this would force the DPP to reverse course, as occurred with the China Airlines strike and the Tsai administration’s backing down from labor reforms following Worker’s Struggle’s first hunger strike.

There is no doubt that resistance will continue, but in what form remains to be seen. The relationship between the Tsai administration and organized labor will continue to be an uneasy one.