DESPITE CHILLY weather and drizzling rain, 80,000 would march on the streets of Taipei for Taiwan LGBT Pride 2016 earlier today. The march began and ended at Ketagalan Boulevard, in front of the Presidential Office Building, marching past National Taiwan Normal University, the Chiang Kai-Shek Memorial, and other Taipei landmarks. This was the 14th time Taiwan LGBT Pride was held, the annual event being East Asia’s largest pride parade. Taiwan LGBT Pride is organized by Taiwan Rainbow Citizens Association, working together with other groups. This year was marked by higher participation by corporations as Uber, CitiBank, and others than in past years, however.

The theme of 2016’s parade was, “Let’s have fun together, to break through false friendliness, so we can be free together” (一起FUN出來——打破「假友善」，你我撐自在). This was a theme chosen to represent that there are many problems which continue to be faced by LGBTQ individuals in Taiwanese society, in spite of the perception that these problems have been largely resolved, or that Taiwan has it better than many other East Asian countries because of its relatively tolerant social attitudes towards LGBTQ individuals. Indeed, representatives of other Asian pride parades, such as from Hong Kong, South Korea, and Japan, were present at the event. 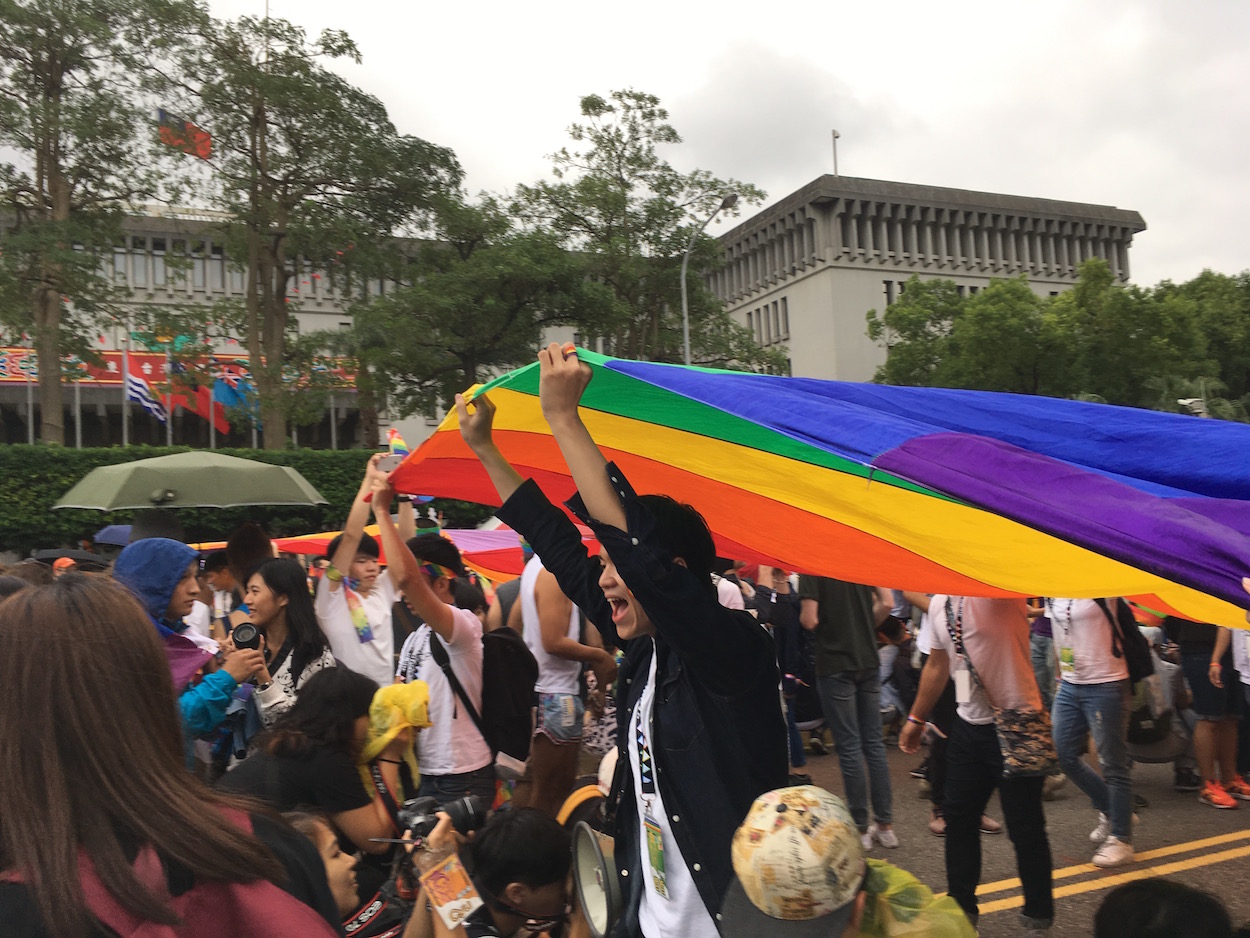 At stake would also be that Taiwanese president Tsai Ing-Wen has vowed to legalize gay marriage, but since being elected, has not pushed very hard on the issue and has generally refused to comment on the issue. This has led to backlash against the Tsai administration because of the perception that she made such campaign promises in order to lure in gay voters and their allies, but had no actual intention of legalizing gay marriage. This morning, Tsai would release a public statement on her Facebook stating that she believed that marriage equality would be realized soon, and calling on the public to continue to have faith. Rumors that Tsai would be making a surprise appearance at the pride parade itself, as she has in response to several past protests against her administration’s backsliding on campaign promises, proved to be false.

Indeed, it is to be questioned whether Tsai Ing-Wen genuinely intends to push for marriage equality, rather than for civil partnerships. In spite of widespread social support for gay marriage, which has only increased in recent years, Tsai may view the issue as too controversial to push for currently because of its risk to offend influential political figures. Even within her own party, elements of the DPP tied to the Presbyterian church have expressed homophobic sentiments many times in the past. For example, former vice president Annette Lu, who is fond of declaring herself the “founder of Taiwan’s feminist movement,” in the past has declared AIDS to be the “wrath of God” against gay people. 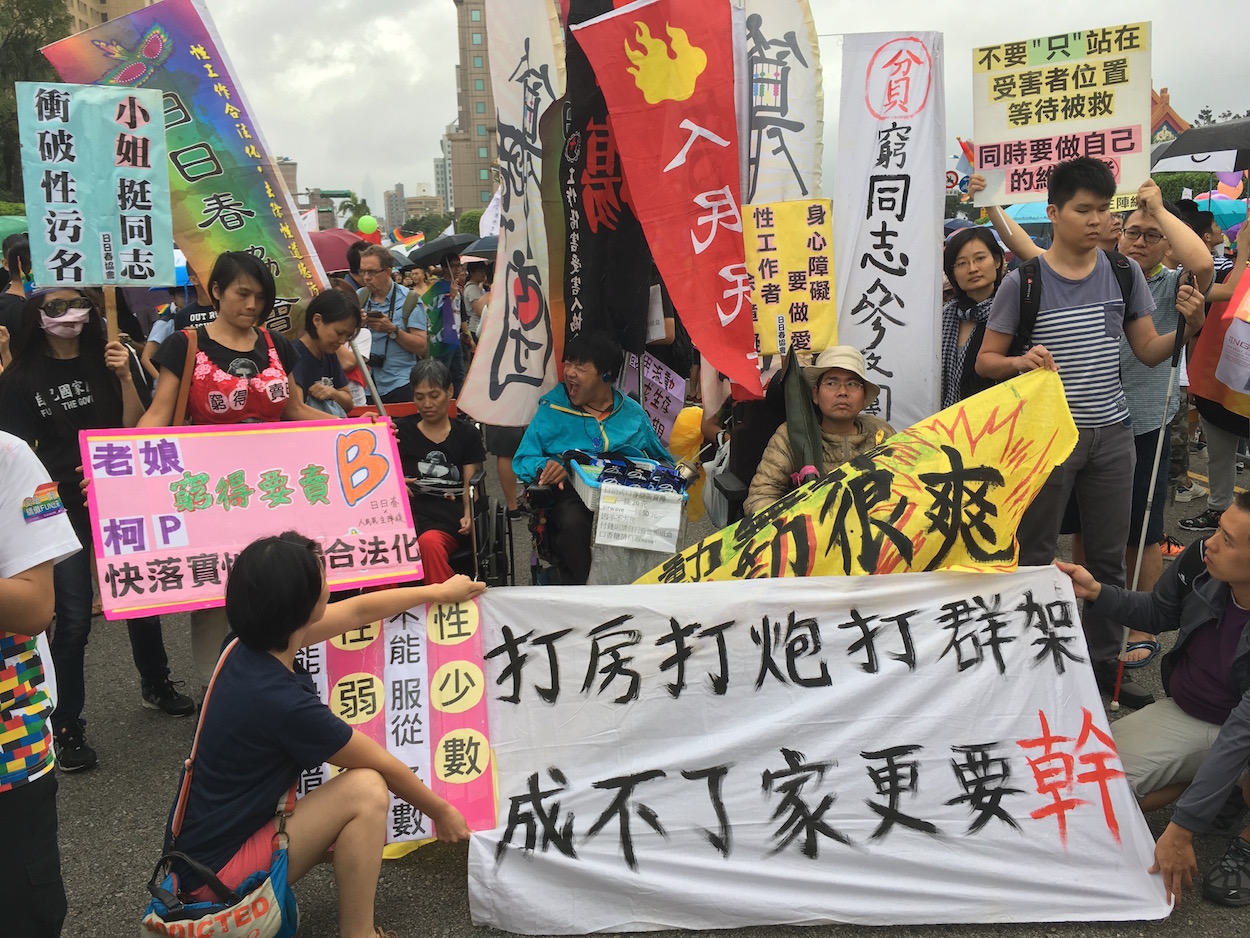 Certainly, the KMT’s record stands even worse on the issue, with many anti-gay marriage protests in recent years having been organized by church groups with ties to the KMT. Indeed, while a number of DPP legislators participated in the pride parade, including Su Chiao-Hui, Cheng Yun-Peng, and Kolas Yotaka, of the KMT, only one KMT legislator, Jason Hsu, was in attendance. On the other hand, third parties as the New Power Party, Social Democratic Party, Green Party, and Free Taiwan Party were openly supportive of gay marriage and were present in force at the pride rally, joined by civil society groups such as Taiwan March and the Appendectomy Project. This is not surprising, given the younger composition of these parties, and because the young tend to be much more supportive of gay marriage than older individuals.

That the Tsai administration could come out into the open with a public stance of supporting gay marriage reflects that support of gay marriage is increasingly a safe political position to take in Taiwan, particularly in making outreach to the youth vote. But if Tsai was not simply making false campaign promises about gay marriage she had no intention of keeping, it is possible that internal opposition within the DPP was what led her push for gay marriage to ground to a halt. It is also possible that Tsai may be seeking to put off the issue until her second term, seeing as she has a number of widespread reform measures on her plate including transitional justice legislation, addressing KMT party assets, labor reforms, and judicial reform, and she may see the issue as too much to push for during her first term. The DPP is increasingly embattled on these issues; during just the pride parade itself, at one point, DPP legislators were surrounded by protestors against planned cuts to public holidays and the labor policy of “yili yixiu” calling for workers to have one set day off per week and one “flexible rest day” rather than two set days off. 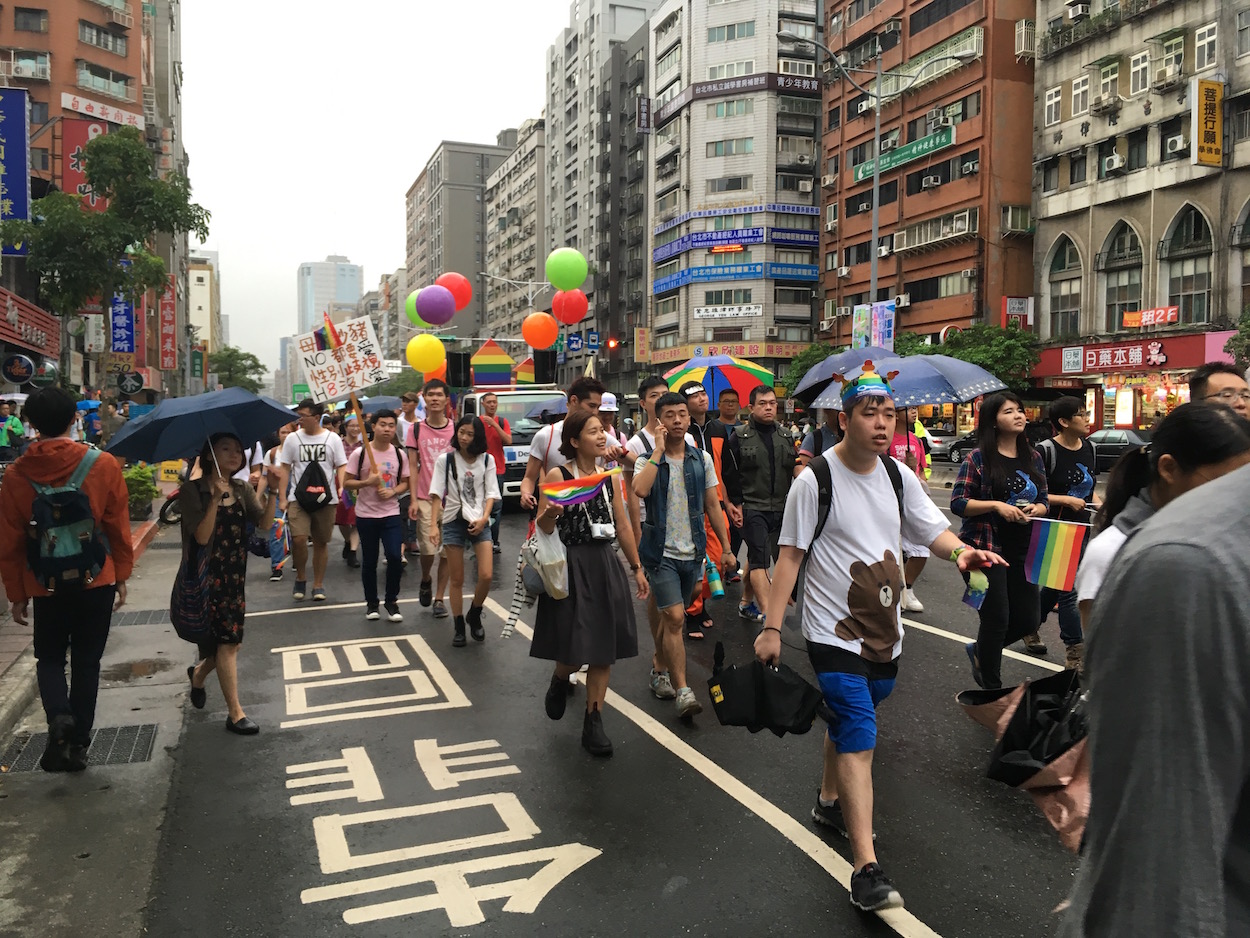 Or Tsai may be hoping to lure in gay voters again during her second term with promises of legalizing gay marriage. This, of course, leaves Tsai open to the accusation that she is politically manipulating supporters of marriage equality. In particular, outrage has recently been provoked by the apparent suicide of a French professor, Jacques Picoux, which is seen as having been caused by Picoux not being allowed to visit his partner on his deathbed or participate in any medical decisions regarding his partner due to his inability to marry his partner and obtain the rights that would have come from legal marriage status. Picoux’s death has led to renewed calls upon the Tsai administration to live up to its campaign promises and accusations that the Tsai administration has been moving too slowly on the matter.

Certainly, it may be that the tide is turning in Taiwan. The legalization of marriage equality in America has been a watermark for the LGBTQ movement worldwide, in large part because of the powerful global influence of the United States. This is particularly true of countries with strong political ties to the United States such as Taiwan. Taipei mayor Ko Wen-Je previously stated that he would consider supporting marriage equality once half of the states in the US had ratified marriage equality, but gay marriage was legalized overnight across the United States after the Obergefell v Hodges decision by the Supreme Court in June 2015. Ko would later officiate over a mass wedding of 123 couples, which included eight gay couples, and the Taipei city hall would display a rainbow colored flag today. 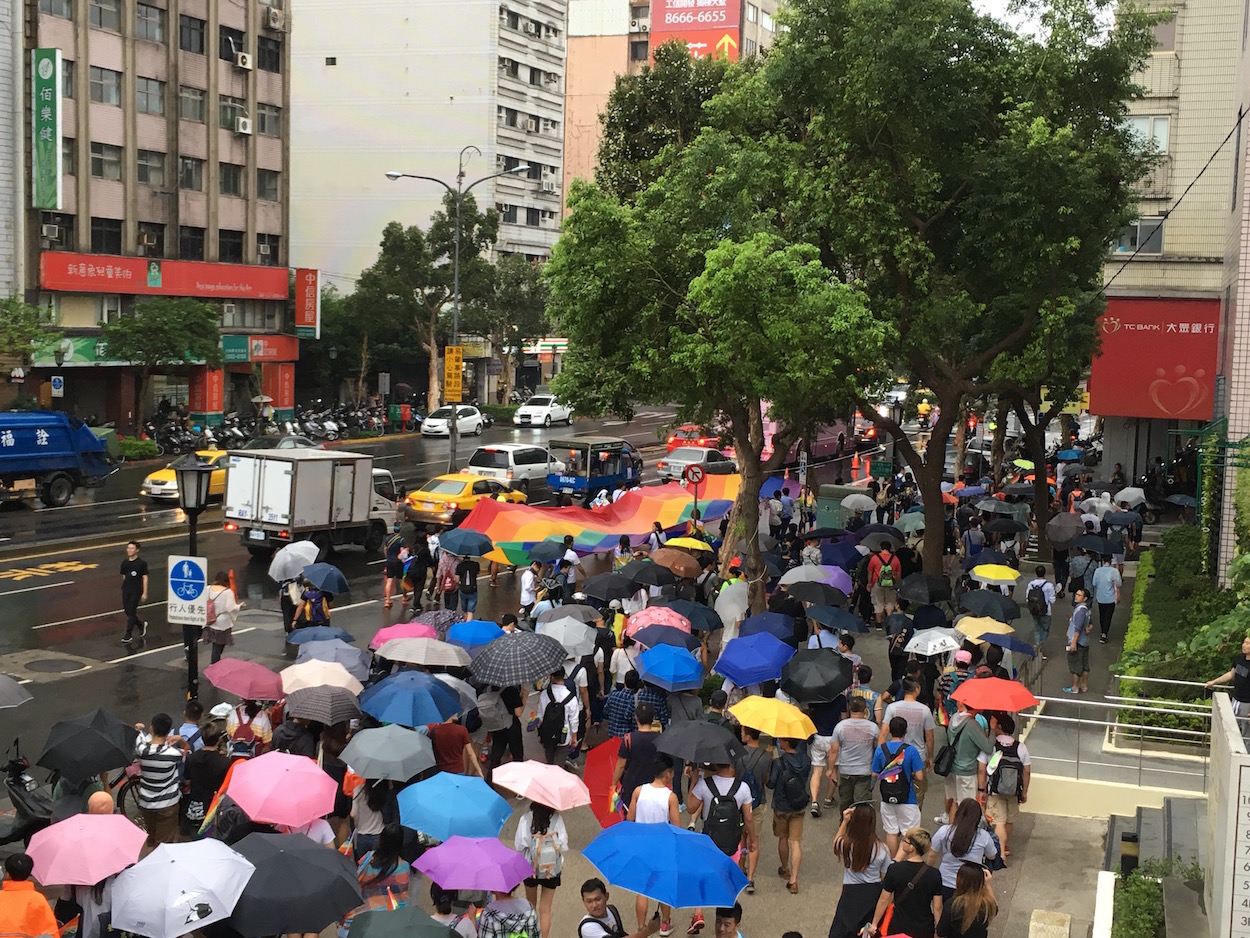 But it remains to be seen as to the future of marriage equality in Taiwan. Can the Tsai administration truly be counted on? Blind faith in the Tsai administration, whether on the issue of gay marriage or other social issues, is generally unwarranted. And, as was pointed out during the rally today, it is not as if the inability of gay people to marry is the only social ill facing LGBTQ individuals, given continued attitudes of discrimination in society and social inequalities disproportionately confronted by LGBTQ individuals. These problems, too, remain to be resolved and this is what perhaps should be taken away from Taiwan LGBT Pride 2016, as an event which seeks to raise the visibility of LGBTQ individuals in Taiwanese society.